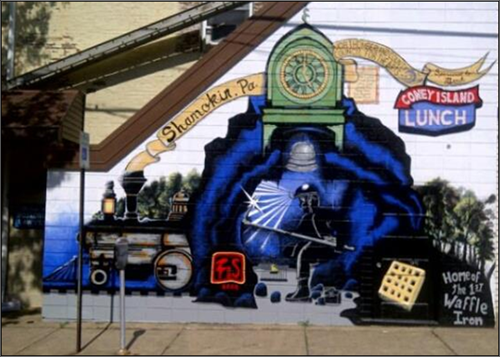 Shamokin will pay homage to its connection to an international food favorite on Saturday with its first Waffle Fest.

Sarah Shepherd of Go Shamokin, a committee of SABER, the Shamokin Area Businesses for Economic Revitalization, said the event is being held to celebrate the 130th anniversary of John Kleimbach’s invention of the first portable waffle maker in 1891.

People have been making waffles for six centuries, but the first portable waffle maker was invented by Kleimbach and the machine was cast in iron in Danville. If you ever wondered why a waffle maker is called a waffle iron — even the really old ones — now you know.

According to GoShamokin’s website, Kleinbach was a German immigrant who settled in Shamokin and designed a portable machine that could make 12 waffles at a time. He became a waffle iron salesman and took his machine to the Chicago World’s Fair of 1893 where the waffles were very popular with fairgoers. His treat sold for one penny each or ten cents per dozen.

Waffle Fest events are planned to begin at 1 p.m. and conclude around 8 p.m. A talent show, Shamokin’s Got Talent, will be held from 1 to 3 p.m. and street vendors and crafters will be lining Independence Street. At the corner of 9th and Independence Streets, a petting zoo will welcome children — and adults.

There will, of course, be lots of waffles at the event, but the first Waffle Eating Contest will be held at The Dining Room, 100 East Independence St. The children’s contest will begin at 5 p.m. and there are two categories: 6 years and under and 7 years and over. There is no fee for the children’s contest, but the adults will have to pay $10 per person to participate in their contest which will begin after the children’s event has finished — probably around 6 p.m.

The adult winner, in addition to claiming bragging rights for the year, will receive one year of free chicken and waffle dinners at The Dining Room. Chicken and waffles are on the menu every Wednesday night of the year.

The band, Not So Hollywood — Unplugged, will play at The Dining Room at 4 and 6 p.m. or before and after the waffle eating contest.