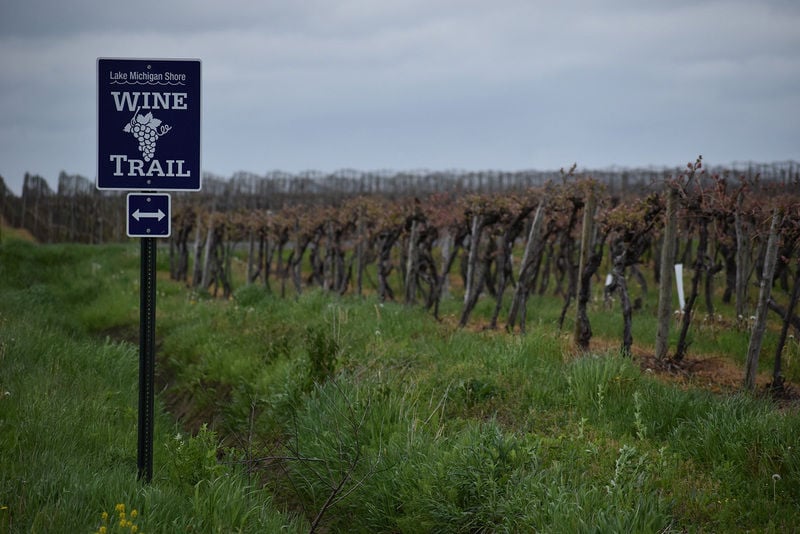 Signs mark the Lake Michigan Shore Wine Trail, a collection of 18 wineries spread across the American Viticultural Area of the same name. The area is home to even more wineries than that, since not all of them are trail members. (Lori Rackl/Chicago Tribune/TNS) 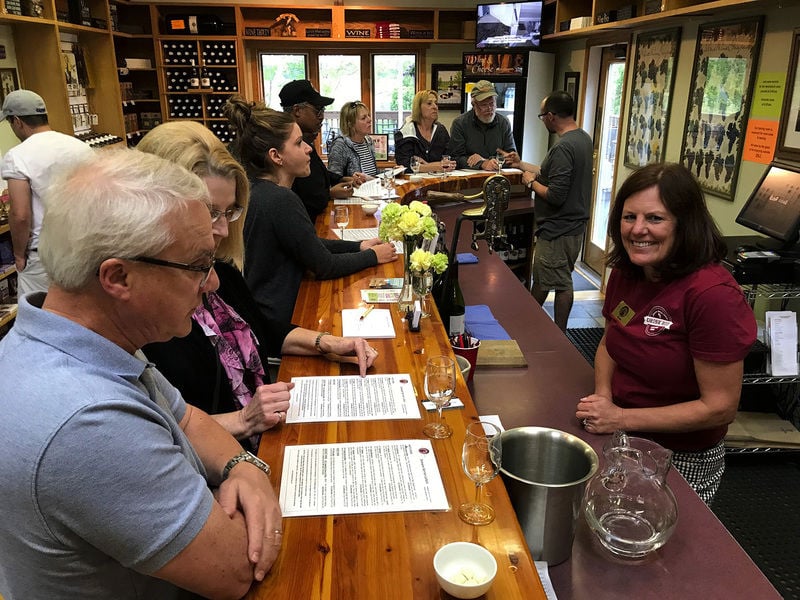 In the tasting room at Domaine Berrien Cellars, $10 gets you five samples and a souvenir wine glass.

Signs mark the Lake Michigan Shore Wine Trail, a collection of 18 wineries spread across the American Viticultural Area of the same name. The area is home to even more wineries than that, since not all of them are trail members. (Lori Rackl/Chicago Tribune/TNS)

In the tasting room at Domaine Berrien Cellars, $10 gets you five samples and a souvenir wine glass.

“Sometimes I take baths because it’s hard to drink wine in the shower.”

This maxim hangs on the wall near the cedar tub in my room at Among the Vineyards, a bed and breakfast where the shoutouts to grown-up grape juice are as plentiful as misplaced beverage containers on the set of “Game of Thrones.” (The B&B’s Wi-Fi password? “Drinkwine.”)

Each of the four rooms at this new B&B _ it opened less than a year ago in the heart of southwest Michigan’s wine country _ is inspired by wine from a local producer.

My room, Traminette, is a nod to the Gewurztraminer hybrid grape that goes into vivid blue bottles of a semi-sweet white made at Gravity, a nearby vineyard and winery.

The other three rooms, occupied on this particular weekend by well-behaved attendees of a bachelorette party, have similar origin stories tied to wineries just a few miles away.

That’s the beauty of this place: Lots of vineyards and wineries are just a few miles away. And that’s why Barb Antonucci, a gregarious nurse in her mid-50s, decided to start a B&B in this fertile corner of the “fruit belt,” where she grew up.

“Back when I was a kid, there were only a couple of wineries here,” Antonucci said. “Now, it’s booming — 12 wineries and tasting rooms within 5 miles of us.”

I managed to hit just about all of them on a recent long weekend in wine country, in the Midwest version of Napa Valley.

Before you wine snobs pshaw the notion of “Midwest” and “Napa Valley” co-existing in the same sentence, take a few swigs of Dablon’s 2015 Estate Red Blend or Domaine Berrien Cellars’ 2016 Crown of Cabernet, and then we’ll talk.

“There’s a misconception out there that we can only make rieslings, and that’s not true,” said Kathy Sturm, executive director of the Lake Michigan Shore Wine Trail, a collection of 18 wineries spread across the American Viticultural Area, or AVA, of the same name. The group’s biggest event of the year, the 14th annual Lake Michigan Shore Wine Festival, was scheduled to take place this month at scenic Warren Dunes State Park.

Lake Michigan Shore is the largest of the state’s five distinct AVAs, stretching from the Indiana border north to Fennville and east to Kalamazoo,

The protective “lake effect,” mineral-rich soil (thank you, glaciers) and other factors all make up the special sauce that renders this region hospitable for growing a surprisingly wide variety of grapes.

Winemakers are increasingly capitalizing on this versatility. They’re producing a diverse range of offerings — available in an equally diverse range of tasting rooms — and debunking the notion that the vino here is about cloying sweetness and fruit that belongs in pie, not a wine glass. Now I sound like the wine snob.

“We can do light whites all the way to hearty reds, ice wine and sparkling,” Sturm said. “We’ve become a true wine destination.”

At a mere 90 miles from downtown Chicago, Among the Vineyards B&B (rooms start at $150) is an ideal base for exploration, at least for the southern end of this AVA.

While the area’s tasting rooms are clustered relatively close together, the experiences can feel worlds apart.

At Dablon Winery & Vineyard, a rustically elegant tasting room is tucked among dozens of acres of land lined with neat rows of vines. Pinot noir, chardonnay, cabernet sauvignon and merlot are all accounted for, along with some more recently planted varieties not usually seen in these parts, such as Spanish tempranillo and nebbiolo, the building block of some of Italy’s boldest red wines.

“There’s not been a grape yet that we haven’t been able to grow and ripen,” said William Schopf, who owns the winery as well as Chicago’s Music Box Theatre.

Schopf chalks up the area’s grape-growing success to good soil, drainage and that big body of water between the two states where he works and lives.

“Lake Michigan has a wonderful moderating effect in the middle of winter,” he said.

“And when it warms up in the spring, the coolness of the water slows the buds down. The slower and later the buds break, the less risk from a late frost.”

While lots of wine tastings in the area cost around $10, Dablon’s price is a bit steeper at $15 for five samples. Some of the bottles, like the Estate Red Blend that aged for two years in French oak, sell for $50.

“We want serious wine drinkers,” Schopf said, adding that he’s not a fan of some of the large tour groups and other folks who seem more interested in getting hammered than savoring wine.

More of a party-festival vibe permeates Round Barn, which has a $5 cover charge on the weekends and can draw crowds of 3,000 to its sprawling grounds that include a distillery, an outdoor stage for live music (Saturday and Sunday, May through October) and a century-old circular barn.

The same hospitality group, Moersch, also runs the more sedate Free Run Cellars. This is where I had some of my favorite wine of the trip _ a $12 flight of sauvignon blanc, meritage and cabernet franc _ served in a minimalist tasting room with Edison bulbs strung from the ceiling and abstract art on the walls. Beyond the windows were rows of soon-to-bud grapevines and a mashup of hickory and pecan trees known as hicans.

Pro tip: Free Run hosts a 40-seat Epicurean Dinner Series the first Friday of the month, through October, where four courses of small plates are paired with wine samples for $35.

Most tasting rooms have limited food offerings: cheese and crackers, olives, dips, that kind of thing. The venerable Tabor Hill Winery & Restaurant _ also under the Moersch umbrella _ is the exception. Make a reservation for a window seat and watch the sun dip below the vines as you tuck into steak and seafood. Another pro tip: Diners get 20% off bottles bought at the onsite tasting room.

“We do 1,500 cases a year, with everything bottled and hand corked right here,” said owner and winemaker Adam McBride, as he poured a sample of his aromatic cabernet franc in Hickory Creek’s tiny tasting room. “We like to say it’s like making dinner for five people versus 500.”

McBride, 42, got the winemaking bug while stationed with the U.S. Air Force in Germany’s Mosel Valley. Not coincidentally, military veterans and first responders get free tastings.

The vineyard also has a dog-friendly cottage that sleeps four and can be rented for $189 a night, on average.

The winery is in growth mode, but McBride wants to keep it a boutique operation.

“Three-thousand cases a year _ I don’t want to be much bigger than that,” he said.

The Most Unconventional Winery Award goes to Red Top, a lofty, garage-like spot that opened a couple years ago. It’s by the same husband-and-wife team that own Gravity, which makes more traditional wine. At Red Top, it’s all about experimenting, from a pina colada-flavored wine to a Windex-blue, fruit-forward sparkler called Lake Effect. Some of the wine is aged in bourbon barrels. All of it is poured out of taps.

Another place you don’t see every day is Lake Michigan Vintners, a relatively new tasting room with an urban feel in downtown Baroda. The wine is made by students at Lake Michigan College. They must be studying hard, because they’re acing the end result.

Some of the more veteran wineries worth a stop include Lemon Creek, where the same family has been farming the land for six generations. They’ve been selling wine for 35 years at their tasting room, whose unofficial greeter is a golden retriever.

Another is Domaine Berrien Cellars, known for its award-winning dry reds. The cozy, homey tasting room is decked out with grape lights and surrounded by 80 acres, half of which are blanketed with vines first planted in 1992. Katie and Wally Maurer opened their winery nearly a decade later.

“We used to just sit in the driveway and wait for a car to pull up,” Katie Maurer said from behind the busy bar. “Not anymore.”