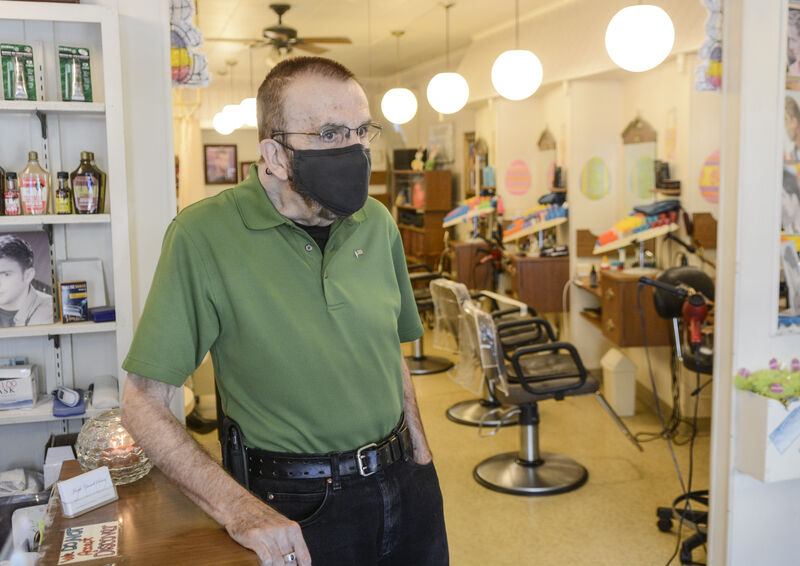 Salon owner Joseph Carroll talks about running his business for 50 years in the same spot on Market Street in Lewisburg. 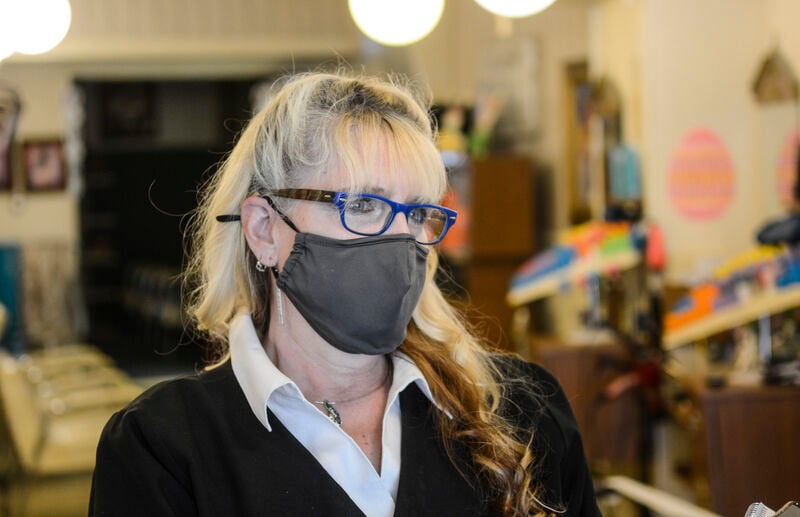 Teresa Snyder has worked as a stylist at the Joseph Carroll Salon for 38 years. 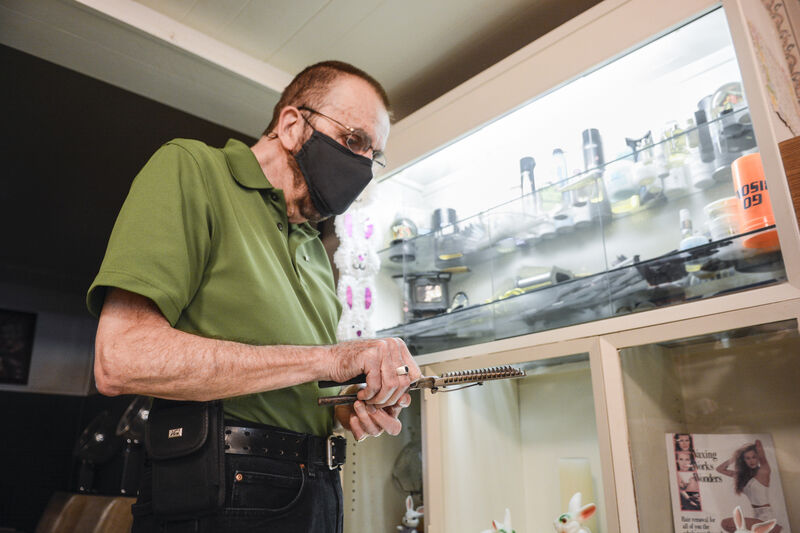 Robert Inglis/The Daily Item Joseph Carroll talks about an old fashioned hair styling tool that he keeps at his Lewisburg Salon of 50 years. 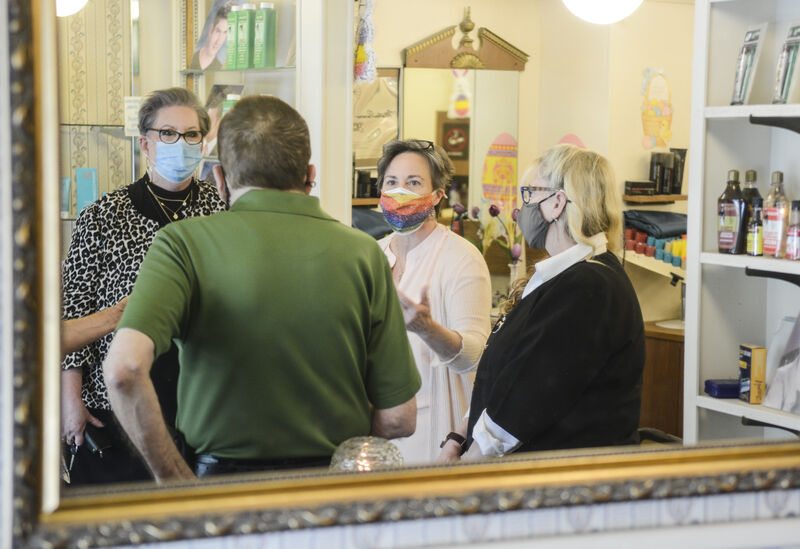 Robert Inglis/The Daily Item Susan Kauffman, left, Ellen Ruby, and Teresa Snyder talk with Joseph Carroll about his salon and how long it has been in the same spot in Lewisburg.

Salon owner Joseph Carroll talks about running his business for 50 years in the same spot on Market Street in Lewisburg.

Teresa Snyder has worked as a stylist at the Joseph Carroll Salon for 38 years.

Robert Inglis/The Daily Item Joseph Carroll talks about an old fashioned hair styling tool that he keeps at his Lewisburg Salon of 50 years.

Robert Inglis/The Daily Item Susan Kauffman, left, Ellen Ruby, and Teresa Snyder talk with Joseph Carroll about his salon and how long it has been in the same spot in Lewisburg.

LEWISBURG — Fashion trends in clothing and hairstyles come and go, as do the businesses inside storefronts in downtown Lewisburg.

Stylist Joseph Carroll observes it all from the salon that almost hasn’t changed in name and never moved in 50 years from 431 Market St.: Joseph Carroll Salon.

Carroll took on the business as his own in 1971 after working in the shop for one year prior when it was operated by a former owner under the name Bruno’s House of Fashion. Anticipating a move to unisex salons, Carroll dropped the word “Beauty” from his business name in 1973.

“The whole thing in our business is you keep adapting with what comes around,” said Carroll, who marked a half-century in business in March.

Adaptation came quickly in 1976 when Dorothy Hamill wore an Olympic gold medal around her neck and a bobbed hairstyle up top.

“She took the world by storm with that,” Carroll said of the figure-skating champion. “I closed the salon for a week and we went to an advanced training center to learn how to do scissor cutting. Up until then, we did razor cutting and we were taught razor cutting in school when we were going for our license. That was a big turning point for us,”

Carroll was born and raised in Philadelphia. He served in the U.S. Navy and used benefits from the GI Bill to study cosmetology at night school.

Fishing lured Carroll to the Selinsgrove area where he fished with a friend whose family spotted an advertisement for a job opening at Bruno’s. He was uncertain but feared the specter of opportunity lost.

“So, I closed out my apartment, packed up my car and came up here,” Carroll said.

Working part-time at Philadelphia salons impressed upon Carroll the importance of keeping work and romance separate. He vowed not to date inside the salon. That’s one pledge he broke when on chance, the former Gail Forbes found herself in his styling chair.

They dated. Within three years, they married. The onset of health issues led Gail eventually to take on a full-time role as a receptionist. They’d eventually buy the salon building, which Carroll said was built in 1855 as a feed and grain store. They had additions constructed onto it and moved out of the country in Kelly Township and into the large downtown apartment above the business.

Their marriage wasn’t a secret, but it also wasn’t something they spoke about at work, Carroll said. The titles of Mr. and Mrs. were for outside the salon. It led to some strange gossip.

“Joe, there’s a rumor going around town that you’re dating that new receptionist you have, that blonde,” Carroll said, recalling a particular client’s warning.

“Well,” Carroll replied, “that blonde is my wife.”

Carroll was stricken with cancer in 2001. He credited a former salon worker, Susan Radel, for running the business for about 10 months. He finished cancer treatments in May 2002 but just two months later, Gail was diagnosed with chronic myeloid leukemia. She died in 2004.

“I wish I had her back but she’s no longer suffering, that’s the main thing,” Carroll said.

Teresa Snyder will have worked at Joseph Carroll Salon for 39 years in November. Her mom was a client and suggested she apply for an opening. Her sister applied, too, as did one other young woman. Snyder was reluctant. She didn’t want to put together a resume.

“And then I did. And then I got hired, and I’ve worked here ever since,” Snyder said.

“The only one that called every day was Teresa,” Carroll recalled of her checking in on the opening. “So, we came to the conclusion that Teresa was the one.”

Joseph Carroll Salon is a four-chair shop. It’s just Carroll and Snyder, now. Occupancy restrictions almost necessitate that during the pandemic. Carroll said about five people are permitted inside at any one time. The shop closed for 13 weeks last year before reopening at half-capacity in mid-June. It’s been difficult, especially for men’s cuts — Bucknell students had tended to show up in pairs or threes for walk-in service. At present, they’d almost surely have to wait outside.

Susan Kauffman, president of the Lewisburg Downtown Partnership, operates Black Dog Jewelers just two doors west of the Carroll Salon. Ellen Ruby is executive director of the Partnership. They sought to pay respects to Carroll for being in business 50 years but Carroll made a point of crediting them both for their work on and off Market Street. They deflected back to Carroll.

“It shows that we have a vibrant downtown and we’re still relevant,” Kauffman said.

“There’s value to consistency. Obviously, things change over the years but there’s also something important and strong about having something here for a long time,” “I’m thankful that this downtown is somewhere Mr. Carroll has wanted to stay all these years.”