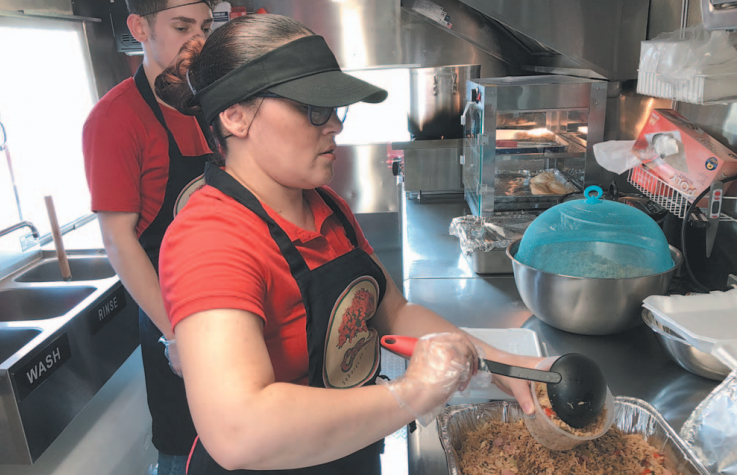 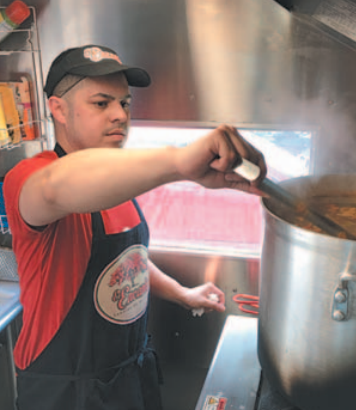 “I haven’t see many real food trucks around this area, except at the festivals,” said Cardona, of Sunbury. “Hopefully the more people who find out about it, more people will come to try it out.”

El Encanto is one of the few food trucks operating in the Greater Susquehanna Valley. Many believe food trucks are an urban phenomena that is only just reaching rural communities.

Maria Lorenzo, who runs El Encanto, with her husband, Gino Cortes, said she saw food trucks everywhere during her childhood in New Jersey. “I thought it was more normal,” she said. “It is not very common in this area.”

Gunzey’s Hot Sausage food truck co-owner Mark Strous said cities like Philadelphia and Pittsburgh have always had food trucks while the business model is just now arriving in rural communities. Gunzey's operates from 9 a.m. to 5/6 p.m., Mondays through Saturdays at the Lowe's in Selinsgrove, said Strous.

She explained that all food trucks must possess a retail food license, but who grants them a license depends on where they are operating.

He said food trucks would need to get a license from the state to operate in Lewisburg. However, he said Lewisburg can decide where the food truck can officially operate within the borough.

“We do not allow food trucks to operate on borough property, streets or parking lots unless they are there for special events where the roads and parking lots are closed,” said Lowthert. “We don’t want them to clog traffic or anyone to step out of a food truck into traffic.”

While Lewisburg does allow food trucks to operate on private property, he said they have to meet with the Central Keystone Council of Governments Zoning Officer David Hines to obtain approval. The borough does issue transit vendor licenses, but those vendors cannot park and sell their food. “They can just stop, sell ice cream and move along,” said Lowthert.

Mike Jones, owner of Mike’s Food Truck, recalled receiving a call about needing to be inspected by the local Danville health official when he first set up in Danville. “I received the permit from the state. I didn’t realize there was a Danville Health Board and we needed to apply for another health permit. Luckily, he [the official] honored the state license,” said Jones.

Despite some of the difficulities running a food truck, Jones said it is worth it to travel around and go where the customers are located. He currently operates his truck at the Wild for Salmon store in Bloomsburg every Friday throughout the summer and fall, he added.

Lorenzo said she thinks one reason why there are fewer food trucks in rural communities is because it can be challenging to find a permanent location, adding that some communities are more welcoming than others. She said her business operates at 950 Route 522 in Penn Township, Snyder County. She thanked township leaders, All Events Venue and Ink Spot Printing for their help.

She added that she and her husband decided to create El Encanto was to meet the needs of the local Latinx community. She said El Encanto specializes in a variety of regional cuisine, especially from the Caribbean Islands. “A lot of people have to travel hours away to find hispanic cuisine. It will be nice to have something closer to home for them. We are thankful to everyone that has supported us and we want to especially thank our family and friends that helped us make this happen.”