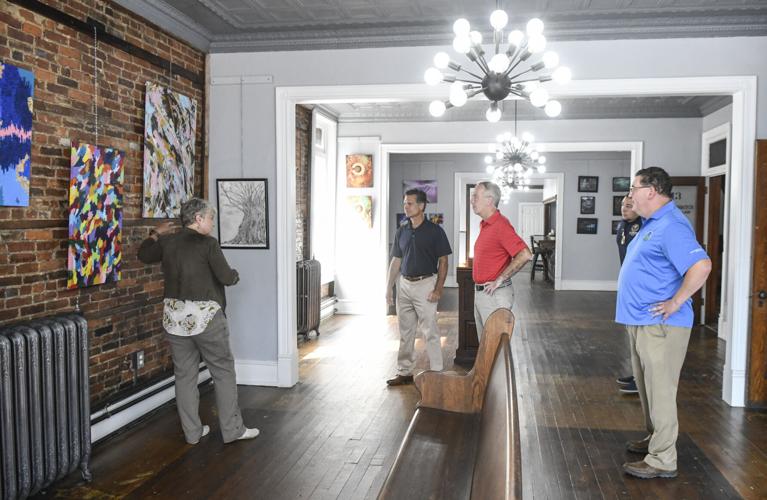 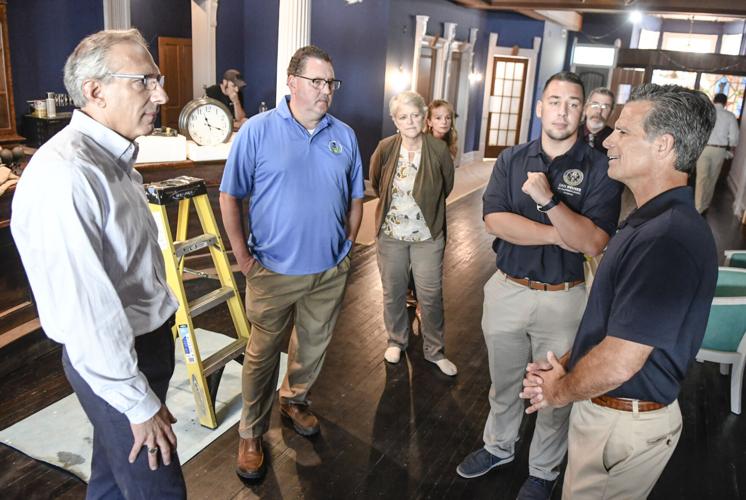 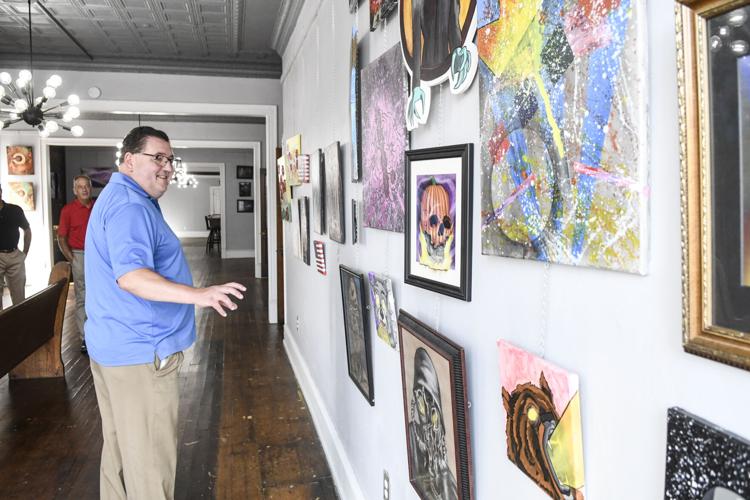 Robert Inglis/The Daily Item Representative Kurt Masser looks over some art on display at the new Artisan Alley in Shamokin on Wednesday. 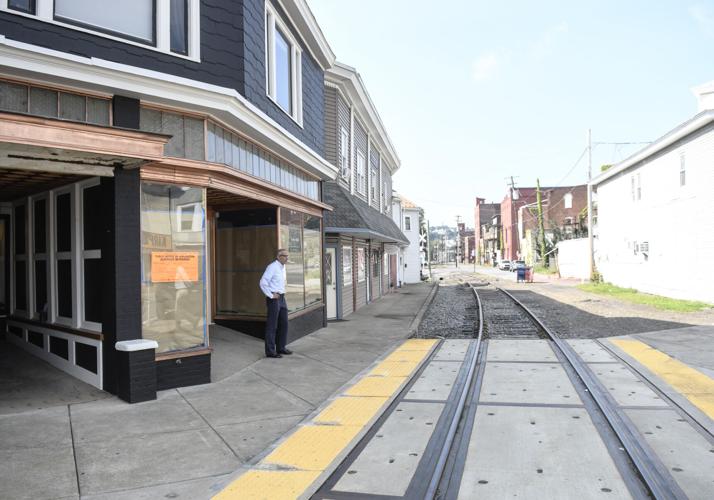 A train track runs in front of what will be Oliver’s Cigar and Spirits shop on E. Independence Street in Shamokin. 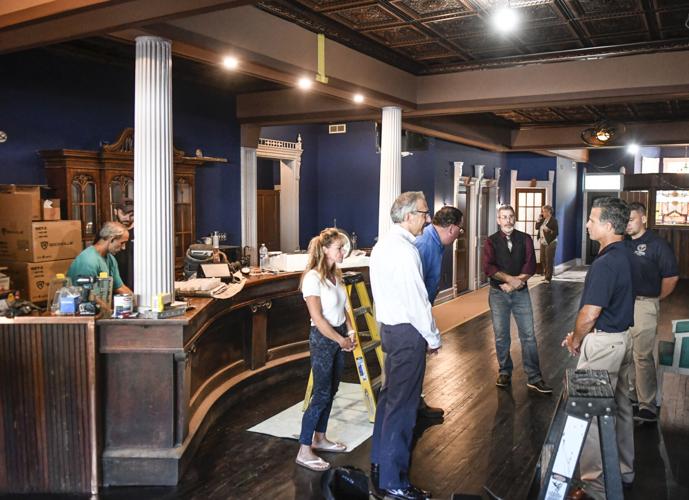 Lawmakers got a sneak peek at what will be Oliver’s Cigar Lounge in Shamokin. 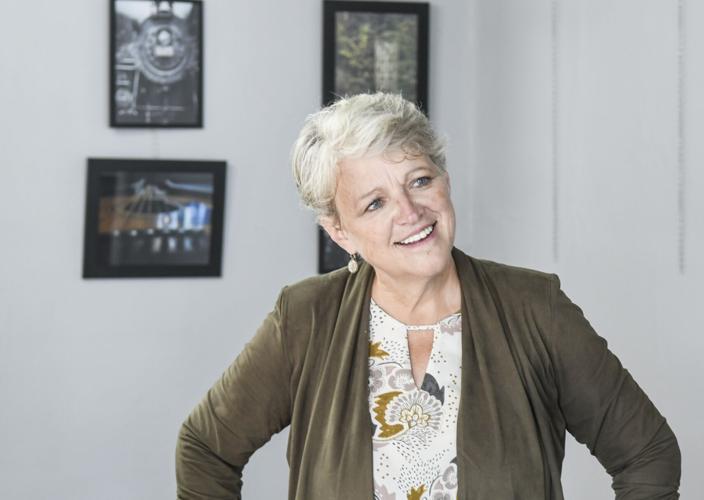 Robert Inglis/The Daily Item Representative Kurt Masser looks over some art on display at the new Artisan Alley in Shamokin on Wednesday.

A train track runs in front of what will be Oliver’s Cigar and Spirits shop on E. Independence Street in Shamokin.

Lawmakers got a sneak peek at what will be Oliver’s Cigar Lounge in Shamokin.

SHAMOKIN — Small businesses and the people who invest in them were highlighted during a tour of Shamokin by Congressman Dan Meuser, R-9.

Renovations at Oliver’s, 144 E. Independence St. in Shamokin’s downtown, continue ahead of a grand opening in October. Artisan Alley, 702 N. Shamokin St., hosts its grand opening Saturday for its art gallery located on the second floor, above the WhatNot Shoppe Cafe. Renovations continue there on the third floor to convert a former Odd Fellows ballroom into a new event space.

“It’s a community on the move because of the people,” Meuser said. “Making Shamokin a more exciting, cooler place to live is what it’s all about.”

Meuser credited the people, not the government, with creating new businesses and jobs in Shamokin. There are programs that can help, though. He pointed to his own allocation request of $2.675 million to aid Go Shamokin’s community revitalization efforts.

Edward and Wendy Manning, the owners of Oliver’s, noted their use of capital gains to reinvest in their building, made possible because their property is in a designated Federal Opportunity Zone — a program that took hold during the Trump administration.

Oliver’s is a cocktail and cigar lounge. It’s interior has a feel akin to a high-end speakeasy from a century ago. Featured inside is a half-moon from the former Kunkel’s bar in the Springfield section of Coal Township and a stained glass window that had been at the former St. Stephen’s Church.

“The vision is to be able to offer an exceptional experience for the customer that comes at them from every way,” Edward Manning said of the interior design, service, drinks and cigars. “Our staff is going to be called cast members. Really, their job is to be part of the entertainment function of the lounge, to make people feel welcome.”

Andrew Twiggar, a Shamokin-area native, received $2 million from the Redevelopment Assistance Capital Program toward two hotel projects in the city.

State grant funding helped SEDA-COG open a dedicated office in Shamokin, a three-year presence that’s been extended for a fourth year, Gordner said. The COG’s Betsy Kramer has since made herself a visible and active participant in economic revitalization efforts. And, state funds were secured and used for building facade improvements.

Kathy Vetovich, owner of Artisan Alley and the building where it’s housed, has been at the forefront of such funding efforts through the Shamokin Area Businesses for Economic Revitalization and its Go Shamokin initiative.

Artisan Alley, renovated to show off the building’s original interior features, hosts the works of local artists who rent space in the gallery. Paintings from multiple artists already hang in the space ahead of Saturday’s event. Vetovich said locally crafted coffees and adult beverages will be featured at the space during special events. She’s on the lookout for artists of other mediums like sculpting.

“We have so many artists and they have nowhere to display their works,” Vetovich said.

Masser noted that the Shamokin Industrial Development Authority has up to $500,000 in funds for a revolving loan program to help small business projects move forward.

“There’s an excitement in this town that hasn’t been here in a long time because there’s great things happening that everybody wants to play a part in,” Masser said.