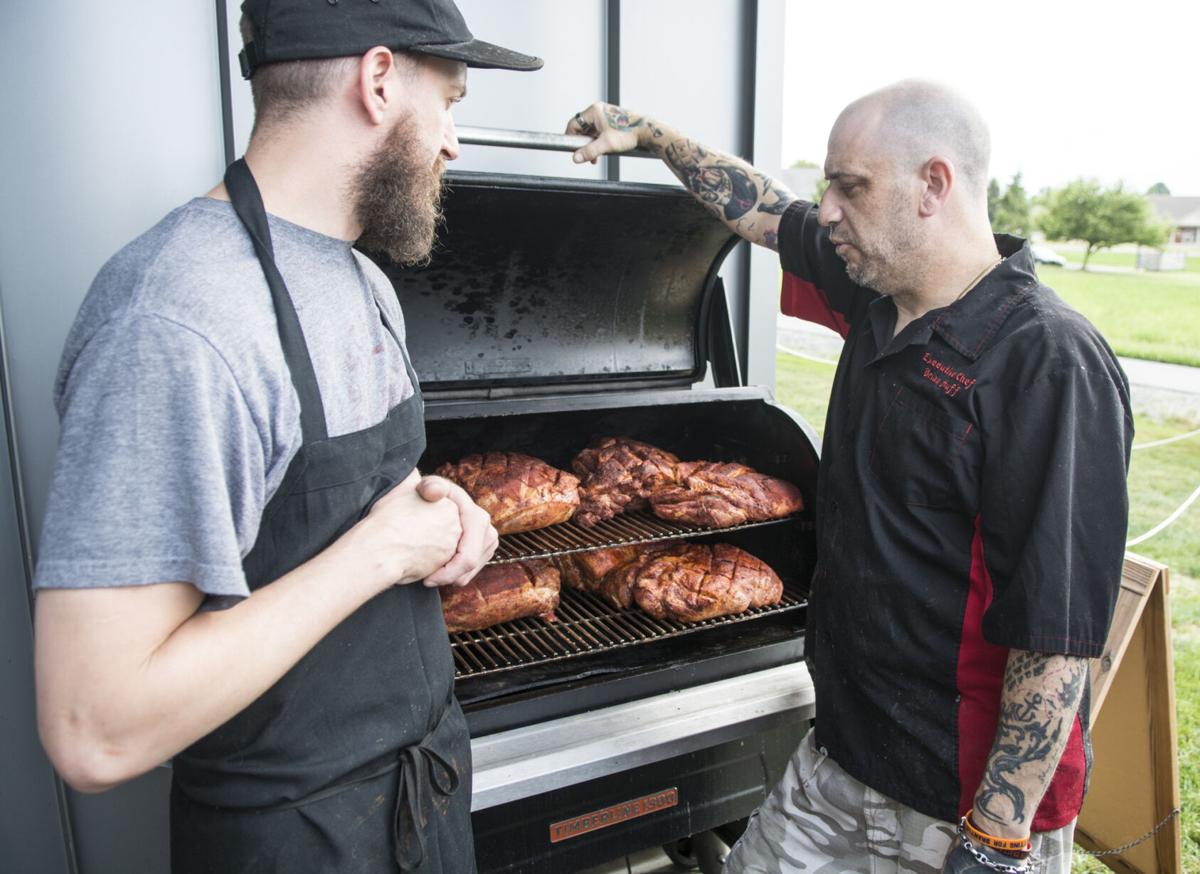 Erik Dressler and Brian Huff look over the meat they are smoking at Jackass Brewing Company in Lewisburg on Wednesday. 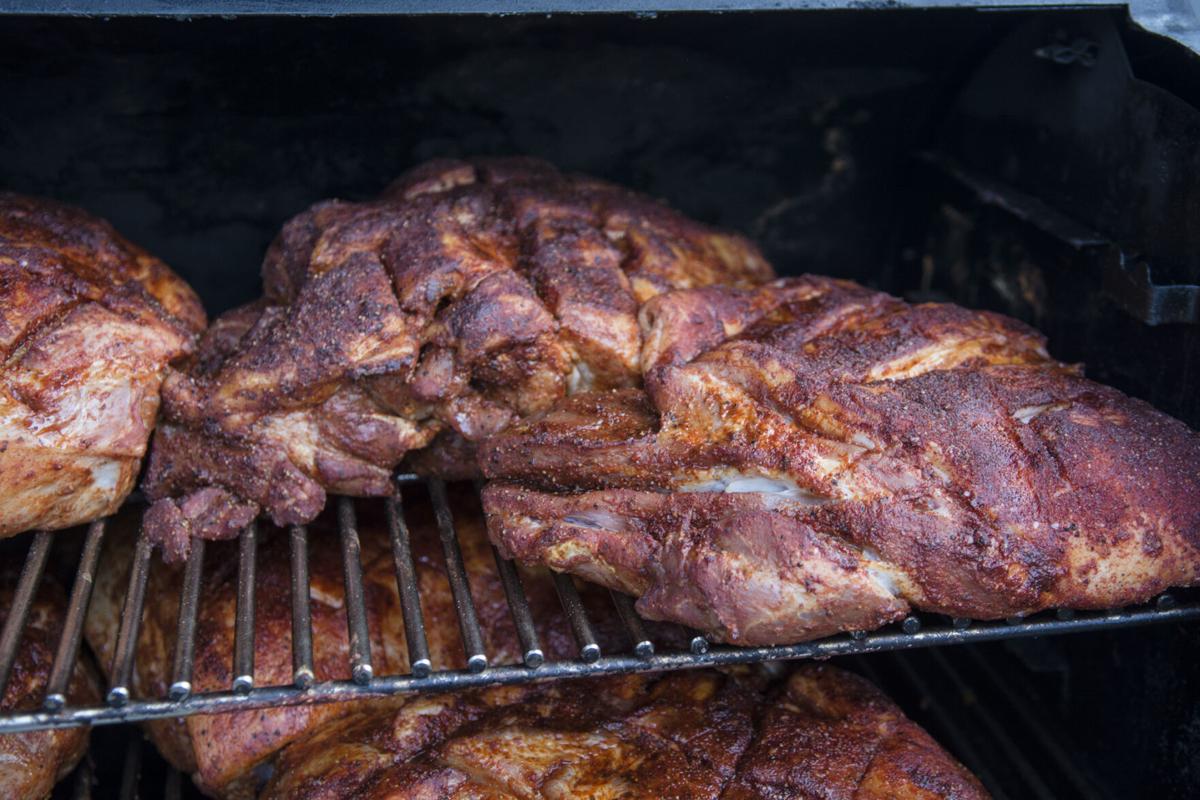 Meat in a smoker at Jackass Brewing Company in Lewisburg.

Eating out means bigger bites from customer wallets compared to one year ago, and so does eating in.

The United Nations reports global food prices soared 40 percent year over year. The organization’s food price index saw increases for 12 consecutive months, with the 4.8 percent rise from April to May marked as the largest increase yet.

According to the U.S. Department of Agriculture, the latest available Consumer Price Index for food shows the cost to eat out in April 2021 was 3.8 percent higher than April 2020. The increase was lower for eating at home: up 1.2 percent in that same time period.

There are many factors at play as the U.S. economy opens and demand for proteins soars, said Geoff Schneider, presidential professor and co-chair of economics at Bucknell University.

Climate change and shifting weather patterns disrupted crop production, cutting into the supply of fruits and vegetables, grain and livestock. That raises the cost to feed farm animals and raises the cost of the animals themselves, Schneider said.

Higher energy prices raise the cost of production, harvest and transport, with that increase passed onto consumers, he said.

“The cost of our wings have doubled over the past year,” Skotedis said of Skeeter’s bulk purchasing of chicken. “We had to pass that along and readjust our sale prices. People have been pretty understanding. We do sell a good product.”

It’s not just wings. Skotedis said. The wholesale price of ribs is up, and sourcing products like Heinz chili sauce and certain to-go containers is remarkably harder than prior to the pandemic, he said.

“Even the price of cooking oil and containers went up,” Premjai said.

Bob Hare, general manager for the Americus Hose Co., in Sunbury, said the Americus sold five cases of wings each week last year. Now, they’re down to half a case as the menu price for a dozen wings went from $7 to $12.

“We were selling so many so fast,” Hare said. “Everything else is still going strong, just the wings have hit a standstill.”

Larry Winans, co-owner of Jackass Brewing Company, Lewisburg, said he’s gone through three different vendors for beef over the past year. The cost jumped 40 percent with one vendor, he said. With another, the product simply wasn’t as good.

“Now with the third, the costs are still high but at least we’re getting the quality we want,” Winans said.

“To the regular consumer, it’s unnoticeable at this point. If it continues, it’s going to be noticeable,” Winans said.

Grocers: No supply issuesAnother factor is the recent cyber attack on JBS S.A., the world’s largest meat company. It took the company’s plants across the U.S. offline for several days before production was restored, according to media reports.

Dennis Curtin, director of public relations, Weis Markets, said the grocer is in “daily contact with our suppliers and expect no disruptions. Should that change, we will adjust as we did last spring when plants were shutting down due to COVID.”

“There’s still just as many chickens out there as there ever was. I don’t know that the demand (domestically) is stronger than it was last year. There’s a shortage because there’s fewer people cutting chickens.”

From Sechler’s standpoint, supply shortages are caused, in part, to growing demand in the export of chicken supplies. It’s easier and less costly to package and ship whole chickens than it is to process and part chicken products for retail packaging.

“There’s still just as many chickens out there as there ever was,” Sechler said. “I don’t know that the demand (domestically) is stronger than it was last year. There’s a shortage because there’s fewer people cutting chickens.”

Schneider, the Bucknell professor, suggested people seek alternatives in the local, farm-to-customer market. Hartman agreed that’s a possibility, but smaller operations have their own issues with slaughter capacity for processing.

There is a limited amount of small livestock processing plants and the lead time went from a month or two up to an entire year, Hartman said.

“The problem is that we don’t have the capacity in the packing sector,” Beymer said.

“The main thing packers are struggling with right now is labor,” he continued, specifically citing continued unemployment benefits as keeping potential workers out of the labor pool.

According to Beymer, even if the packing capacity reached 100 percent, the industry could accommodate an additional 5,600 cattle for processing each day.

SUNBURY — If planning to buy a dozen chicken wings, renovate or build a home, or just wanting to order imported cheese or olive oil, consumers…