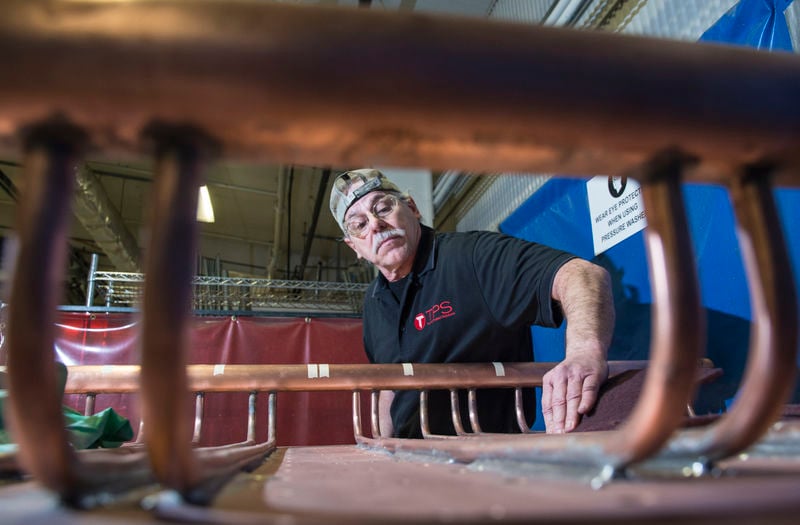 Robert Inglis/The Daily Item Leroy Wheeland, an assembler/welder at TPS, cleans copper pipe after making welds on it earlier in the day. 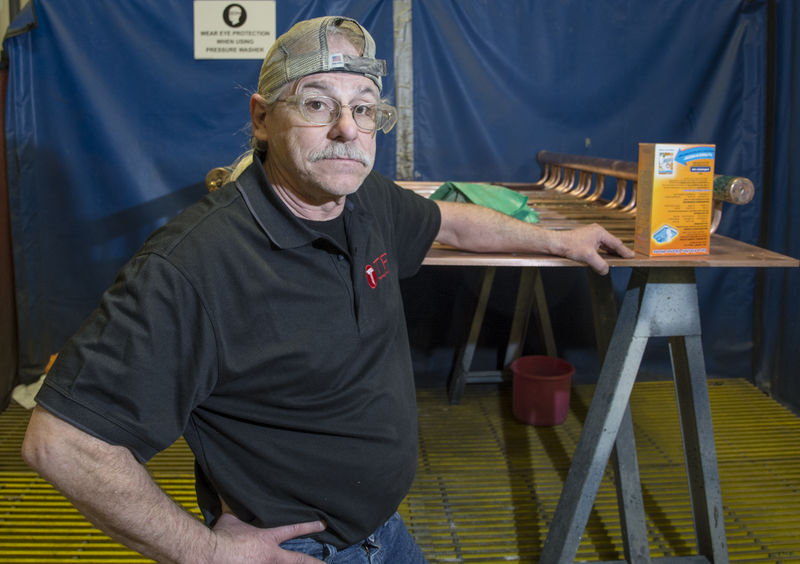 Robert Inglis/The Daily Item Leroy Wheeland, an assembler/welder at TPS, cleans copper pipe after making welds on it earlier in the day.

NEW COLUMBIA — Leroy Wheeland says it pays to be a jack of all trades at Thermal Product Solutions.

He should know, he’s been collecting a paycheck from the Union County manufacturer for nearly 30 years.

Benjamin Lehman, production supervisor, agreed. Lehman said Wheeland welds, assembles, solders, runs a forklift. Wheeland added that he used to travel out of state and out of the country on service calls, too.

That diverse skill set makes Wheeland a good trainer, Lehman said, and has helped establish a culture at TPS of working across departments.

“Any knowledge that’s been handed down here, Leroy’s touched it. There's a little bit of Leroy in everybody that works in mechanical-assembly,” Lehman said.

Gruenberg, Blue M and Tenney/Lunaire are manufactured at the TPS plant in New Columbia — a 150,000-square-foot facility off Old Route. A total of 176 employees work there in engineering, fabrication, purchasing, sales, after-market service and more.

Wheeland joined the company in 1990. He was hired as an assembler and quickly leaned on his welding skills. As an assembler, Wheeland reads schematics drawn by engineers, processes the information and does his part in manufacturing a customer’s order.

“They’re interesting. A lot of technical skills are needed for that,” Wheeland said.

Kelli Stimely, director of human resources and safety, said TPS keeps quiet on the firms the company works with. The testing chambers and rooms manufactured in the Valley can have proprietary information and are used for sensitive equipment, she said.

“There seems to be this huge competition to get into outer space, not only in the U.S. but other countries, too,” Stimely said of government and private sector ambitions.

Aside from the aerospace industry, TPS manufactures equipment for companies in the fields of pharmaceutical and biotech, automotive manufacturing and electronics, composites, oil and gas.

Walking through TPS’s manufacturing plant, Wheeland stops at an environmental test room being fabricated. It’s look is similar to a walk-in freezer. He explains it takes from two to three months to build one, from the time an order is received to the time it’s shipped out.

“As long as they do what we say they’ll do,” Wheeland said of the testing process, “then we tear them apart, crate them up, ship them out.”

Stimely said TPS is busy, so busy there’s a backlog of customer orders. That means the company’s hiring: engineering, manufacturing, purchasing and sales job openings all are listed on the company website.

If a prospective employee has a diverse skill set like Wheeland, that’ll help. And if they don’t, they may learn on the go.

“This is a great place to come in with one skill and learn many skills. We love that here,” Stimely said. “We love when (employees) raise their hand and say, hey, I’d like to try that.

“The more they learn the more they earn, and we can get products to our customers faster,” Stimely said.