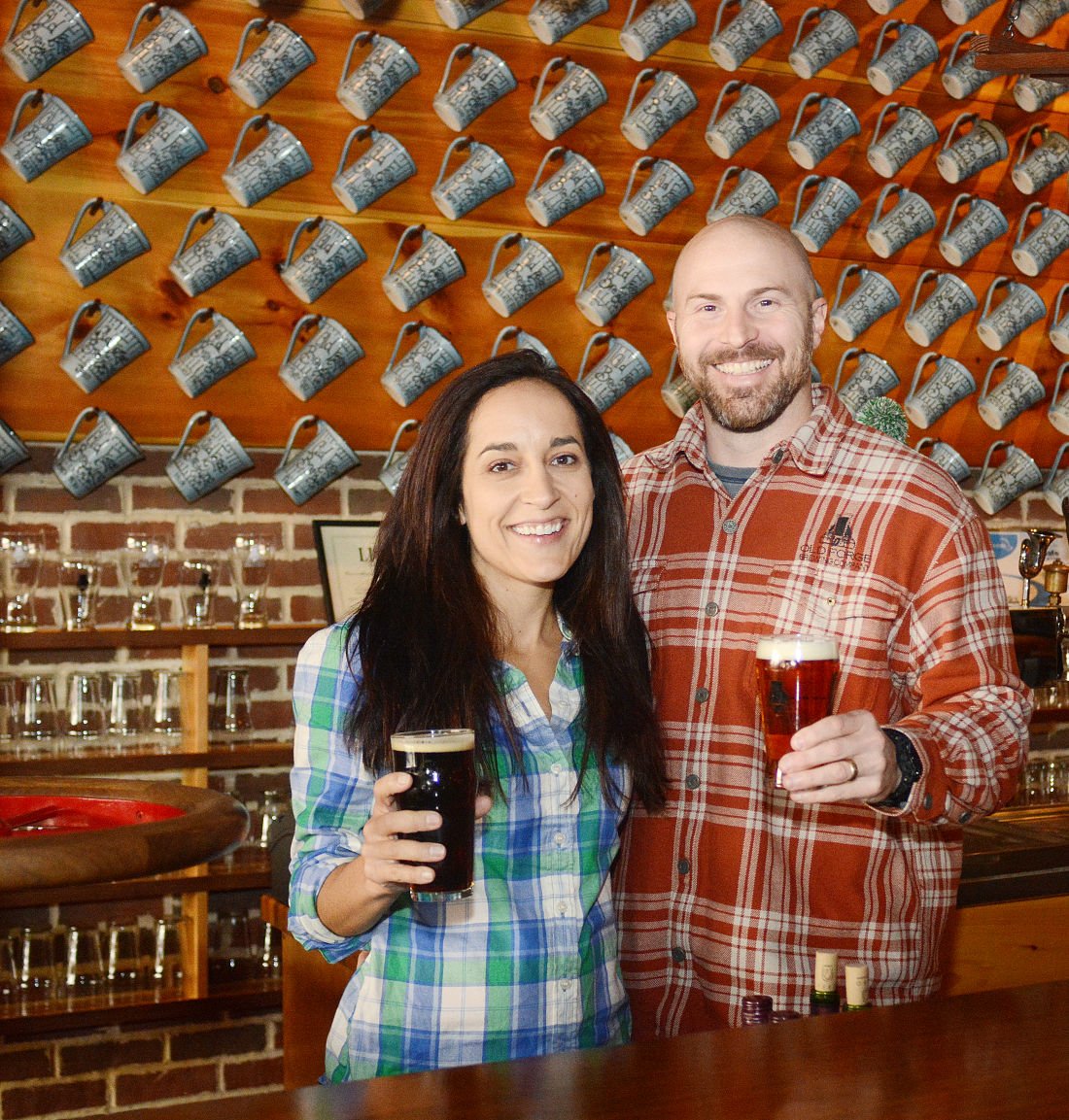 Maria and Damien Malfara, owners of Old Forge Brewery, pose with their favorite beers behind the bar in Danville. 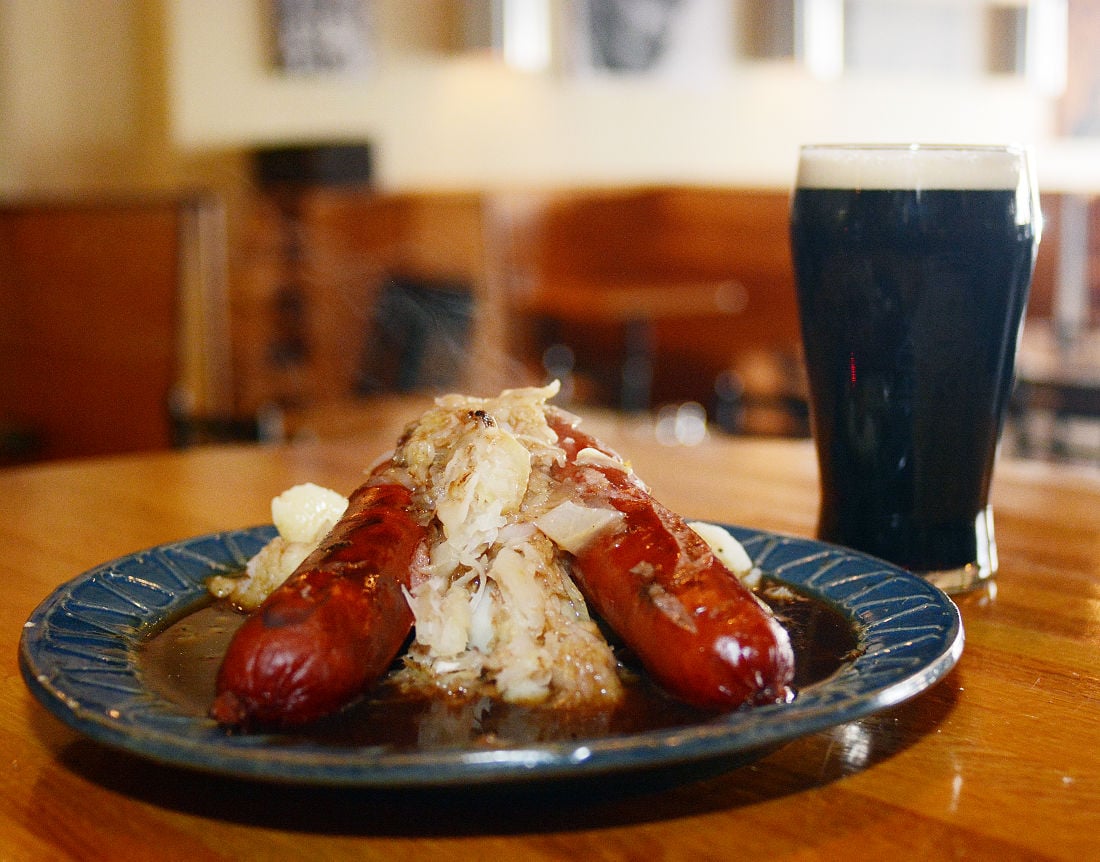 Beer Bangers and Mash, along with a beer, are on the menu at Old Forge Brewery in Danville. 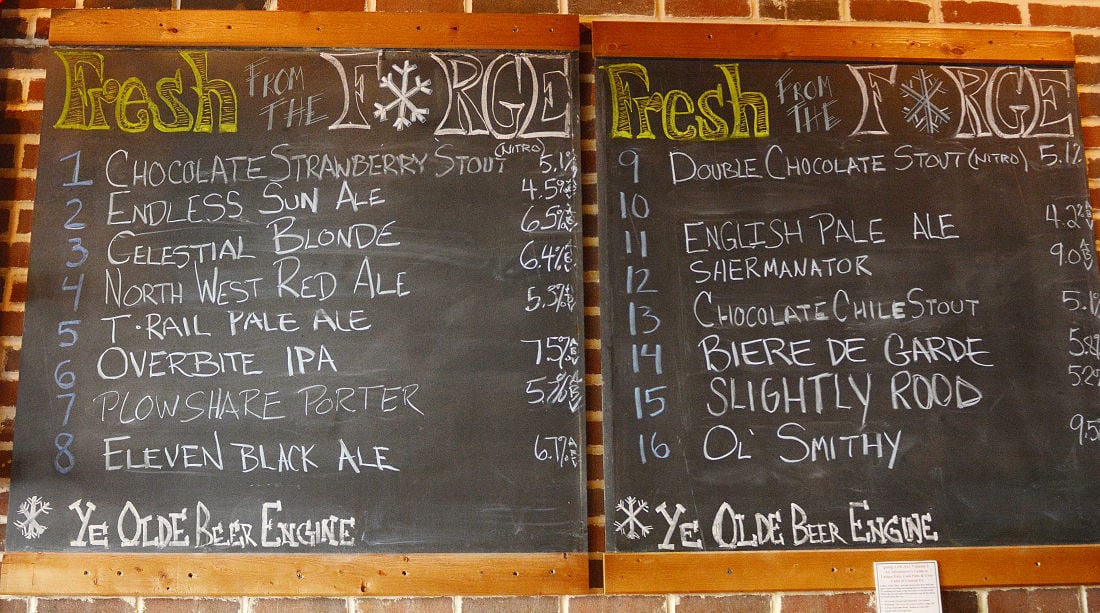 The beer menu board at Old Forge Brewery in Danville.

A beer flight at Old Forge Brewery in Danville.

Maria and Damien Malfara, owners of Old Forge Brewery, pose with their favorite beers behind the bar in Danville.

Beer Bangers and Mash, along with a beer, are on the menu at Old Forge Brewery in Danville.

The beer menu board at Old Forge Brewery in Danville.

A beer flight at Old Forge Brewery in Danville.

DANVILLE – Damien Malfara started home-brewing beer 16 years ago and got involved seriously in 2007.

He got interested through a roommate while living in Philadelphia.

“It helps a little bit to understand the science behind it,” said Malfara, a Temple University chemistry graduate who previously worked in sales.

Damien was still working full-time and making beer once or twice a week at the time.

“I kept saying if I don’t open, someone is going to do it and we did it,” he said of the craft beer industry which has exploded the past five years.

He and Maria found a building to rent on Mill Street and signed the lease in May 2008 to open Old Forge Brewing Co. With help from friends and family, they renovated and opened Dec. 5, 2008.

“That is also the anniversary of the repeal of prohibition for beer,” he said.

“The 75th anniversary is the day we opened our doors and sold our first beer,” he said.

At that time, he was working with four to six recipes for beer and now, at their larger location which they purchased at 298 Mill St., they brew lots more suds along with a new variety every month.

“Over the years, we have made 50 to 100 and have 16 on tap,” he said. They offer two  flavors on what is known as the beer engine that is hand-pumped, Maria said. They are at a different temperature and a traditional English style.

Their most popular flavor for non-beer drinkers is Endless Sun Ale. Beer drinkers prefer their Overbite.

They have made their new location, since 2013, more family-oriented and more handicapped accessible. “It’s more about the customers’ needs,” Maria said.

“We always try to do better – we’re never satisfied,” of the restaurant known for unique dishes as well as entertainment and special events including a month-long celebration that raised to money for childhood cancer research in September.

They have artwork by local artists on display that rotates every three months.

Starting out with 12 to 15 employees, they employed about 25 at the previous location and now employ more than 40.

Old Forge brews 500 to 600 barrels of beer each year. Considering each barrel holds 31 gallons, that amounts to 18,600 gallons.

From their permanent menu, people rave about their local beef. This is the beef that eats  grain left from their brewing process. “We are trying to do more and more locally,” said Damien, 40, of Old Forge which was named Small Business of the Year in 2013 by the Columbia Montour Chamber of Commerce.

The kitchen makes a unique bangers and mash dish with sausages which includes Old Forge beer made by Country Store. “You can’t get that anywhere else,” he said.

“Our kitchen is always switching things up. The menu changes from week to week,” he said.

They hold special events such as a visit by magician Brent Kessler Feb. 24, Tuesday Trivia and Open Jam the first Sunday of the month.

Local musicians entertain on a rotating basis Thursdays and Saturdays.

They decided to open a business in Danville because they wanted to be in a town and believed it was a good time with the growth of Geisinger Medical Center.

When they outgrew their first location, they decided to stay because “Danville has always been good to us,” Maria, 33, said.

Patrons are welcomed by iron sculptures painted red and wood décor. Keith Kocher, of Lightstreet, made the sculptures from old iron tools. Kocher also crafted the main bar from oak, estimated to be 300 to 500 years old.

“We feel it’s almost like family with our employees,” Damien said of their business.

The Malfaras now live in the Herndon area with their three children, ages 2 to 6. Maria is from that area.

The couple had moved to Bloomsburg when Maria was pursuing her master’s degree in deaf education at Bloomsburg University.

They balance their hours at the business and with family. “We spend time at home and work on stuff after the kids are in bed,” Damien said.

“It’s our business and we live with it,” Maria said. ‘

“Work and life — that’s not a bad thing,” said Damien, adding they both enjoy the business.

Damien focuses on production and growing sales including with distributors.

Old Forge brands, in cans and kegs, can be purchased at distributors and supermarkets in the region.

Production at Iron Town has been pretty stable with about 2,000 barrels a year or 62,000 gallons.

Last year, they made 11 varieties and employed four full-time plus Damien and a part-timer.

As for his favorite, he likes what’s new.

Maria said it depends on the occasion. “I like Porter in the fall but an IPA is hard to pass up,” she said.