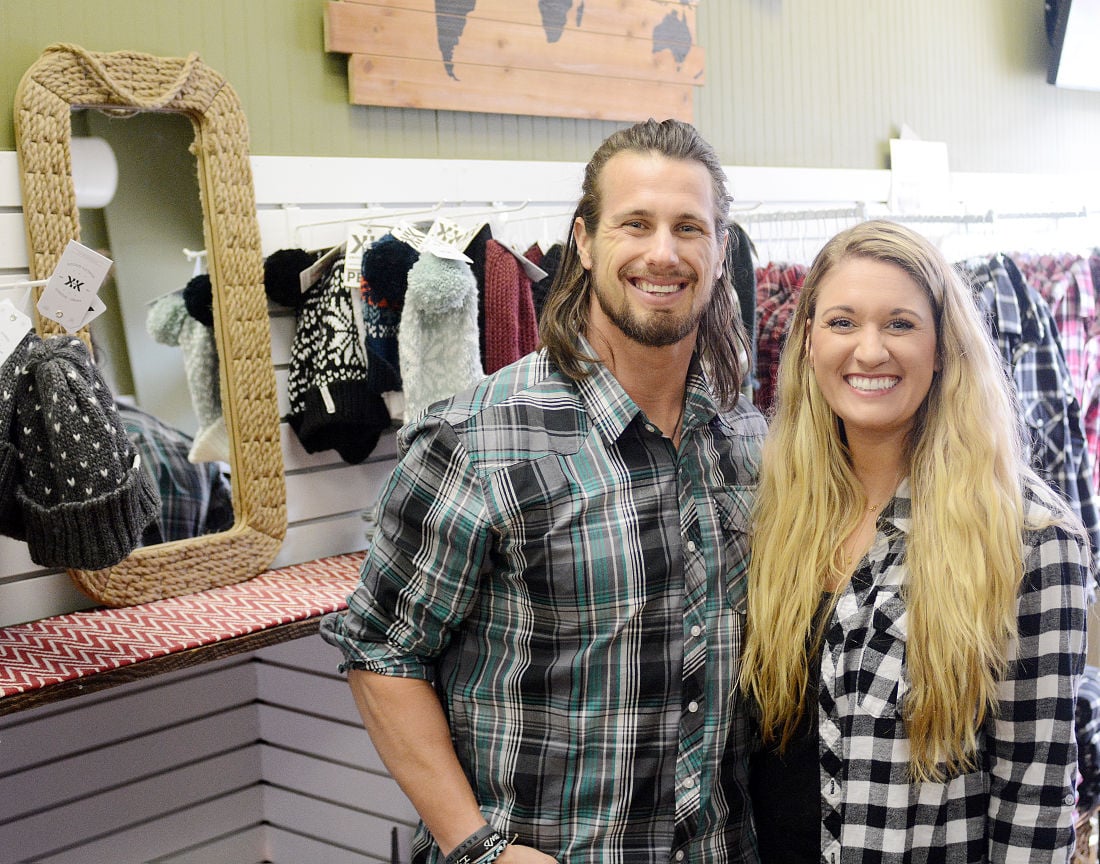 Ryan and Kaitlyn Schuck, owners of Threading Love, pose inside the store in Lewisburg. 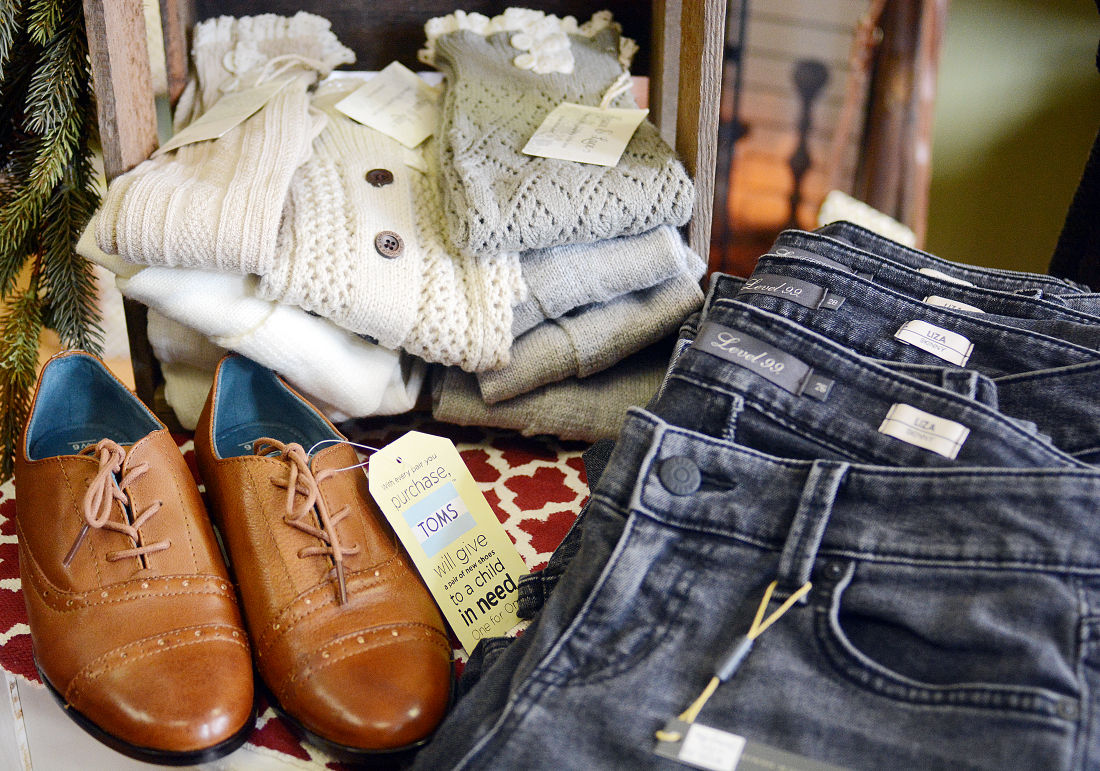 A few of the items on sale at Threading Love in Lewisburg, every item is from a non-profit organization or fair trade companies. 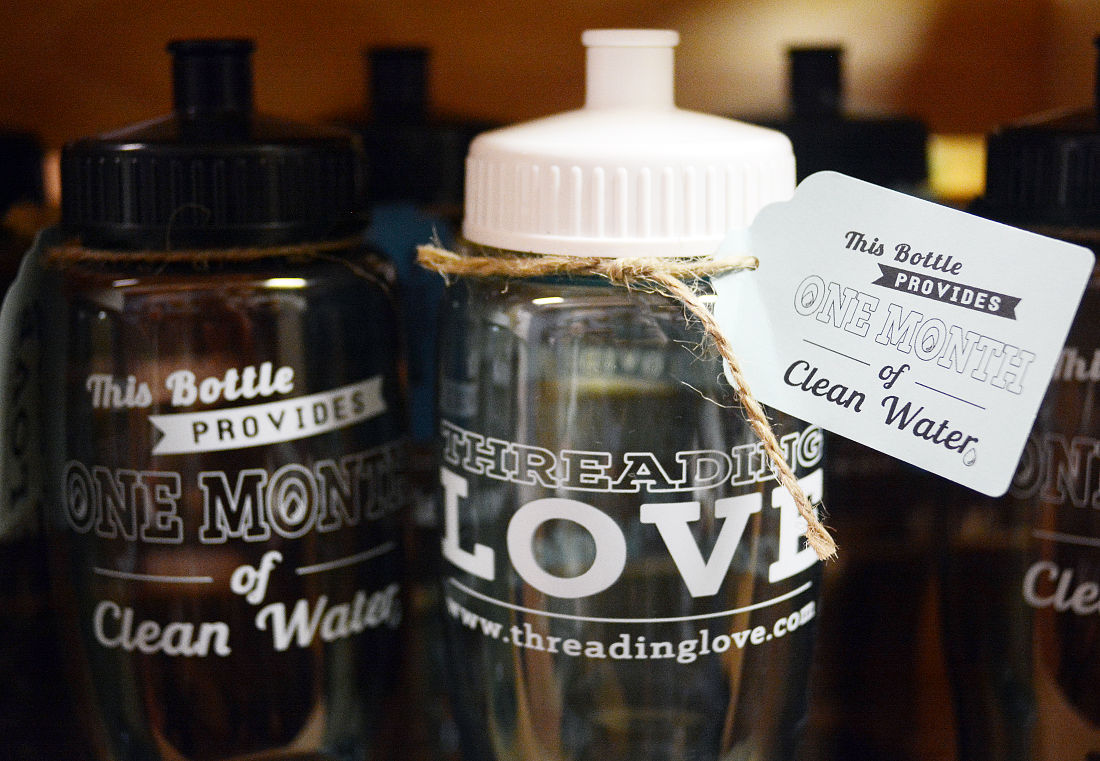 Water bottles with the Threading Love logo for sale in the Lewisburg boutique. 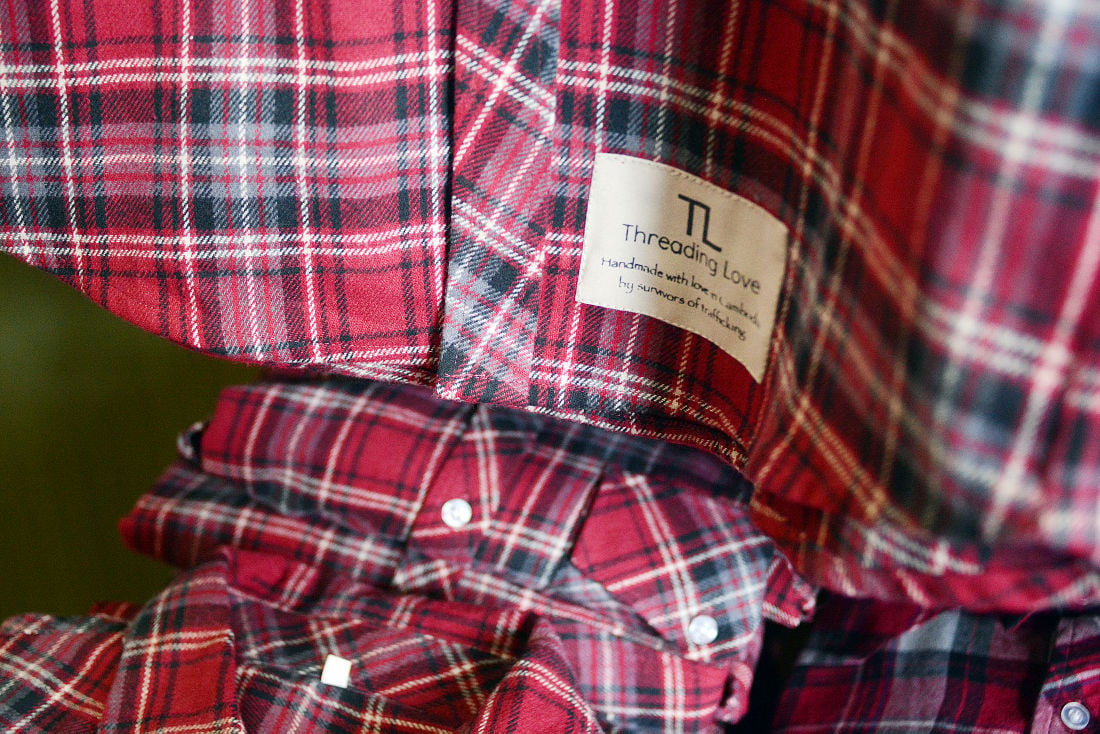 Flannel shirts from the signature collection of Threading Love are on display in the store in Lewisburg.

Ryan and Kaitlyn Schuck, owners of Threading Love, pose inside the store in Lewisburg.

A few of the items on sale at Threading Love in Lewisburg, every item is from a non-profit organization or fair trade companies.

Water bottles with the Threading Love logo for sale in the Lewisburg boutique.

Flannel shirts from the signature collection of Threading Love are on display in the store in Lewisburg.

The background that revealed where a product originated.

It’s no wonder she now is in the business of selling clothing and accessories from around the globe. They all tell a tale, and their sale helps people.

“I loved buying items that had stories behind them,” said Schuck, owner of Threading Love in downtown Lewisburg.

The store, in business for just 16 months, expanded faster than Schuck and her husband, Ryan, imagined. Earlier this month, Threading Love moved to a bigger location next to the Campus Theatre.

The store sells clothing primarily for women ages 15 to 35, but has items for babies and baby boomers.

“We partner with about 65 brands,” she added. “Some are local artisans. Some of the U.S.-based (companies) are helping the homeless. They buy blankets and the blankets are donated to homeless shelters.”

Threading Love also sells Tom’s Shoes. That company works with more than 100 partners in more than 70 countries to give a pair of shoes to people in need for every pair sold.

“We partnered with about eight new brands,” Kaitlin said. “The goal is to continuously expand and keep upgrading.”

Kaitlin, 27, a Mifflinburg native, does her own designs of clothing they sell and works with a mission in Cambodia that rescues women from sex trafficking. The women make clothing that is sold at the store.

“They provide health care, education,” she said of the mission.

Kaitlin has been buying merchandise based on what she finds in the marketplace.

“A lot were brands I wear myself,” she said.

Three companies even have reached out the store.

“They found out our mission,” she said.

But in choosing products, she is picky.

The store is primarily Kaitlin’s operation, but Ryan helps out.

“I am very much behind the scenes,” said Ryan, 29, a Selinsgrove native.

He works full-time as a recreation specialist at the Allenwood Federal Correctional Complex. The former Ohio State football player also was hired as an assistant football coach for Mifflinburg Area High School.

The couple decided to open the business in Lewisburg, where they also live, because they like the downtown business atmosphere.

“There is no question we want to stay local,” Ryan said.

She said the biggest hurdle for them starting a business was their youth.

“We could dream and dream big,” she said. “But some banks were apprehensive.”

They received backing with the help of Bucknell University’s Small Business Development Center.

“They gave us the tools to work with,” she said. “We had no background in business, but a bank gave us a loan.”

“Teaching classes taught me organization, speaking in front of people,” she said.

They moved the business because it needed more than the 1,000-square-foot space in the 200 block of Market Street. The new space is about twice as big.

“We couldn’t have done this without the support of our customers and employees,” Kaitlin said.

They plan to set up a 5K race on April 30 where people can choose one of five causes to support. Threading Love will try to partner with a local charity.

“That’s kind of like what we’re trying to do here,” she said. “We always have that mission mindset.”