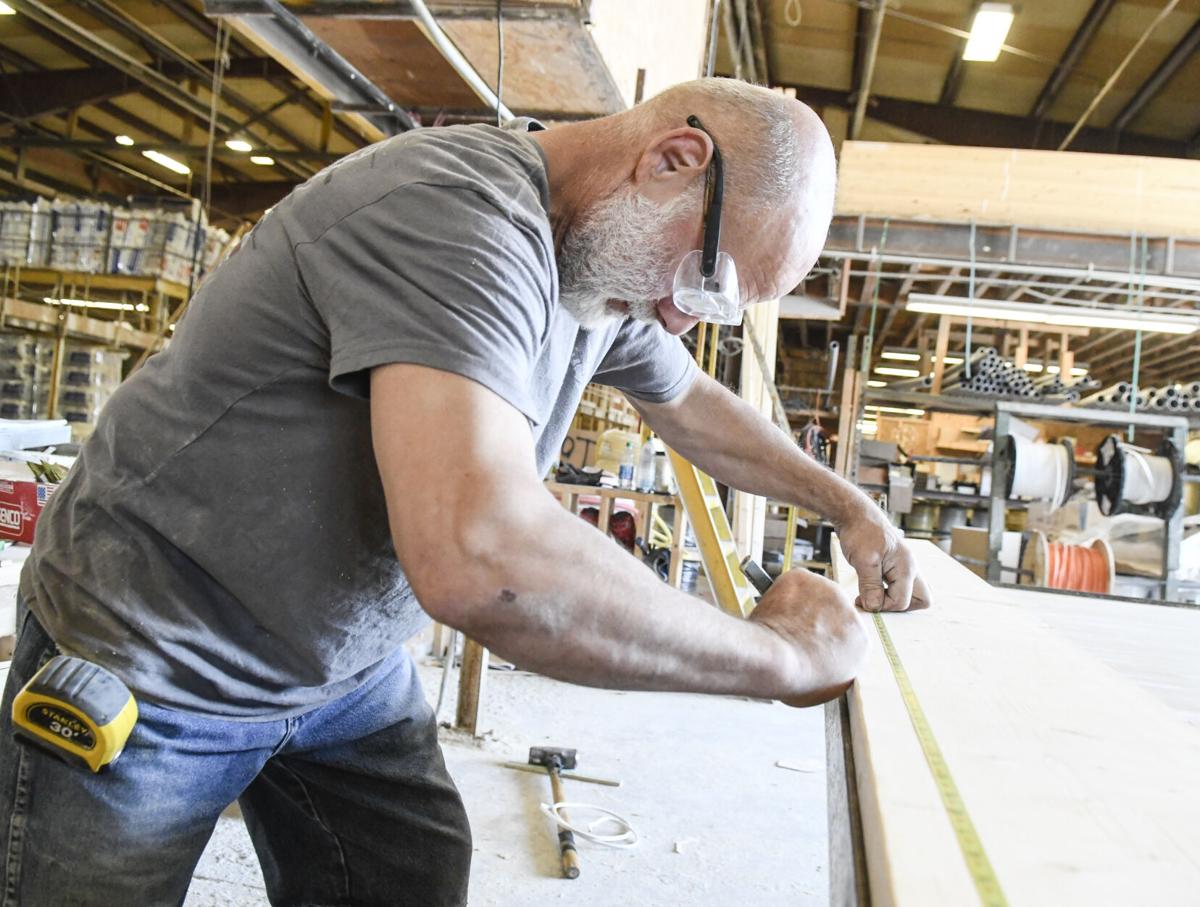 Robert Inglis/The Daily Item Lewis Blessing measures out a board at Apex Homes on Thursday afternoon. 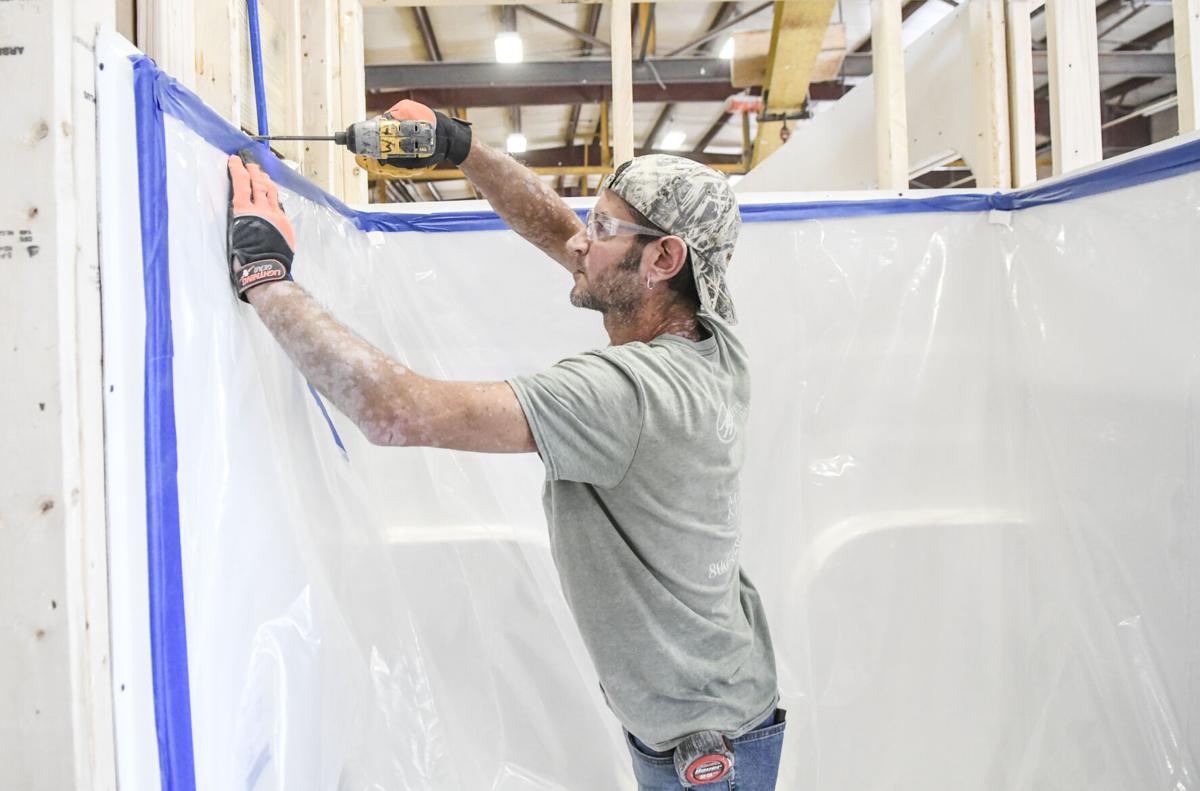 Franky Canepa installs a shower in a home at Apex Homes in Middleburg on Thursday. 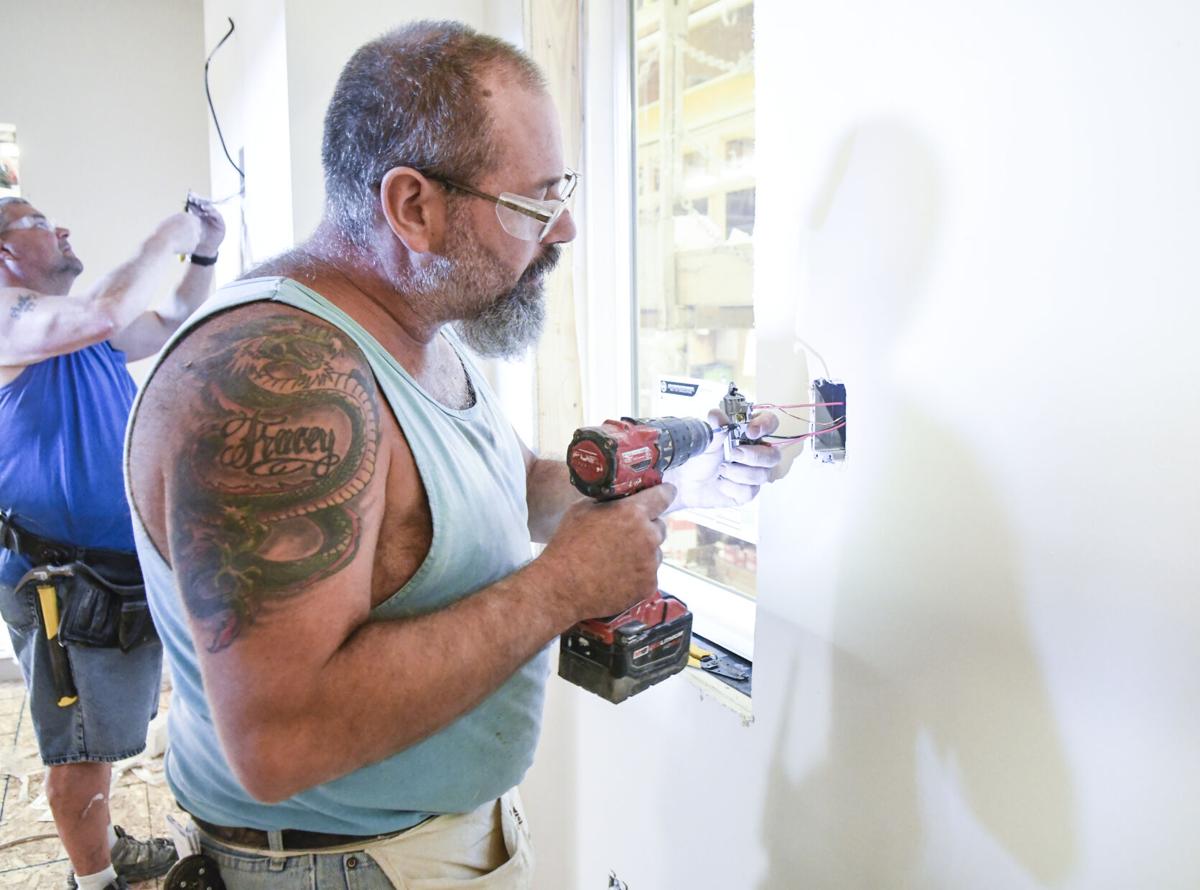 Electrician Brad Dreese works on a switch inside of a home at Apex Homes in Middleburg on Thursday. 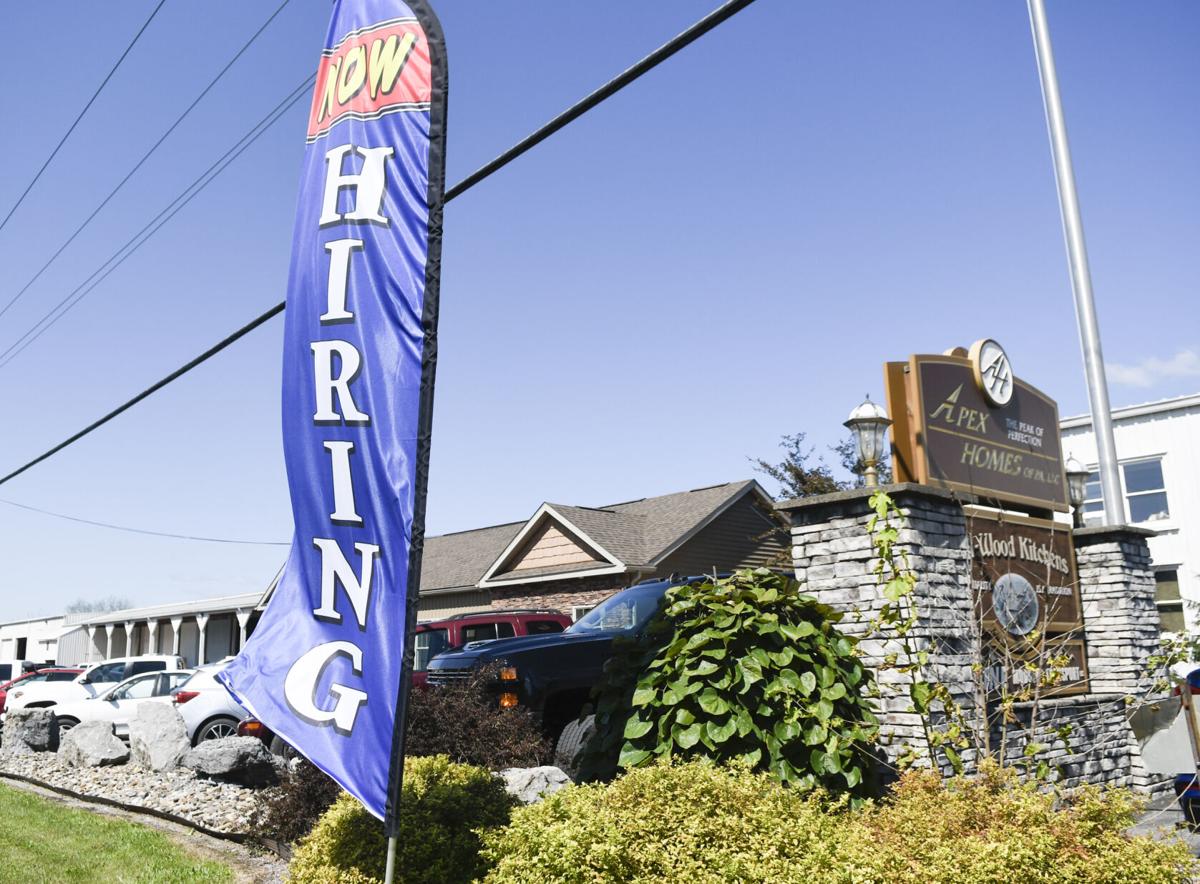 A now hiring sign stands outside Apex Homes in Middleburg. 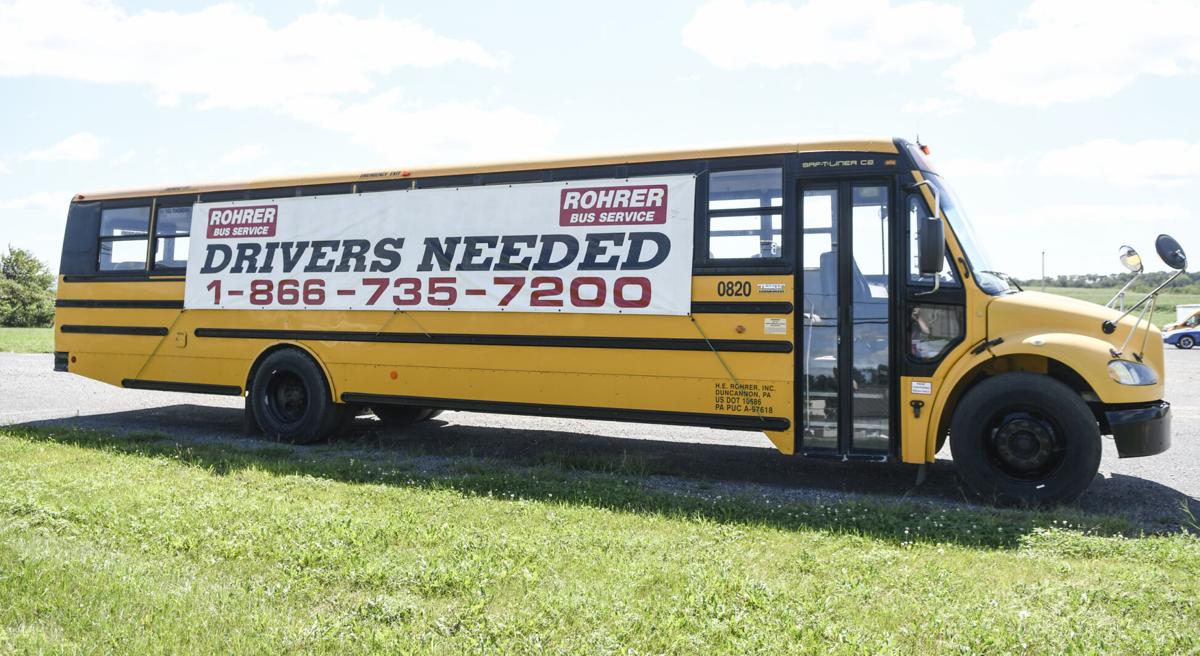 Robert Inglis/The Daily Item This bus along Route 522 is advertising the need for school bus drivers in the area. 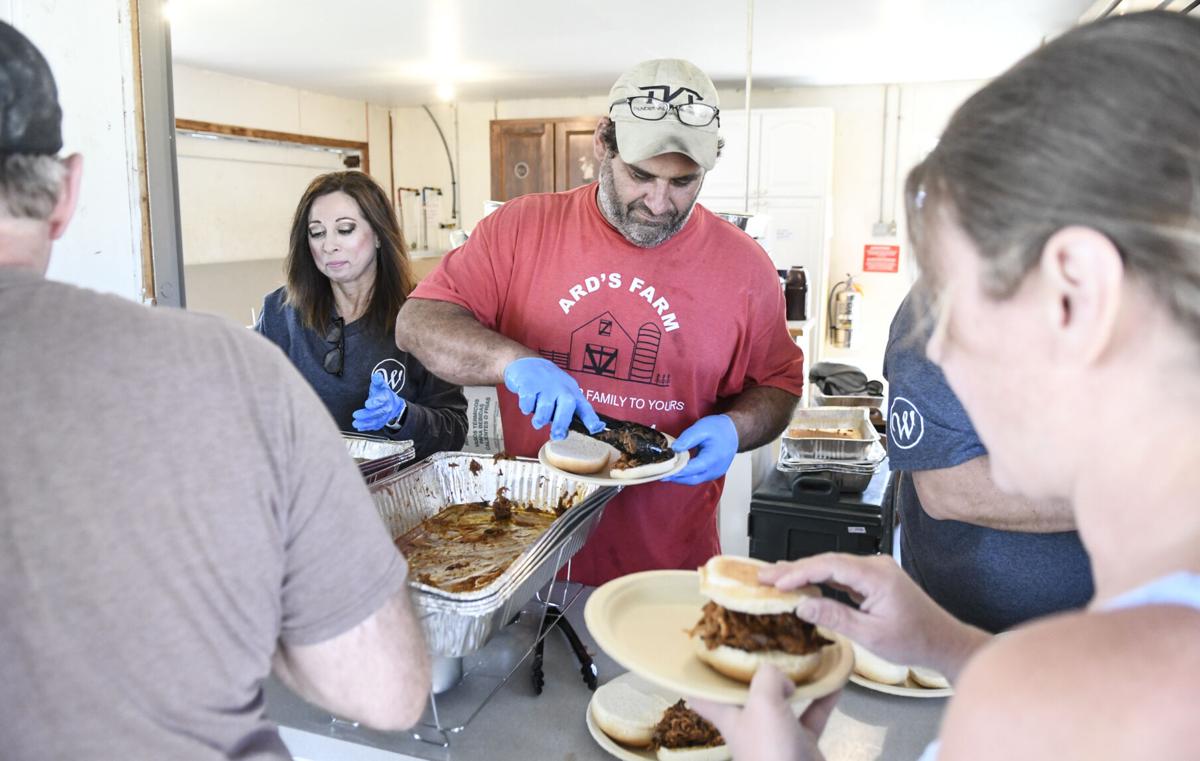 Alan Ard of Ard’s Farm Market serves up lunch during a catering event. 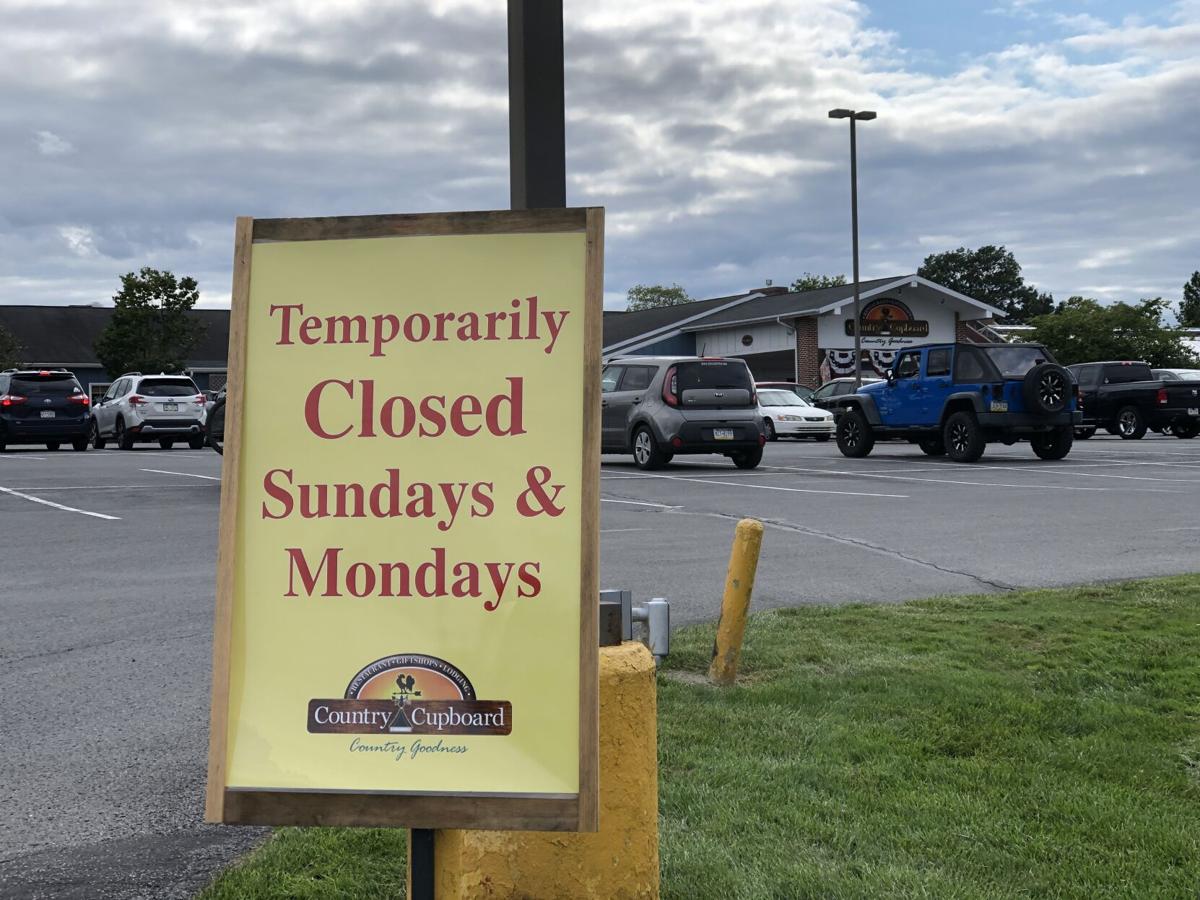 A sign at one of the driveway entrances to the Country Cupboard in Lewisburg announcing their reduced hours because of a staff shortage.

Robert Inglis/The Daily Item Lewis Blessing measures out a board at Apex Homes on Thursday afternoon.

Robert Inglis/The Daily Item This bus along Route 522 is advertising the need for school bus drivers in the area.

Bob Garrett shuddered when he heard in late August that Country Cupboard in Lewisburg would be closing on Sundays.

“There are families that have a 50-year tradition of having Sunday brunch at the Country Cupboard,” said Garrett, president and CEO of the Greater Susquehanna Valley Chamber of Commerce.

They had no choice but to temporarily close on Sundays, in addition to Mondays, due to a shortage in staff, said Chris Baylor, CEO of Baylor-Hamm Companies & The Prescott Real Estate Group which owns the Country Cupboard and Best Western Hotel. Baylor said the move is not permanent, but the shortage hasn’t changed since the announcement last month. He said they expect to return in October, the start of their busiest holiday season.

“We are so short on staff that our current staff is stressed out” having to work longer hours and different shifts, he said. “We could probably hire more than 100 people. We are short in every department and it’s not just the hospitality industry that’s affected. It’s manufacturing, medical and universities. We’re just puzzled by it. Where did all these people go?”

Garrett said the nationwide labor shortage — 8.4 million people were unemployed in August, according to the Bureau of Labor Statistics — is “extremely complex” and not being caused by a single issue.

Experts have cited several factors leading people to opt out of the workforce, including the additional unemployment benefits established in the March 2020 CARES Act which expire Monday; concerns about COVID-19, the lack of transportation and child care and ability to work from home.

Garrett expects the labor shortage crisis will wane a bit when an estimated 7.5 million Americans lose the enhanced unemployment benefits, including the extra $300 weekly supplement, on Monday, driving many back to work.

“I think it will help,” he said. “The (unemployment compensation program) has outlived itself. It was an excellent idea early in the pandemic, but what we’d like the government to do now is assist people to get back into the workforce. We don’t have enough people for the economy at this point.”

Stressful situationsApex Homes of PA President Lynn Kuhns sounds tired, and admits he is as he and his 120 employees for months have been working 50-hours a week at the Middleburg plant.

Instead of the usual four-day, 10-hour work week, employees are working five 10-hour days because he can’t fill about 15 positions. He said he would be able to fill about 50 more if materials were available.

“We’ve had a 20 percent reduction in production because of a raw material shortage and lack of labor,” he said. “It’s very stressful. We’re fortunate to have business, but we can’t grow because we can’t find truck drivers, plumbers, electricians. Every department in the company is affected.”

To give workers a break, he’s shutting down production one Friday a month and increased wages three times in the past nine months.

Kyle Ard had to close the dining room at Ard’s Farm Market in Lewisburg on Mondays and Tuesdays and reduce dining hours so overworked employees could rest.

“We were working our full-time staff 50 to 60 hours a week,” she said. “To maintain quality of life we had to close. We couldn’t keep abusing the people who have stayed with us.”

It’s a similar scenario at Furmano Foods in Northumberland, where company President Chad Geise has been unable to fill about 30 full-time, well-paying positions which has “put a strain on our existing team.”

To ease the emotional toll and burnout of the 350 full-time employees, he has given pay raises and been holding special monthly events, including a cookout and games like the one that had him sitting in a water-dunking tank.

The long-term implications of the labor shortage concern Geise, who like other business owners, is considering investing in automation which eventually could lead to fewer jobs being available.

In the short term, he expects prices to rise as the supply chain slows even more.

“We’re on the front end of an inflationary period,” he said. “What’s going to happen to the person who was struggling before when prices continue to rise?”

Getting creativeThe medical profession has long been dealing with hiring challenges in clinical areas such as nursing, EMTs, paramedics and medical laboratory specialists because of a nationwide demand that has outpaced the supply of workers, said Rachel Smith, vice president of People and Culture at Evangelical Community Hospital in Lewisburg, but the shortage has become more acute during the pandemic.

Added to that challenge is the “physical, emotional and mental toll” the pandemic has had on longtime health care workers who are now choosing to leave direct patient care positions, she said.

“The pandemic has challenged our recruitment teams to think outside of the box with not only where we recruit, but also in what we are offering to show Evangelical as a desirable place of employment for job seekers,” said Smith.

Geisinger is also getting “creative” with sign-on bonus programs aimed to attract candidates to difficult or high-priority positions in addition to its health care and other employee benefits, said Jeff Lowry, director of recruitment at Geisinger.

He said the Danville-based health system is having trouble finding people to work in direct patient care and non-clinical positions, ranging from nursing, phlebotomy, environmental services and food services.

“Each one of our employees plays an important part in caring for our patients and contributing to the overall health and wellness of the community,” he said.

Also dealing with a higher than usual number of open positions is Susquehanna University due to what Human Resources Vice President Jennifer Bucher attributes to people making life changes during the pandemic.

“Our experience has been that ... some have decided to move closer to family, others have chosen to change industries to pursue passions and others have chosen to reduce their time at work by transitioning to part-time work,” she said. “Despite these challenges, we believe we will be able to fill our open positions by building and keeping robust candidate pools, offering competitive compensation and creative benefits that support a multigenerational workforce, and offering interim on-campus housing if necessary.”

On Friday, the Susquehanna University Board of Trustees took action to recognize employees who continued to work during the health crisis and approved both a base-salary increase and a one-time bonus which will be effective Sept. 20, Bucher said.

A chance to win a new vehicle is how Knoebels Amusement Park in Elysburg tried to lure workers this summer. The drawing for the 2021 Chevy Trailblazer, which was open to any employee 16 or older who worked a minimum of 250 hours, will take place Monday, spokesman Stacy Yutko said.

Despite the opportunity to win a new car, plus a mid-season $1 an hour raise, scholarships and other benefits, Yutko said, employment at the park peaked this summer at about 78 percent of its pre-pandemic workforce.

Geise is hopeful disengaged workers will soon return to the workforce and consider working at Furmano’s.

“We’re celebrating our 100th anniversary this year and we want to make sure we’re here for another 100 years,” he said.

At Country Cupboard, which is nearing its 50th year in business, Baylor said he expects to resume Sunday dining services in October.

After closing the restaurant completely for 102 days during the height of the COVID-19 pandemic, Baylor said, the dining room hasn’t reopened to 100 percent capacity and he doesn’t know when it will.

“It’s been a burden on our industry, but all businesses have the same struggle,” he said.