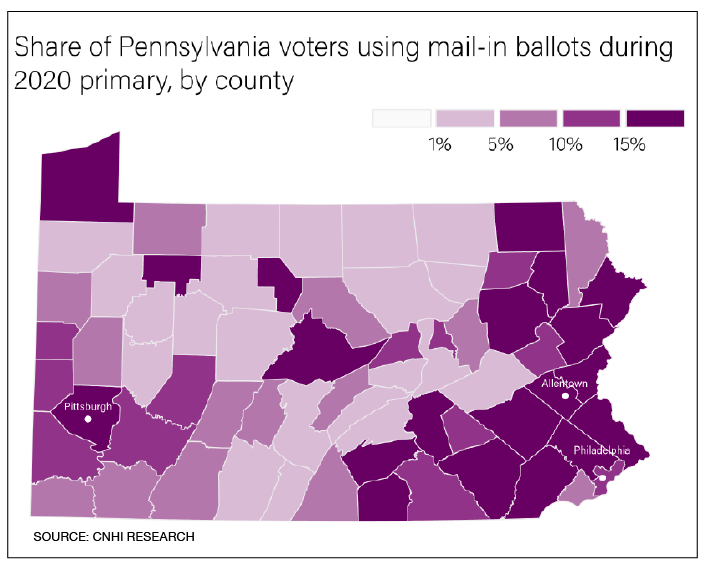 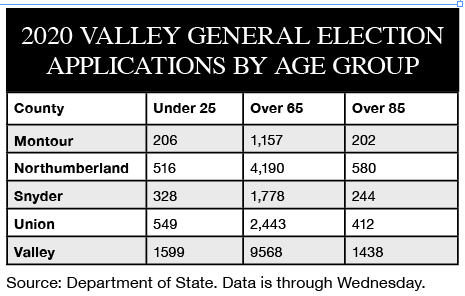 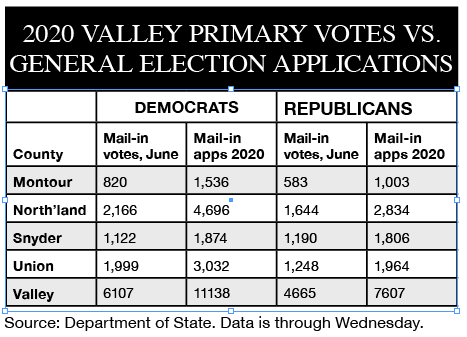 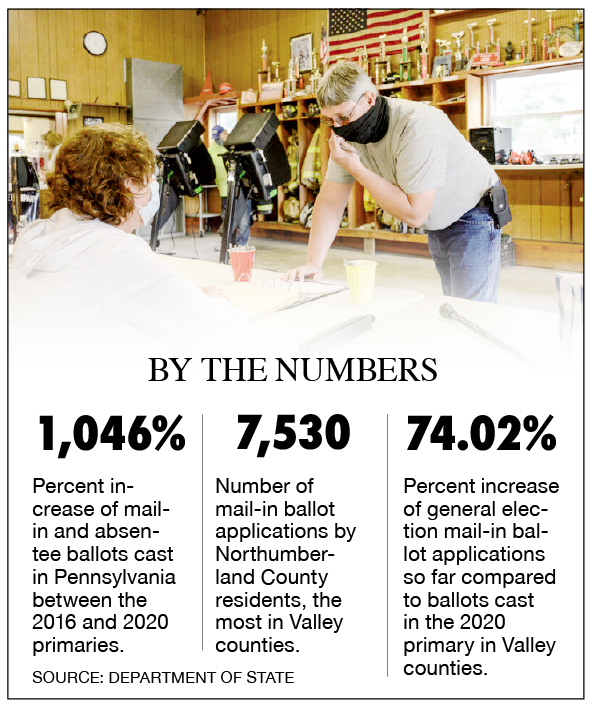 HARRISBURG — The number of Pennsylvania voters seeking mail-in ballots is approaching 2.5 million and the Nov. 3 election is still three weeks away.

“We had nearly 1.5 million mail-in votes in the primary,” Secretary of State Kathy Boockvar said on Wednesday. “We already have 1 million more applications than those that voted by mail in the primary.”

Democrats accounted for about two-thirds of the ballots mailed in June.

Voters under the age of 25 have accounted for about 8% of the mail-in ballot applications submitted to vote in the Nov. 3 election, so far.

In June, 600,000 of the state’s mail-in votes came from just Allegheny County, Philadelphia and the suburban counties around Philadelphia — Bucks, Chester, Delaware and Montgomery. But while Democrats accounted for two-thirds of the mail-in votes statewide, in those areas Democrats outvoted Republicans in mail ballots by a margin of 5-to-1, according to data the Department of State provided to CNHI Newspapers.

Those same counties account for 1.3 million, or more than half of the mail-in ballot applications received by the state for the Nov. 3 election, according to state data. And about 950,000 of the 1.3 million mail-in ballots from those urban and suburban areas are from Democrats, the state data shows.

The partisan divide over mail-in voting has been stoked repeatedly by President Donald Trump, who has called into question the credibility of election results heavily influenced by mail-in voting.

Pennsylvania does not have universal mail-in voting. Voters seeking to vote by mail must apply for a ballot by providing their driver’s license number or a portion of their Social Security number, and only receive one after county election staff verify that the voter is eligible to vote.

Even so, Trump in a campaign stop in Harrisburg in late September said that mail-in voting would result in fraud.

“The only way (the Democrats) can win in Pennsylvania, frankly, is to cheat on the ballots,” Trump said.

Claims linking mail-in voting to widespread fraud have been debunked by researchers, said Christopher Deluzio, policy director for the Institute for Cyber Law, Policy and Security at the University of Pittsburgh. Deluzio said he intends to vote by mail.

Pennsylvania was “shrewd” to update its election law to allow no-excuse, mail-in voting, he said.

In other states “mail-in voting has a long history of being reliable and secure,” Deluzio said.

One of the advantages of mail-in voting is that it involves the use of paper ballots so that if there are questions about the results, the ballots will be available for auditing to verify the count, he said.

Attorney General Josh Shapiro, a Democrat, in an interview with CNHI newspaper editors, said that he’d voted by mail in the June primary and added, “I wouldn’t hesitate to do it again.”

Shapiro pointed to the variety of options counties now have — such as drop boxes and early voting sites — that have given people new ways to use the mail-in ballot expansion to vote without going to the polls.

“They are all safe and effective,” Shapiro said.

But Trump supporters at the president’s Harrisburg campaign rally are skeptical.

“My worry is that in places like Philly where there are massive numbers of people voting by mail and how do you keep track of them or who’s really filling out the ballot,” said Ron Fink of Lancaster County.

Michael Denk of Lewisberry, said he thinks “the potential for fraud is limitless” with mail-in voting.

Denk said people who want to vote should be willing to go to the polls in person.

“The only person who thinks that’s a good idea is someone who thinks they need it to win the election. They can’t have their people come out and vote,” he said.

Bethany Hallam, an Allegheny County councilwoman, said that while critics seem to suggest that mail-in voting is more likely to create fraud in urban areas, mistrust of mail-in voting is driven more by partisan leaning than where people live.

Hallam was the mastermind behind a social media campaign in which a group of female politicians posed topless with ballot materials placed in the appropriate places to draw attention to the concerns about naked ballots.

“99% of the people voting by mail are doing it for the first time,” she said. “It shouldn’t be confusing. But it is confusing.”

The naked ballot issue — a requirement that mail-in ballots be inserted into provided secrecy envelopes in order to be counted — is one of a handful of legal changes that could have dramatic implications on the election.

In a move that has prompted a scramble by election access advocates, the state Supreme Court concluded that the state’s mail-in voting law explicitly requires that ballots must be enclosed in secrecy envelopes when they are mailed, so counties are barred from counting so-called “naked ballots.”

Emily Kinkead, a Democrat who is unopposed in a bid for a state House seat in Allegheny County after upsetting the incumbent in the primary, said that there had been little attention given to the use of secrecy envelopes during the primary.

The state Supreme Court decision “moved the goalposts,” she said.

She was one of the politicians who joined Hallam in the naked ballot campaign to try to alert voters to the need to use the secrecy envelope while voting by mail.

In the same decision that barred counting of naked ballots, the state Supreme Court determined that counties should be allowed to offer drop boxes for people to deposit their mail-in ballots without using the postal service. The court also mandated that counties accept late-arriving ballots as long as they are postmarked by Election Day and arrive by the Friday after the election.

Concerns about late-arriving ballots were exacerbated by revelations that the U.S. Postal Service had made operational changes over the summer that were slowing down delivery times.

Shapiro led a lawsuit aimed at forcing the postal service to abandon any changes that would slow down delivery times.

Republicans have asked the U.S. Supreme Court to consider whether the changes dictated by the Pennsylvania Supreme Court should stand.

Boockvar said the Department of State has filed documents asking that the U.S. Supreme Court decline to take up that appeal, and indicating that if the court does decide to take a look at the decision that it do so as soon as possible.

Mailing It In: A look at mail-in ballots in battleground states