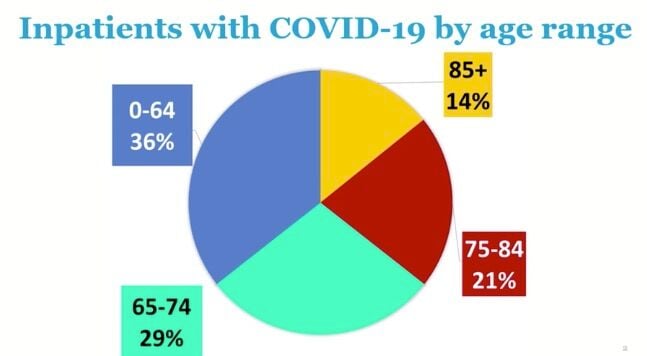 This screenshot from a media briefing Friday with Dr. Jaewon Ryu, Geisinger's president and CEO, shows COVID-19 inpatients by age as of 11:59 p.m. Thursday, Jan. 7, 2021. 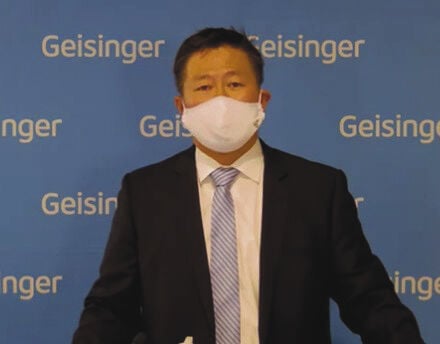 This screenshot from a media briefing Friday with Dr. Jaewon Ryu, Geisinger's president and CEO, shows COVID-19 inpatients by age as of 11:59 p.m. Thursday, Jan. 7, 2021.

The positive test rate at Geisinger for COVID-19 ballooned to 30% in the first week of January as much of the hospital system is operating at full capacity, Geisinger’s President and CEO Dr. Jaewon Ryu said Friday.

“We continue to see alarmingly high rates of infection and hospitalization,” Ryu said. “Many of our sites are at full capacity as they’ve been since early November and that’s projected to continue."

Ryu said the rate of positive tests and continued growth in hospitalizations — estimated at double the springtime peak — is evidence of community spread. Ryu stressed that 36% of Geisinger’s COVID inpatient population is younger than age 65. While the death rate in December was lower than in the spring, Ryu said it stood at 14% for those admitted to a system hospital.

Geisinger’s in-house lab test had a positive rate of 23 percent in December when about 400 tests returned positive daily, Ryu said. The second half of November saw about 240 return positive daily, he said, adding that the rate in the summer was about 2-3%.

To date, more than 32,000 tests returned positive at Geisinger during the pandemic, eclipsing the entire population of Williamsport by 3,000.

Geisinger administered more than 14,000 vaccinations and Ryu expects that figure to exceed 19,000 by the end of next week. He said there have been no documented cases at Geisinger of severe allergic reactions.

The vaccine is 95% effective but it’s not yet known if someone who was vaccinated can still contract and spread the virus, Ryu said.

Ryu estimated half of the hospital system’s employees have been vaccinated. More than 10% of the vaccinations were performed for recommended people, like non-affiliate frontline medical workers, outside the system’s employee population.

A person is vaccinated at Geisinger once every minute, Ryu said, and 300 people received their second of two shots this week to complete the vaccination. He said the vaccine has been slow to arrive and storage and handling is complicated. At this point, vaccinations shouldn’t be seen as the end of the pandemic, Ryu said, and he advocated continued vigilance with hand hygiene, masking and social distancing.

“We’re racing to make sure we can get (the vaccine) into people’s bodies as soon as possible,” Ryu said.

Hundreds of employees who contract COVID-19 or are confirmed exposed to the virus are out of work on any given day, Ryu added, stressing that employee availability is as important to a hospital’s capacity to treat patients as beds and ventilators.

“When we say we’re all in this together, we truly are. Whatever we can do to decrease the level of (virus) activity in the communities helps everybody,” Ryu said.