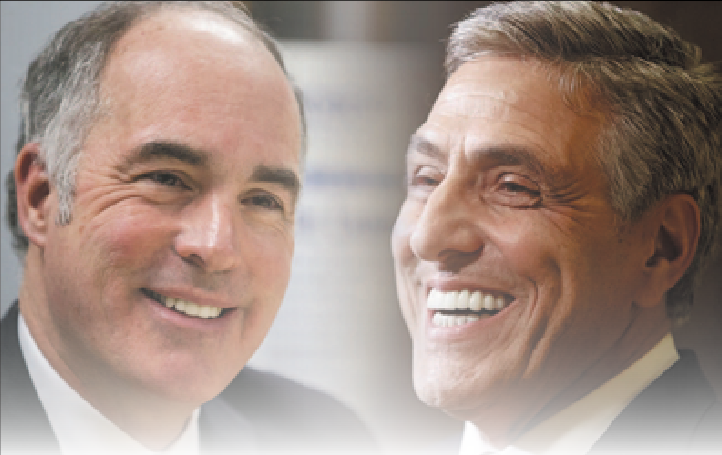 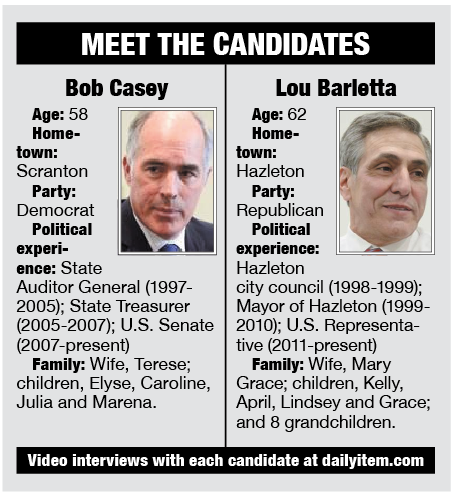 Bob Casey had more than 3 million votes six years ago, easily securing a second consecutive landslide victory to the U.S. Senate. As the Democrat from Scranton seeks a third term, he faces a Republican challenger who is accustomed to lopsided victories of his own and looking for an upset.

Casey, 58, identified earlier this year by Politico as one of the 10 most vulnerable Senate Democrats in the midterm, has consistently held a double-digit lead in polling this year over Lou Barletta, a four-term Congressman from Pennsylvania’s 10th District and one of President Donald Trump’s earliest supporters in the commonwealth.

The most recent poll from Franklin & Marshall College in Lancaster, released Thursday, had Casey with a 15-point lead across the state. However, 14 percent of registered voters remain undecided between Casey, Barletta, Green Party candidate Neal Gale or Libertarian Dale Kerns heading into the election. Barletta, 62, said he doesn’t put stock in polls, just people.

“I disagree with the polls,” Barletta said during a recent visit to The Daily Item’s editorial board. “They said Donald Trump wouldn’t win. What I hear is Democrats who voted for Donald Trump will have a hard time voting for Sen. Casey, who has resisted the president’s agenda.”

Casey was first elected to the Senate with a 17-point win over incumbent Rick Santorum in 2006. Six years ago, he won re-election by more than nine points. In his four victories since 2010, Barletta has won by an average of 21.8 percent, including a 10-point victory over Paul Kanjorski in 2010. He won by 33 percentage points in 2014 and by 27 two years ago.

The race has gotten heated in recent week, thanks in large part to a pair of debates and a television ad from Casey criticizing Barletta for multiple votes to repeal the Affordable Care Act, which, if it happened, would threaten insurance guarantees for people with pre-existing conditions.

The ad featured a woman whose twin daughters were diagnosed with cancer, saying, “If Lou Barletta has his way, kids like mine could be denied the care they need.”

Barletta’s grandson is undergoing chemotherapy for cancer diagnosed earlier this year. He blasted Casey for insinuating he could promote a policy that would keep his grandson from getting the care he needs.

“What does he think my daughter and my family is going to feel every time the commercial comes on? Is he proud of himself? Does he want to win that bad?” Barletta said before the ad was pulled down in the Scranton market last month.

Casey apologized. “I’ve never had to endure the pain” that Barletta’s family has been experiencing, he said. “I would never take action to intentionally add to that pain.”

Still, Casey maintained the issue of coverage for people with pre-existing conditions is extremely important and promised to continue to fight for it. Casey said health care and the fight over the future of the Affordable Care Act are the most important issues in the election. Barletta, of Hazleton, continues to campaign on repealing the ACA.

Both candidates maintain they want to keep protections for pre-existing conditions.

“I’ve led the fight to expand access to affordable health care, secure protections for 5.3 million Pennsylvanians with pre-existing conditions, and strengthen the programs Pennsylvanians depend on — but there is still more work to do,” Casey said. “With the administration going to court (in Texas), taking the position the Affordable Care Act is unconstitutional, the official Republican Party position is those protections for pre-existing conditions don’t matter and that those protections are at risk.”

“Being in the house for 6 years where we’ve repealed the Affordable Care Act, there should have been a plan to replace it,” Barletta said. “The principles were good and right: Allow people to shop, allow competition, get the government out of the way. Nobody should be denied health care because of pre-existing conditions. Nobody. There is never going to be a plan that does that.”

Another factor will be President Trump.

Barletta was one of the president’s earliest supporters ahead of the 2016 election and the president has appeared several times with the representative on the campaign trail. Casey has been a vocal critic of the president, particularly on immigration and now seeks a repeat victory in a state Trump won by fewer than 50,000 votes.

Trump, on the campaign trail for Barletta, has called Casey “Sleeping Bob.”

“I’ve got to talk about Bob Casey, I’ll start falling asleep,” President Trump said at a rally in Wilkes-Barre this year. “Don’t fall asleep while we talk about sleeping, Bob.”

“I don’t think Sen. Casey has done anything for us,” former Northumberland County Republican party chairperson Beth Kremer said. “He raised all this money because of his name, where as Lou Barletta cares about the residents. I hope he wins this election and proves all the polls wrong.”

Casey’s supporters think the senator’s views make him a more clear representation of the commonwealth.

“I think he (Casey) is a much more moderate candidate and more representative of the people in Pennsylvania.” Union County Democratic Chairperson Rick Thomas said. “He has done a fine job and deserves to be a re-relected.”

Barletta maintains this year’s economic growth is the result of Trump’s tax-cutting bill and rollback of regulations. In a late October debate in Pittsburgh, he challenged Casey to explain how a policy under President Barack Obama could have contributed to it.

Casey countered that Obama and a Democratic Congress dragged the country out of recession and back to health, cutting the unemployment rate in half under Obama, without help from Republicans.

The two have also sparred on immigration.

Barletta called the slow-moving migrant caravan bound for the United States an “invasion” and said they are coming because Casey and other Democrats support a “catch-and-release” policy that lets in migrants and helps them hide in sanctuary cities.

Casey argues that Barletta and the Republicans have had eight years in the majority in the House and have done nothing on immigration.

“They don’t want to solve the problem,” Casey said. “They want to use this issue to divide people.”

The Associated Press contributed to this story.