Union County Elections won’t send a nonpartisan voter guide from the League of Women Voters of the Lewisburg Area to each of 26 polling stations for Tuesday’s election after the county Republican Committee challenged the practice as illegal and likened it to electioneering.

Greg Katherman, elections director, said he’s following the guidance of county solicitor Ryan Tira, who reviewed a formal complaint lodged Monday by county Republican Party chair Carolyn Conner. Katherman’s decision precedes a county election board meeting Monday where the matter will be discussed. He doesn't expect the board to overturn the move.

The voter guide lists candidates from each race, includes responses from candidates of all parties concerning designated issues and, this year, has information about a ballot question for East Buffalo Township. There are no endorsements made in the publication, and there are no other known nonpartisan voter guides available specific to Union County.

Reached for clarification, Conner said she takes no issue with the content published in the voter guide. Its distribution with "official" election materials and sustained presence inside voting areas throughout election day are what’s in dispute, she said. 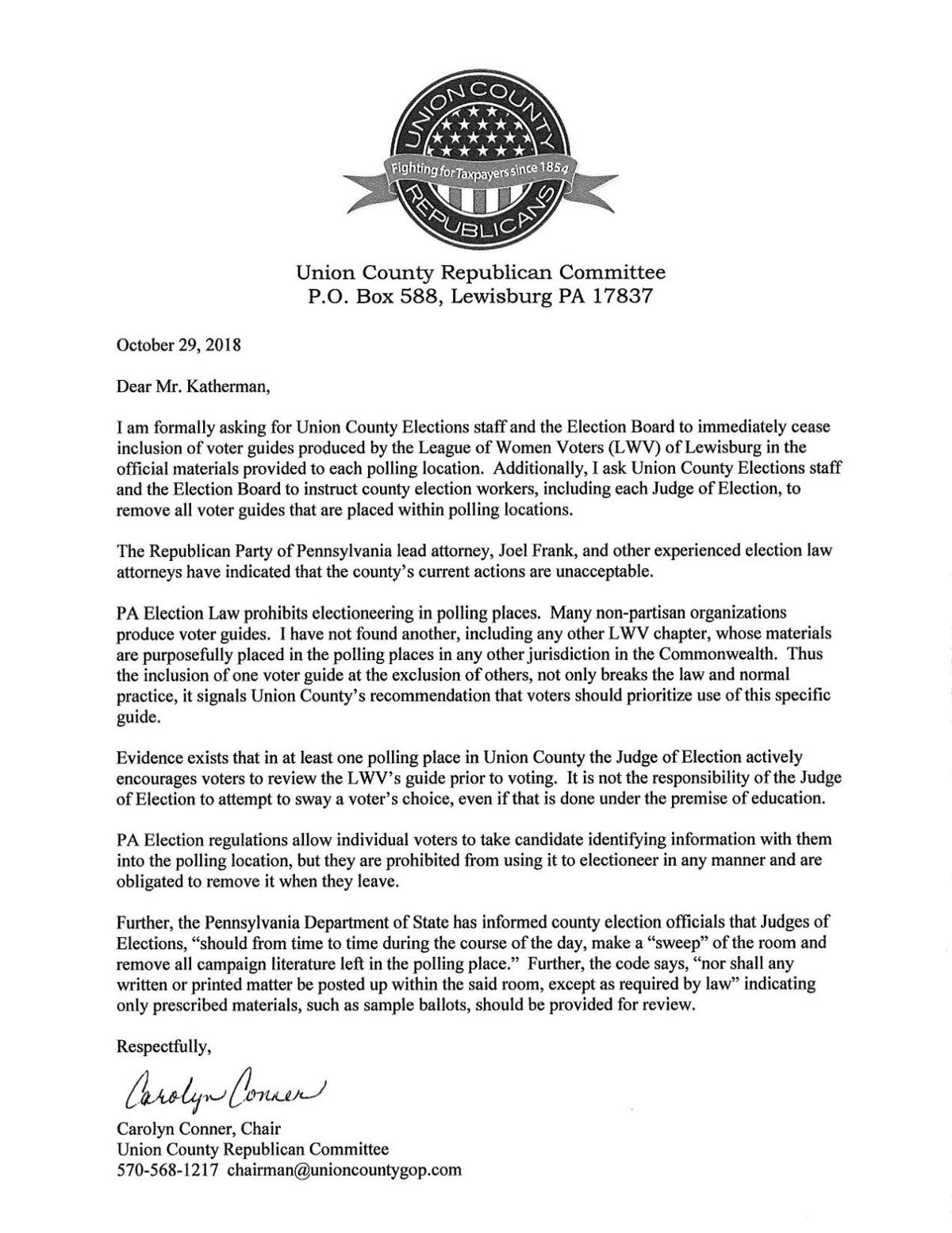 “PA Election Law prohibits electioneering in polling places,” Conner wrote in a letter to Katherman. “Many nonpartisan organizations produce voter guides. I have not found another, including any other (League of Women Voters) chapter, whose materials are purposefully placed in the polling places in any other jurisdiction in the Commonwealth. Thus the inclusion of one voter guide at the exclusion of others, not only breaks the law and normal practice, it signals Union County’s recommendation that voters should prioritize use of this specific guide.”

Katherman estimated the League of Women Voters guide has been sent to polling stations for 50 years.

“It’s not going out this year,” Katherman said. “We are not distributing it.”

Though the county won’t allow poll workers to keep a copy on hand for voter reference, Katherman said the law allows individual voters to carry guides and similar materials with them directly to the poll and refer to it while voting. He said there’s one caveat: When the voter leaves, the materials can’t stay behind. Voters must take the materials or poll workers must dispose of the materials themselves.

“We’re shocked. We’re taken aback. We don’t know what we have done wrong. We’re nonpartisan. We try to be so careful about the voter guide,” said Mary Zimmerman, Lewisburg League president. “We have gotten a couple of complaints about how we handled things this cycle but they came from the Democrats.”

Zimmerman said it’s not likely the League will be able to staff every polling station, open to close, in order to provide election guide access to voters on site. A digital version of the guide is available at lwvlewisburgarea.org.

Republican Preston Boop is the chairman of Union County Commissioners and a member of the election board. In charging the League is beginning to act on political ideation, Boop cited the lawsuit brought by the Pennsylvania League of Women Voters that led to redrawn congressional districts in the state. 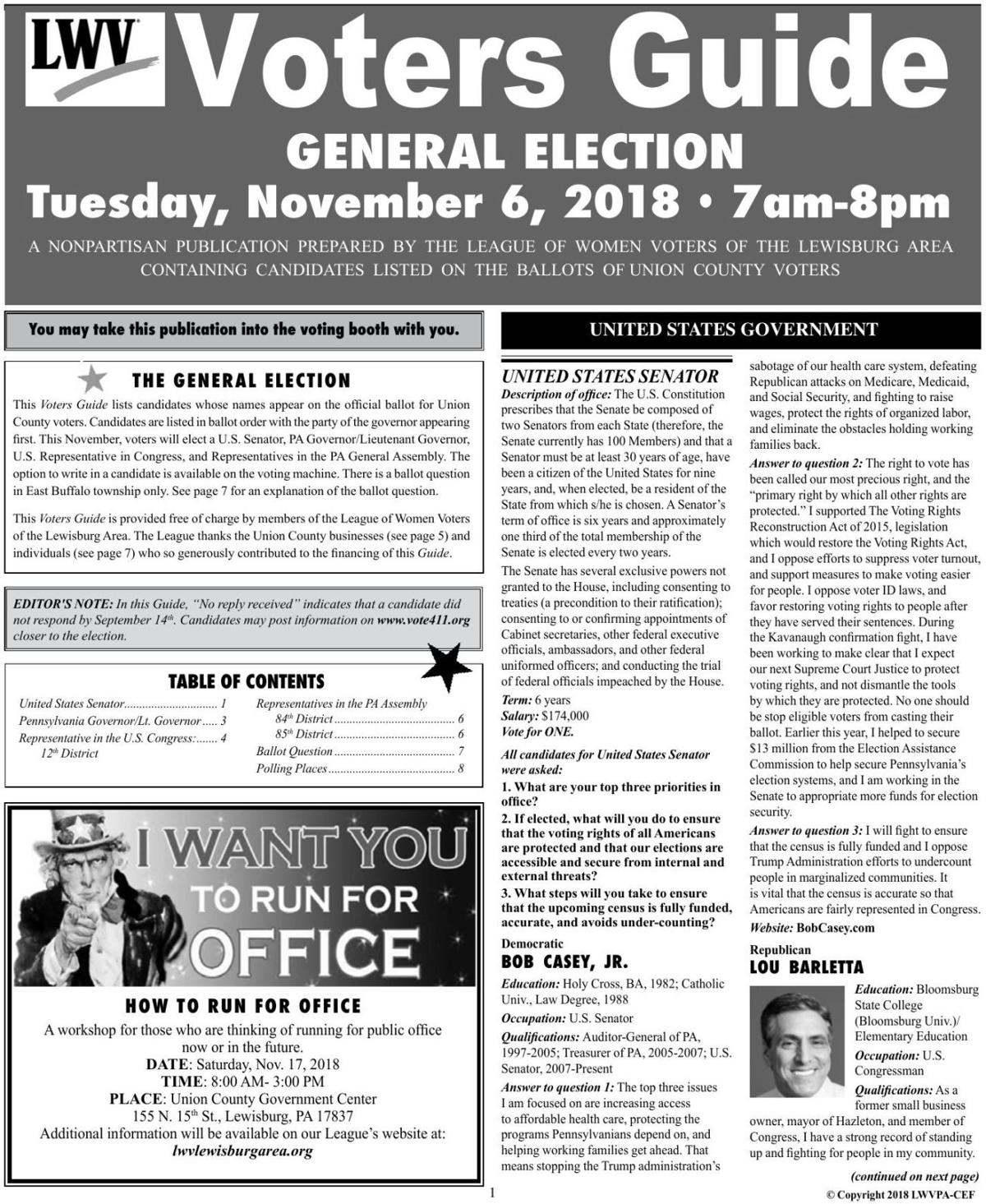 Zimmerman denied Boop’s accusation that the local chapter is left-leaning.

“Some members of the League feel we should take a stronger stance on issues. The minute you start taking a stance, you’re going to be partisan one way or another. So far the Lewisburg League hasn’t thrown its weight into a number of conceivable issues partly because we wanted to avoid being partisan on one side or another,” Zimmerman said.

County Commissioner John Showers, a Democrat, dismissed Boop’s assessment of the League’s behavior. He said the local chapter acted in good faith since the 1950s to educate voters with no favor to any political party. He said he can’t remember a time in his life when there wasn’t a League voter guide at a Union County poll site.

“I do understand there’s no legal basis for it to be there, but it ends this long tradition,” Showers said, adding the guide’s intent is simply to educate voters on candidates and issues. “To treat their guide as a partisan issue, it’s just sad.”

Rick Thomas, chair of the Union County Democrats, said he’d never heard of voter guides being kept inside voting areas. Conner alleged an unnamed judge of elections “actively encourages voters to review the LWV’s guide prior to voting.” That might be “above and beyond,” Thomas said, but overall the Lewisburg League’s guide is “unbiased and neutral,” an attempt to educate the electorate.

“If we can’t do that then I think we’ve come to a pretty ugly place,” Thomas said.