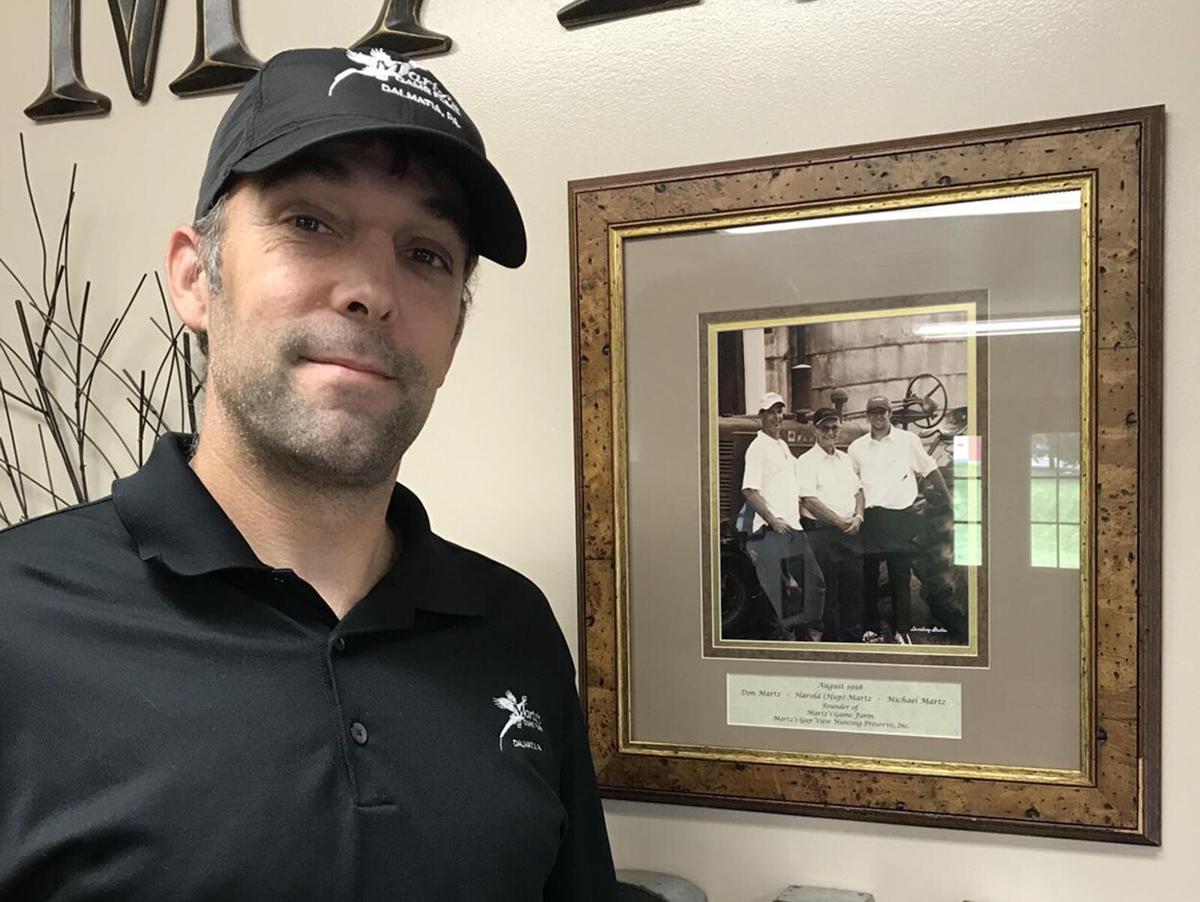 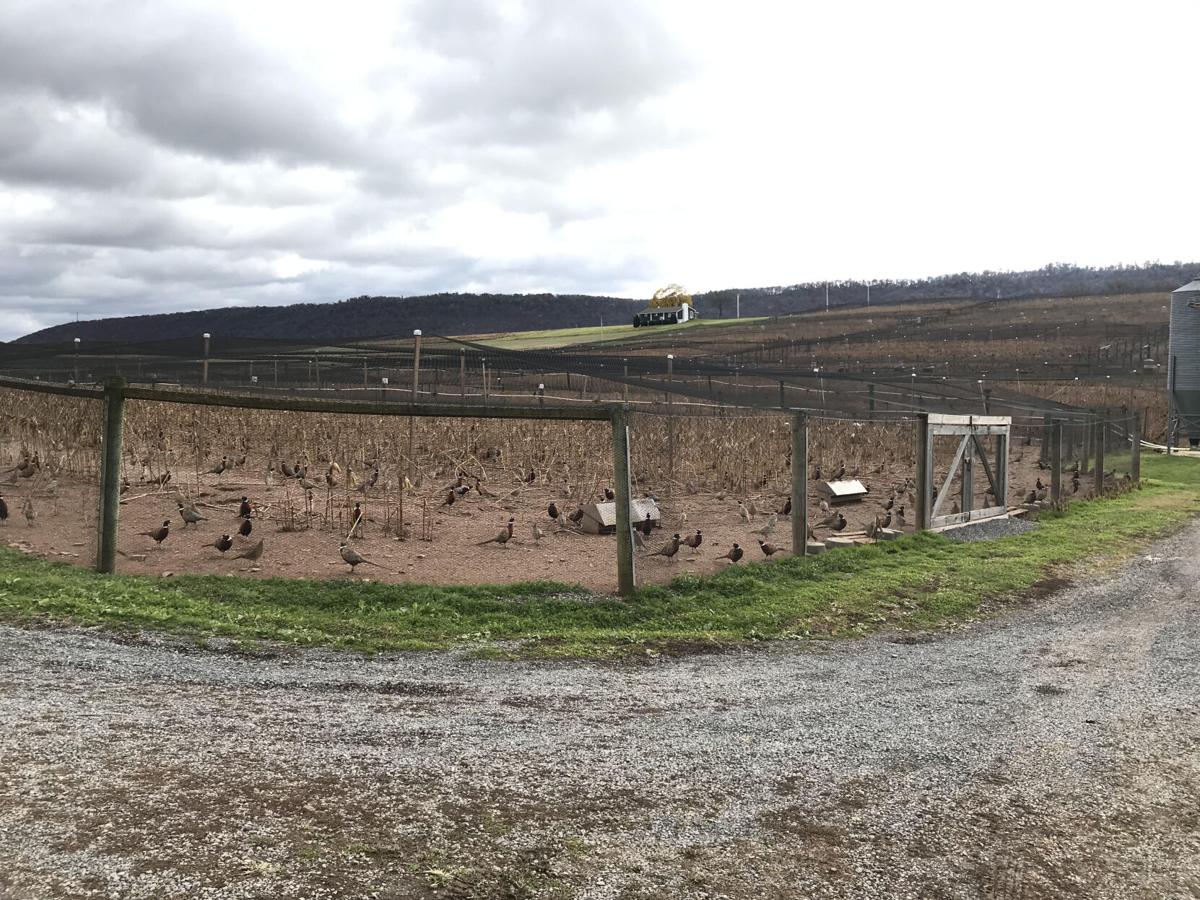 First-time visitors to Martz’s Gap View Hunting Preserve, in Dalmatia, often gasp at their first sight of the flight pens—acres and acres of wood-framed chicken wire enclosures—stretched out across the rolling Pennsylvania hills. 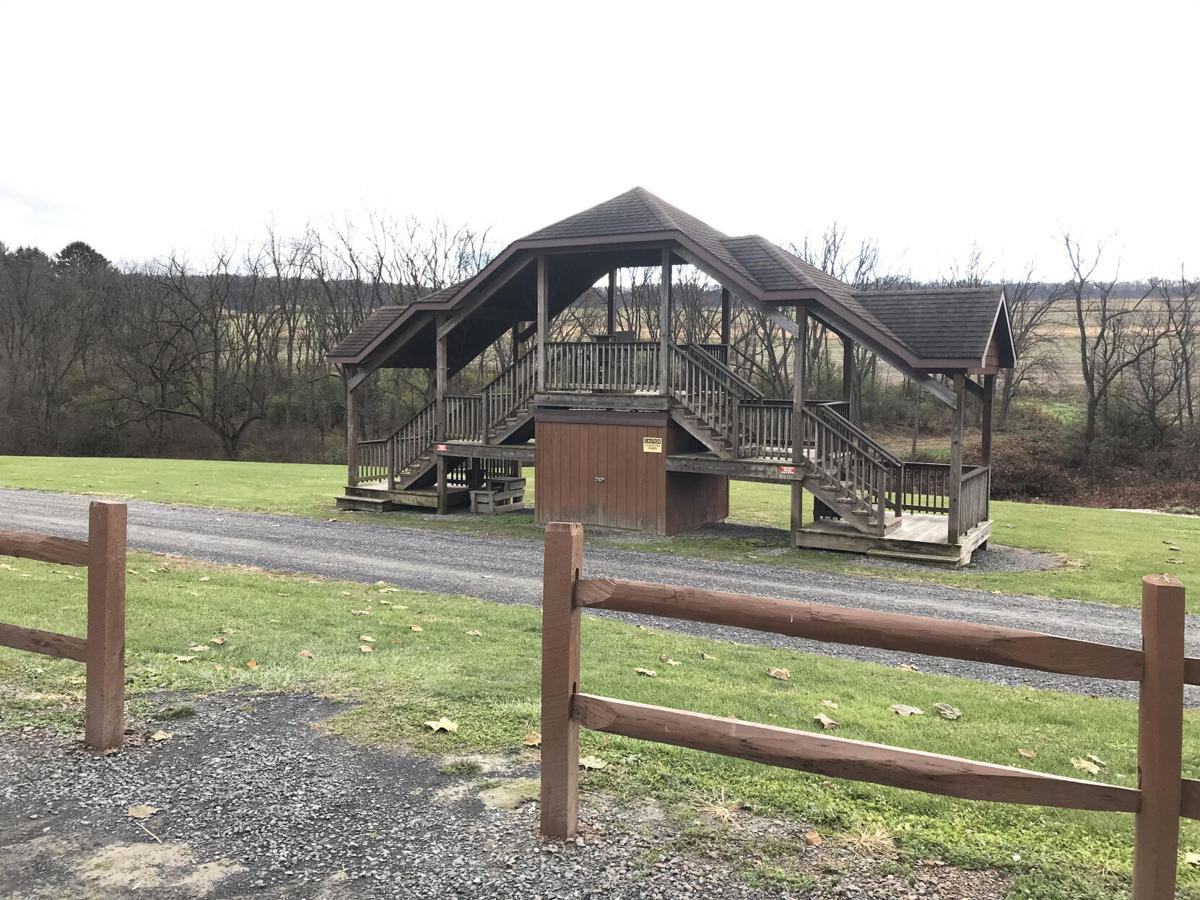 When shooting from the wobble trap, guests can try to hit 25 targets thrown from one location in 64 possible different directions. 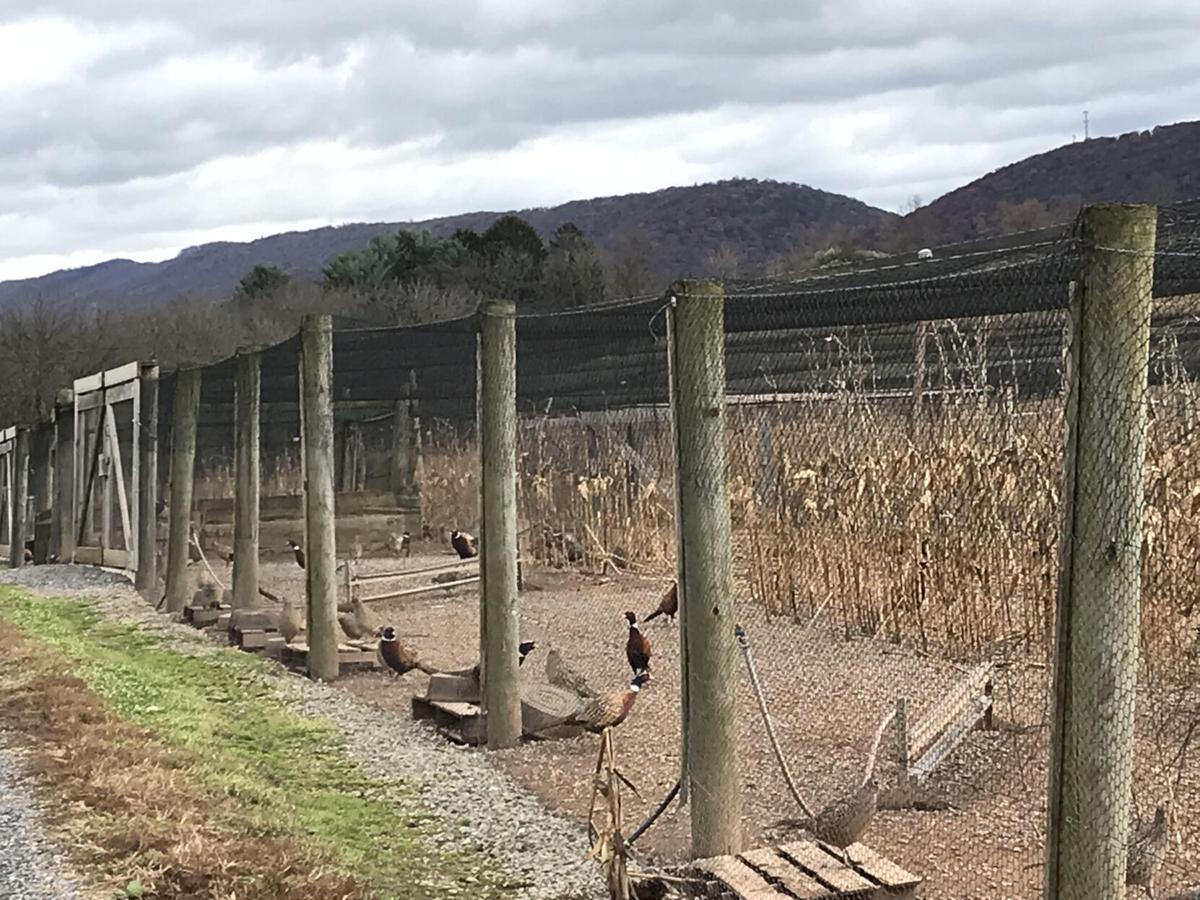 Flight pens are planted with corn, lambs quarter and other natural vegetation, which shelters the growing chicks from rain and sun while they acclimate to the weather. 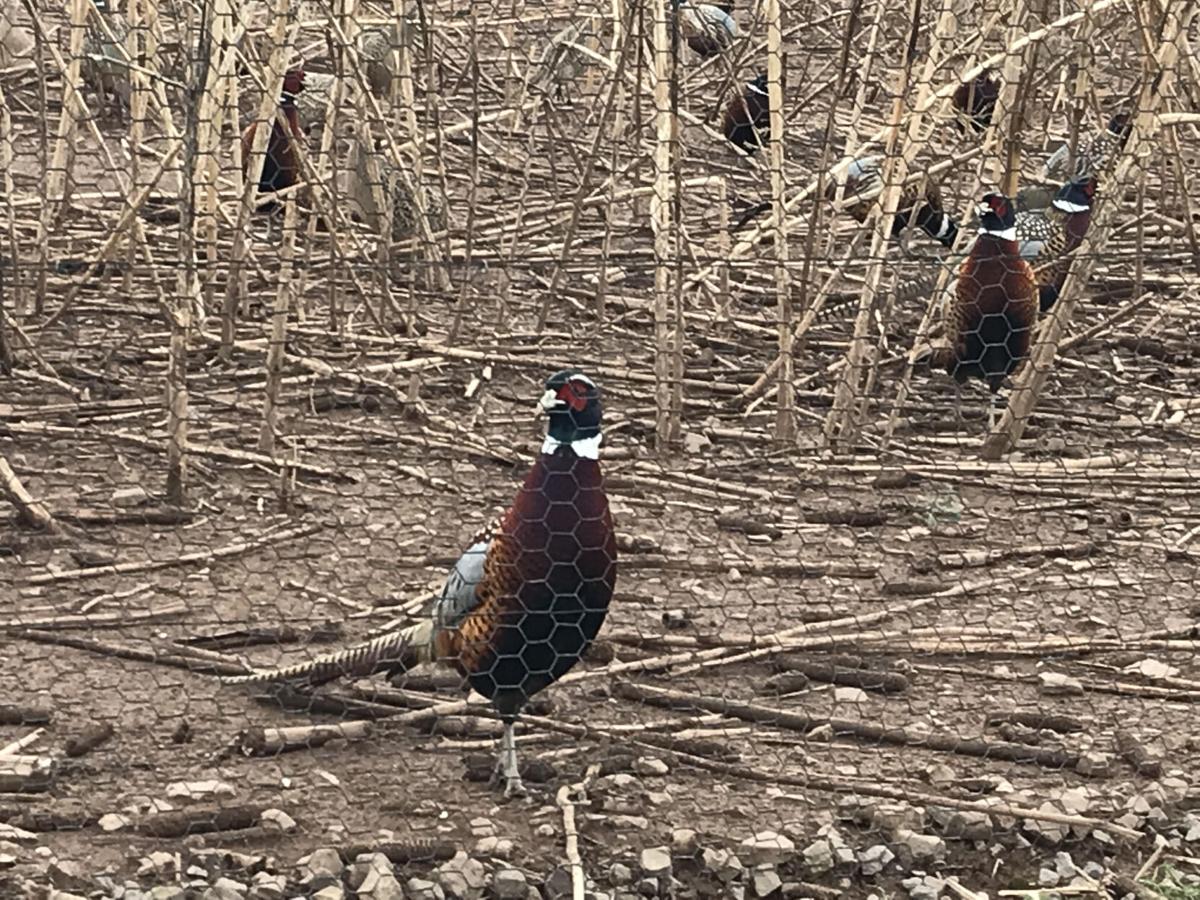 Ring-necked pheasants draw attention with their distinctive, straight, brown tail feather jutting out behind them like an exclamation mark, and those eye-catching, dark blue and green throat feathers stopping right at the line of white that circles their necks. 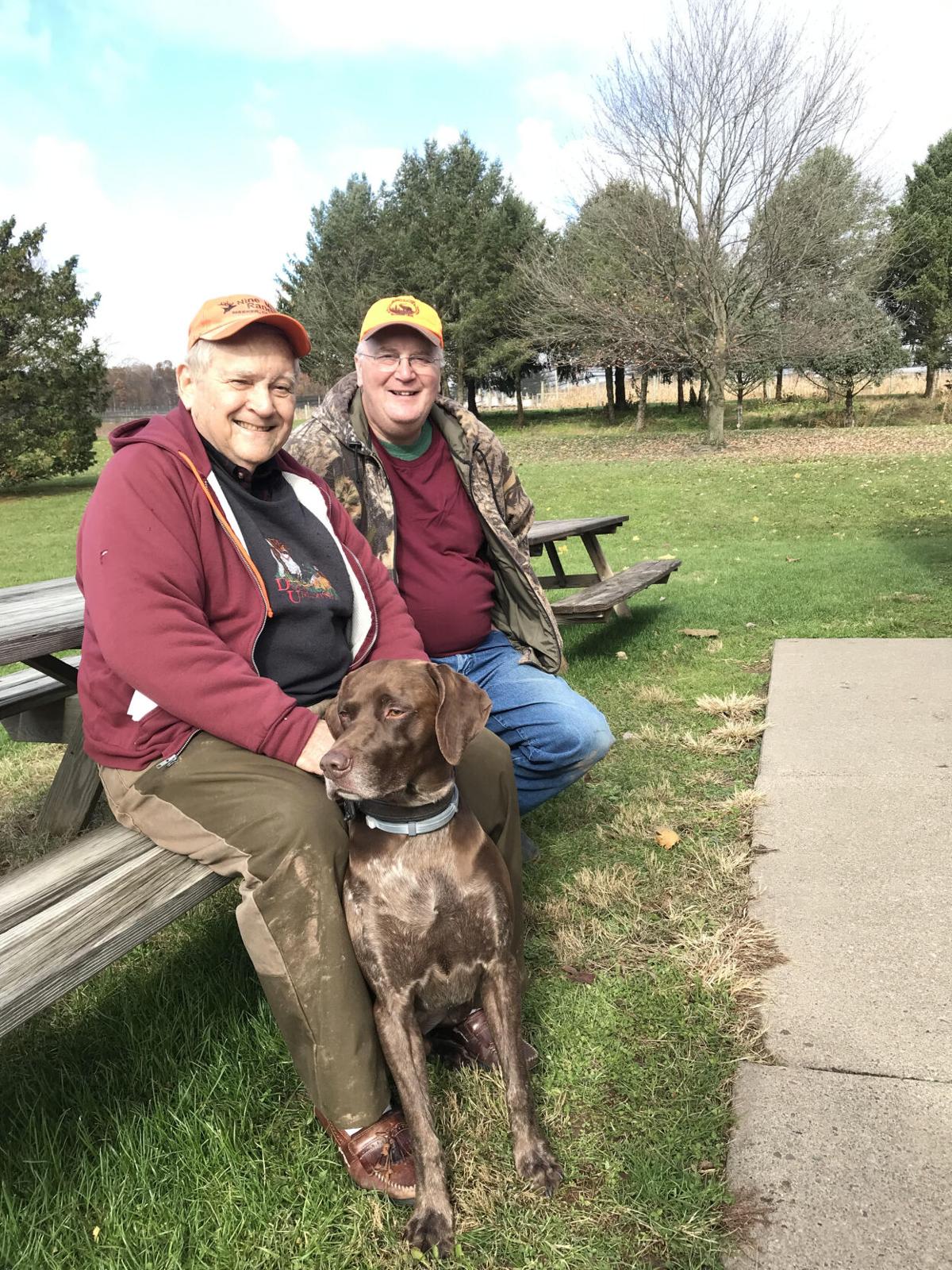 First-time visitors to Martz’s Gap View Hunting Preserve, in Dalmatia, often gasp at their first sight of the flight pens—acres and acres of wood-framed chicken wire enclosures—stretched out across the rolling Pennsylvania hills.

When shooting from the wobble trap, guests can try to hit 25 targets thrown from one location in 64 possible different directions.

Flight pens are planted with corn, lambs quarter and other natural vegetation, which shelters the growing chicks from rain and sun while they acclimate to the weather.

Ring-necked pheasants draw attention with their distinctive, straight, brown tail feather jutting out behind them like an exclamation mark, and those eye-catching, dark blue and green throat feathers stopping right at the line of white that circles their necks.

Go ahead and gasp. First-time visitors to Martz’s Gap View Hunting Preserve often do when they see the flight pens — 70 acres of wood-framed enclosures — stretched out across the rolling Pennsylvania hills.

Inside the pens are thousands of jaunty, ring-necked pheasants. With their distinctive, straight, brown tail feathers jutting out behind them like an exclamation mark, and those eye-catching, dark blue and green throat feathers stopping right at the line of white that circles their necks, they are easily recognizable. They, along with chukar partridges, are the main draw at Martz’s Preserve.

“Our most popular activity is upland game bird hunting,” said Mike Martz, third-generation owner of the Dalmatia preserve in Northumberland County. “We also have continental shoots, sporting clays and lodging. And we process the birds here for the hunters.”

Upland hunting takes advantage of the preserve’s more than 1,300 acres and offers 18 different hunting areas of 40 to 100 acres, each dedicated to an individual group of hunters. Terrain can range from light brush and cornfields to open fields, especially well-suited for youngsters and older hunters, while areas with heavier cover offer more of a challenge for seasoned hunters and their dogs.

Continental shoots simulate a European-style drive shoot, done from the comfort of blinds that keep shooters warm and dry even in rainy or snowy weather.

Guests can shoot sporting clays either from a field course or from Martz’s wobble trap. In the field course, guests walk through woods and fields to shoot at 50 clay targets simulating realistic hunting situations of running ground animals like rabbits and foxes or wild fowl like pheasants, quail and grouse. The wobble trap, a roofed, wooden structure accessed by steps at either end, uses one trap that throws 25 targets from one location in 64 possible directions.

Saturdays tend to get booked quickly, so hunters should call ahead for arrangements. Hunting is available from the third week of September through the end of March or early April.

“From April to September, we’re raising birds and farming our cash crops, corn, soybean and winter wheat. And the sporting clays and wobble trap are open,” Martz said. “It’s a lot of manual labor.”

From eggs to birds

“We collect eggs around four months out of the year, early March until early July,” Martz said. “About four times a day.”

About 90 percent of the eggs are laid in wooden nesting boxes filled with straw and wood shavings. The rest, called ground eggs, are collected by walking through the netting-covered pens.

Nurturing the eggs into full-fledged pheasants involves a number of strategic transfers. First, they are stored in a cooler at 55 degrees to prevent the embryos from developing. Every Thursday, the hatchery manager, Bob Whitsel, pulls trays out of the cooler and allows them to warm to room temperature over the course of 10 to 12 hours. On Friday morning, the eggs are slid into an incubator and gradually warmed to a cozy 99 degrees.

On Day 21, the eggs are transferred into hatching trays in a hatching machine, similar to an incubator. In a day or two the chicks start “pipping” out of their eggs, and by Day 24 they are taken to the brooding barns.

“That’s where they get the tender loving care,” Martz said with a smile. “They’re in there six weeks, roughly.”

From there they graduate to a flight pen planted with corn, lambs quarter and other natural vegetation. The plants shelter the chicks from rain and sun while they adjust to the weather.

“We keep an eye on the weather and give the birds the best chance of acclimating to their new environment,” Martz said.

Longtime friends and hunters Dale Meyer and John Rice, both of Duncannon, stopped in at Martz’s office after a sunny, November morning of hunting. It wasn’t their first time at the hunting preserve.

Pointing to Mike Martz, Meyer quipped, “I’ve been coming here so long, I can remember when his dad was young.”

“We like hunting pheasants here,” Meyer said, and pointing to Vinnie he added, “Mike’s wife usually gives him a cookie.”

“It’s always good to hunt with a dog,” said Rice, explaining that he used to bring groups from his workplace to hunt at Martz’s. “I just enjoy hunting with a dog.”

The men had released four pheasants and managed to shoot three, Meyer said.

“It’s a nice area, a nice cover for hunting. And nice people, especially,” he said. “You almost always have success, which you don’t always have if you go out and beat the bushes.”

Marz’s Gap View Hunting Preserve started in 1955 when Mike’s grandfather, Harold J. Martz, was approached by a group of 12 men about starting a club where they would pay him to raise birds for hunting. Within two years, the preserve opened to the public. Mike’s father, Don Martz, joined the business in 1980 and now considers himself “semi-retired.” Mike became a partner in 2002.

“As a third-generation operator, you don’t want to be the one that let things go backwards,” Mike Martz said. “That motivates me to try to pass it off to the fourth generation someday.”

He and his wife have two daughters, both attending Line Mountain High School. Having great employees that feel like family is another reason to keep the business going, Martz said.

“That motivates me to get up at four in the morning and basically work a 70-80-hour weeks a lot of time,” he said, then added with a shrug and a smile, “But I enjoy it, so it’s not like work a lot of times.”

That attitude of enjoying his work showed especially during the worst of the COVID-19 pandemic when, with hunting preserves allowed to remain open, Martz’s workday continued pretty much as usual.

“There were so many people that were going stir crazy, that when they came here they thanked us for staying open,” Martz said. “I thought the thanks really goes both ways, though, because I feel we were blessed to have them.”

Martz’s Gap View Hunting Preserve raises about 225,000 birds a year—185,000 pheasants and 50,000 chukar partridges, an upland game bird in the pheasant family. Martz’s is the second-largest bird preserve on the east coast. Mahantongo Game Farms, also in Dalmatia, is the largest.

“We deliver a lot of our birds out of state to hunting clubs,” owner Mike Martz said. “We only use about 13 percent of our birds here.”

For the past few decades, the Pennsylvania Game Commission has also raised pheasants to be released on state game lands. Why aren’t pheasants proliferating on their own?

Different factors affected the decline. The Pennsylvania Game Commission’s website listed several, including increased use of pesticides and herbicides, elimination of fencerows on agricultural lands, two hard winters in 1977 and 1978, and urban development. Martz also pointed to state-mandated protection of natural predators like hawks and owls.

“My opinion is, it was a perfect storm of things,” he said.

Regardless, the wild pheasant population dropped, and hunting preserves like Martz’s were needed to bring the numbers back up.

One event the Martz crew looks forward to each year is Wing Shooting Warriors and First Responders Day. The event, organized by Walt Bingaman and Jack Giblin of the Wingshooting Warriors Crew, offers a day of pheasant hunting, sporting clays and a picnic for up to 60 active-duty and veteran service members. Accommodations are made for wheelchair-bound or disabled hunters.

Martz’s Preserve also offers a special hunt each year that is half-price for veterans and everyone in their group. It’s a matter of showing respect for veterans, owner Mike Martz said, noting that his grandmother’s cousin, a World War II and Korean War veteran, had a big influence on him when he was a child.

“We certainly appreciate our veterans and try to do what we can do,” Martz said.