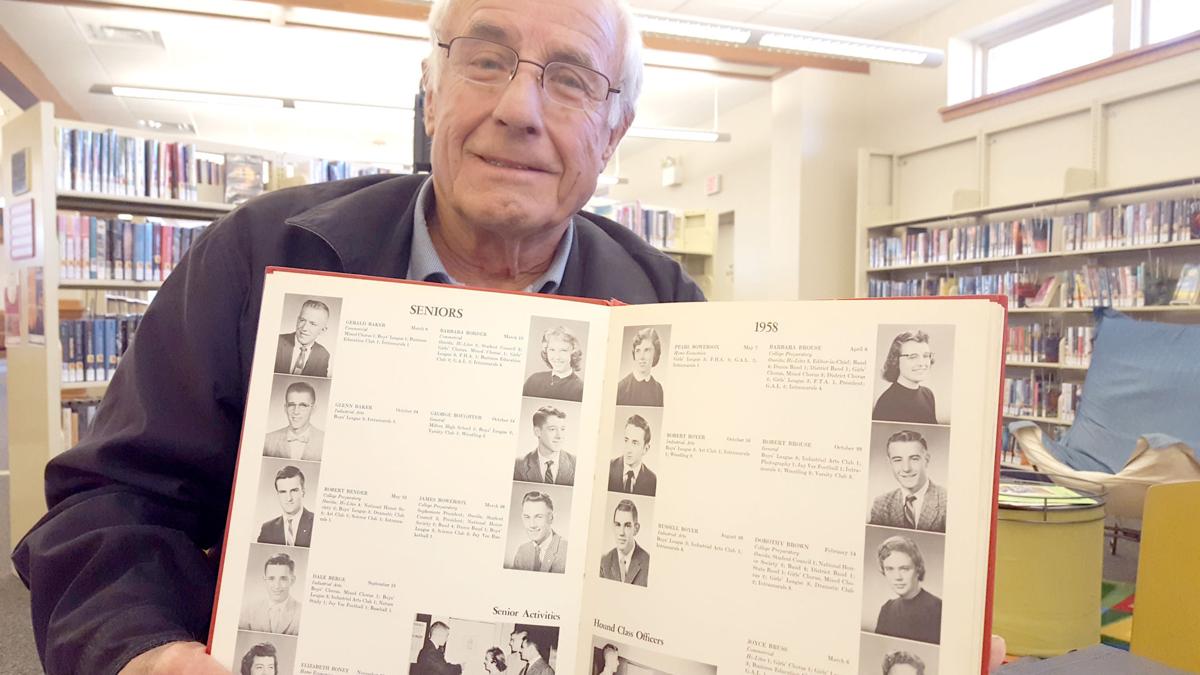 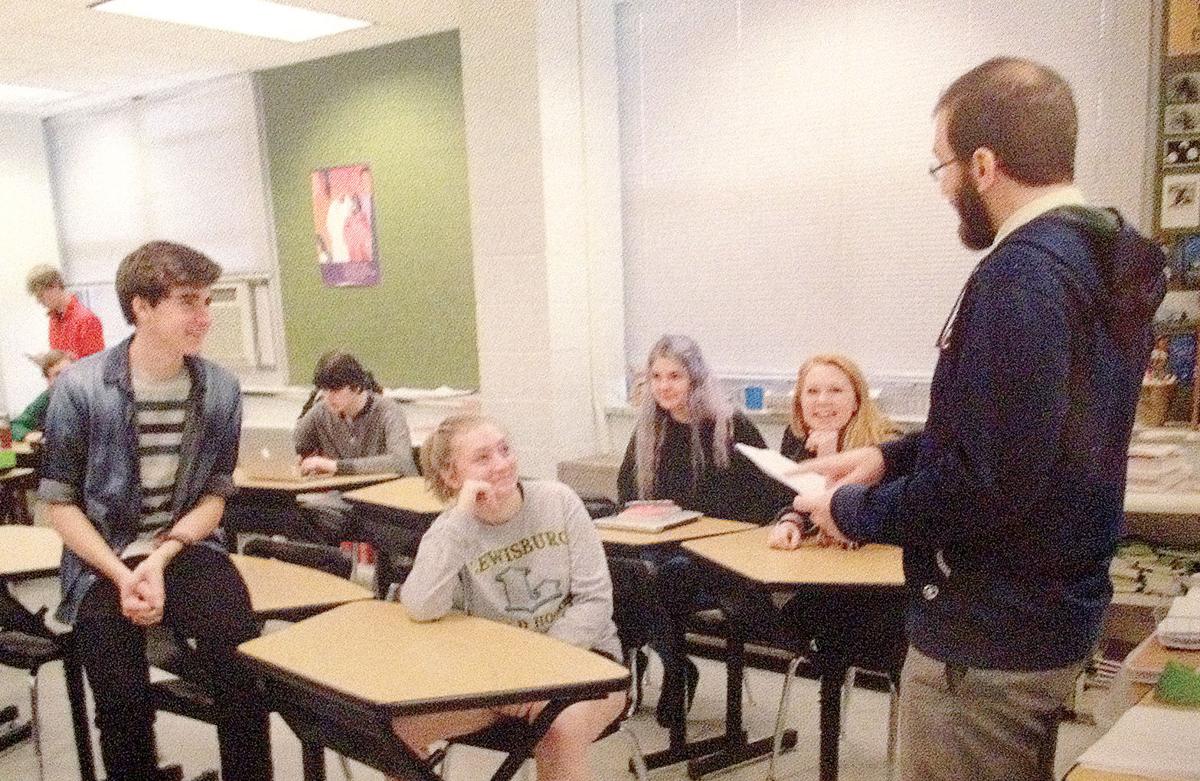 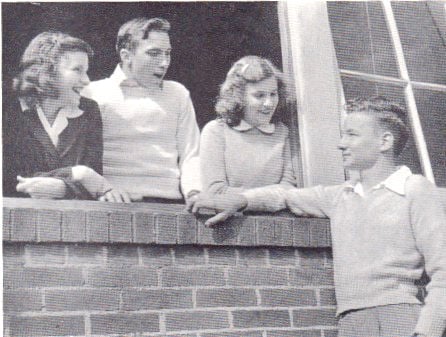 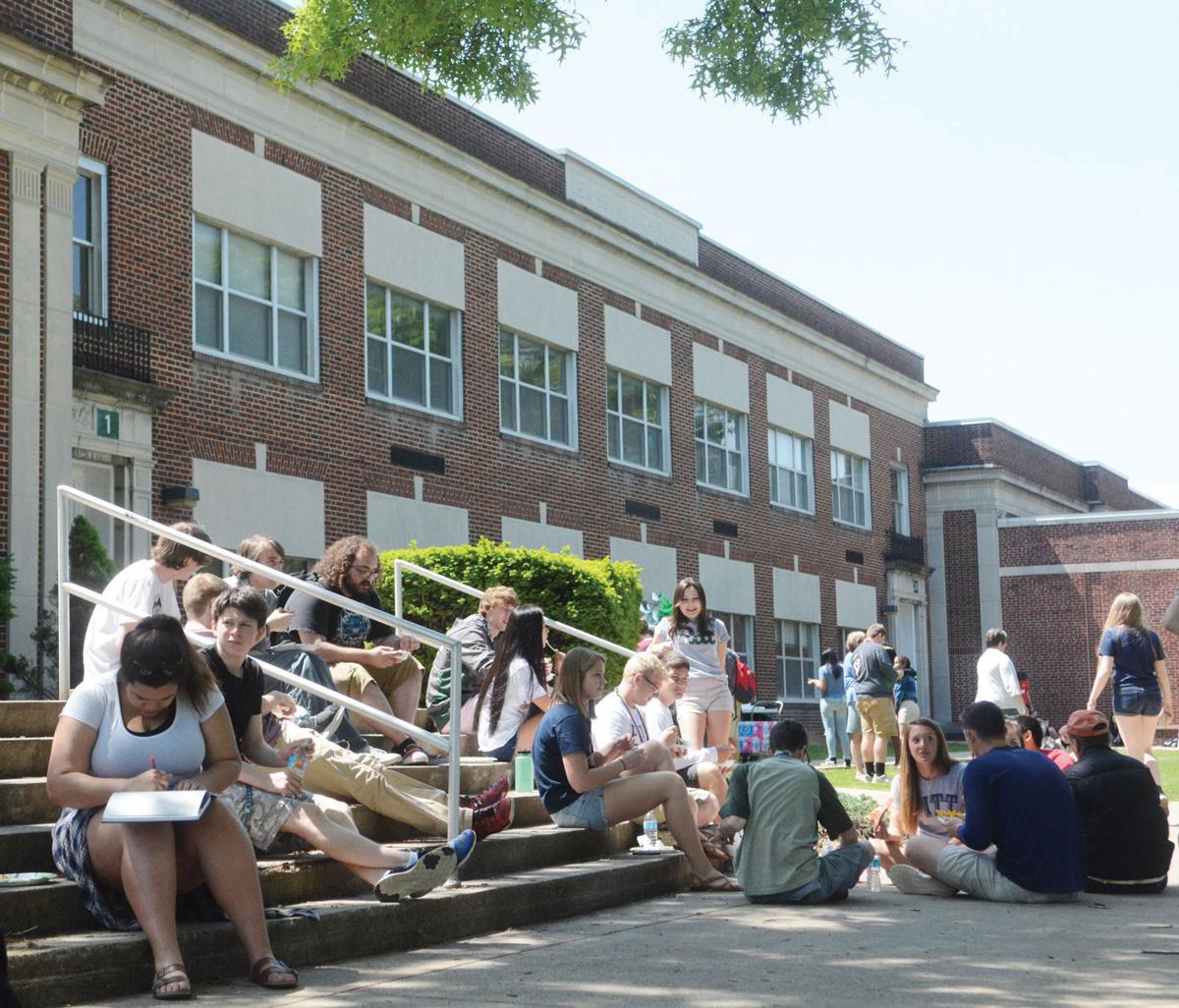 Students eat lunch in front of the LAHS building in 2016. 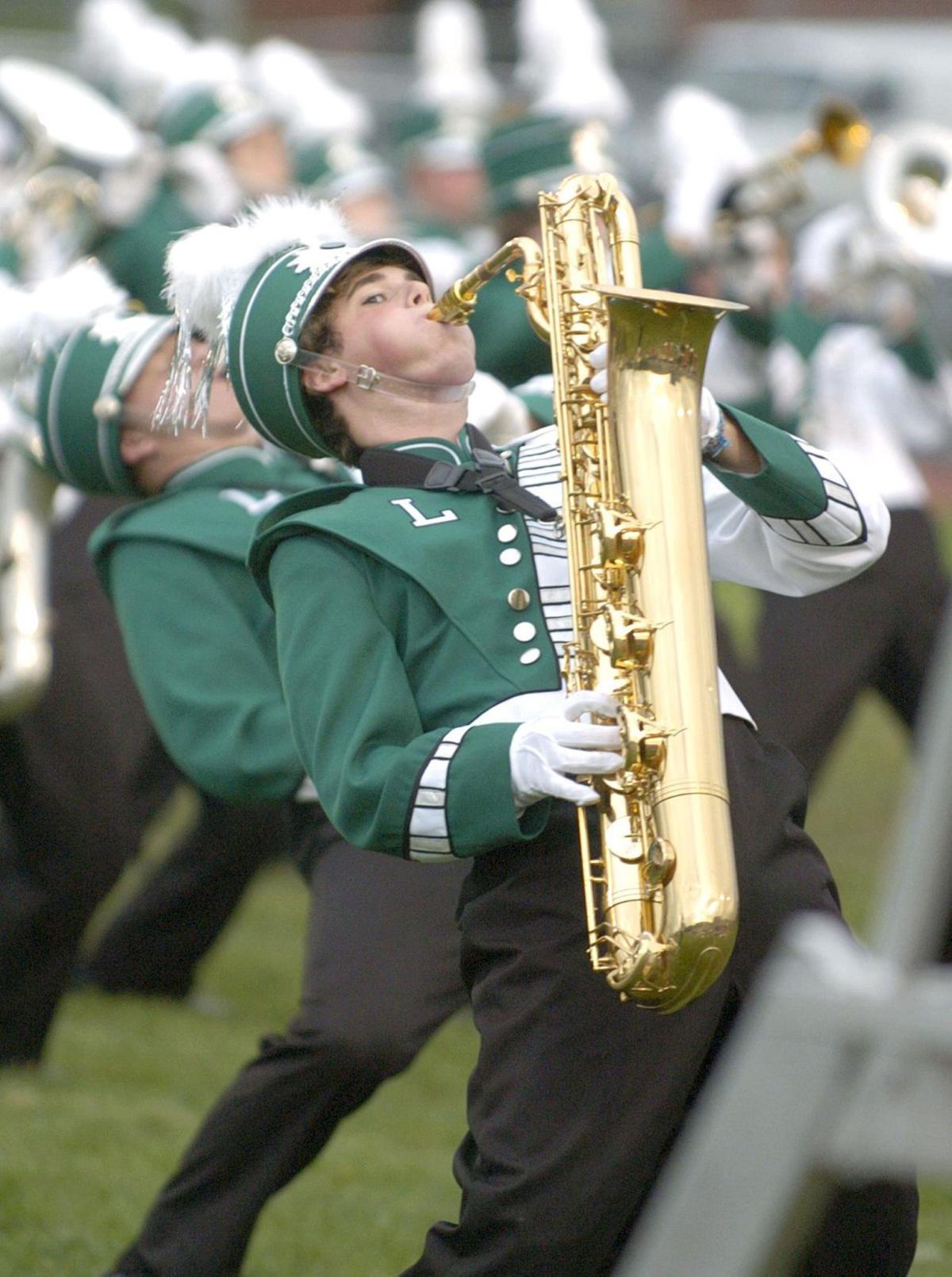 Nathan Wright plays his saxaphone along with the rest of the Green Dragon Marching Band in 2014. 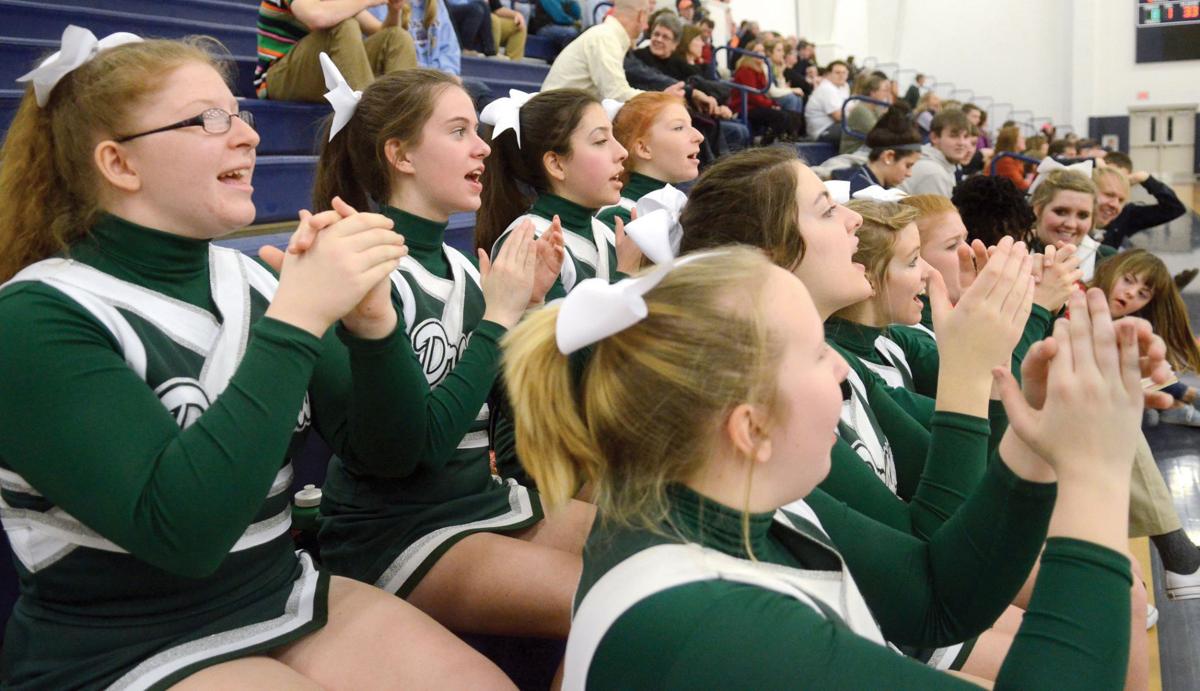 The 2014 LAHS cheer squad cheers on the boys basketball team. 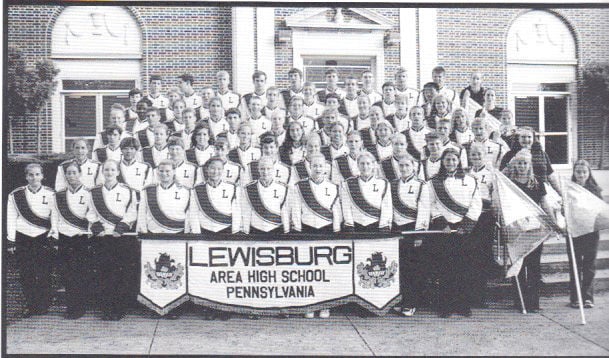 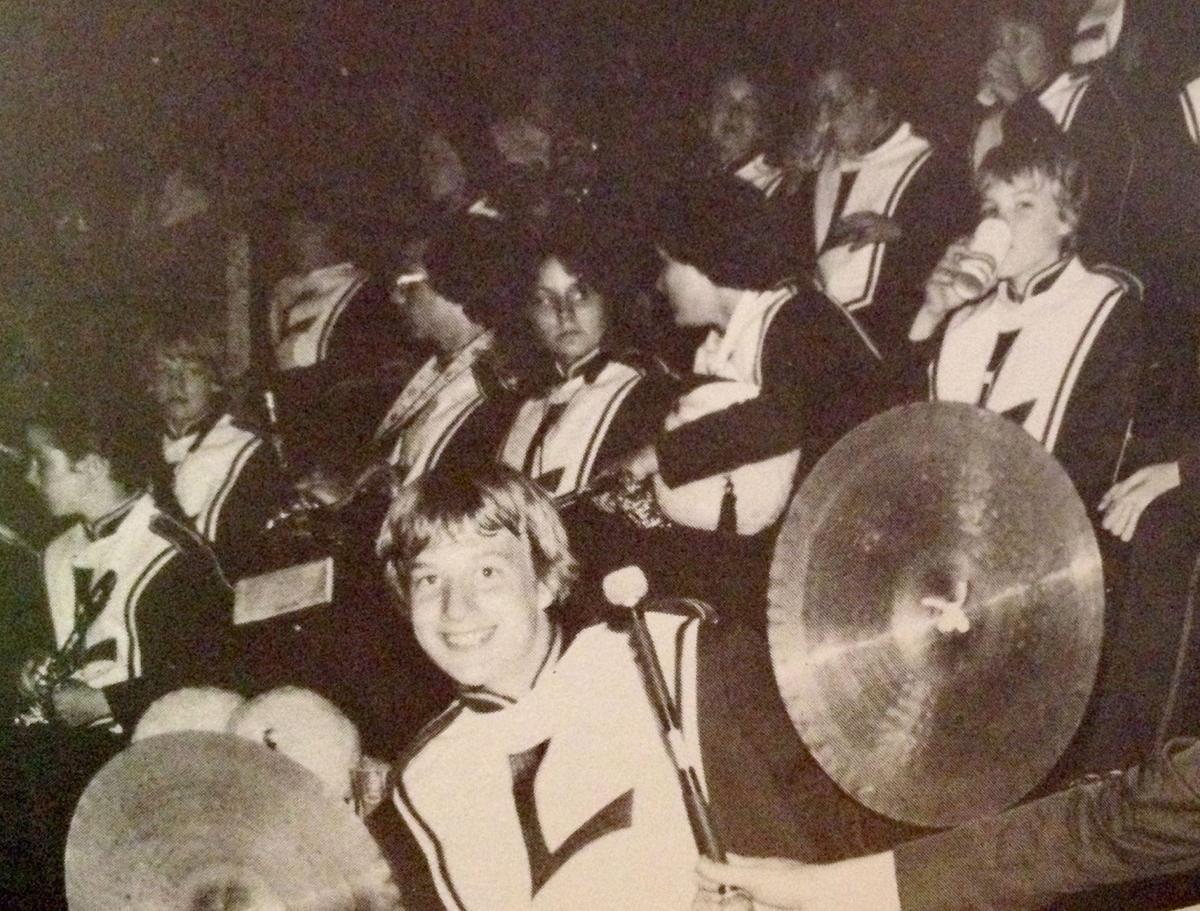 The 1981 LAHS marching band waits for their next number. 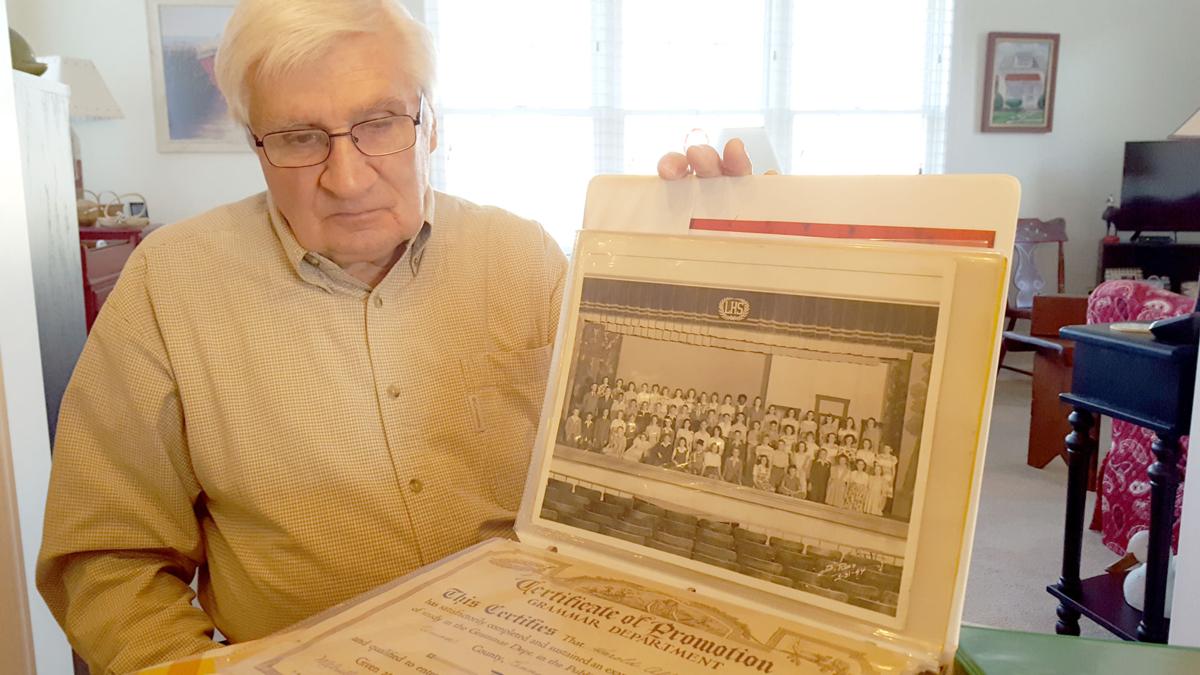 Harold Walters, Class of 1948, has a binder filled with photos and more from his time at Lewisburg High.

Students eat lunch in front of the LAHS building in 2016.

Nathan Wright plays his saxaphone along with the rest of the Green Dragon Marching Band in 2014.

The 2014 LAHS cheer squad cheers on the boys basketball team.

The 1981 LAHS marching band waits for their next number.

Harold Walters, Class of 1948, has a binder filled with photos and more from his time at Lewisburg High.

Teachers Joe Keller and Linda Dodd, aided by students, did what they could to save the school’s collection after Hurricane Agnes swamped the building in 1972. Costumes and props were destroyed. There was hope the sheet music could be saved.

“We took that music and hung it page by page,” said Keller, who taught biology 30 years at the school before retiring in 1990.

Keller, who helped launch the spring musical with Dodd, said the method worked as well as it could. “I had forgotten about that.”

As the high school nears the end of its time as part of the Lewisburg Area School District, the memories made inside the school on Market Street are coming back to life for many former students.

Lewisburg High closes with the final bell at school day’s end Tuesday after serving 88 years as a cornerstone in the Union County borough. A new school awaits in Kelly Township.

A ceremony at 7 o’clock that night in the auditorium will serve as a public goodbye with remembrances shared by alumni and teachers along with a special video presentation.

At 99 years old, Marion (Ranck) Rose is among the oldest living alumni of Lewisburg High. The retired Bucknell University administrator said she isn’t sad to see the school district transition to a new building. With a new building comes new technology and new perspectives, she said.

“I guess I thought it was about time,” Rose said.

Building contents destined for the freshly constructed high school, not two miles north will be relocated over an extended Thanksgiving break. Class resumes Dec. 5 inside the sprawling new school — the mark of a new beginning in light of a long ago beginning’s end.

The outgoing Lewisburg High School opened its doors in 1928 replacing the former West Ward school. Its debut was a classroom-only affair, as construction continued on both the auditorium and gymnasium, which opened respectively in 1930 and 1931, according to a history at www.lahsalumni.com.

Plans for the gymnasium weren’t in the cards as far as tax dollars were concerned. Certain townspeople felt it a necessity, and the independent Lewisburg School Association was formed and raised the funds.

Rose’s 1934 graduating class was the first to attend all four years in the building. It was a time when students like her sewed portions of their own wardrobes. They walked to school, of course, and they walked often.

“It was four times a day,” Rose said, pointing out there was no cafeteria so students walked home to eat.

Harold Walters, 86, Class of 1948, attended the school as World War II played out. He recalled a celebration marking the war’s end in the borough’s streets. But he also thought back to Memorial Field behind the school. The field hosted athletics, practice and game, but during the war, it was the site of Victory Gardens.

“People who didn’t have their own gardens could go there,” Walters said.

Walking, too, stood out to Walters. That was how he got to prom: North Derr Drive (Route 15) to George Johnson’s shoe shine shop and then a local florist, both on Market Street.

“Then you’d walk to get your date,” Walters said, pointing out proms were held in the gymnasium back then. “We didn’t think nothing of it. We didn’t have cars.”

He would actually drive a date to prom later. That came after he graduated. It’d prove pivotal.

“Our first date was at the Lewisburg High School prom,” Walters said, gesturing toward his wife, the former Gloria Lyons, Class of 1955.

“Kids mostly had their dad’s cars but he had his own because he was older,” Gloria Walters said with a grin.

The original building is the centerpiece of what now stands at the intersection of Routes 15 and 45. Its look and internal layout changed time and again as additions were built.

Industrial arts and home economics were offered with the completion of the first addition in 1955. Six more classrooms were added four years later, according to the Lewisburg Area High School Alumni Association website. The gym was expanded in the 1970s, and at the turn of the century, the high school underwent a major renovation.

Borough Mayor Judy Wagner graduated Lewisburg High in 1960. She returned after earning a degree at Bucknell University and worked as a guidance counselor throughout the district for 38 years.

A pair of pranks came to Wagner’s mind. Dates were lost to time, and she kept at least one culprit’s name to herself even after all these years.

There was a springtime awards ceremony. It could’ve been baccalaureate. She’s not sure. What she is sure of is the dress, or lack thereof, of one attendee. As the ceremony went on, a young man adorning a ski cap and nothing else ran through the auditorium.

“The expressions on the faces were priceless,” Wagner said.

Priceless, too, was the sight of barn animals roaming the school’s courtyard one day.

“There were all these cows and things in the courtyard. They had to get the animals out. It was hysterical,” Wagner said.

Bob Brouse, 76, Class of 1958, is president of the Alumni Association. He’s referred to some as the “keeper of the yearbooks” on behalf of the group. He has a copy of the very first Oneida from 1926. He found it on eBay.

Thinking back to his own time in the school, he said he met his best friend as a middle schooler when the two got into a fistfight in what is now the high school’s east side parking lot.

He was on the first wrestling team his sophomore year and stayed on through graduation. He remembered cutting weight working out in the gym, or occasionally sneaking into the coach’s room for a steam with the shower’s water dialed up as hot as it would go.

Browse thought he had an in with an aunt, Jennie Erdley, who he said helped begin the school’s library. He was placed in her class one year and figured he’d coast. How wrong he was.

“Bobby, don’t you think just because I’m your aunt you’re gonna pass this course,” Brouse recalled his relation telling him. “I didn’t say a word.”

Certain decorum was expected during the school day, recalled Tamara Bernstein, Class of 2006. After 3 p.m., teachers eased up. Students texted, chewed gum and sprinted through hallways. These after-school hours were when non-traditional skills and interests were fostered, Bernstein said.

Classrooms, she said, became dressing rooms for musicals. Music echoed vacant hallways in preparation for a concert long after the school day was over. “Break a leg” and other well-wishes were scrawled on white boards.

Bernstein lauded her teachers. They lent support in the wake of her father’s death in 2004. They were there for students, too, when classmate Lauren Pacenta died the following year.

“The walls that have absorbed so much wisdom and education during the day would probably share the things that are not taught, so much as they are felt if these walls could talk,” Bernstein said.

Those walls will belong to someone else soon enough.

GreenSpace Properties has an agreement in place with Lewisburg Area School District to purchase the building for $726,000. A court date awaits Nov. 29 as a Union County judge must sign off on the deal.

The new owner announced plans to retrofit the building into a multi-use plaza blending residential living with initiatives like the Lewisburg Children’s Museum and an expansion of Bucknell University’s business incubator.

The building may no longer be a school but it appears to have a constructive future to serve the Lewisburg community. New faces will walk its halls. New memories will come of it.

“The building was just the structure to meet people inside. It was the people I remember,” Brouse said.