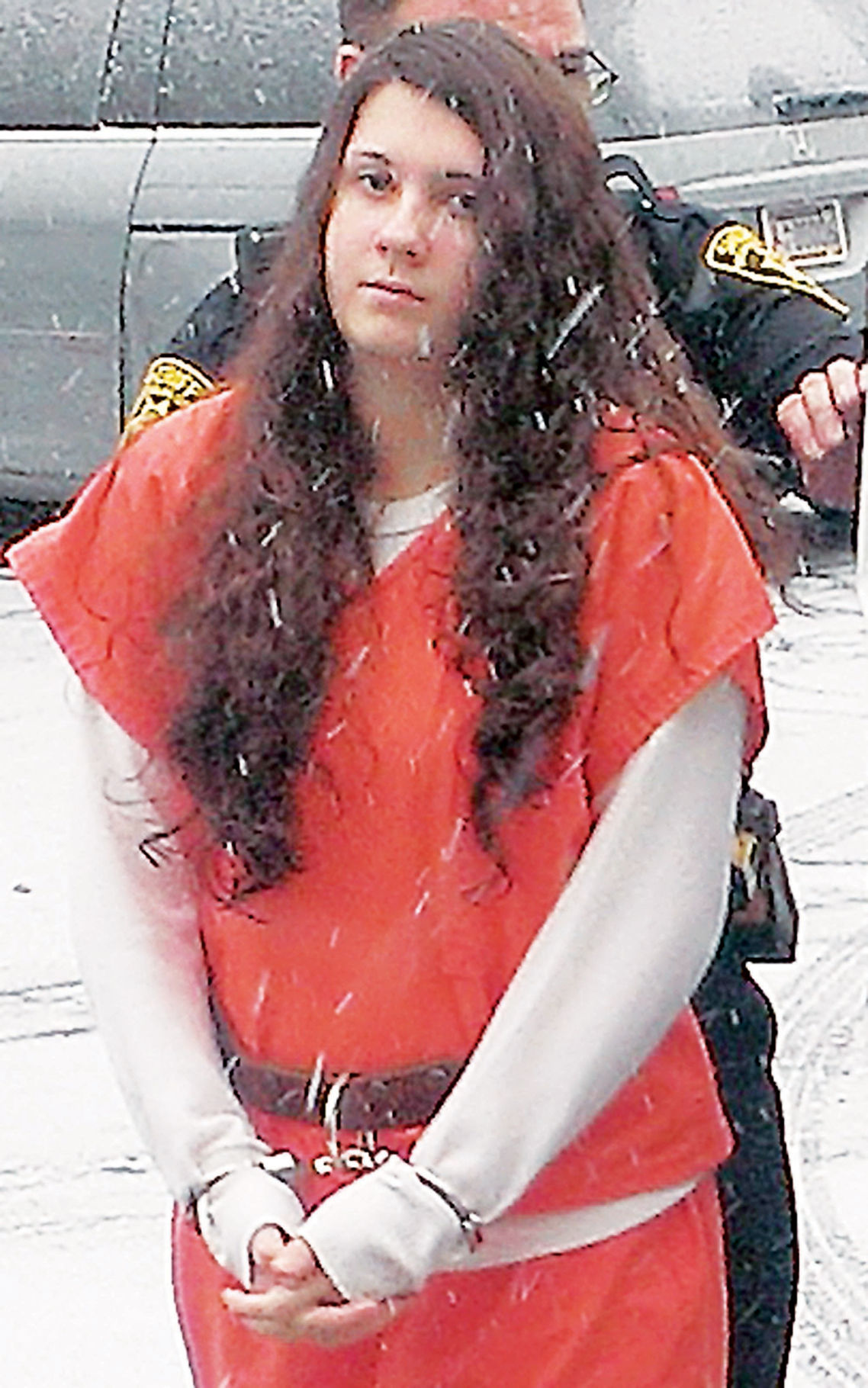 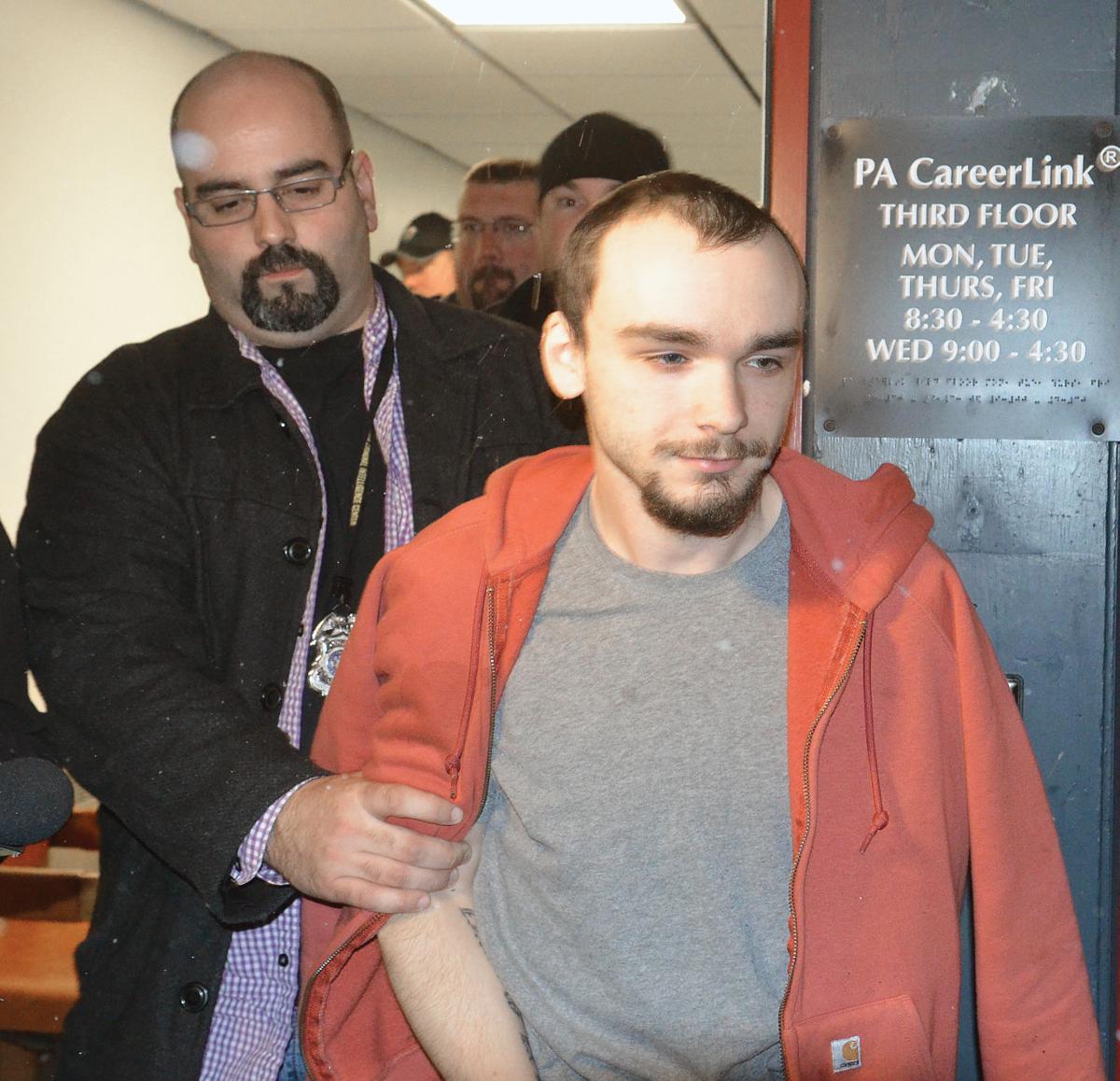 Elyette Barbour is escorted out of court on Friday night by Sunbury Police Officer Travis Bremigen.

Elyette Barbour is escorted out of court on Friday night by Sunbury Police Officer Travis Bremigen.

SUNBURY — Nineteen-year-old satanist Miranda Barbour admits to killing Troy LaFerrara of Port Trevorton. In a prison interview Friday night, she said that she considered sparing his life until he said the wrong thing. She also said LaFerrara was one of dozens of such victims she killed in the past six years.

Barbour, with her husband, Elytte Barbour, 22, of Selinsgrove, has been charged by Sunbury police in the Nov. 11 fatal knifing of LaFerrara. She requested an interview that was recorded by the Northumberland County Prison on Friday night.

While she offered scant details of her participation in slayings in Alaska, Texas, North Carolina and California, city police confirmed Saturday they had been working, prior to her revelations Friday night, with investigators from other states and the FBI about Miranda Barbour’s possible connection to other killings. The majority of her murders, she said, took place in Alaska.

City police on Saturday would not comment on the status of those investigations.

At 22 victims, "I stopped counting"

Asked Friday night how many people she had killed, Miranda Barbour said through a jailhouse phone: “When I hit 22, I stopped counting.”

She wants to plead guilty to LaFerrara’s murder, and said she is ready to speak with police about her other victims.

“I can pinpoint on a map where you can find them,” she said.

The 42-year-old Port Trevorton resident was killed on the Barbours’ three-week wedding anniversary.

“I remember everything,” Miranda Barbour said. “It is like watching a movie.”

She said she agreed to sex for $100 with LaFerrara, whom she met through a Craigslist ad. The two met in the parking lot of the Susquehanna Valley Mall in Hummels Wharf, and drove nearly six miles to Sunbury.

At one point, she planned to let LaFerrara out of her Honda CRV.

“He said the wrong things,” she said. “And then things got out of control. I can tell you he was not supposed to be stabbed. My husband was just supposed to strangle him.”

Time to "get it out"

According to court documents, Miranda Barbour knifed LaFerrara 20 times as Elytte Barbour sprang from the floor of the back seat to strap a cord around LaFerrara’s neck.

As she said upon her arrest, Miranda Barbour on Friday night repeated that LaFerrara tried to grope her, but she said it was his words that set her off.

“He told me that it was OK. If he would have said no, that he wasn’t going to go through with the  arrangement, I would have let him go.”

Miranda Barbour said she doesn’t care whether people believe her, that she wanted to tell her story to The Daily Item because she wanted to come clean and stop living a lie. She said she felt no remorse for her victims and said she killed only “bad people,” a belief she traced through a troubled childhood.

She said she was sexually molested at age 4 and was introduced to murder at 13, literally in the hands of a man who led her to satanism — beliefs that she said she held at the time of the LaFerrara homicide.

“I feel it is time to get all of this out,” she said. “I don’t care if people believe me. I just want to get it out.”

Miranda said when she was 4, she was sexually molested by a relative.

Elizabeth Dean, Miranda’s mother, confirmed Saturday that her sister’s husband was later arrested and charged with sexual abuse of a minor and sentenced to 14 years in prison.

“It was bad,” Dean said. “I never let (her) stay anywhere except for my sister’s house, and I was devastated when I found out.”

Nine years later, Miranda joined a satanic cult in Alaska. Soon after, Miranda said, she had her first experience in murder.

Barbour said she went with the leader of the satanic cult to meet a man who owed the cult leader money.

“Then he said to me that it was my turn to shoot him. I hate guns. I don’t use guns. I couldn’t do it, so he came behind me and he took his hands and put them on top of mine and we pulled the trigger. And then from there I just continued to kill.”

While in the satanic cult, Miranda became pregnant. The cult did not want her to have the baby, so, she said, members tied her to a bed, gave her drugs and she had an “in-house abortion.”

However, her mother on Saturday said that when Miranda told her about the abortion, she took her daughter to a doctor who said there were no signs of an ended pregnancy.

Miranda said she spent the next three years in Alaska, continuing in the satanic cult and participating in several murders.

“I wasn’t always there (mentally),” she said, adding that she had begun to use drugs. “I knew something was bad inside me and the satanic beliefs brought it out. I embraced it.”

During those three years, Miranda said she became pregnant again.

“And I moved to North Carolina,” she said. “I wanted to start over and forget everything I did.”

She left Alaska as a high-ranking official in the satanic world, leaving the father of her second pregnancy, a man named Forest, the No. 2 leader in their cult, who was murdered.

Ready to talk to police

Although Miranda would not say who else may have been involved in the alleged murders, she said all police have to do is talk to her because she is ready to speak.

“I would lure these people in,” she said. “I studied them. I learned them and even became their friend. I did this to people who did bad things and didn’t deserve to be here anymore.”

Sunbury police Chief Steve Mazzeo said authorities are aware of Miranda’s claims of murders, are taking them very seriously, and are also aware of Friday night’s interview. Prison officials have been cooperating with his department, Mazzeo said.

“We are reviewing the recording of The Daily Item interview and I will not confirm or deny anything at this point,” he said.

“I will however say that through investigations by lead officer Travis Bremigen he has been in contact with several other states and is working with law enforcement from various cities and towns.

During the interview, Miranda was asked that, given her small stature, how people would believe she would be capable of murder.

Asked why she pleaded not guilty to the LaFerrara murder, she simply said: “I didn’t want to.”

“When I was at my arraignment and the judge asked me how do I plead, I was ready to say guilty and my attorney (chief public defender Ed Greco) grabbed the microphone and said not guilty.”

Miranda Barbour said she has not spoken with her husband since the day she was arrested, but saw The Daily Item photo of Elytte Barbour’s new teardrop tattoo that he displayed at his most recent court appearance.

Husband "proud of what he did"

Elytte Barbour is being held in Columbia County Jail.

Miranda said she has no regrets for any of her alleged crimes.

“I know I will never see my husband again and I have accepted that. I know I wanted to talk about all this because I know I had a 20-year window where I would possibly get out of jail and I don’t want that to happen. If I were to be released, I would do this again.

“By no means is this a way to glorify it or get attention. I’m telling you because it is time for me to be honest and I feel I need to be honest.”

Timeline of the Barbour Murder case