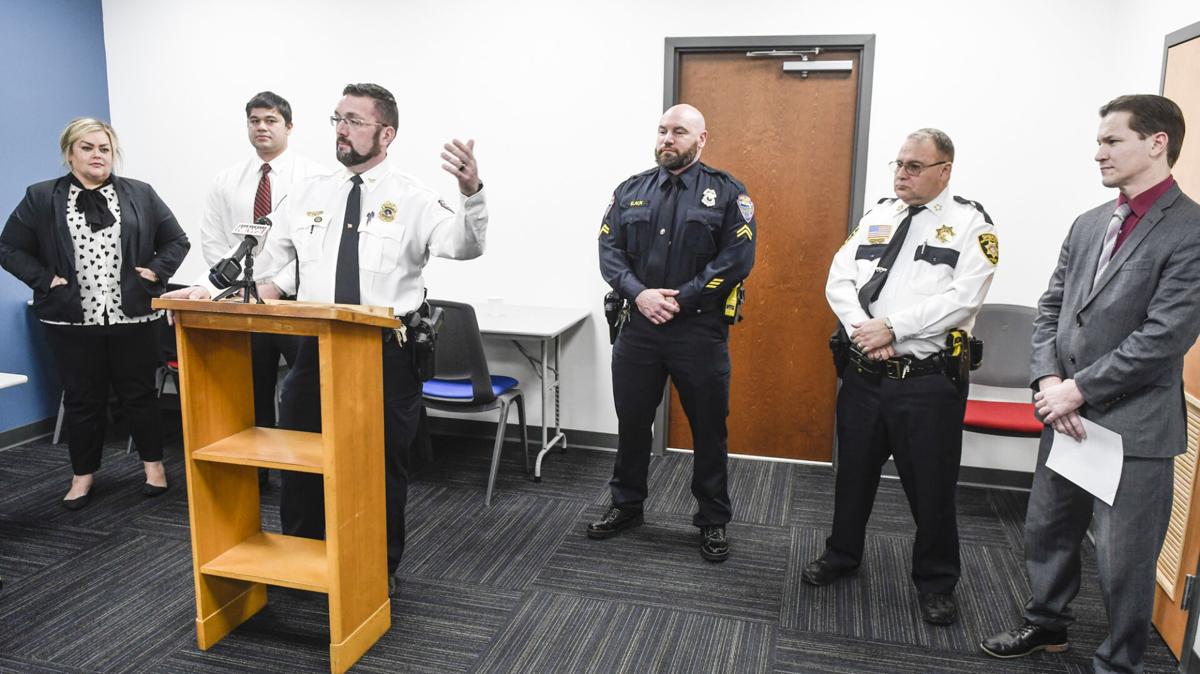 Robert Inglis/The Daily Item Sunbury Police Chief Brad Hare speaks at the podium during a press conference on Thursday along with Assistant District Attorney Julia Skinner, left, Sunbury Mayor Josh Brosious, Officer Brad Slack, Sheriff Robert Wolfe and Northumberland County District Attorney Tony Matulewicz, regarding the recent uptick in violent crime in the city and efforrts that the department has been making to deal with it. 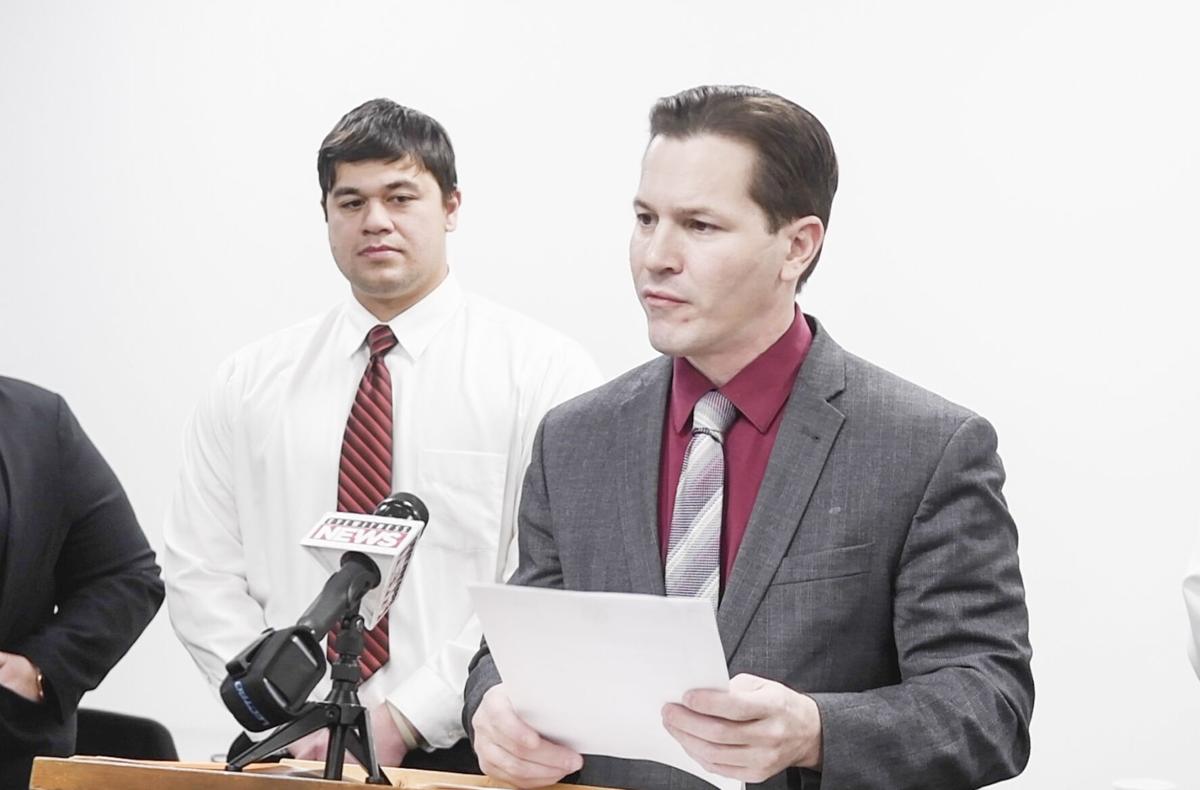 Northumberland County District Attorney Tony Matulewicz talks during a press conference on Thursday regarding the increase in violent crime in the city of Sunbury as Sunbury Mayor Josh Brosious looks on.

Robert Inglis/The Daily Item Sunbury Police Chief Brad Hare speaks at the podium during a press conference on Thursday along with Assistant District Attorney Julia Skinner, left, Sunbury Mayor Josh Brosious, Officer Brad Slack, Sheriff Robert Wolfe and Northumberland County District Attorney Tony Matulewicz, regarding the recent uptick in violent crime in the city and efforrts that the department has been making to deal with it.

Northumberland County District Attorney Tony Matulewicz talks during a press conference on Thursday regarding the increase in violent crime in the city of Sunbury as Sunbury Mayor Josh Brosious looks on.

SUNBURY — Nine people are either in custody or wanted by police for various crimes committed in the city dating back to late 2020, according to Sunbury Police Chief Brad Hare.

Hare, along with Sgt. Travis Bremigen, Cpl. Brad Slack, Northumberland County District Attorney Tony Matulewicz, Assistant District Attorney Julia Skinner, Sunbury Mayor Josh Brosious, and Sheriff Bob Wolfe held a press conference at the new Sunbury Police station on Arch Street, where the group said they had been working together for more than a year on incidents and investigations leading to the arrests and arrest warrants on the individuals.

“We hear the public’s call for action,” Hare said. “We hear our residents are frustrated and we agree with them. So are we.”

Hare said his department has been working nonstop investigating crimes and they take time.

“We are telling you all today that we will be getting all of these suspects in custody,” he said. “We have had help from all agencies and the district attorney’s office and we are not stopping until everyone is in custody.”

“There are boots on the ground and everyone is working to the bone,” he said. “We want to thank the Sunbury Police Department for all they are doing and we are here to prosecute all of these individuals.”

Matulewicz said the crimes occurring are a top priority because of their severity.

“All of what has been going on recently in Sunbury is violent,” he said. “These are violent crimes and they will be prosecuted.”

Brosious said he and the council are not playing around.

“Enough is enough,” he said. “Council and I have told police to do what they need to do to get this all under control.”

Hare announced a list of crimes and said charges on all the suspects have been filed at Sunbury District Judge Mike Toomey’s office. Toomey has issued arrest warrants for all individuals associated with the alleged crimes.

Stanley Marshall, 33, of Philadelphia, is wanted for felony robbery in an incident that police said saw Marshall display a handgun in the 100 block of N. 12th St., in early 2021.

Farrington Fitch, 42, homeless, is wanted for aggravated assault and theft after police said he was involved in a robbery in which a knife was displayed in a robbery of an alleged victim who was giving the man a ride to the 400 block of Race Street on Nov. 10, 2021.

Police said Fitch asked the man for a ride and when they arrived at the location, Fitch pulled out a knife and stole about $500 and a cellphone before leaving the scene.

Luis Alamo Rosa, 26, of Chestnut Steet, in Mifflinburg, was taken into custody Thursday for felony aggravated assault for an alleged shooting incident that took place at a home in the 500 block of N. 6th Street, on Oct. 17, 2021.

Police say they received information recently that Rosa, who goes by the nickname “Ghost,” was involved in an incident days prior to the shooting. When Rosa saw some of the people allegedly involved in the incident, he retrieved a handgun and ran down an alley where, a confidential informant told police, gunshots were heard and Rosa was seen running down an alley before jumping into a truck and leaving the scene, according to police.

Rosa was arraigned before Toomey Thursday afternoon and sent to Northumberland County Jail in lieu of $200,000 cash bail.

Ajani Munsch-Ousha Uhuru, 23, of Fairmount Avenue, is wanted for receiving stolen property and possession of a controlled substance stemming from an incident on Jan. 5 involving a search warrant being served for a shooting incident. Police said they served the warrant and discovered drugs inside the home.

Kendall Dennison, 29, of N. 5th St., in Sunbury, was sent to Northumberland County Jail after appearing before Toomey last week. Police charged him with felony possession with intent to deliver a controlled substance. Police said they discovered marijuana from inside a vehicle Dennison owned during a search on Jan. 3.

Elijah Simpson, 17, who is listed with a last known address in the 600 block of Catawissa Avenue, is wanted by police after officers said he committed felony robbery when he allegedly pulled a handgun on a man on Shroyer Avenue and robbed him of $40 and a cellphone.

Hakeem Jefferson, 28, of Rural Avenue, Williamsport, is wanted on charges of felony person not to possess a firearm after police said they discovered a handgun in a vehicle discovered at the scene of a Jan, 3 shooting that saw two people taken to the hospital following a shots-fired investigation in the 4300 block of Packer Street.

Yusuf McLaurin, 23 of Fairmount Avenue, was charged on Jan. 4 after police say he shot two men who both went to the hospital. McLaurin was arraigned by Toomey and sent to jail in lieu of $250,000 cash bail.

The victims, Felix Pena and Tyrone Short, went to Geisinger Medical Center in Danville following the Jan. 3 incident. Pena and Short are both recovering from their injuries, police said.

The incident began when police were dispatched to the area near the Strike Zone Bowling Alley for reports of shots fired.

Hare and Bremigen said they are continuing an investigation into two more shootings.

The first occurred on Dec. 3 in the 100 block of N. 5th Street where several shots were fired at three people but nobody was struck, police said.

The second is a Jan. 7 shooting that saw shots fired into a home on Bainbridge Street. Police said no one was injured in the shooting.

Anyone with information on any of these or other crimes in the city is asked to call Northumberland County 911, Hare said.