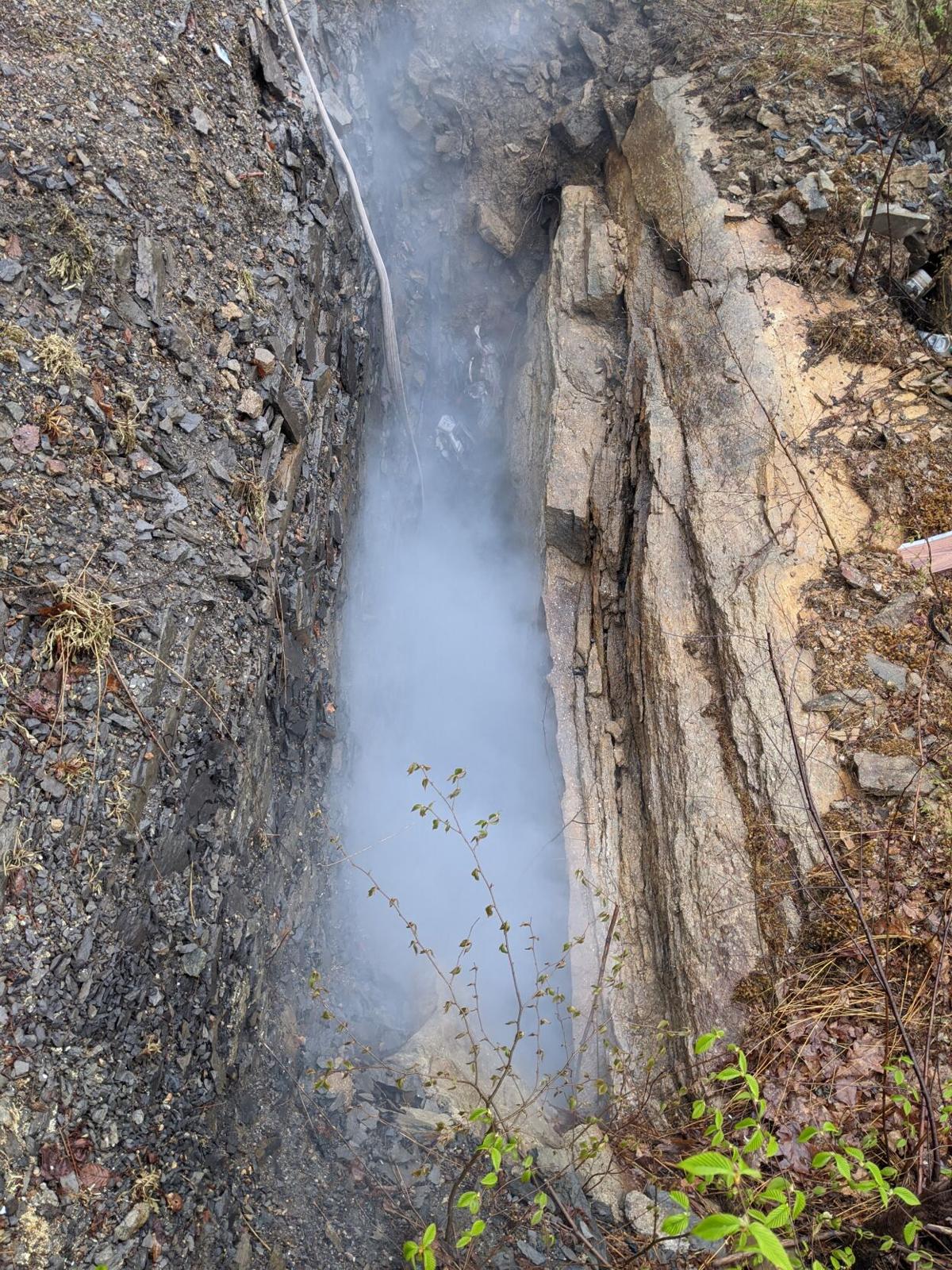 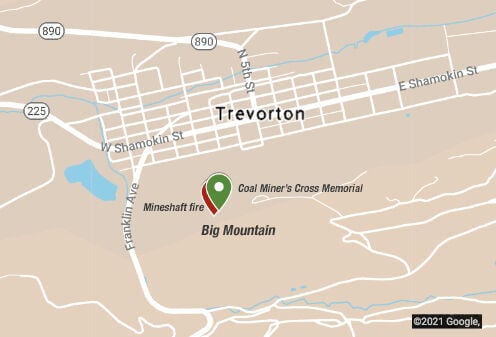 This map indicates where the abandoned mineshaft fire (left, red pin) is in comparison to Trevorton and the Coal Miner’s Cross Memorial (right, green pin).

This map indicates where the abandoned mineshaft fire (left, red pin) is in comparison to Trevorton and the Coal Miner’s Cross Memorial (right, green pin).

The Pennsylvania Department of Environmental Protection remains optimistic that the continued mass dumping of water down a mine slope near Trevorton is working to extinguish an underground fire.

More than 670,000 gallons of water have been dumped into the slope since Saturday, according to Megan Lehman, environmental community relations specialist, Williamsport.

Since the volume of smoke decreased and the fire’s scent weakened, she said DEP believes the water soak is working. DEP is putting on hold potential plans to take a more technical and costly approach such as using firefighting foam or inert gas to smother the fire.

“Initial plans were focused on the potential for a raging underground tire fire and/or mine fire. Those worst-case conditions have, thankfully, not materialized at this time,” Lehman said.

The fire was first reported on April 24 atop Big Mountain, immediately south of Trevorton and just steps away from the Coal Miner’s Cross Memorial visible from the town below. The parcel of land is owned by Northumberland County, leased by the Anthracite Outdoor Adventure Area, and isn’t currently permitted for mining.

DEP and first responders theorized potentially thousands of used tires and other waste discarded illegally into the mine opening caught fire and also presumed coal caught fire hundreds of feet below the surface.

DEP’s Bureau of Abandoned Mine Reclamation (BAMR) recommends continuing with the high volume water application, which was taken over by third-party contractor Tri-County Spreading of Paxinos. The company relieved the Trevorton Fire Company. It is using five tanker trucks to deliver water to the site — larger equipment that fills and releases more quickly than the fire company’s single tanker.

An independent research group on Tuesday lowered camera equipment with LED lights, a temperature probe and depth gauge into the mine slope opening atop Big Mountain immediately south of Trevorton. The equipment reached depths of 250 feet and encountered significant amounts of household trash and few tires.

DEP analyzed the resulting data including still images and video footage. Smoke and water vapor clouded the images but no flames or smoldering debris was observed, according to Lehman.

Dr. Benjamin Bishop and Dr. Robert Spalletta, professors with the University of Scranton, along with the university’s laboratory equipment manager, Majid Mokhtari, worked to capture the images and collect data. Bishop said they’re three members of a much larger team involved in the research group which includes representatives of Penn State University and private industry.

The group is researching the use of subterranean robotics. It’s applied locally by adapting the technology to explore anthracite mine fires. They’ve previously collected data and images in Centralia, home to the famously raging underground fire about 19 miles east of Trevorton.

Bishop on Thursday explained that the researchers lowered two different systems into the mine slope. It’s not set to provide live images; rather, it collects images and data which is retrieved from the equipment after it’s pulled back to the surface.

“You’re at like a 60-degree slope. We had to build a sheet-metal sled to get over obstructions,” Bishop said. “There was quite a bit of trash.”

The sled became hung up a few different times on a rock ledge and the trash. The debris prevented the sled from moving beyond 250 feet, he said.

“The conditions were very challenging in there,” Bishop said. “I’d say visibility was maybe a foot to 2 feet.”

A mining expert with BAMR previously cited mining maps and geological information when explaining that the coal seam accessed by the mine slope runs east to west between the Trevorton area and East Cameron Township — saying the fire wouldn’t likely spread below Trevorton and that the village is geographically protected.

“If the fire is not ultimately extinguished through the efforts described above, alternate solutions will be pursued and can be employed quickly under the emergency procurement process,” she said.

DEP would reclaim the mine should the process of extinguishing the fire not seal or backfill the mine, Lehman said.