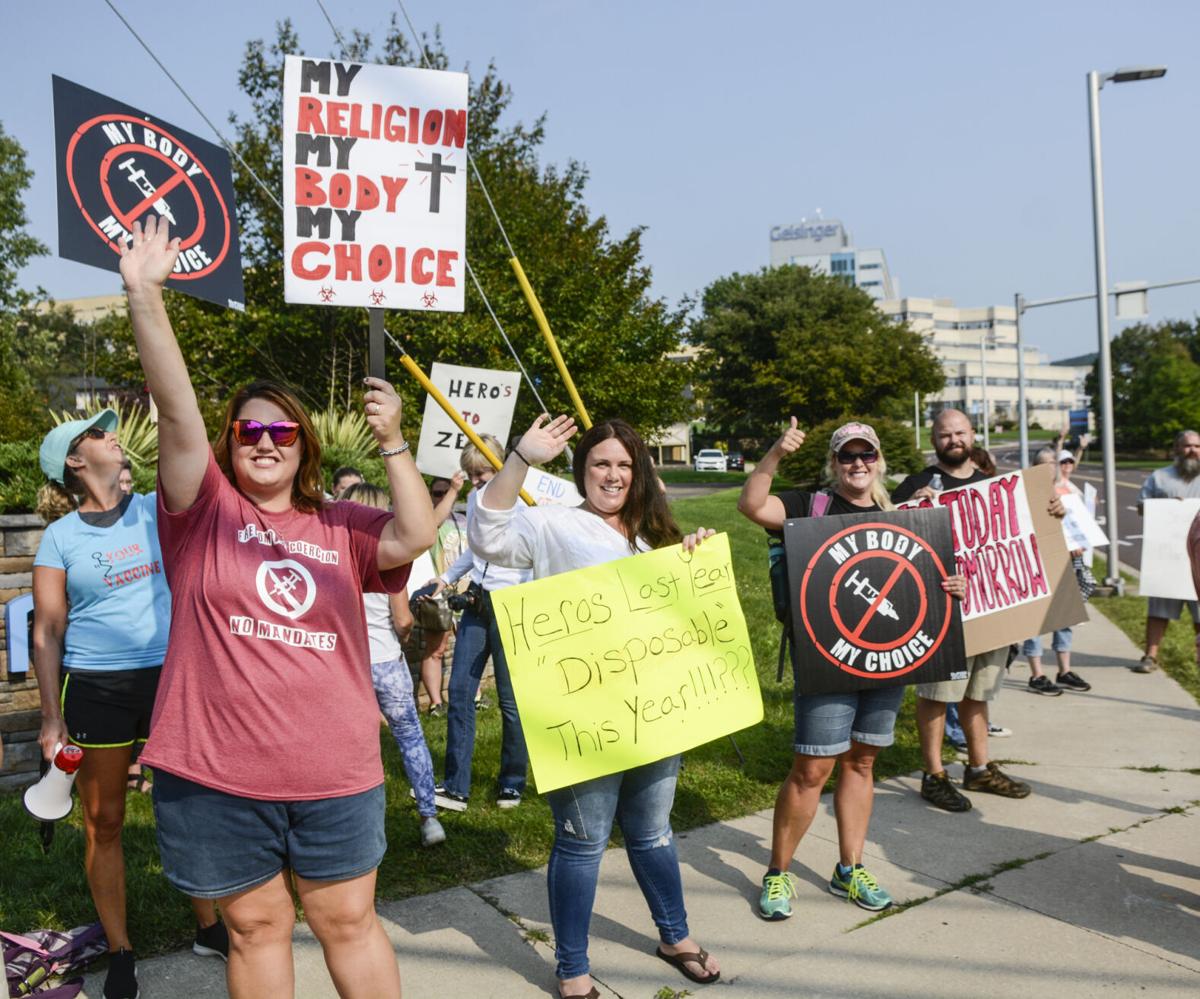 Protestors stand at the N. Academy Avenue intersection near Geisinger on Tuesday in order to protest mandatory mask and vaccine orders. 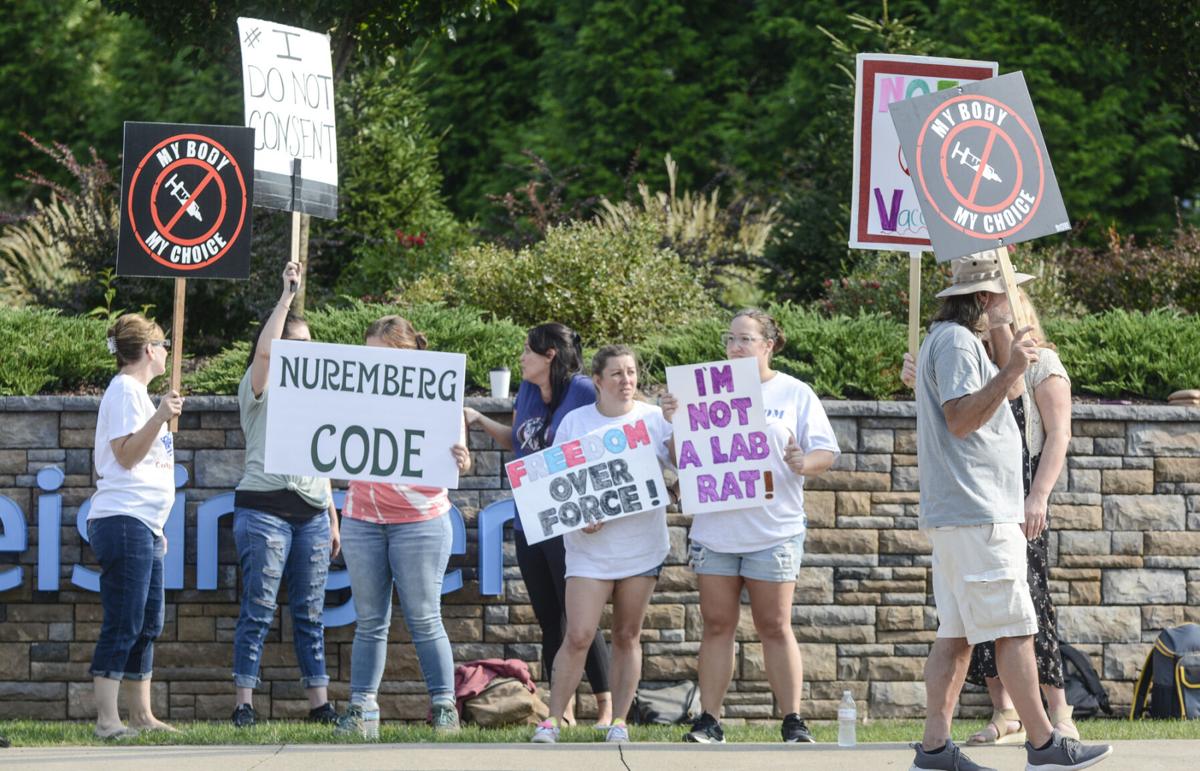 Protestors stand out in front of Geisinger on Tuesday morning as they shouted out against the mandatory mask and vaccine orders. 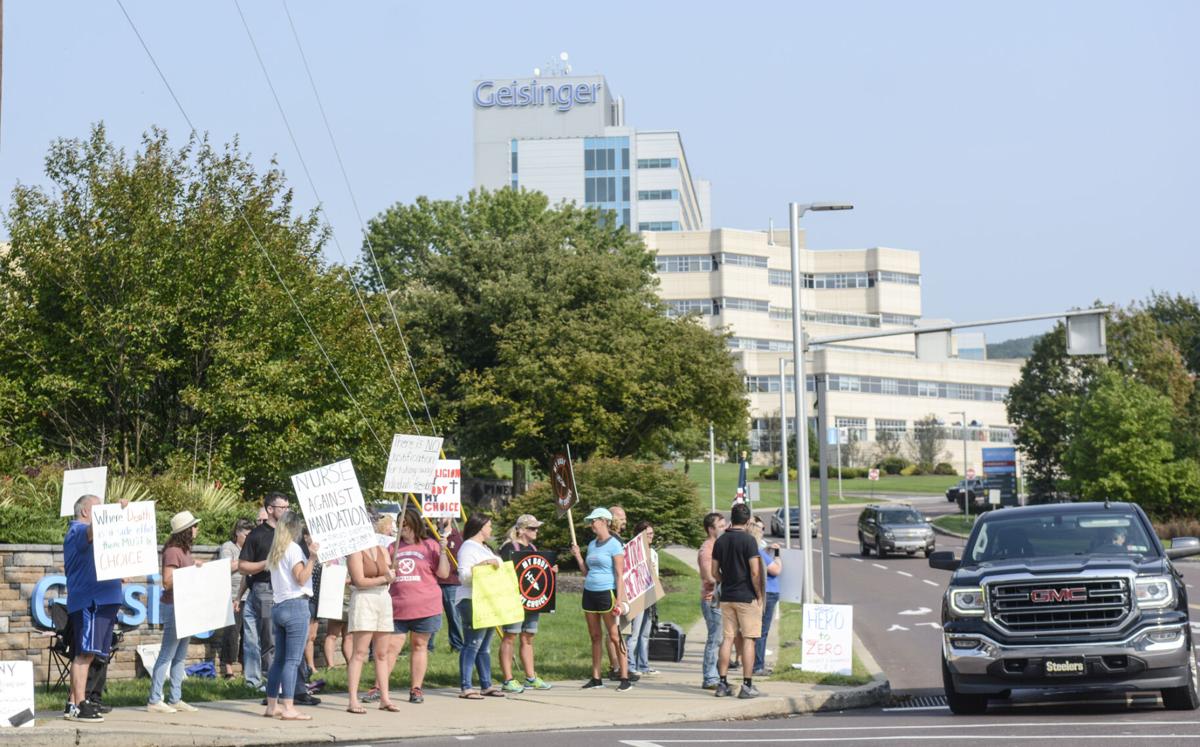 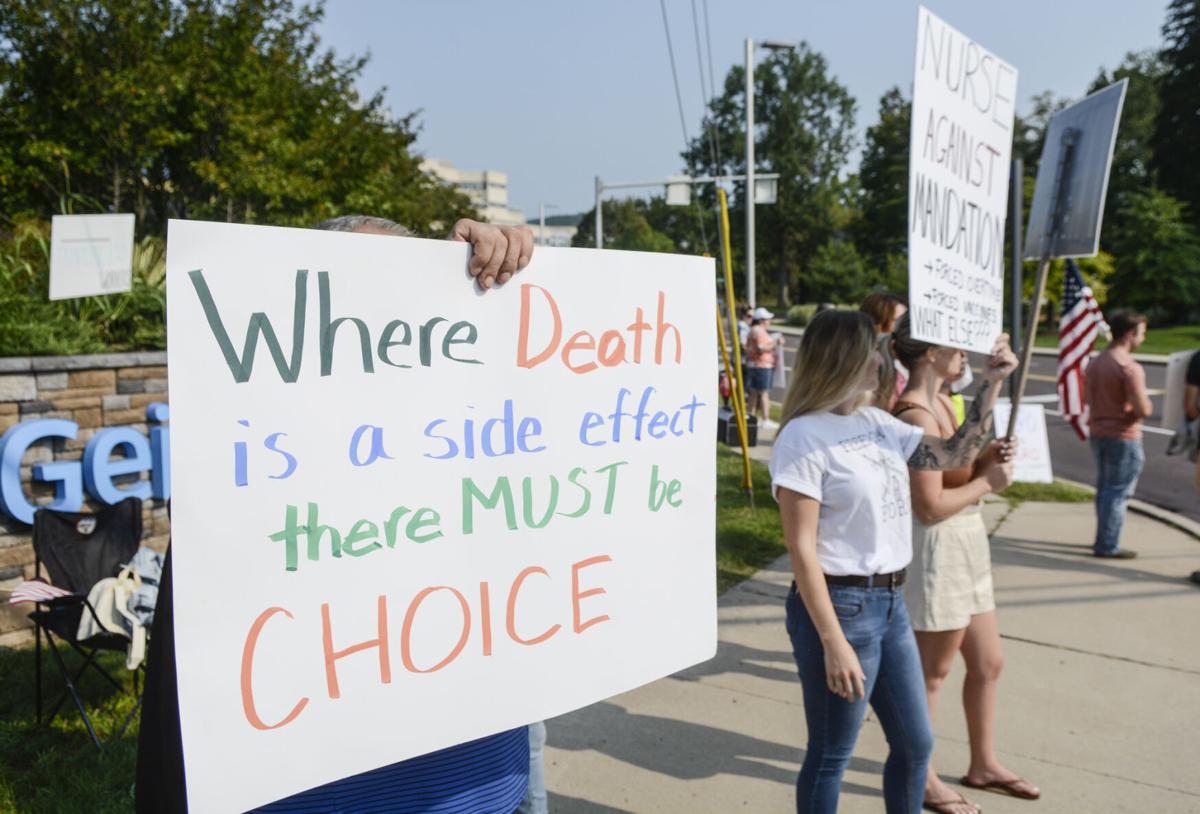 Protestors held up a variety of signs with different sayings on Tuesday at the entrance to Geisinger in Danville to protest the mandatory mask and vaccine orders. 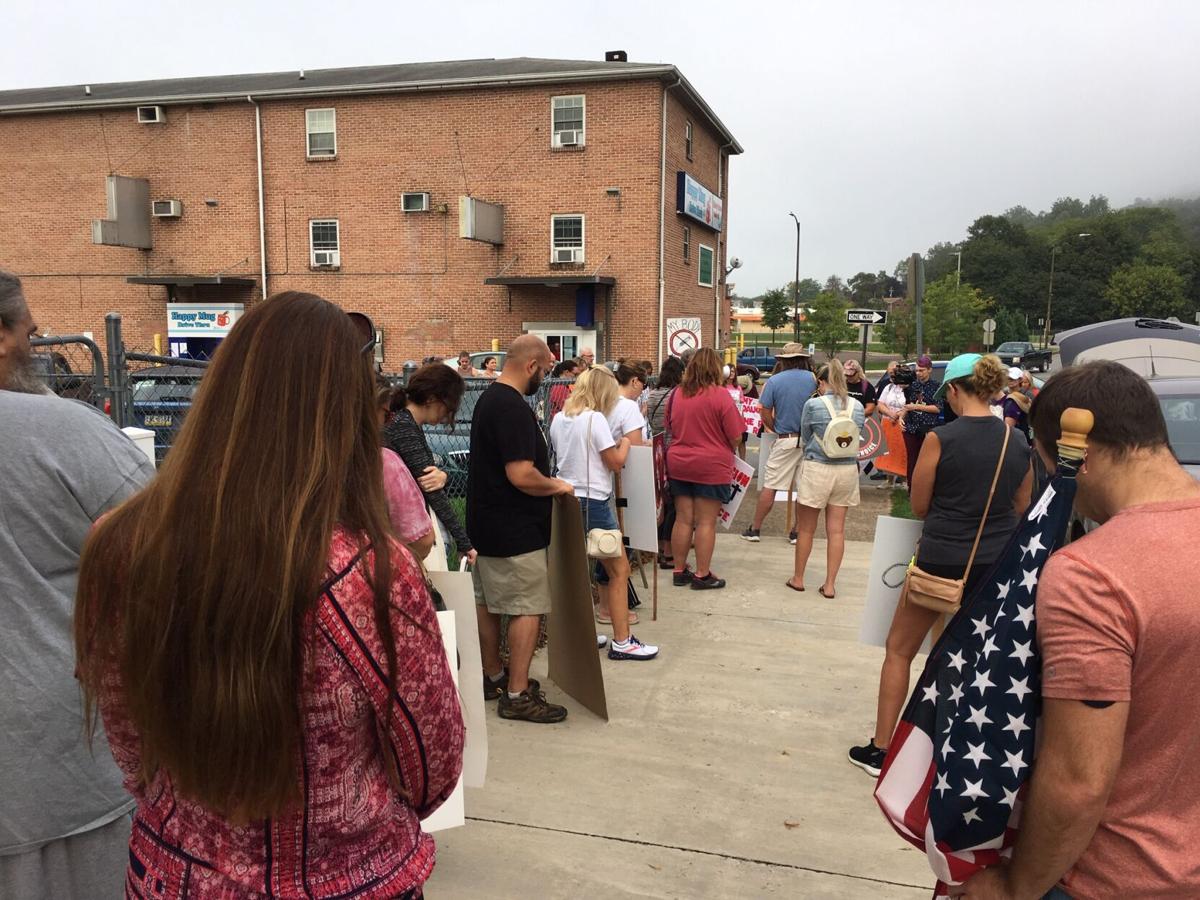 Protesters listen to prayer before marching Tuesday in protest of Geisinger’s vaccine mandate. 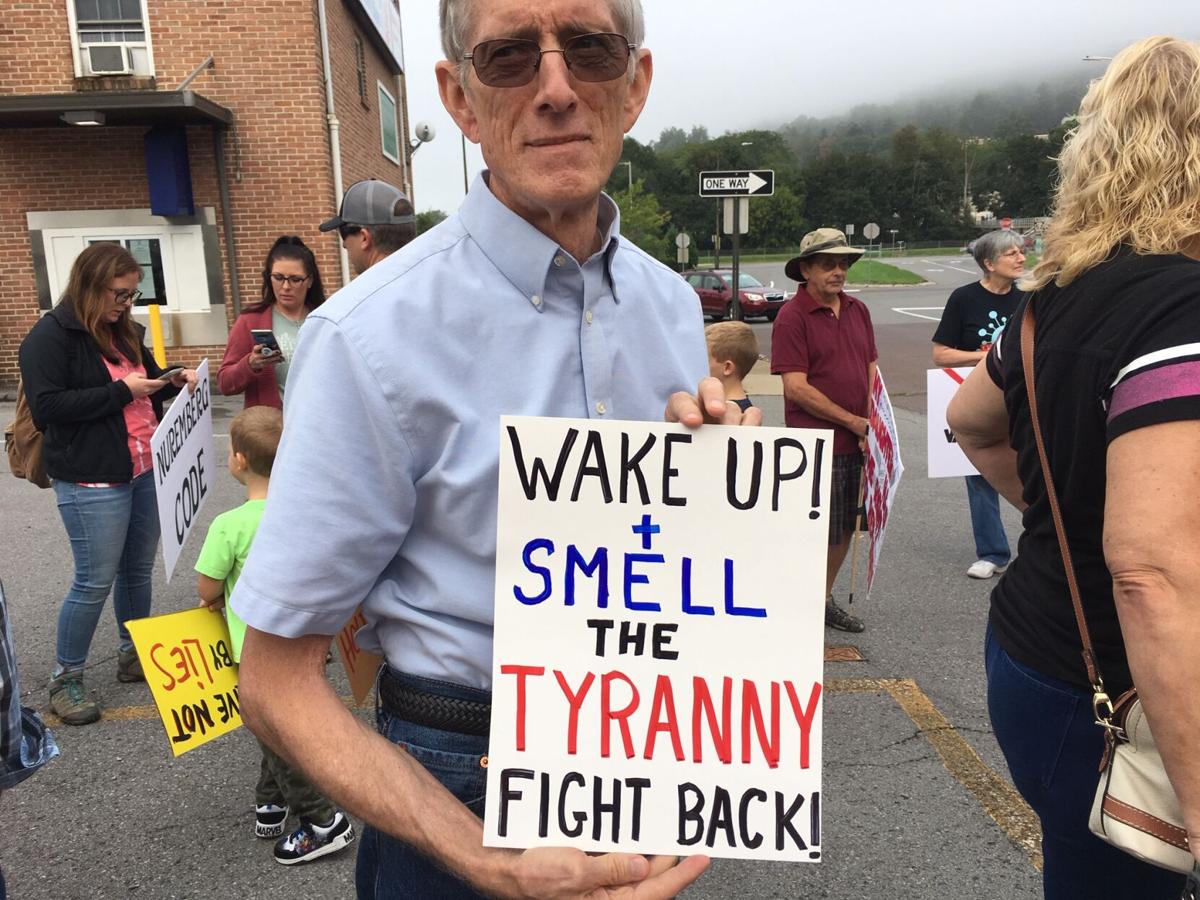 Gary Krum, of Catawissa, who is not a Geisinger employee, shows his sign for the protest against Geisinger’s vaccine mandate.

Protestors stand at the N. Academy Avenue intersection near Geisinger on Tuesday in order to protest mandatory mask and vaccine orders.

Protestors stand out in front of Geisinger on Tuesday morning as they shouted out against the mandatory mask and vaccine orders.

Protestors held up a variety of signs with different sayings on Tuesday at the entrance to Geisinger in Danville to protest the mandatory mask and vaccine orders.

Protesters listen to prayer before marching Tuesday in protest of Geisinger’s vaccine mandate.

Gary Krum, of Catawissa, who is not a Geisinger employee, shows his sign for the protest against Geisinger’s vaccine mandate.

DANVILLE — Gary Krum believes researchers are lying to us and doctors are getting the COVID vaccine so they won’t be fired.

Krum, 70, of Catawissa, was among about 70 protesters — a mix of Geisinger employees and those not employed there — who marched from Spruce Street in Danville to the entrance road at Bloom Road and Academy Avenue on Tuesday. They picketed most of the day at the intersection to protest Geisinger’s mandate that all employees get vaccinated against COVID, unless they had valid medical or religious reasons for an exemption.

Geisinger announced on Aug. 25 that all of its employees must be vaccinated against COVID-19 by Oct. 15 or they could be terminated. That was recently pushed back to Nov. 1, but those who are vaccinated still will receive a $500 bonus, spokesman Joseph Stender said. Evangelical Community Hospital, Lewisburg, is not mandating vaccines. Unvaccinated employees there must undergo daily testing beginning Oct. 4. Those who refuse the tests also risk termination.

Geisinger estimates 70 percent of its workforce is fully vaccinated. At Evangelical, that figure is 63 percent.

In response to the protest, Megan Brosious, chief administrative officer for Geisinger’s central region, said in a statement, “We support our employees and respect their right to voice their opinions. As we face another surge in COVID-19 infections and hospitalizations, the science is clear that the vaccine is our best hope to stop the spread of COVID-19 and prevent more dangerous and contagious variants from taking hold in our communities.”

Brosious said exemptions are available for those “who have a documented and very specific medical reason or sincerely held religious belief that precludes them from receiving the COVID-19 vaccine.”

Peaceful marchA group called “We the People” circulated fliers to organize the protest in response to the mandate, which comes as cases of the delta variant are on the rise. Word of the protest led Danville and Mahoning Township police to show to ensure the protesters stayed safe — and also didn’t park in the Weis parking lot, which is private property, across Spruce Street from where the group first gathered, Police Chief Jonathan Swank said.

Borough police cruisers rode beside the group early in the walk and blocked the intersection of Ferry and Center streets briefly to allow the marchers to cross. Swank said police suggested the group walk to Bloom Street and walk the sidewalks on the way to the Geisinger entrance road.

The protesters stood along both corners of North Academy Avenue at the Bloom Road intersection in the township, holding signs with messages such as, “LOVE YOUR NEIGHBOR, RESIST TYRANTS,” “There is NO justification for taking aways individuals’ freedom,” “Heros (sic) Last Year ‘Disposable’ This Year!!!???” and “NURSE AGAINST MANDATION (sic) -FORCED OVERTIME -FORCED VACCINES WHAT ELSE???” Motorists driving by occasionally honked in support of the protesters.

Krum, who is not a Geisinger employee, held a sign that read, “WAKE UP! + SMELL THE TYRANNY FIGHT BACK!” He said he opposed the mandated vaccines “because I believe we the people have freedom to make decisions for ourselves.”

He said vaccines should not be mandated. He said researchers know better about the vaccine but lie to the people. He said Geisinger doctors get the shot because they don’t want to lose their jobs.

He also claimed most of the people who contracted the delta variant of COVID-19 were vaccinated. When challenged on that statement and asked why media nationwide report otherwise, he claimed the government owns the media, “the same as in Germany with Hitler.”

Dr. Rochelle Walensky, director of the Centers for Disease Control and Prevention (CDC), has said 99.5 percent of all deaths from COVID-19 are among the unvaccinated. State health officials said on Tuesday that Pennsylvania residents who are unvaccinated against the coronavirus were far more likely to contract COVID-19, become hospitalized and die than those who got the shot.

More than 35,000 people who were fully vaccinated have tested positive for the virus since January, representing only 6 percent of all cases statewide, according to the data released Tuesday.

New vaccine deadlineBill Huntington, of Bloomsburg, who also said he doesn’t work for Geisinger, gave a pep talk through a bullhorn before the protesters started their walk. He emphasized the protest would be a peaceful protest, despite those who might badger or harass them, as, he said, someone in an SUV had done before they started out.

He said Geisinger knows the mandate is not OK with those who do not want the shot.

“They’re hurting people immensely, physically, emotionally,” Huntington said. “Let’s just pray that cool heads prevail, that those on top of Geisinger realize what they are doing to their employees and their community, and let’s have a peaceful protest.”

Vanessa Williams, 28, of Nescopeck, and Aubree Conklin, 35, of Berwick, work in a Geisinger outpatient clinic but refuse to get the shot.

Williams said no one knows the long-term effects of the vaccine.

Asked by a reporter if they were concerned about bringing the virus home to their families, they said they would build up immunity.

Conklin said, “My whole family had COVID,” she said. “It’s all fine.”

Another woman, who would not give her name, also was wary of the vaccine, though she said, without explanation, that the vaccine sheds onto other people. She repeated the false claim that the flu kills more people.

Geisinger said it pushed the vaccine deadline back to Nov. 1 because the health system expects increased demand for shots due to new information about a potential booster shot approval and the recently announced federal vaccine requirements.

“Given this new information, we expect continued employee demand and a new surge of community demand to occur simultaneously over the next several weeks,” a Geisinger statement read.

While cases of COVID-19 in Montour, Northumberland, Snyder and Union counties measured in the single digits daily for most of the summer, new cases steadily increased beyond the teens and 20s.