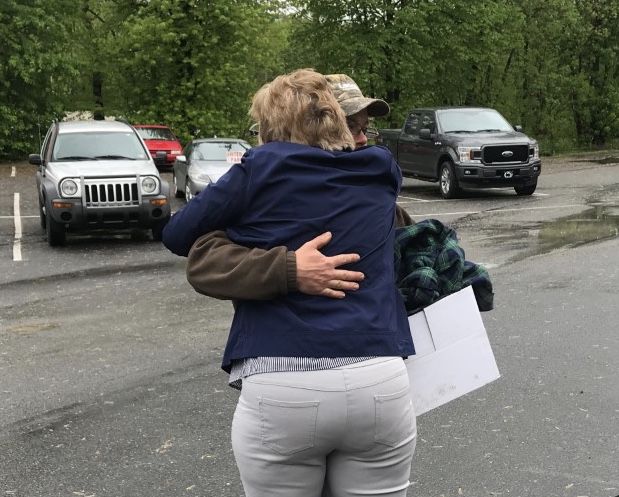 Tammy Heeter and Todd Foreman hug in the parking lot of Wood-Mode after employees were told the cabinet manufacturer was closing permanently on Monday. 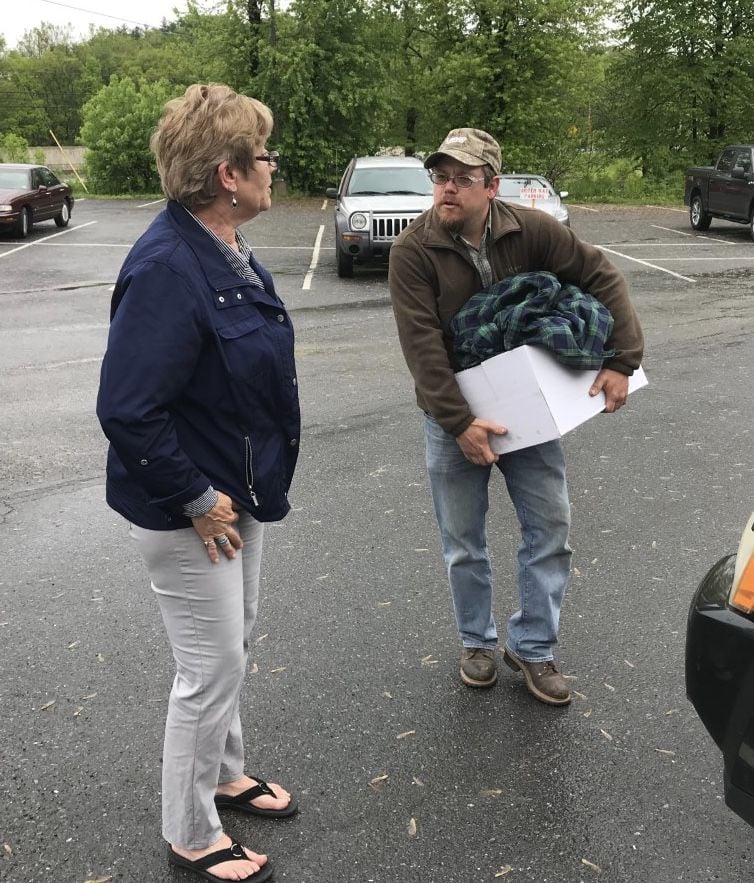 Tammy Heeter and Todd Foreman talk in parking lot of Wood-Mode after employees were told the cabinet manufacturer was closing permanently on Monday. 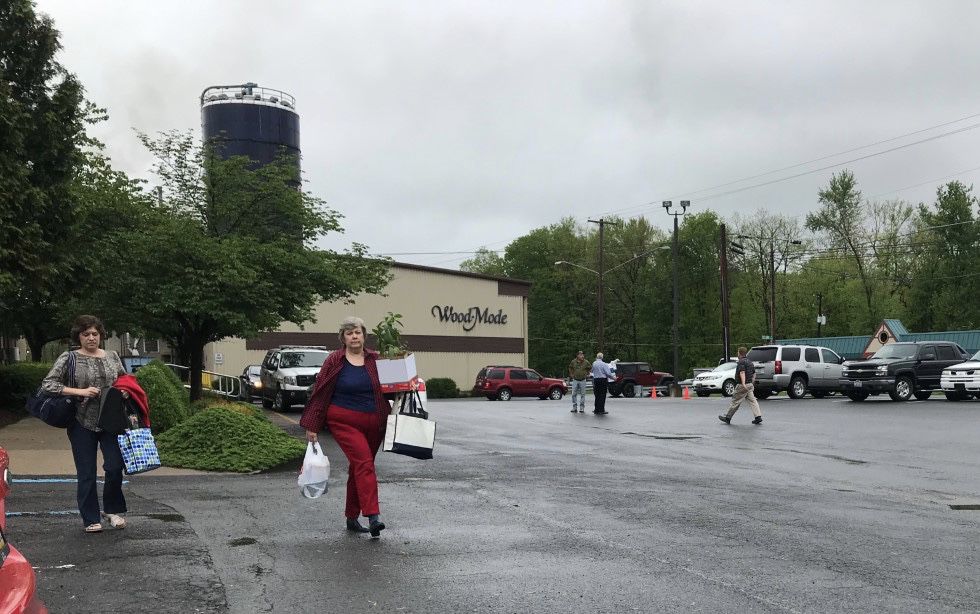 Employees walk out of Wood-Mode in Kreamer on Monday afternoon after employees were informed the custom-cabinet maker is closing permanently. 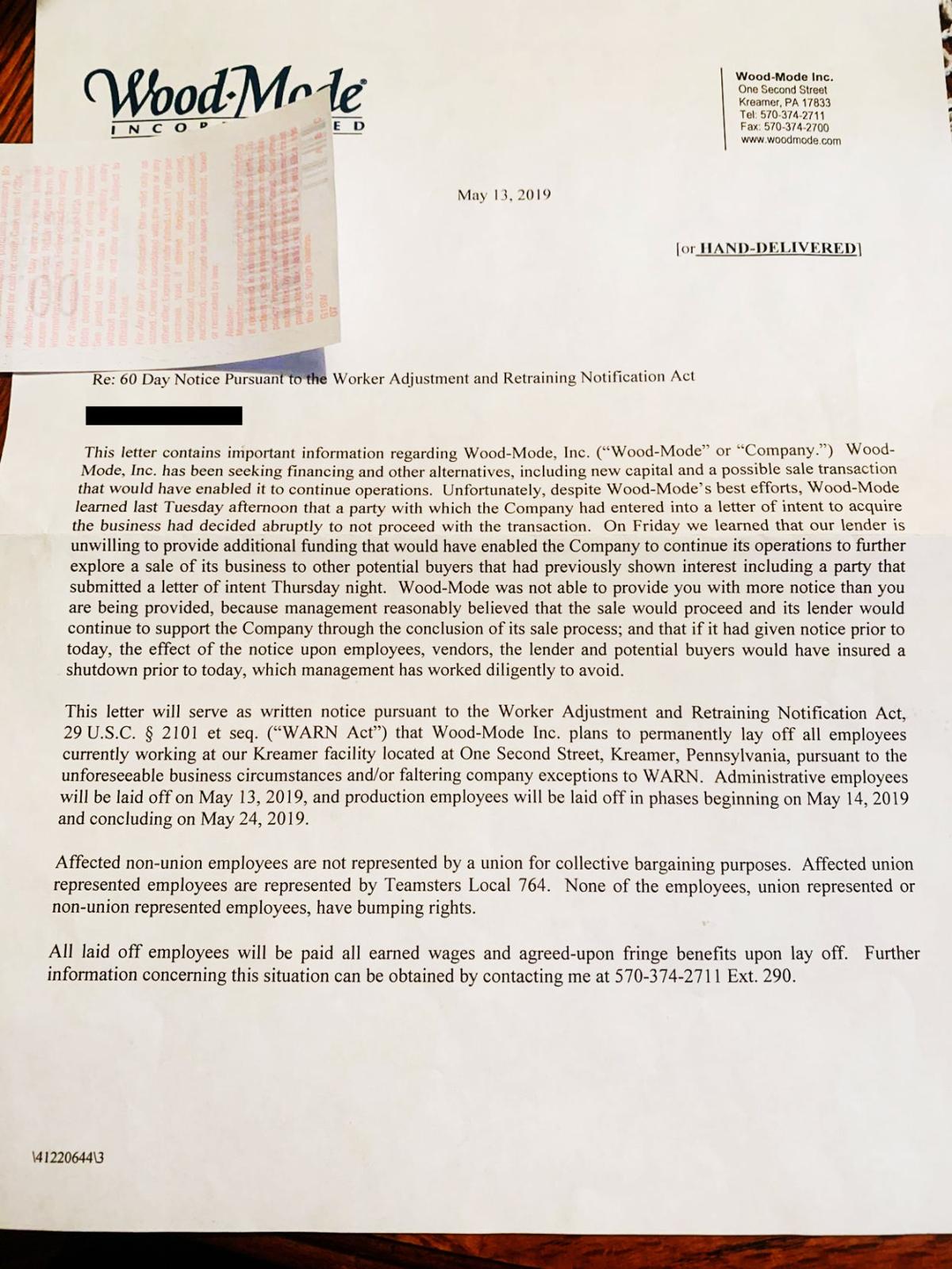 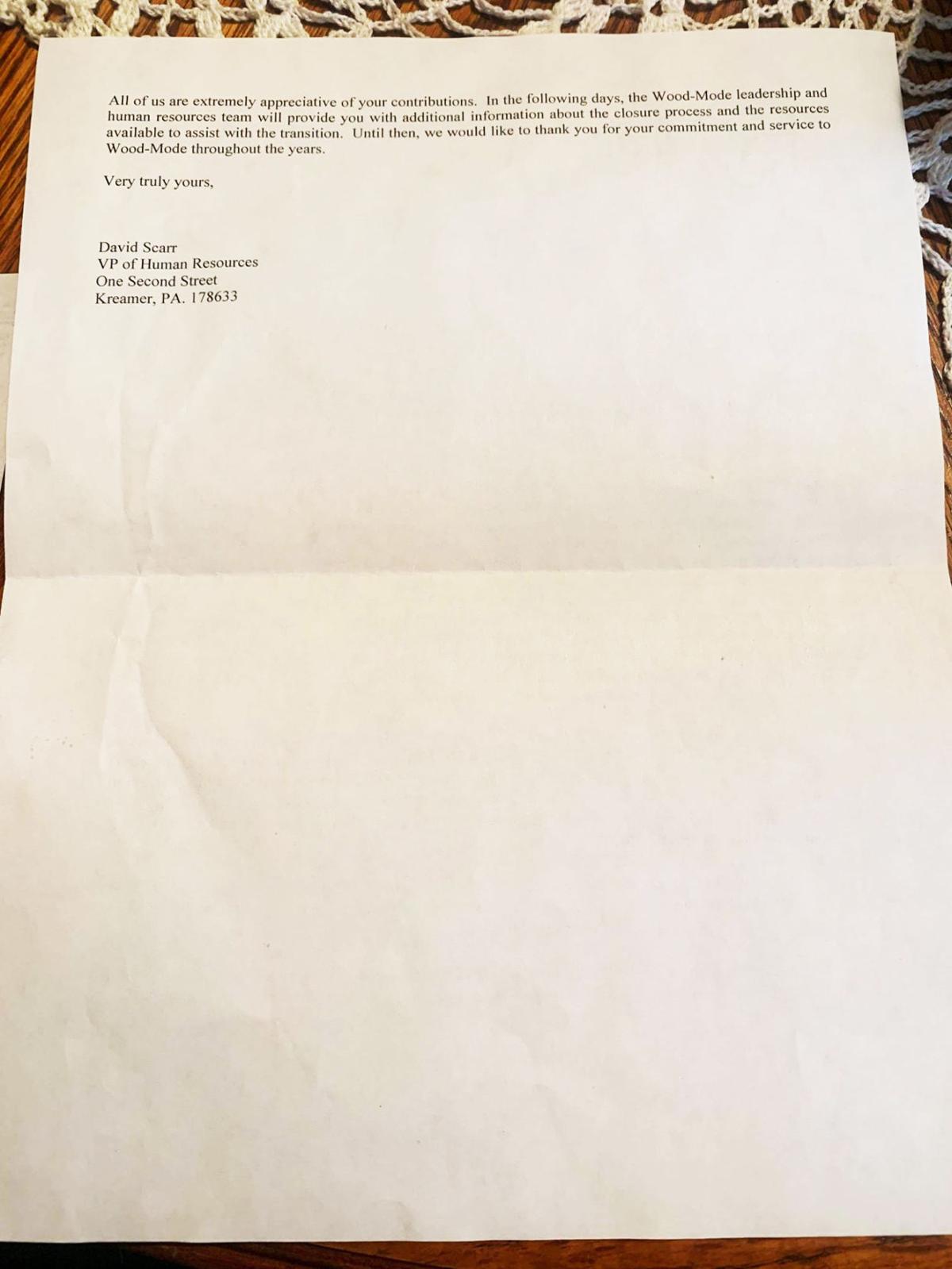 Tammy Heeter and Todd Foreman hug in the parking lot of Wood-Mode after employees were told the cabinet manufacturer was closing permanently on Monday.

Tammy Heeter and Todd Foreman talk in parking lot of Wood-Mode after employees were told the cabinet manufacturer was closing permanently on Monday.

Employees walk out of Wood-Mode in Kreamer on Monday afternoon after employees were informed the custom-cabinet maker is closing permanently.

KREAMER — Tim and Penny Benner somberly walked out of Wood-Mode Inc. Monday afternoon after being abruptly notified along with nearly 1,000 other employees that the 77-year-old business was closing immediately.

“I’m not surprised because we’ve known for months that something was happening, but I’m shocked that it happened this fast and we didn’t at least get a 60-day notice,” said Tim Benner, a 61-year-old final inspector who has worked at the plant for 41 1/2 years.

Wood-Mode spokesman David Scarr said in a statement that after a deal to sell the company to another firm fell through early last week, officials were notified on Friday that its prime lender was “unwilling to provide normal funding” that would have allowed the custom wood cabinet manufacturing business to continue operating, leaving “no choice but to make the difficult decision to wind down its operations.”

In one instant, Benner and his wife, a 10-year employee, lost both incomes.

“I don’t know what we’re going to do,” he said as they stood outside the plant consoling other employees who received word at about 2:45 p.m. that they were being permanently laid off.

“I expected to retire here,” said Tammy Heeter, 59, who was employed at Wood-Mode for nearly 20 years. “Now I’m thinking about paying bills and the lack of insurance.”

Six state police troopers, three Snyder County sheriff deputies and Middleburg Borough police were stationed at the plant as employees walked to their cars, many carrying boxes of personal items.

“It’s terrible for Snyder County. Whether you work here or not, we’re all going to be affected,” Snyder County Sheriff John Zechman said.

State Rep. Fred Keller, R-85 of Kreamer, said his brother-in-law has worked at Wood-Mode since 1977 and was among the nearly 1,000 employees laid off on Monday.

“We are working to get all the resources available to help these families,” said Keller, referring to the concerted efforts of state Rep. Lynda Schlegel Culver, R-108 of Sunbury and state Sen. John Gordner. “It seems like it came out of the blue.”

Snyder County Commissioner Joe Kantz said he is also looking into the lack of advance notice for employees on the company closure. According to the Worker Adjustment and Retaining Notification Act, workers must be provided 60 days notice in advance of “covered plant closings and covered mass layoffs.”

There are some exceptions and Kantz said he and others are looking into whether Wood-Mode complied with the law.

“I am doing what I can to pull agencies together to make sure the employees have a place to go for a ‘rapid response’ type approach for unemployment, job searches, and basic needs,” Kantz said. “I’m very disheartened by the fact that Wood-Mode management did not give any local or state government officials a notification of this terrible turn of events. The hundreds of employees of Wood-Mode and their families deserve better.

“I have received many phone calls from inside and outside our county, and I’m asking everyone to pray for the employees and their families. This is the time that we as a rural area will pull together to help our neighbors and remind America why Snyder County is a great place to live,” he said.

Scarr did not respond to a call for comment but in the statement sent out Monday he said laid-off employees would be paid “accrued wages.”

In an interview with The Daily Item in March, Scarr denied reports that the company was considering a buyout.

During a tour of the Kreamer plant in January 2018, Gov. Tom Wolf learned that the average length of service among employees was two decades.

“This is devastating news for these workers, their families and the Snyder County community, and I am thinking of all those affected today,” Wolf said. “I know from visiting there that Wood-Mode was more than an employer, it was part of the community. We are working to find out more details of this sudden announcement. My administration will begin immediately identifying ways that we can help these workers.

“I have directed the Department of Labor & Industry to immediately begin plans to engage with these workers about their futures, and a Rapid Response team is in the process of being deployed,” he said.

“My greatest concern is for the hundreds of employees who are now out of work,” she said. “I will use all my resources to help these people file their unemployment claims and find employment opportunities as quickly as possible.”

Tim Benner is still hopeful a deal can be worked out that will allow the company to continue operations.

“It’s not that we don’t have orders. This is a cash flow problem,” he said.

WOOD-MODE TO WIND DOWN OPERATIONS