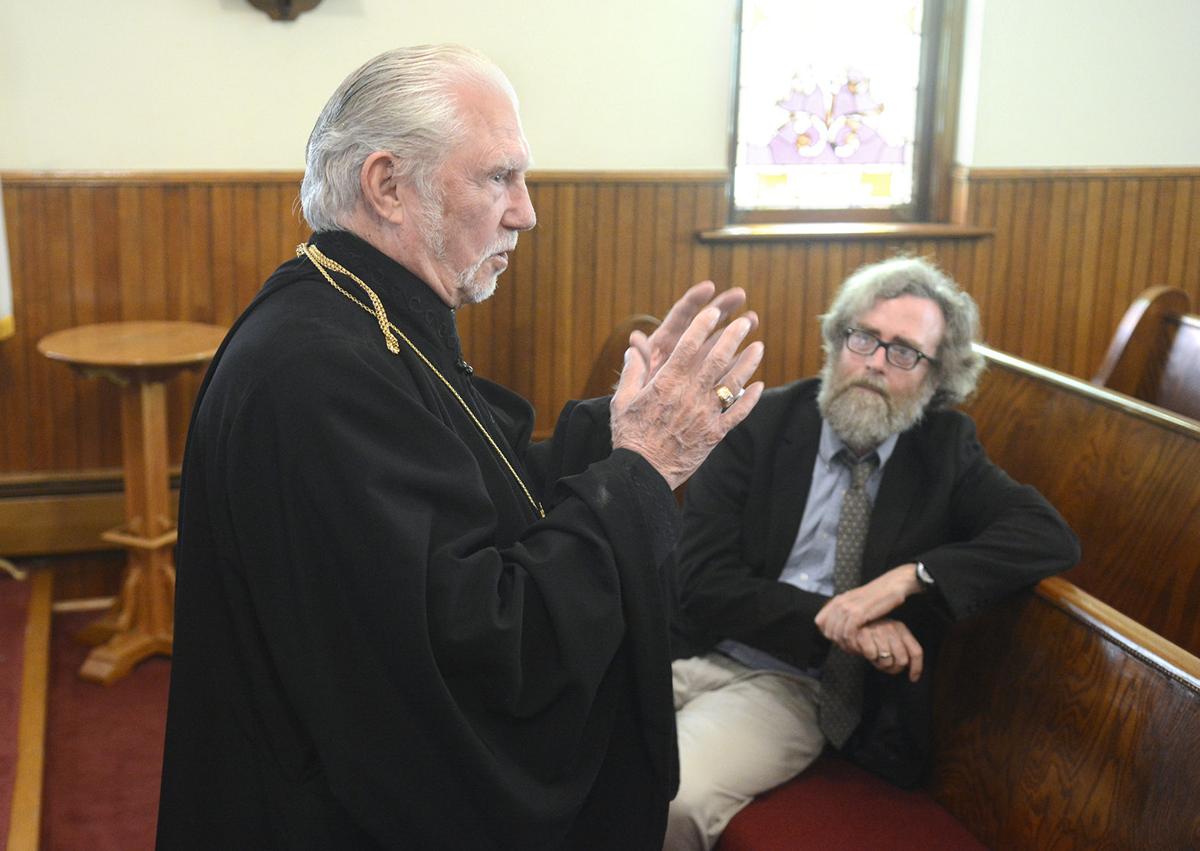 Father Claude Vinyard, left, talks with Alfred Siewers about the new Holy Protection Orthodox Church that will be starting in the St. John’s Lutheran Church in Winfield. 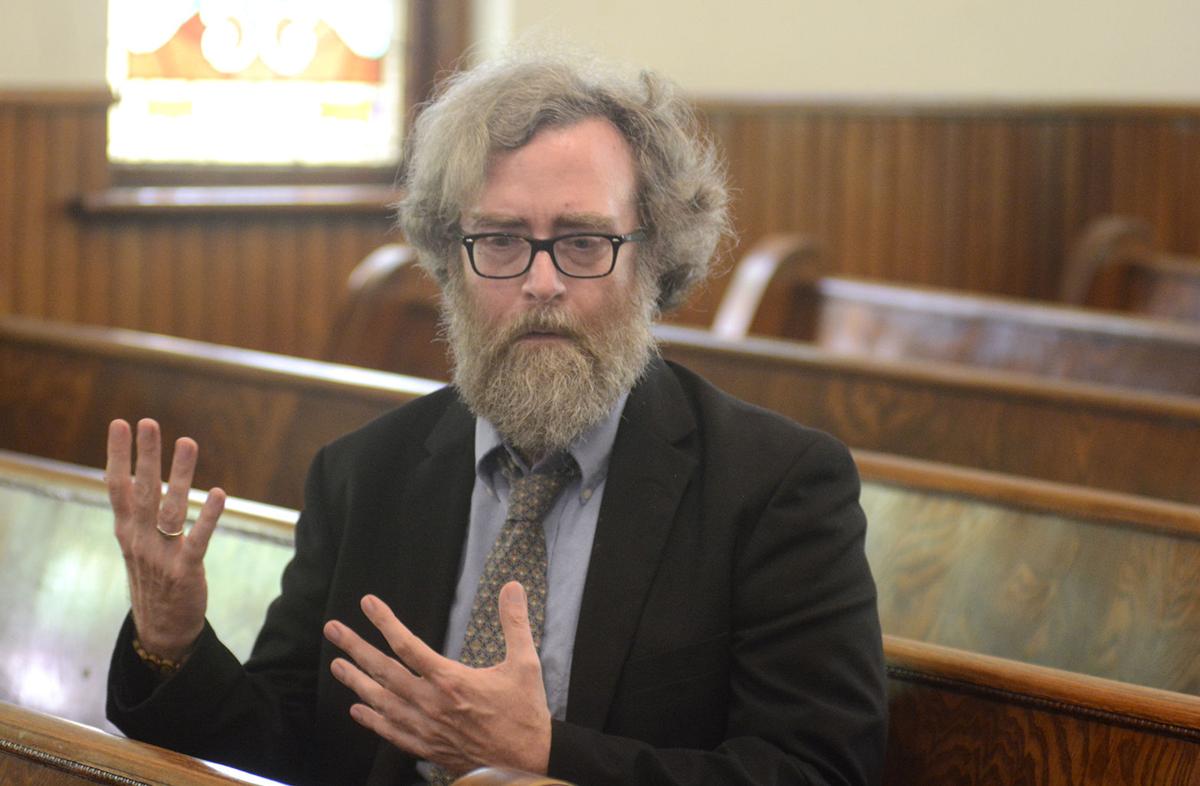 Alfred Siewers explains some of the customs in the Orthodox Church while talking inside St. John’s Lutheran Church in Winfield where the Holy Protection Orthodox Church will also soon be conducting its services. 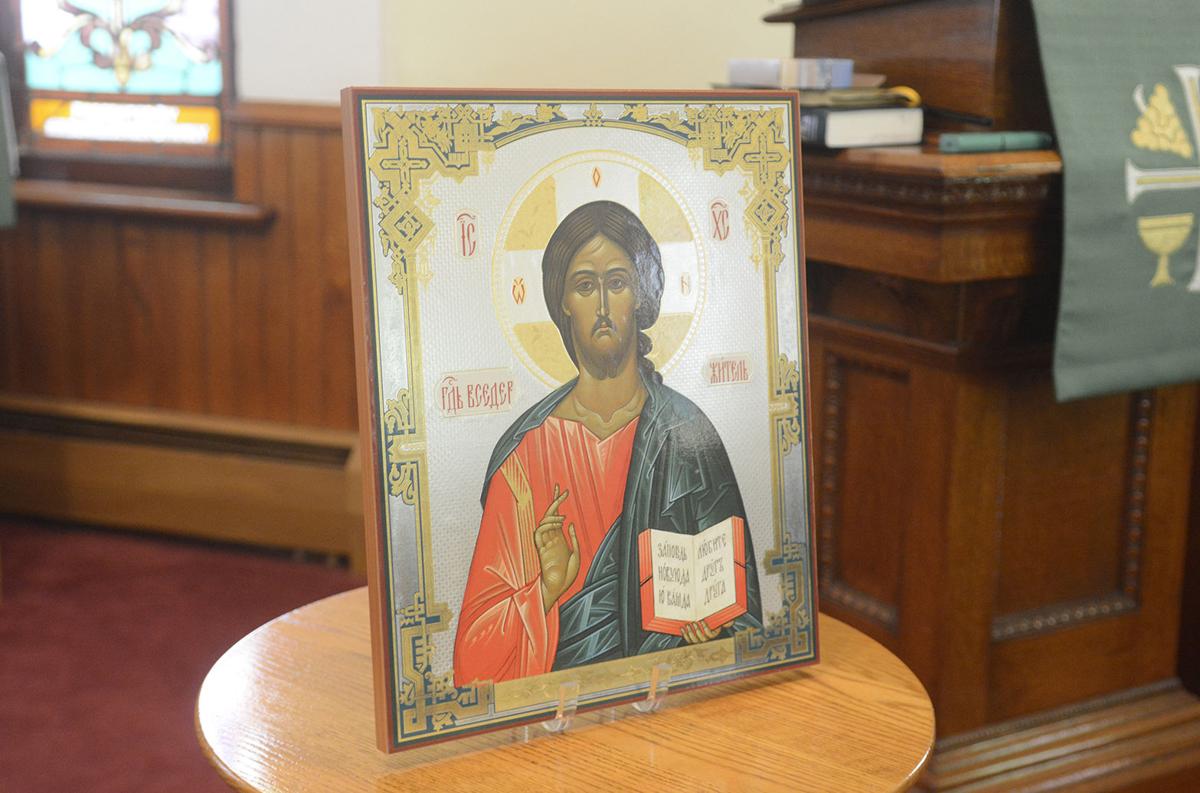 An orthodox image was already inside the St. John’s Lutheran Church in Winfield where a new orthodox church will be conducting their services.

Father Claude Vinyard, left, talks with Alfred Siewers about the new Holy Protection Orthodox Church that will be starting in the St. John’s Lutheran Church in Winfield.

Alfred Siewers explains some of the customs in the Orthodox Church while talking inside St. John’s Lutheran Church in Winfield where the Holy Protection Orthodox Church will also soon be conducting its services.

An orthodox image was already inside the St. John’s Lutheran Church in Winfield where a new orthodox church will be conducting their services.

How else to explain how he, an arch priest retired since 1993 and residing in Danville, and Alfred Kentigern Siewers, a Bucknell professor residing 13 years now in Lewisburg, have lived about 15 miles apart and just met now to found this church.

The two met earlier this year when Siewers and his wife, Olesya, were looking for a Russian church to attend that would be near their Orthodox friends. Olesya Siewers is from Russia, and Alfred Siewers was baptized in the Greek Orthodox church in 1999.

The couple wound up at a parish in Sugar Notch, Pa., Luzerne County, where Vinyard was serving. Several families who will be Holy Protection members ended up attending Russian Christmas there.

"The idea of a mission in Union County unfolded during the spring and early summer as we got to know him better." Alfred Siewers said of Vinyard.

That may be, but Vinyard said when he entered the host church, St. John’s Church of Dry Valley in Winfield, for the first time and saw an icon of Christ the Teacher, that confirmed this ROCOR parish, or Russian Orthodox Church Outside Russia, was meant to be.

The Rev. Ricky Phillips, who leads St. John’s, said the icon displayed at the church’s front was found when he was in seminary at Antiochian Village in Bolivar. He didn’t know that Christ the Teacher is one of the most widely used religious images of Orthodox Christianity.

"It was divine providence," he said.

Beginning at 11 a.m. Sunday, Sept. 13, the church will have services two Sundays a month. There are about seven families who are part of the parish so far, Siewers said, but anyone is welcome to take part in the services.

The Russian Orthodox church has an emphasis on heart and mystery, Siewers said.

"It’s very personal, not so much an organization as it is a family."

It has sacraments and liturgy and shares the Nicene Creed with other churches.

Traditionally, men attend church with their arms and legs covered. Women wear dresses, not pants, and if they receive communion, they wear something over their head, such as a chapel veil. Communion only goes to those who have received the sacrifice in the Orthodox church, Vinyard said, though he will offer a blessing to those who would like it.

Siewers, a church warden-elect, has lived in Lewisburg about 13 years. His wife, Olesya, is from Russia, and he was baptized in the Greek Orthodox church in 1999.

"I had been hoping to have a parish since we moved here," he said. "To us, it seems like a good time."

Vinyard had been pastor of Orthodox churches in Centralia and Mount Carmel and had been at other churches in New York state as well. He retired to Danville with his wife, since passed away, but stayed active with the church.

Built in 1909, St. John’s is hosting the new church, its leader the Rev. Ricky Phillips friends with Siewers.

"It’s amazing to me this is the first Russian Orthodox church in Union County," Phillips said, noting this church dates to the beginning of eastern Christianity. Holy Protection will take part in community service works with St. John’s, particularly Mazeppa’s Manna, a food and necessities bank the church operates.

"It was a blessing to meet him," Siewers said of Vinyard, who at 87 said he will hand over the church reins eventually when the parish is solidly established.

But the Russian Orthodox church in the middle of Pennsylvania farmland clearly has touched Vinyard, who almost seemed to glow as he talked about Holy Protector.

"I didn’t make it, God did," he said. "He brought us to here and now, it’s amazing. God stepped in and said ‘I want this parish in Lewisburg’ and here we are."

"It’s amazing how it happened," Vinyard said, citing a verse from 2 Corinthians, Chapter 2: " A door was opened for me in the Lord."

For more information on Holy Protection, visit its website: holyprotectionchurch.net