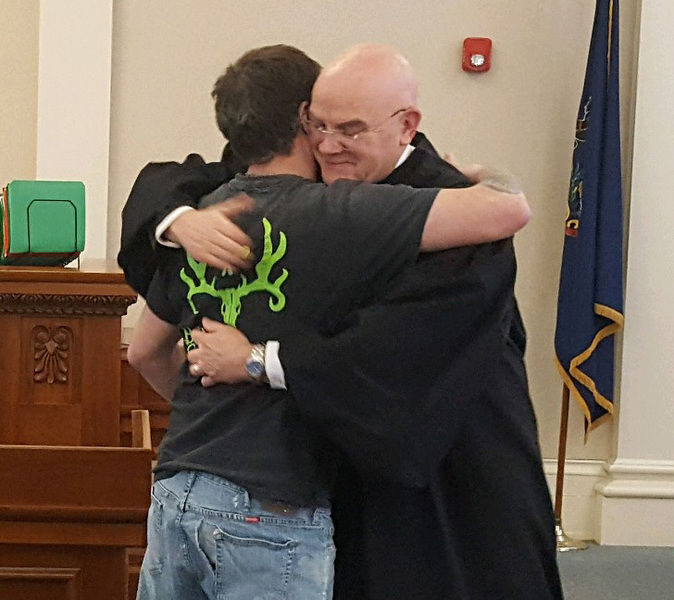 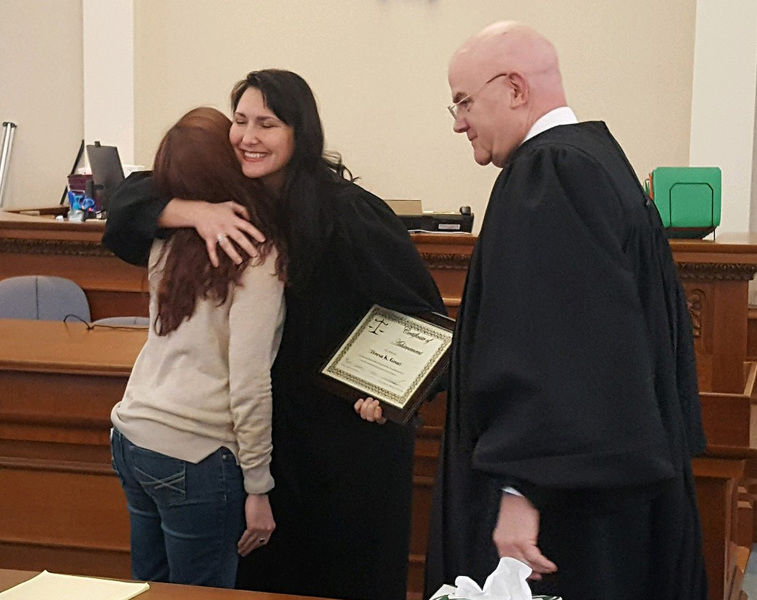 Teresa Groat hugs Magisterial District Judge Lori Hackenburg as Union-Snyder President Judge Michael Hudock looks on Wednesday. Groat is one of the four latest graduates of the Union-Snyder treatment courts. They celebrated during a graduation ceremony in the Union County Courtroom, Lewisburg.

Teresa Groat hugs Magisterial District Judge Lori Hackenburg as Union-Snyder President Judge Michael Hudock looks on Wednesday. Groat is one of the four latest graduates of the Union-Snyder treatment courts. They celebrated during a graduation ceremony in the Union County Courtroom, Lewisburg.

LEWISBURG — Alea Rudy dabbed her eyes with a tissue, choked up as she spoke but persisted Wednesday behind a podium inside the Union County Courtroom, sharing pieces of her recovery story during the 30th graduation ceremony for the Union-Snyder County treatment courts.

Jailed last year for violating probation while under supervision for a drug paraphernalia arrest, Rudy said she abandoned self-pity, ignored warnings from other defendants wary of drug court and let the process take hold.

She’s glad she did.

“I have a job. I have a house. I have a license and a car and, when I turn it on, it works,” Rudy said, eliciting laughter from dozens seated in the courtroom gallery for the celebration.

“I have a key to a factory,” Rudy said, noting the trust she’s earned from her employer. “A key!”

Treatment courts aim to thwart recidivism and instill a sober lifestyle through intensive supervision and access to treatment and other social services.

Treatment court was designed as a last chance for repeat offenders to avoid a state prison term. The Union-Snyder program has since adopted a fast-track model for people like Rudy — those deemed an early risk of reoffending.

There are currently 76 participants in the treatment court system, Diehl said, including four under the new Mental Health Court. The other courts are for drug offenders and impaired driving arrests.

According to Diehl, the local program has an 8-percent recidivism rate compared to a national average he estimated at 67 percent.

The Union-Snyder program achieved national prominence within the treatment court community, being designated in 2017 as a mentor court by the National Association of Drug Court Professionals and the U.S. Department of Justice. On Wednesday, it was announced Union-Snyder will mentor officials from other treatment courts nationwide through 2023.

Smith, one of the four latest graduates, credited the program with saving his life.

Smith left work early, his face and black t-shirt covered in dust from his manufacturing job, to make it to the ceremony. President Judge Michael Hudock, who develops relationships with the court participants, said it was a familiar sight.

“This program is exactly what I needed,” Smith said, explaining his life had lacked discipline and goals. “Without it, I would be dead.”

Like his fellow graduates, Hubler thanked probation officers and other treatment court team members with seeing him through the program. He thanked his girlfriend, too, for driving him to appointments.

Groat spoke to how she once sat in county jail on her daughter’s 8th birthday. She said her own actions and bad decisions led her there.

“Today, they have a mom who is clean, sober,” Groat said of her children. “They have their mom back.”

“The end is always amazing,” Rudy said of recovery, “if you just let it happen.”