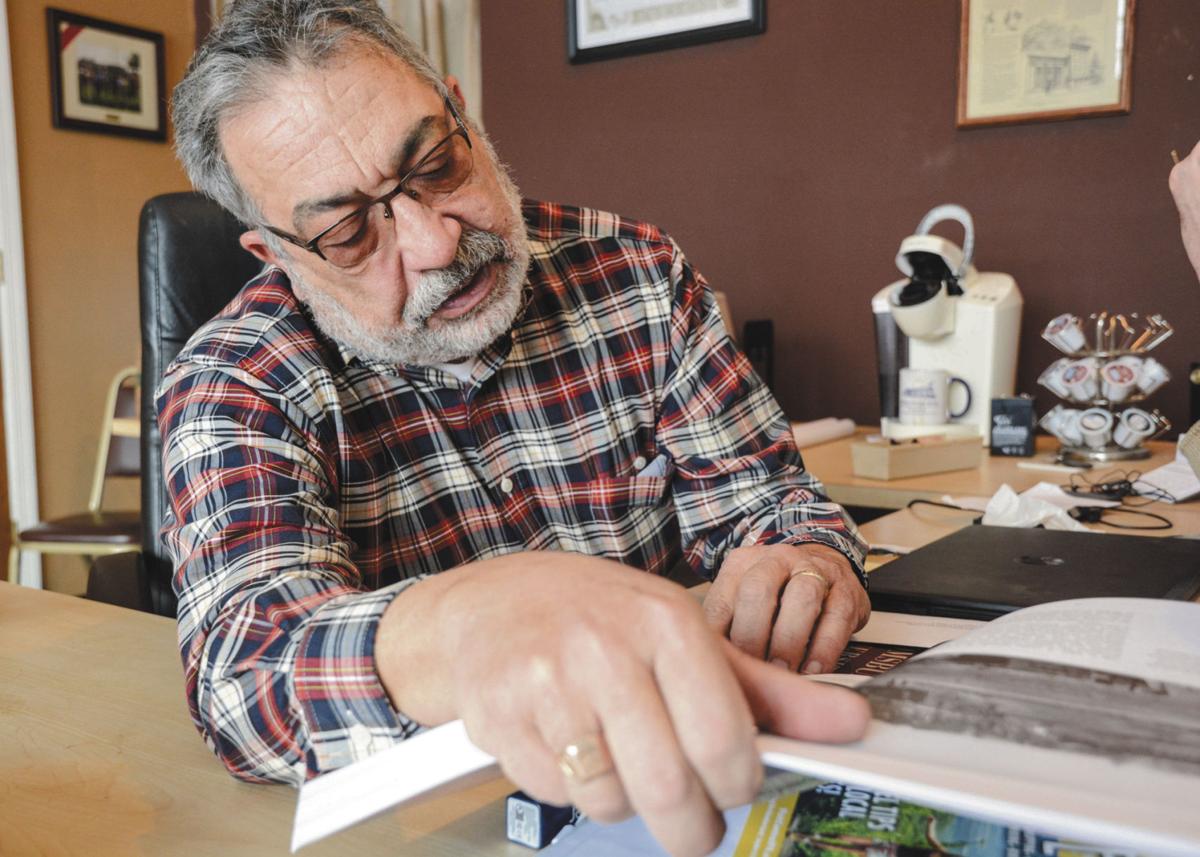 Robert Inglis/The Daily Item George Venios talks about the fire of 1880 in Milton and the damage it did. 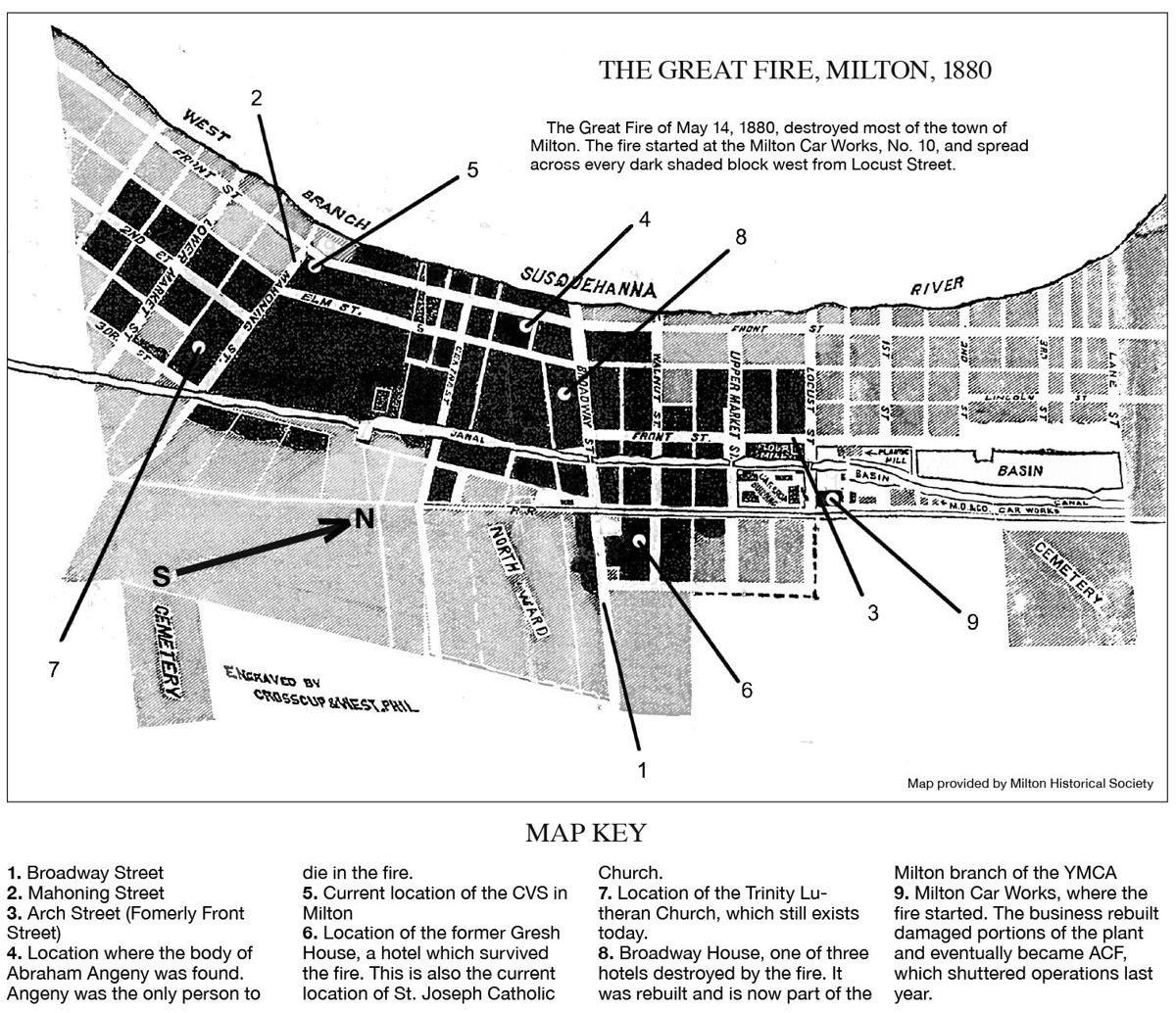 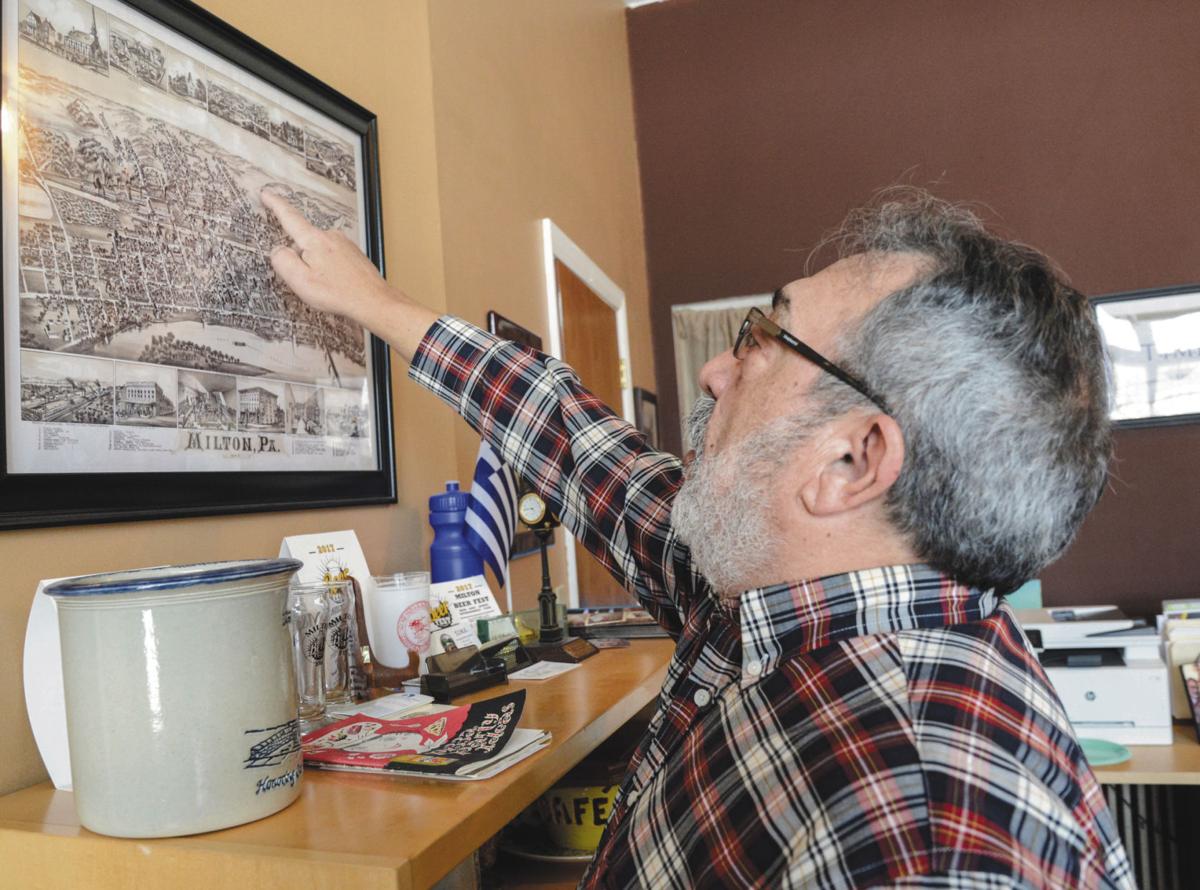 Robert Inglis/The Daily Item George Venios talks about where the fire of 1880 spread to in town.

A wind storm swept through Milton from the northeast as steam whistles cast a panicked call for help at Milton Car Works where fire ignited the carpentry shop roof 140 years ago.

Glowing embers lifted from the building and flitted above the flourishing river town. The burning debris drifted onto rooftops, destined to doom almost every structure that just minutes prior seemingly stood safe.

The Great Fire burned through nearly the whole of Milton in about four hours or so on May 14, 1880 — 125 acres from Locust Street south to the area of Lower Market Street, between Front Street and portions east beyond the Pennsylvania Canal and the Philadelphia & Erie rail line.

“Buildings were crashing and burning like kindling. Still, the strong wind propelled embers through the air starting new fires at remote locations. The residential areas, west of Arch to North Front below Locust and south to Broadway, were now ablaze. The effort to save buildings was abandoned; the town’s people were now making every effort to save their lives and a few worldly, cherished possessions,” local historian George Venios wrote in his broad book on Milton’s past, “Chronicles and Legends of Milton.”

Flames consumed 625 buildings. Nearly every church, manufacturer, business, school and home burned to the ground — about 75 percent of the town, in all.

“Imagine a rectangle one and a half-mile in length and half a mile in breadth; then imagine a regular oval described within this area, large enough to touch both sides and ends. All within this oval is ruins,” according to the Lewisburg Chronicle of May 20, 1880.

There was one death. An estimated 3,200 other people who frantically fled to safety survived, but lost their homes. Anything they weren’t wearing on their backs or carrying in their arms almost surely turned to ash.

The fire’s origin never was confirmed. Stretches of the U.S. including the northeast were in a drought and forest fires raged in many spots throughout the northern tier of Pennsylvania, into the Pocono Mountains and further east into New Jersey. Prevailing theories for the Milton blaze are that sparks flew from the sawmill onto the roof or perhaps a burning ember sailed from the smokestack of a passing locomotive.

The entire estimated losses suffered by the people of Milton that day totaled at least $2 million, according to published reports at the time. Insurance is said to have covered at least $500,000 in damages. Online converters estimate the value lost at more than $50 million in current-day value.

Two of the borough’s three public schools fell to ash, Center and Broadway schools. The First National Bank and Milton National Bank were lost. Brown’s 36 Drug Store, Heinen, Schreyer & Co. department store, the Academy of Music and the entire town hall and the Post Office were among the many losses.

Newspapers published cross-country in the days after the fire tell of the devastation suffered in Milton.

“Out on the open ground, in fields, graveyards and the river shore, are deposited household goods saved from the flames; and huddled together in little groups among this furniture are weeping women and children homeless and desolate. Such a scene as this presents is seldom witnessed, almost a whole town of thirty-two to thirty-five hundred inhabitants with nothing to shelter them from the chilly air,” according to Williamsport’s Daily Gazette and Bulletin of May 15, 1880.

Homeless inhabitants were left to seek shelter in the few places spared by the blaze. Some left for relatives’ homes in neighboring towns. Others stayed in hundreds of tents sent by the state and erected on the town’s outskirts.

Firefighters arrived on horse-drawn equipment and by rail. They came in aid of Milton’s own crews, arriving from Watsontown and Lewisburg, Sunbury, Danville, Northumberland, Williamsport and even Harrisburg.

Men from Sunbury’s Washington Fire Company loaded its steamer and hoses on two flat rail cars in the city. Members of the Good Intent Hook and Ladder Company did much the same and soon they were set off north to Milton.

“About a mile below the town, the Lewisburg engine could be seen on the river road, with four horses, also on their way to the doomed town. The scene as the train entered the town beggared description. The men at work in the rolling mill sent up a cheer. The roofs of the houses along the railroad were occupied by men with buckets while the streets were flooded with household goods over every description,” according to the May 21, 1880 edition of The (Sunbury) Democrat.

“The ladders were soon off the truck and a line of buckets formed,” the paper relayed. “The Good Intent had seen hard work at home, at Selinsgrove and other fires, and they never were driven from a house before but it was more than man could stand. … Slowly, sullenly down the street, the boys were driven.”

Through his research, Venios credits Sunbury firefighters with stopping the blaze from spreading further south beyond Lower Market Street.

The entire loss of life in the fire somehow only totaled one.

Abraham Angeny reportedly fetched a pail of water from a nearby property. He was 78 years old and in poor health. He was found the next day burned almost beyond recognition, laying behind the destroyed Huff House Hotel along Front Street between Broadway and Center Street.

“I had known about my great-great-grandfather,” said Larry Hill, of Indiana, curator of the Milton history website, www.miltonhistory.org, “but never had any pictures of him until about three years ago.”

Hill, a descendant of a Milton native, fell in love with the town as a child during summertime visits to relatives. The website is as much an ode to his own genealogy as it is to the lives lived by Milton’s sons and daughters. It’s rife with stories and photos, and features a search engine for portraits and information on citizens from long ago.

“It was so badly damaged,” Hill said of a photo of Angeny. “I’ll bet I spent about 300 hours restoring it to what you see on the webpage today.”

Some 20,000 strangers arrived by train and by carriage days after the blaze to observe the destruction. Like the response from firefighters in neighboring towns, so, too, did Milton’s friends beyond its borders respond for the suffering fire victims.

According to “Chronicles and Legends of Milton,” the telegraph wires were restored Saturday, the day after the blaze. A makeshift post office was established, too. The first emergency supplies from the state arrived by rail about 4 a.m. On Sunday, pastors began to hold services in the open air.

Food, clothing and cash donations came from across the Buffalo Valley and throughout the state after a local relief committee put out the call for goods including medical supplies. Milton had upscale housing and mansions owned by businessmen and industrialists. A former governor, James Pollock, saw his home destroyed. Those who lived in these homes had as much need for help at the time as the less fortunate citizens.

“Persons who were worth thousands of dollars yesterday morning appeared to accept charitable relief this evening,” The New York Times wrote of the scene the day after the blaze.

One writer from a local newspaper guessed Milton wouldn’t recover inside of five years. According to Venios, it took less than three for the town to get back to some sort of normalcy.

“It rebuilt so quickly that I really don’t think they missed much of a beat,” Venios said.

There remained wealth and resolve in Milton and the industries that powered the town’s economy before the blaze.

Venios wrote in his book that the downtown as it’s known today took about a decade to build up.

All seven of the churches rebuilt. New schools and manufacturing buildings, apartments and storefronts and homes were built.

Center Street School was rebuilt and reopened in January 1881, eight months after the fire.

Broadway House was rushed to completion. According to Venios, it was one of a dozen hotels that took shape downtown. It stands today as part of Milton’s YMCA.

Milton Car Works, which became ACF, a company recently shuttered in December, rebuilt the destroyed portions of its plant.

S. Dreifuss and Brother, which would come to be known as Wolf Dreifuss, rebuilt in the same spot at 49 S. Front St.

Ten years later, on the anniversary of the fire, thousands paraded in celebration of Milton’s rebirth.

“Although our wide pavements ordinarily will accommodate foot travel, to move along, on Wednesday last, was simply an impossibility, and in consequence the streets were used for parade both by the many organizers here and sightseers as well,” according to The Miltonian of May 16, 1890.

“The line of march was somewhat shortened by the threatening clouds, which barely permitted the parade to dismiss ere they opened their flood gates and let down upon the town such a volume of water, as would certainly have been a godsend that day when the town went up in smoke.”