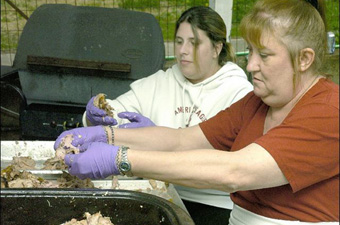 Theresa Kistler, Coal Township, front, who roasted the pork, pulls it apart in preparation for making sandwiches with the help of Gina Nejedly, of Shamokin. The food is being prepared for today-s Big House Benefit Run. 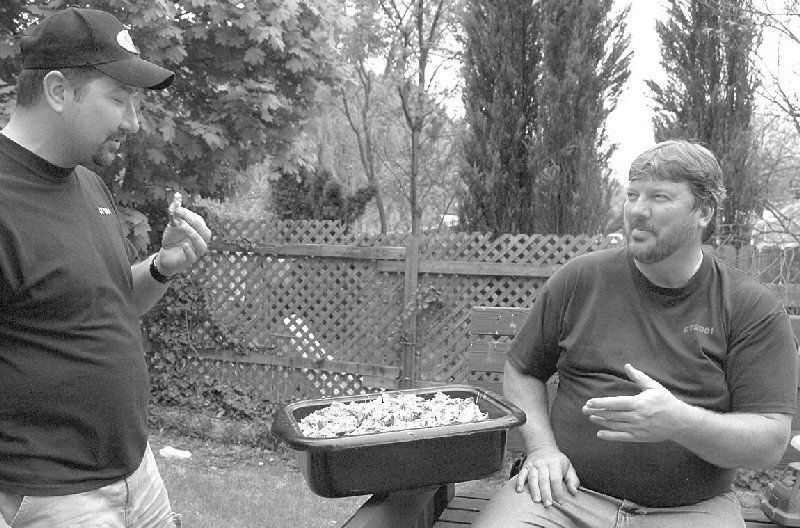 Theresa Kistler, Coal Township, front, who roasted the pork, pulls it apart in preparation for making sandwiches with the help of Gina Nejedly, of Shamokin. The food is being prepared for today-s Big House Benefit Run.

COAL TOWNSHIP -- Theresa Kistler was preparing lot of pork Thursday after work. Like the other volunteers for the State Correctional Institute at Coal Township's Big House Benefit Run, each works in a specific area. On Wednesday, Kistler, of Coal Township, started cooking 167 pounds of pork -- "I have four roasters at my house," she said -- for sandwiches. On Friday she took the pork with barbecue sauce to Lake Glory Campground, between Knoebels Grove Amusement Resort and Catawissa, where about 170 riders will be fed following today's ride, which will be held regardless of the weather. "We split up the work. Another volunteer gets the buns, somebody else gets chips and someone gets soda," Kistler said of the menu. Her husband, Don, one of the original organizers of the ride, helped with the cooking. He is a lieutenant at the prison and both will be riding on his Harley-Davidson today. "People come from all the institutions plus local riders and people who hear about it," she said. Derek "Jed" Nejedly, a correctional officer at the prison, will be on the lead bike for the ride. "Everybody has a duty. I take care of the route and the poker run," he said of riders picking a card at each stop with the highest hand winning at the end of the 70-mile ride. Proceeds benefit the nonprofit organization known as Corrections Officers Assistance League (C.O.A.L.) helping employees or their family members suffering from accidents or who have died. The benefit began in 2000 when two employees were stricken with illnesses. Due to the long recovery time, they depleted all their accumulated leave and were no longer being paid. "Over the years we have helped out several staff members financially in a time when they were not receiving any income," according to the letter announcing the event. The organization doesn't disclose how much it has collected since Nejedly explained "the inmates read the newspapers." The organization has been able to help more than 20 employees with proceeds from the ride. Theresa Kistler said last year's ride attracted 135 but this year she is planning on serving meals to 170 riders since pre-registrations were up by 25 percent. The other "Big House Boys" planning the event include Mark Kilmer, Percival Wiendsaul, Josh Fogelman, Mike Reeder, Mike Batiuk, Jon Kauffman, George Burns, Russ Goretsky, Brian Carpentier and Rob Kauffman. Some of the main contributors each year are Covenco providing soda, Middleswarth Potato Chips of Middleburg, Holsum Bakery, K&S Music, Danny Shingara, Pine Burr Inn, Mattucci's, Advanced Auto, JD's Inn, Wayside Inn, Pizza Hut, McDonald's, Burger King, Sheetz, Turkey Hill, TPC Power Center and Lake Glory Campground. n E-mail comments to kblackledge@dailyitem.com.