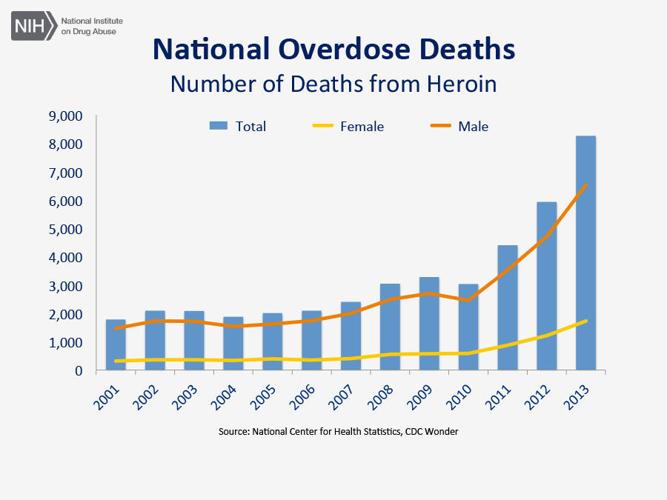 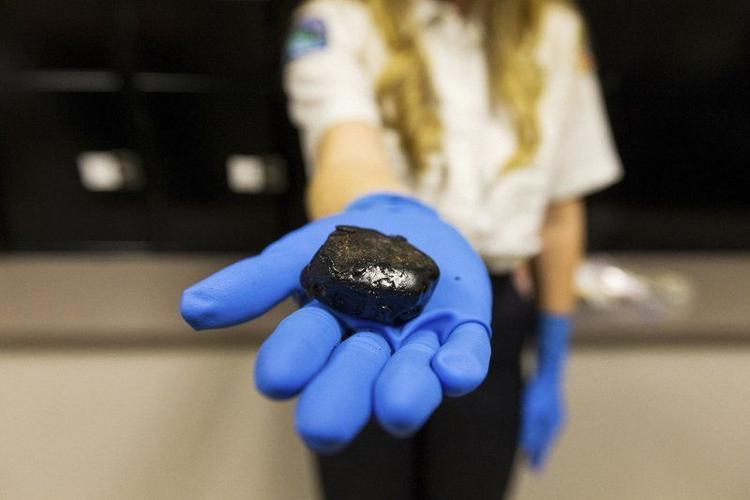 In this Jan. 27, photo, 39.6-grams of black tar heroin, with a street value of about $12,000, is among many other heroin-related items in Post Falls Police Department’s evidence room in Post Falls, Idaho. Heroin use is on the rise in many areas of the country.

In this Jan. 27, photo, 39.6-grams of black tar heroin, with a street value of about $12,000, is among many other heroin-related items in Post Falls Police Department’s evidence room in Post Falls, Idaho. Heroin use is on the rise in many areas of the country.

Death certificates for victims of fatal heroin overdoses in Lycoming County are being marked as homicide for the first time under Coroner Chuck Kiessling.

The change may not directly impact criminal casework, but Kiessling said it will garner greater attention for what many medical and law enforcement professionals are now calling an epidemic.

“That’s kind of my point,” he said. “It doesn’t seem to be raising enough eyebrows in the community.

“Drug dealers are murderers. If you chose to sell heroin, you’re killing people and you’re murdering people. You’re just as dead from a shot of heroin as if someone puts a bullet in you.”

“It will definitely make people take notice. The homicide rate in Pennsylvania will pick up. That’s what you want, you want to bring attention to it,” said Kelley, whose county has six confirmed or suspected fatal drug overdoses so far this year, including three within 10 days this month.

Standard practice is to mark the manner of death as accidental, Kiessling said. As the frequency of heroin overdoses rises throughout the state — drug overdose deaths increased 13 percent from 2013 to 2014, according to the Centers for Disease Control and Prevention — Kiessling said it’s time to change protocol.

Kiessling ruled one overdose case as homicide so far in 2016. Toxicology testing is pending in another four cases, he estimated. If the return is that heroin or another illegal narcotic is the cause of death, Kiessling said those deaths also will be ruled as homicide.

Pennsylvania statute on criminal homicide allows for a charge of Drug Delivery Resulting in Death, which carries a maximum penalty of up to 40 years imprisonment.

“While law enforcement investigates every overdose death, Drug Delivery Resulting in Death cases remain difficult cases to prove and prosecute,” Linhardt said. “In fact, we have been able to prosecute only a handful of such cases with varying degrees of success.”

Where facts and evidence allow, Linhardt said his office will “continue to aggressively prosecute these cases where we are able.”

Tony Matulewicz, Northumberland County district attorney, discussed the issue with Kelley and said he’s going to research the matter. He also noted existing statute governing death resulting from overdose and said the question is whether a coroner’s ruling would allow law enforcement to seek out a homicide charge.

Kiessling has a 35-year career combined in emergency medical services and coroner work, which he began in 2000. He said he first discussed using homicide as a manner of death for certain drug overdoses with both his office’s solicitor and the state coroners association. It’s non-traditional, but he says nothing in state law prevents it.

He said he won’t change procedure for opioids like oxycodone if the victim has a valid prescription.

Dominick Adamo is coroner in Union County, where there have been three confirmed or suspected overdose deaths in 2016, including two involving heroin.

He said he’s open to the idea of ruling a manner of death as homicide in overdose cases but isn’t convinced, in part because it’s unconventional. While someone is responsible for delivery, Adamo said the overdose victim is responsible for acquiring the drug. He also said the victim’s family must be considered.

“If you see homicide on a death certificate, it could be traumatic,” Adamo said. “I see why they’re doing it to try to get attention and try to stop it. Maybe that will be an avenue.”