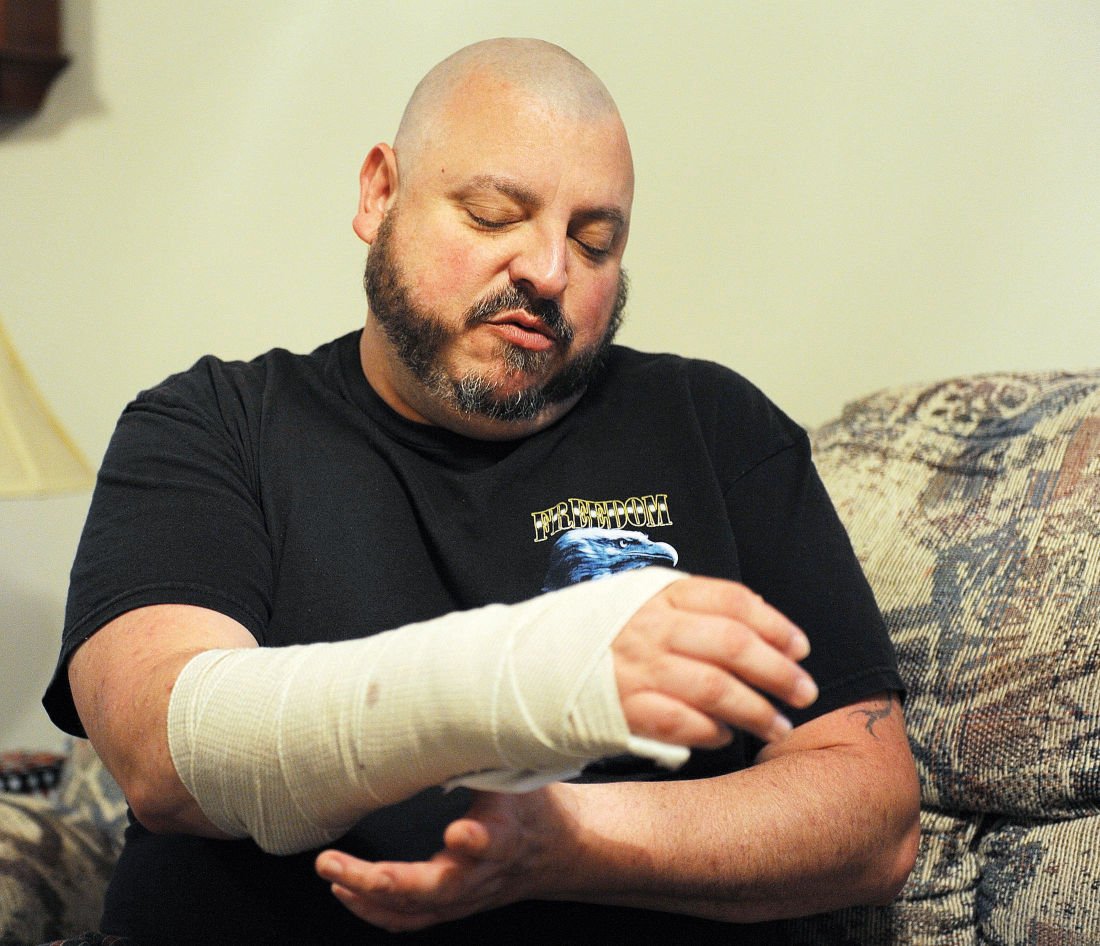 Amanda August/The Daily ItemDarren Troup, of Northumberland, talks Wednesday about health ailments he blames on toxins at Fort McClellan, near Anniston, Ala., where he served in 1990. He is fighting the VA, which he says won't help him. 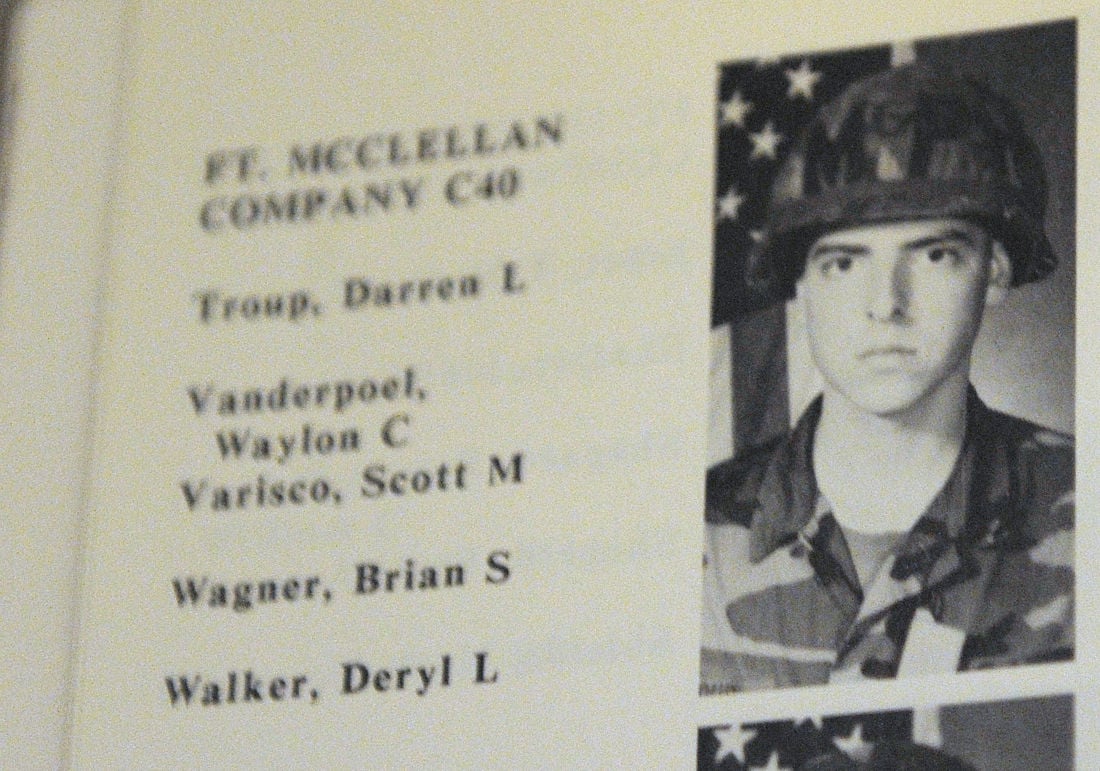 A photo from basic training at Fort McClellan, in Alabama, of Northumberland resident Darren Troup.

Amanda August/The Daily ItemDarren Troup, of Northumberland, talks Wednesday about health ailments he blames on toxins at Fort McClellan, near Anniston, Ala., where he served in 1990. He is fighting the VA, which he says won't help him.

A photo from basic training at Fort McClellan, in Alabama, of Northumberland resident Darren Troup.

NORTHUMBERLAND — Darren Troup is 42 and feels twice his age.

The Army veteran walks with a cane and is in constant pain.

Some of his teeth have rotted and are falling out. He can’t move the fingers on his right hand. His toes are swollen and he can’t slide on his shoes most times.

He needs medical help, but has given up on the U.S. Department of Veterans Affairs, even though he believes his ailments originate from his time served at Fort McClellan, near Anniston, Ala., in 1990.

“The VA won’t get involved because they say there has to be a direct link proven between the ailments I’m suffering from and my service time,” he said.

Fort McClellan was a virtual toxic waste dump in the late 1980s and 1990s, its environs poisoned by ionizing radiation and polychlorinated biphenyls.

The Environmental Protection Agency closed the fort in 1999.

“Before my time there,” he said from his apartment in Northumberland, “I worked at Wood-Mode. I didn’t have health problems. I never knew how bad things were when I was serving at the fort. After leaving the service, I was contacted by a woman that was sick and she was reaching out to other people who were based at McClellan.”

That woman, a former sergeant, asked Troup whether he ever had joint pain or back problems, whether he was getting sick.

Troup, and others around the country, form a band of brothers affected by a dark secret: They were unknowingly poisoned by the environment at Fort McClellan.

And now that Troup needs medical assistance, he says he can’t depend on the VA to help. It seems, Troup says, that the VA doesn’t want to deal with anything having to do with Fort McClellan.

Instead, he is a patient at Geisinger Medical Center, Danville.

“My girlfriend drives me,” Troup says. “But the doctors there, they don’t know what’s wrong. I keep telling them it is because of the PCBs, dioxins and other chemicals we were exposed to on the base.”

About five years after he left the service, Troup began experiencing back problems.

“They thought it was sciatica,” he said. “I’ve been living with pain since 2005 until now. I see so many doctors. ... They just give me pills, not narcotics. Things like steroids.”

A history of deceit

Fort McClellan is the former home of the U.S. Army Military Police and U.S. Army Chemical Schools, and was one of the largest training posts the Army had to offer.

Troup spilled blood, sweat and tears over the training grounds in 1990, he said.

Everyone lived in close quarters and prepared for assignments abroad — much like any other fort. But throughout the fort’s long run, there was a secret that nobody — save a chemical company — knew about.

Between 1933 and 1999, Fort McClellan was constantly exposed to major biochemical health hazards.

And the problem wasn’t confined to the base.

The people living in or around Fort McClellan were soaking up PCBs and other caustic chemicals through the air, water, soil and wildlife.

“We were laying in the soil on the firing range,” Troup said. “We showered with that water. We filled our canteens with that water during hydration formations, and we breathed in the toxins while running what is called Cardiac Hill.”

Troup — and thousands of others like him — never suspected a “damned thing.”

But chemical and agribusiness giant Monsanto knew — and it knew for nearly 40 years, “60 Minutes” reported.

According to a broadcast by the CBS-TV newsmagazine — and still available for view on YouTube — studies by Monsanto began in 1966, when it tasked a University of Mississippi biologist with testing the water.

That biologist placed fish into one of the streams to test the water’s effect on wildlife.

Within 10 seconds, the fish were disoriented.

Within four minutes, the fish were dead.

Monsanto filed the report away, never raising the concerns to environmental officials, Troup said. Many more tests would be conducted, but nothing was ever announced publicly.

It was the disposal processes that led to health concerns, Troup learned through his own investigations and information revealed by “60 Minutes.”

As Monsanto processed the now-banned industrial coolants known as PCBs at a local factory, it would discharge toxic waste into Anniston creeks and dumped millions of pounds of PCBs into oozing open-pit landfills, only to be discovered years later during excavations by builders, according to media reports.

Other excess Monsanto chemicals also made their way into Anniston’s environment, including different kinds of dioxins and herbicides such as Agent Orange.

The effects of these chemicals were far-reaching, Troup said.

Service members and civilians living in the area have since developed serious health conditions, including various cancers, autoimmune disease, heart disease and diabetes.

But these health concerns weren’t limited to the soldiers stationed near Anniston.

In 1999, the EPA deemed Fort McClellan a toxic site, and the base was federally mandated to be decontaminated.

That, Troup said, was only the beginning.

In 2003, the city of Anniston sued Monsanto, and the city was awarded $700 million to help care for exposed residents. Veterans of Fort McClellan, however, were never advised of the lawsuit, Troup said, citing various news sources.

They were excluded from it, as the Department of Veterans Affairs presumably would be responsible for any medical care or disability for the chemical exposure.

In 2009, “60 Minutes” reporter Steve Kroft called Anniston one of the most toxic places in America, furthering the need for the VA to take care of its veterans.

But the problem remains that care for these veterans of Fort McClellan still isn’t being given.

And Darren Troup is a primary example of that.

Upon learning of Troup’s predicament with the VA on Friday, the staff of U.S. Sen. Robert Casey, a Pennsylvania Democrat, agreed to help.