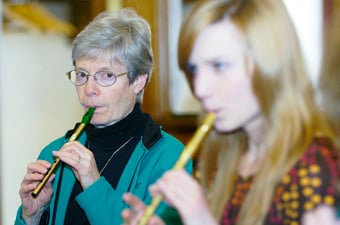 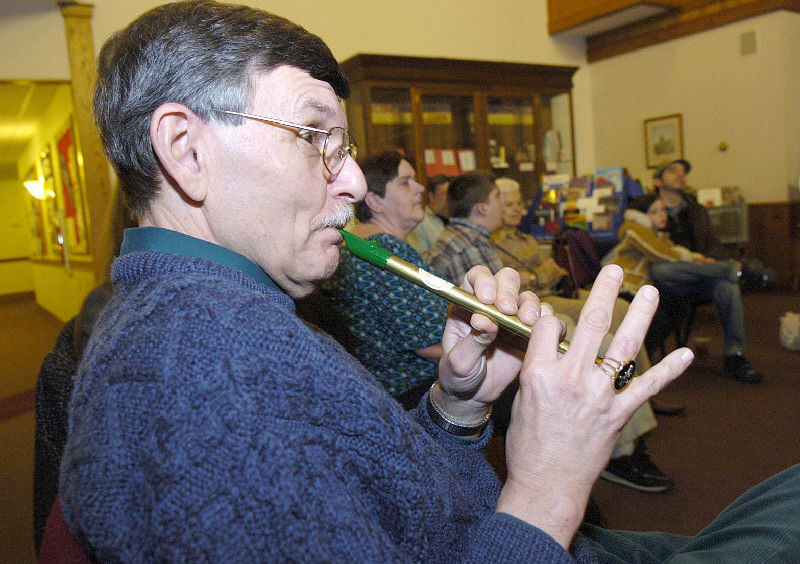 Ken Woods-Henderson, of Williamsport, plays a flute during a Celtic Festival activity in Lewisburg on Saturday.

Ken Woods-Henderson, of Williamsport, plays a flute during a Celtic Festival activity in Lewisburg on Saturday.

LEWISBURG -- Do you know what "deedling" is? That's what happens when people who can't play a tin whistle make the sound of the whistle with their voices, while people who can play a tin whistle play. "I'd like everyone to deedle," said Irish whistle instructor Kerrin Kampa, as she sat with about 17 people in the narthex of Christ Lutheran Church, in Lewisburg. "That's the sound the whistle makes, deedle-deedle." At Saturday's workshop on Irish whistles and flutes, one of several workshops conducted during Lewisburg's sixth annual Celtic Days, many in the audience deedled while Kampa and five other people played their whistles. "I like to teach by repeating the section over and over," said Kampa, who holds a master's degree in community music from the Royal Academy of Music in Limerick, Ireland. "That's how I was taught." First she played an Irish jig through twice, then she played shorter sections, at a much slower pace, so the five people holding whistles could see how she fingered the holes in her tin whistle, also known as a penny whistle, even though an inexpensive one costs about $11. She patiently played the figure over and over, exaggerating her finger movements so folks could see. Ken Woods-Henderson, of Williamsport, picked it up pretty quickly. "I've fooled with a penny whistle for several years," he said. He was able to play most of the song through, echoing Kampa, while other players had a bit more trouble. One player, a teenager, played only a few notes, fingering the other notes while watching Kampa carefully. After everyone had worked their way through the first half of the jig, Kampa introduced the second half, teaching it in the same manner. Finally, after about 40 minutes, she led the four in a rendition of the tune while the rest of the audience deedled and tapped their feet, clapping appreciatively at the end of the tune. The narthex of the church, with its soaring cupola, amplified the sound of the whistles, and later, Kampa's wooden flute. "I'd love to play a concert in here," she said. She played a traditional hornpipe, "Off to California," with lots of embellishments, fancy notes added to the melody. "That was ambitious," someone in the audience remarked as everyone laughed. "That's how fast it should be," said Kampa. "We won't do it that fast." She taught the hornpipe the same way she taught the jig, and in a short time, they could play the piece. Kampa led her five students in "Off to California," while the audience deedled along.