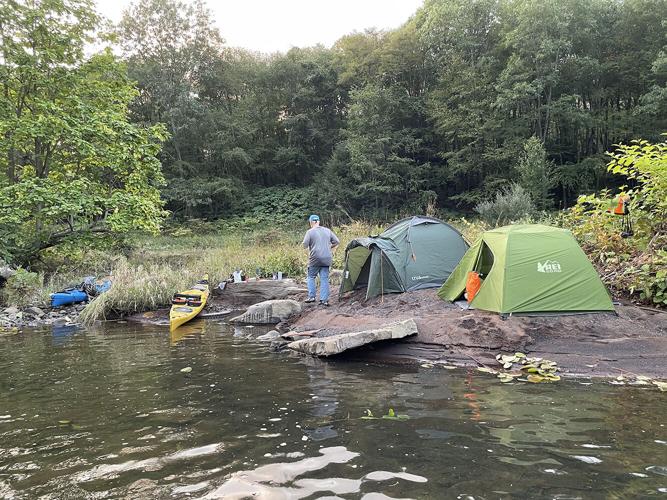 Mark Heller and John Laughlin slept in tents during their paddle down the Susquehanna River. 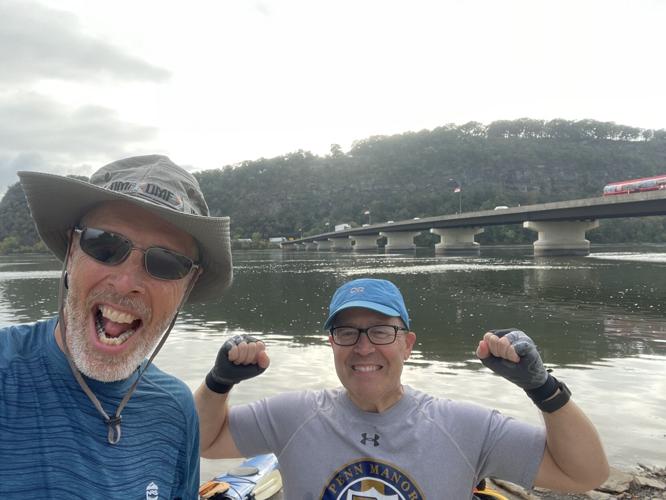 Mark Heller, left, and John Laughlin, both of Lancaster, paddled more than 660 miles of the Susquehanna River. 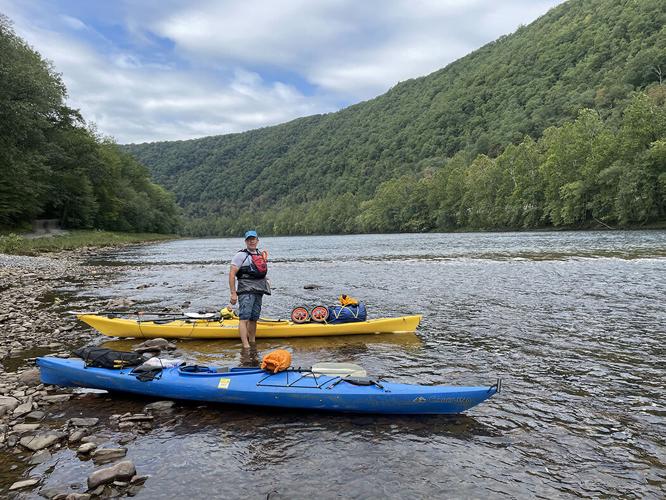 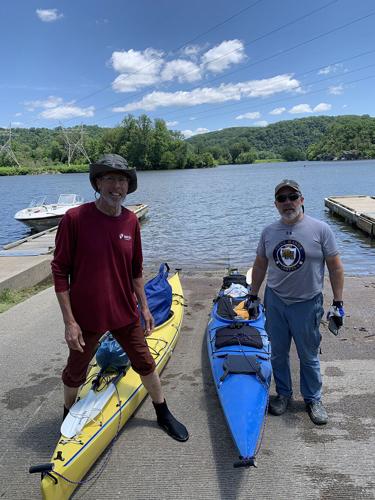 Photo provided Mark Heller, left, and John Laughlin, both of Lancaster, paddled more than 660 miles of the Susquehanna River.

Mark Heller and John Laughlin slept in tents during their paddle down the Susquehanna River.

Mark Heller, left, and John Laughlin, both of Lancaster, paddled more than 660 miles of the Susquehanna River.

Photo provided Mark Heller, left, and John Laughlin, both of Lancaster, paddled more than 660 miles of the Susquehanna River.

Paddlers from all over the state and beyond often dream of the day when they can take time off from their day jobs, pack up their paddling gear, and tackle a multi-day adventure on the Susquehanna River Water Trail.

America’s longest river to empty into the Atlantic boasts a multitude of paddling opportunities from a leisurely afternoon paddle to a multi-state adventure.

Two of the most notable long-distance routes along the Susquehanna include the 444-mile main stem paddle (known as the “444”) that runs from Cooperstown, New York, to Havre de Grace, Maryland, and the West Branch’s 228-mile paddle from Cherry Tree, Pennsylvania to Northumberland.

Only a handful of paddlers attempt these routes every year, but two Lancaster County residents decided to paddle not one, but both paddling adventures in a single year, racking up more than 660 miles of paddling along the water trail.

Mark Heller and John Laughlin, both, of Lancaster County, grew up paddling the Delaware River. While their paths did not cross until later in life, their shared zeal and passion for rivers sparked an idea unlike any either had ever undertaken.

Looking back on the intrepid adventure completed last year, Heller noted that their “444” expedition was really their first serious encounter with the Susquehanna River, and their first overnight trip along a waterway.

Fueled and inspired by the success story of their paddling peers, Laughlin and Heller began the process of planning their great water trail journey on the Susquehanna.

In the months leading up to each trip, Heller had to first wade through the waters of research.

“I pulled from many different sources, mining data from others who had done the trip, gathering a list of portages, and downloading all of that information into a GPS app that I could use in airplane mode while out on the water. New York was definitely a challenge to find any maps and information, but once I looked into Pennsylvania there were plenty of maps and the Susquehanna Greenway Partnership had a lot of great resources,” he said.

What most benefited the duo, though, was having some experienced paddlers along for the start of their journey.

“For the first three days of our 444 attempt, we were actually a group of five,” said Laughlin. “One of the guys had some great outdoor expedition skills, so we leaned upon him. After spending three days with him, we learned enough to get us through the rest of the journey on our own.”

While the main stem of the Susquehanna River is longer than the West Branch, the pair explained that the nature of this section is more conducive to those just getting started in the realm of overnight river trips.

“Starting on the North Branch, was the best way to do it because we could stop in towns. It eases you into things. If you forget something, you can take out at the next river town and find a convenience store,” Heller said.

As the pair continued down the North Branch on their 444 paddle, their confidence and growing overnight paddling expedition skills sparked an idea. According to Laughlin, “It was when we hit the confluence at Sunbury, that we started thinking, you know, the West Branch needs to be done too.” Halfway through their ambitious 444 paddle, the pair began planning part two of their adventure.

“We decided right there on the water to paddle it (the West Branch) in September,” said Laughlin.

Several months after their May paddle of the 444, Mark and John set out to tackle the 228-mile West Branch — bringing their paddling total for the Susquehanna River Water Trail to 672 miles in a matter of five months.

Given the remote and isolated nature of the West Branch, the pair were benefited by learning from paddling the more populated stretches of the 444

“That was the right way to do it, so by the time we did the West Branch, we were more self-reliant,” Heller said.

While the West Branch can be a challenge because of its remoteness, Laughlin and Heller said it is their favorite stretch of any river paddled.

“The West Branch far exceeded my expectations. It was just gorgeous; just spectacular,” said Laughlin. “I highly recommend the section from Shawville to Renovo, and I could see us doing that every year. You can close your eyes and open them and feel like you’re in Colorado or Montana. It’s wild.”

Perhaps the biggest surprise on this section was the appearance of a wild bull elk and two cows at the river’s edge.

“It surprised the living daylights out of us,” Laughlin added. “If we hadn’t just entered some rapids, we would have pulled out our cameras to take a picture.”

Further downriver, the duo could hear a herd of elk out in the state game lands. There was the call of the male bugle off in the distance, but it wasn’t close to the river.

Like the elk sighting, there were several other things that Mark and John were not prepared to see.

“As a kid I always had my feet wet, always muddy, always enjoying the water,” Heller said. “Out of the things I was not prepared for — number one was mud.” The two had to work hard to keep that squishy Susquehanna mud at bay. It found its way from the banks of the river to the inside of their tents, and somehow snaked its way inside their waterproof cases.

Thinking back on their paddle of the 444, they said they were also not prepared for the tides. For the lower piece of the river that empties into the Chesapeake Bay, Heller and Laughlin highly recommend checking the tidal charts.

Most strikingly, however, they said they were not prepared for the kindness of others.

The two were continually met with restaurants willing to fill their canteens with water, happy to stay late, or open early. They encountered welcoming landowners who allowed use of their private docks or a grassy patch to spend the night and genuinely interested people who showed kindness and excitement when learning of their journey.

“We were blessed,” Laughlin said. “We met so many wonderful people who were helpful and when we told them what we were doing they were even more helpful. It was nice having these cheerleaders along the way.”

While they were not prepared to meet so many kind strangers, they were prepared in terms of their packing list. At the top of their list of useful items were their kayak carts, which made portages so much easier, and their sickle and hand clippers for clearing brush to make camp.

Other useful items included a plastic hammer for tent stakes, a first aid kit, a hiker stove, a solar panel for recharging, at least three gallons of drinking water (they could refill in river towns), and water sterilization tablets as backup.

When asked if there was one item they found to be absolutely essential for a trip on the river, Heller jokingly replied, “I think a bottle of bourbon.”

While not on everyone’s packing list, the duo had tucked a bottle up in the bow of Mark’s kayak as a celebration drink when they finished their journeys. So, at the completion of both the 444 in Havre de Grace and the West Branch in Northumberland, they toasted to their success.

“I’ve got that same bottle and each time we took just one shot out of it, so there’s still plenty in there,” Heller said. “We have a lot of rivers we have to cover yet with that bottle.”

When asked what they planned to do next, they said they wanted to head back to their roots.

“We are hitting the Delaware next,” Laughlin said.