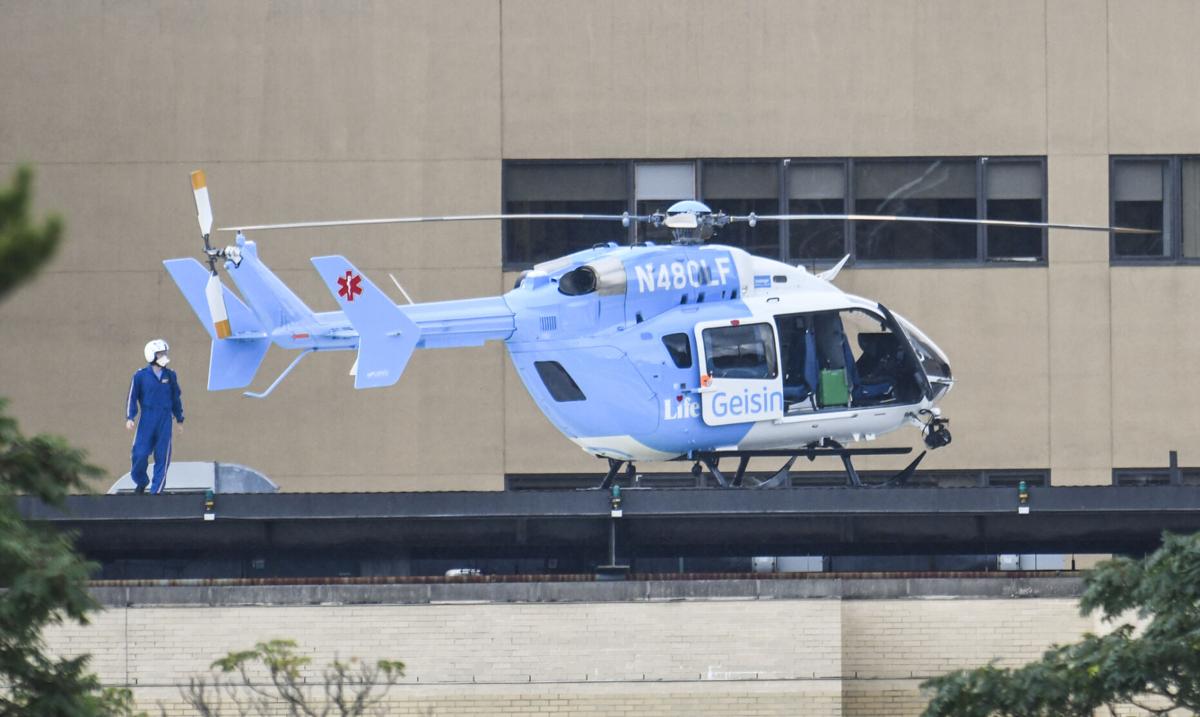 Life Flight pilot Jim Isaacs looks over the helicopter before taking off from the roof of Geisinger Medical Center in Danville on Tuesday. 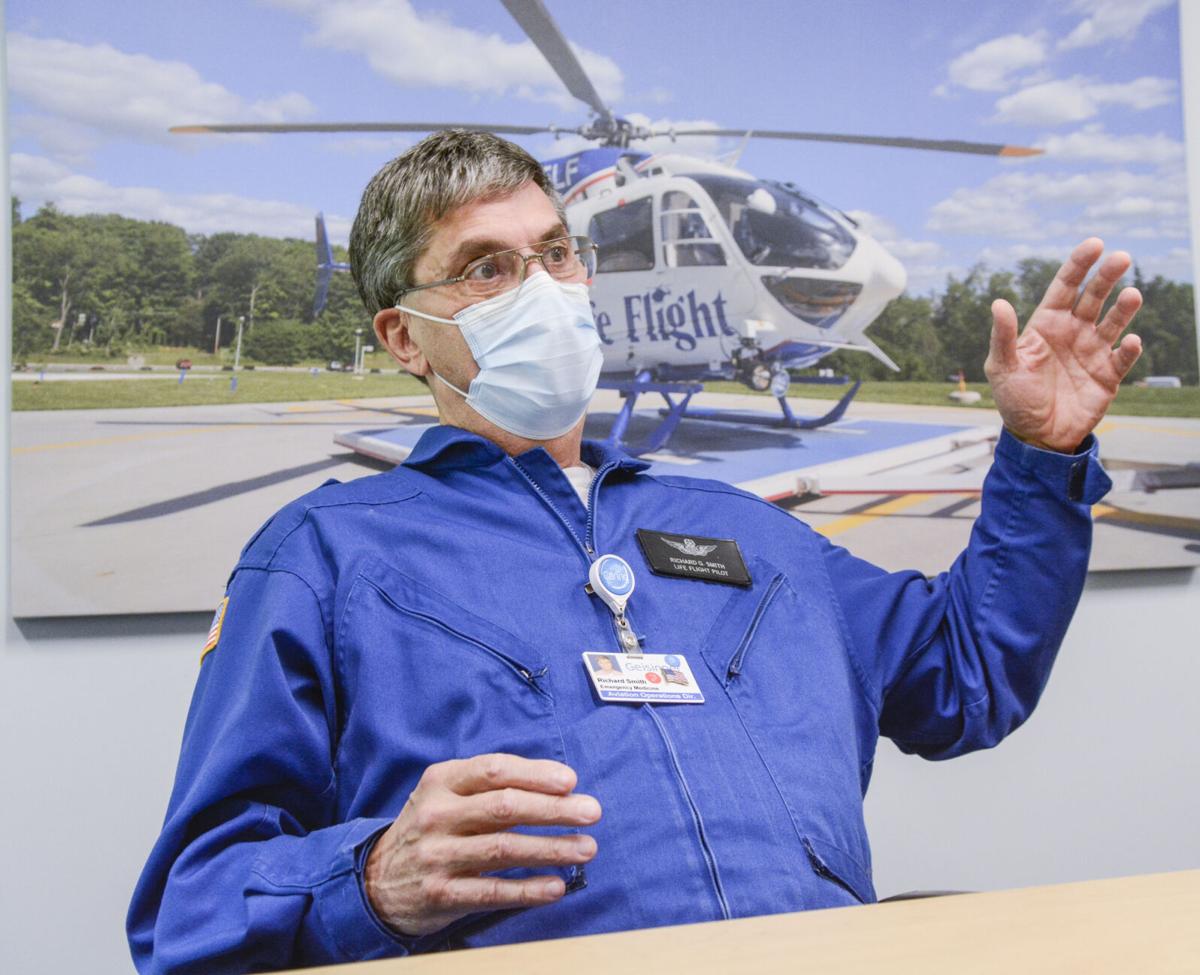 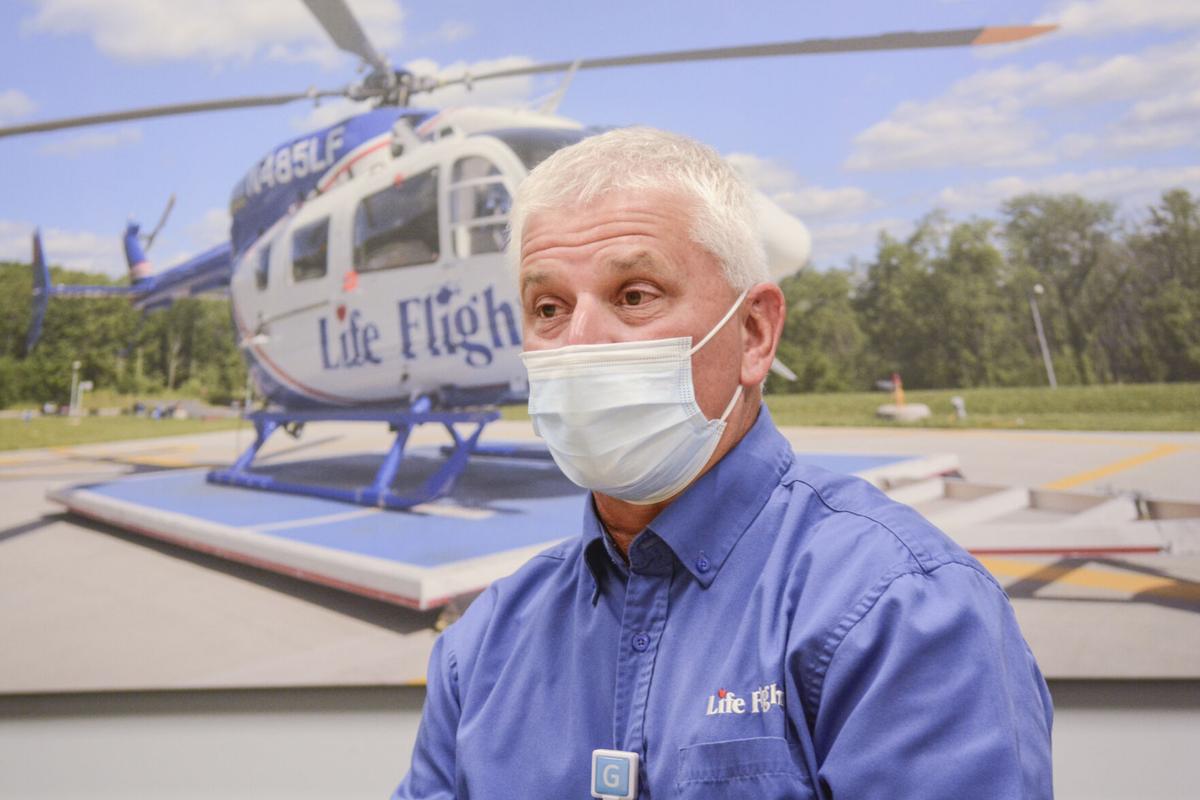 Robert Inglis/The Daily Item Life Flight Director Gerald Splitt talks about some of the changes in the Life Flight program over the years at Geisinger. 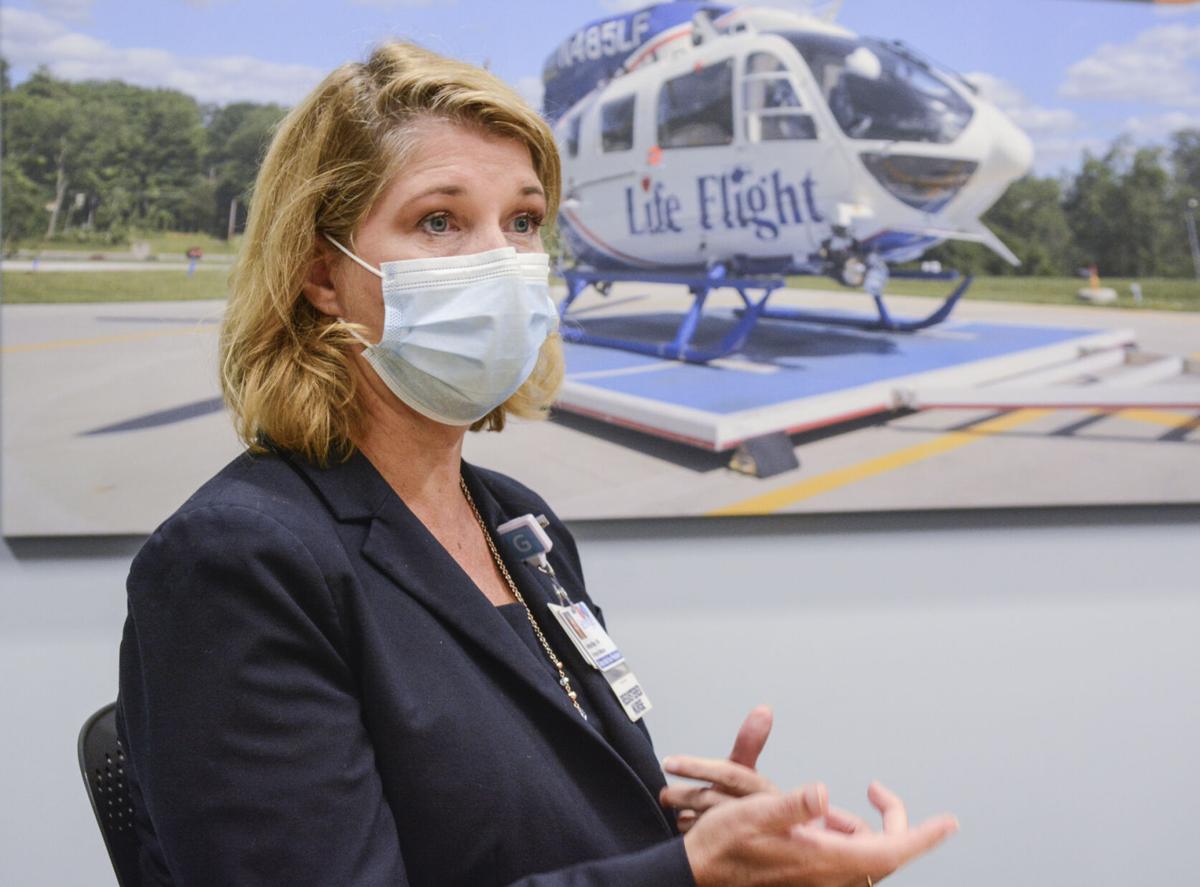 Geisinger Vice President of Emergency Medicine Andrea Wary talks about the importance of Life Flight to the community it serves. 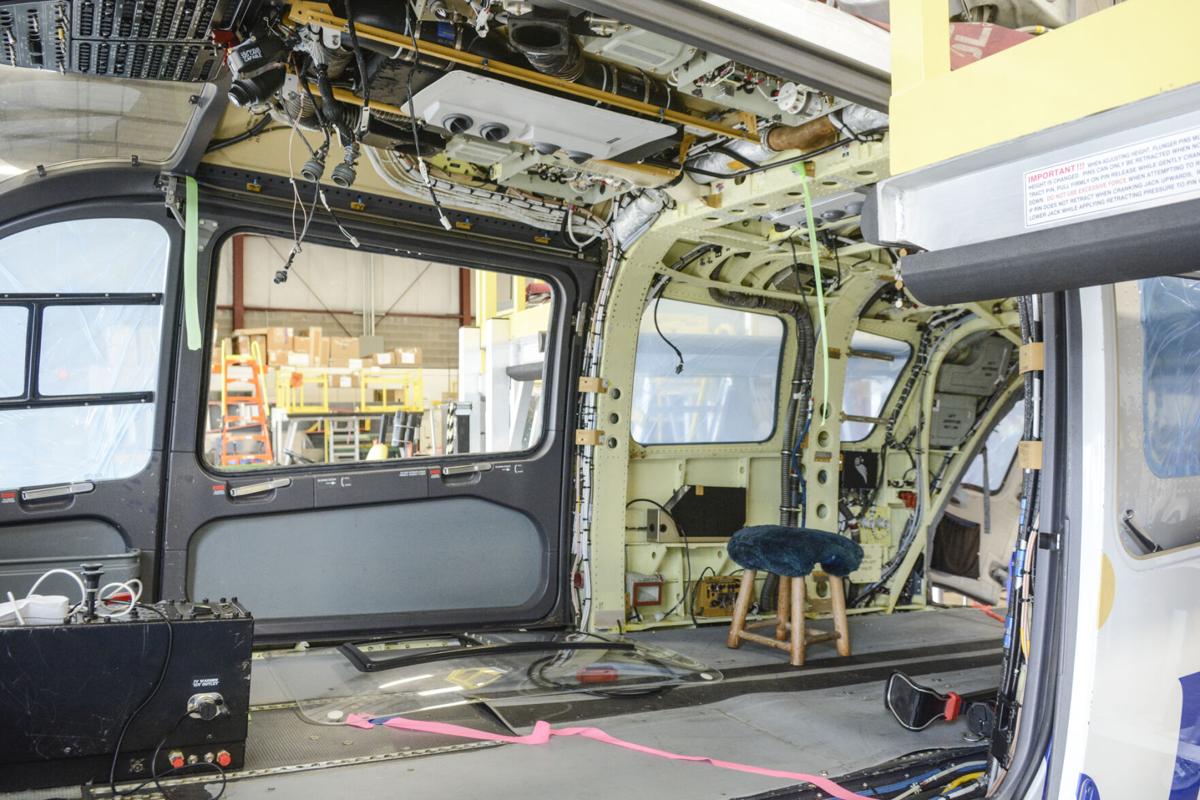 The inside of a Life Flight helicopter that has been taken apart for routine maintenance sits in the hanger in Danville. 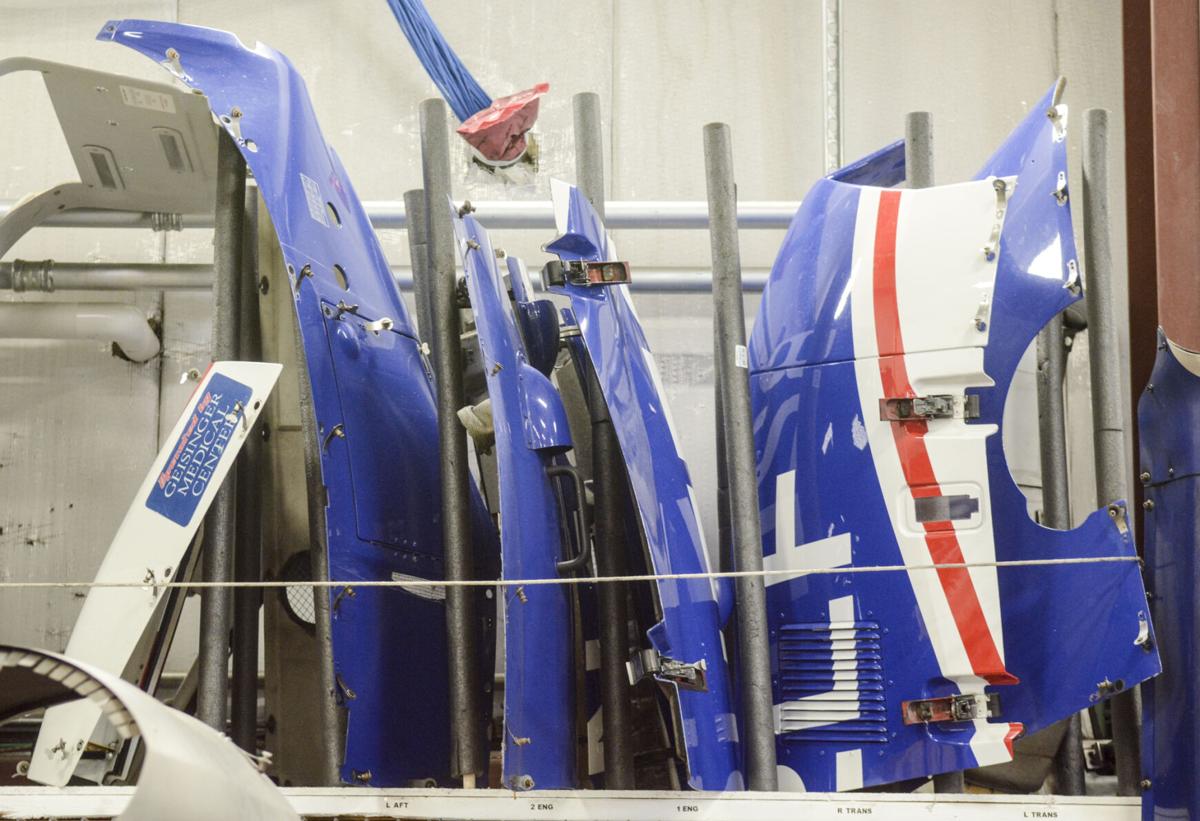 Pieces of a Life Flight helicopter that have been taken off for maintenance are systematically filed away waiting to be re-assembled. 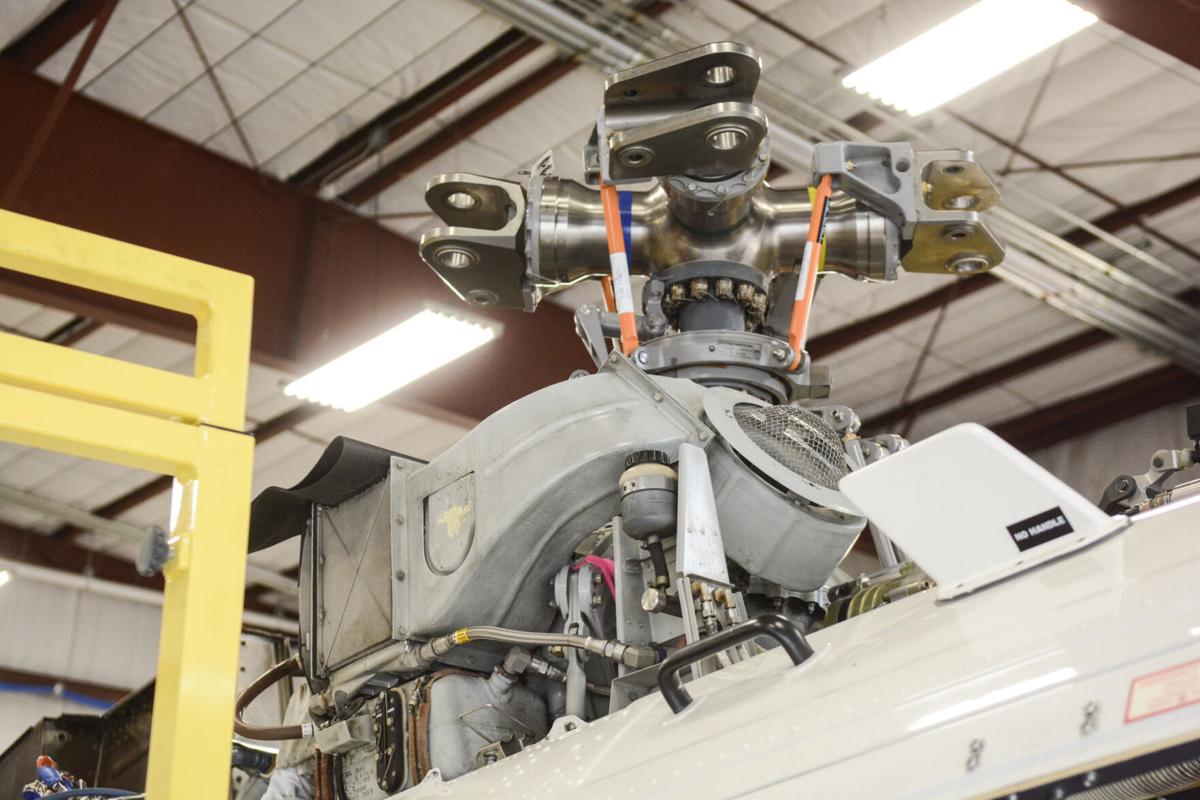 The rotor blades along with other components of a Life Flight helicopter in the hanger in Danville were removed for routine maintenance. 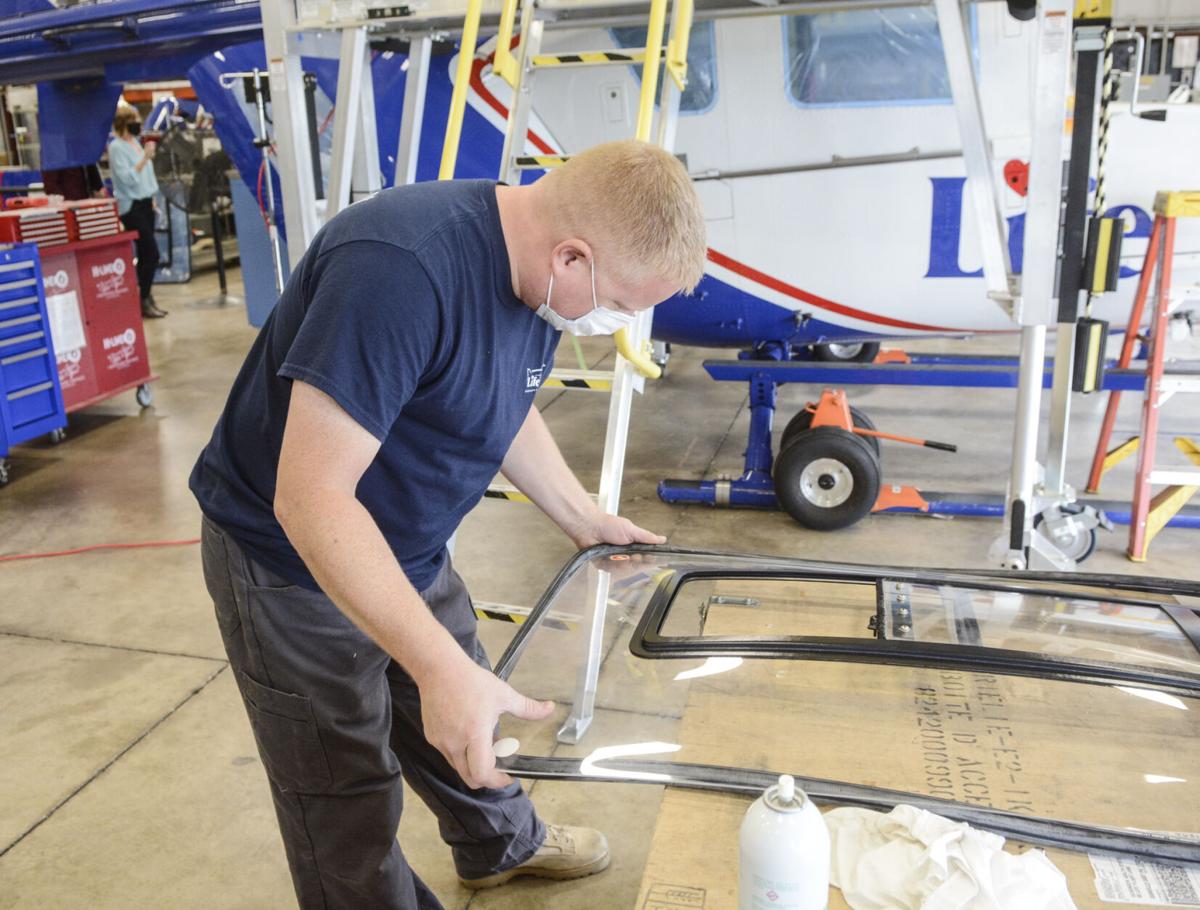 Aircraft Mechanic Derik Young works on a window of a Life Flight helicopter in the Danville hanger. 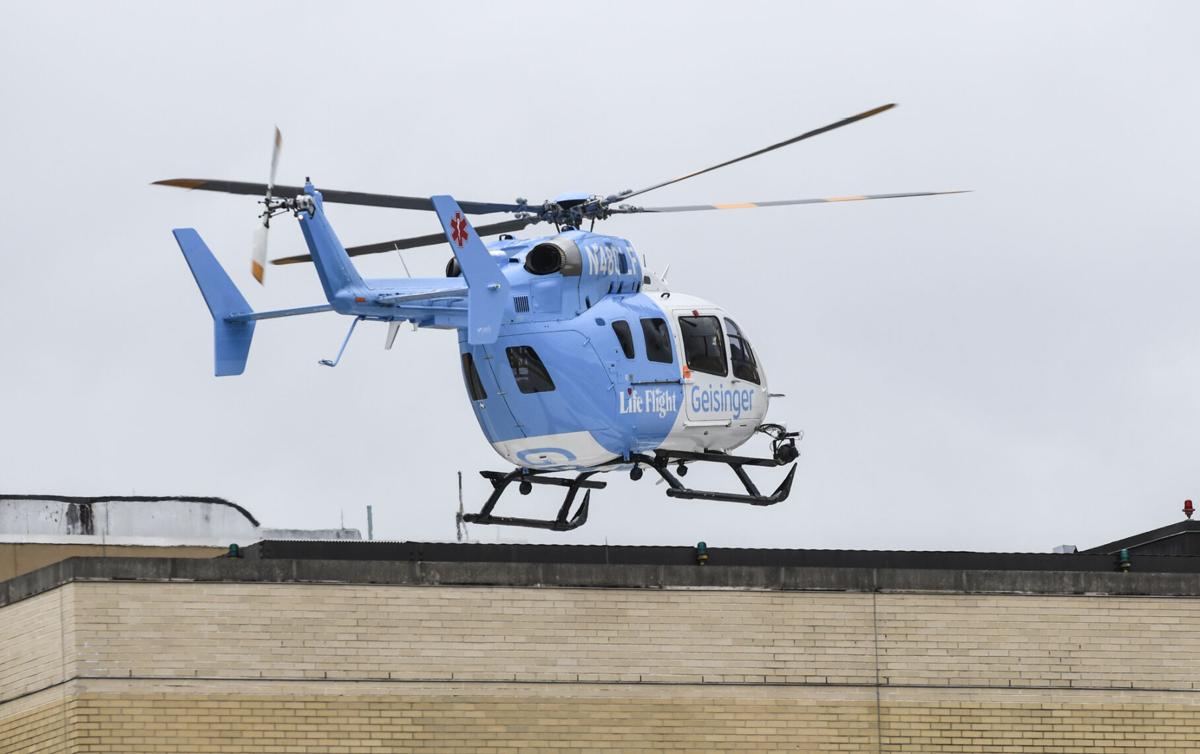 Robert Inglis/The Daily Item Life Flight comes in for a landing on the roof of Geisinger Medical Center in Danville on Tuesday. 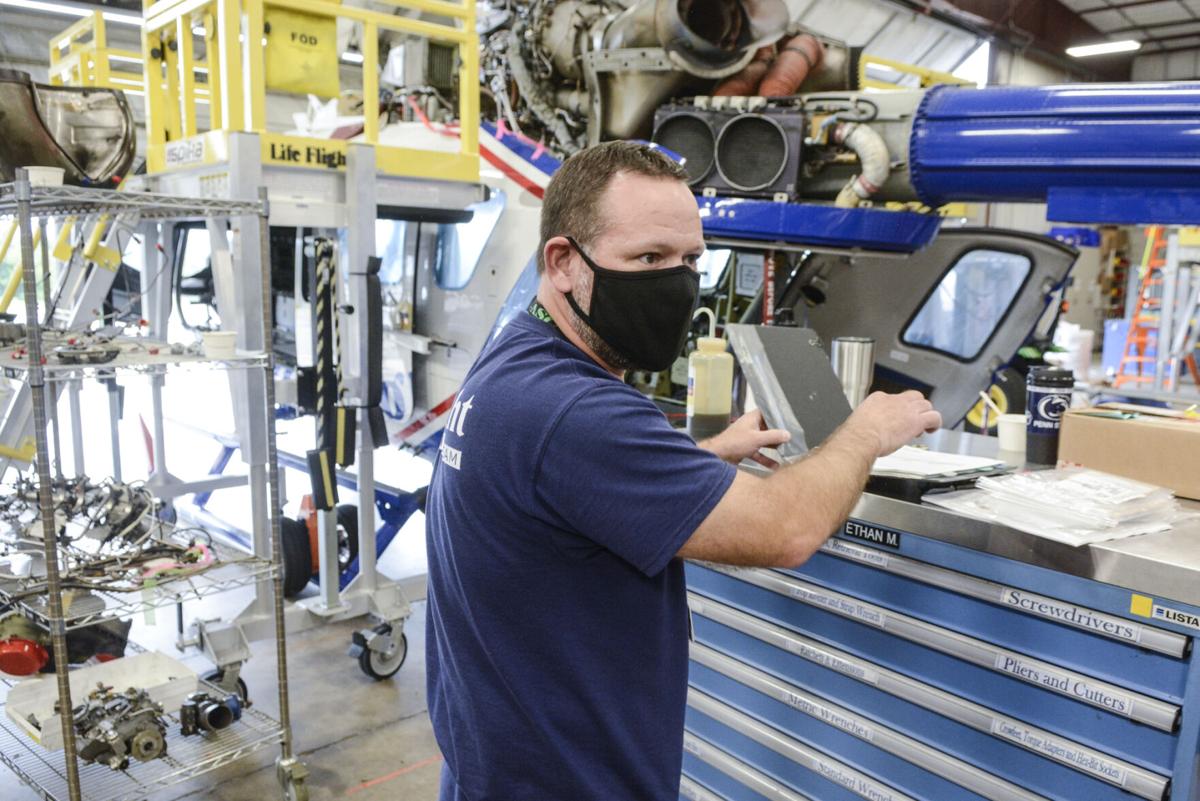 Life Flight Director of Aviation Maintenance Jeff Gazey talks about the tools they use to perform maintenance on the helicopters.

Jerry Splitt, Life Flight’s program director, has been a flight nurse since 1993 and figures “I’ve touched thousands of people. Nothing brings me more joy than seeing a patient discharged or hearing they’re improving.”

Splitt is one of about 150 members of Geisinger’s Life Flight program that got off the ground on July 1, 1981, with about a dozen employees and one leased single-engine Alouette helicopter.

At that time there were only a few air ambulance programs in the country, and Geisinger was only the second in Pennsylvania, said Dr. Michael Leicht, the program’s first medical director.

“We did 430 (transports) the first year,” he said, of the program’s mission of getting trauma and severely ailing patients rapidly to hospitals where they can receive life-saving treatment.

Today, Life Flight is the second-largest critical care transport operation in Pennsylvania after STAT MedEvac in Allegheny County. Life Flight averages 3,600 transports every year with nine twin-engine aircraft at six locations. About 70 percent of the transports involve moving patients to a different hospital and 30 percent are emergency calls.

Since 2012, Geisinger has owned all of the aircraft and employs the pilots, essentially running its own airline with oversight by the Federal Aviation Administration, said Andrea Wary, associate vice president for medicine.

“We are extremely proud of Geisinger Life Flight’s safety record through these past 40 years,” Geisinger spokesman Marc Stempka said.

There have been only two incidents involving the aircraft since the program’s inception. One in 1996 that resulted in the crew sustaining minor injuries, and the other in 2013 with no one being injured.

“Our team continues working diligently to run a safe program that has served tens of thousands of patients and their families in our community,” Stempka said.

In the past year, there has been a significant increase in flights, which Splitt attributes in part to the pandemic and delays in people seeking medical attention and becoming sicker.

Each Life Flight helicopter takes off with a pilot, flight nurse and flight paramedic, but equally important to the success of the program is the many people behind the scenes, from communications specialists, emergency vehicle operators, maintenance and administrative staff.

Richard Smith went from flying Blackhawk helicopters during Desert Storm to transporting dignitaries out of the Pentagon in Washington, D.C., and since 2012, he has served as director of Life Flight Operations, overseeing 30 pilots working at six bases throughout the Geisinger Health System.

“My job really is to follow all the rules that the FAA puts out,” Smith said.

Keeping the helicopters in good working order and safe for the patients, medical staff and pilots is the responsibility of Jeff Gazey, aircraft maintenance director, and Tim Ozimok, safety manager.

Each aircraft is inspected daily and an intensive, six- to eight-week inspection is done every 800 flight hours or three years, Gazey said.

Key in keeping everyone safe is good communication among all the department and air ambulance employees and sticking to strict protocols, said Ozimok.

“There are so many disciplines we are talking with one another 24 hours a day,” he said.

With the number of flights climbing, Gazey said, the nine mechanics are “busier than ever.”

Musing on the program’s 40th anniversary, Wary describes Life Flight as a natural progression of Geisinger founder Abigail Geisinger’s vision in the early 1900s to make sure all rural Valley residents had access to high-quality health care.

“Fast forward to 1981 and that same vision ensuring people in Pennsylvania have access to medical treatment continued,” she said.

Geisinger continues to invest in the Life Flight program, adding a new EC-145 helicopter its fleet, constructing a new helipad at Geisinger Jersey Shore Hospital and expanding the air medical program in a partnership with St. Luke’s University Health Network.

In 2015, critical care ground trucks were added “for patients who need critical care hands but don’t need the speed,” Splitt said. In 2019, every LifeFlight helicopter began carrying blood on board each flight in the event an emergency blood transfusion is needed.

The hospital also offers an emergency medicine residency program which has given nearly 300 residents a chance to work with the Life Flight crew as part of their education.

Leicht, an emergency medicine physician, went on several flights himself in the early years of the Life Flight program and recalls one accident near Elysburg with multiple people injured and one entrapment.

“We felt that one person had to go right away, so I stayed until the second one was freed and was able to treat them there at the scene,” he said.

“Incalculable,” is how Leicht sums up the benefit of the program. “We clearly have made a huge impact on lives.”

Life Flight Timeline and By the Numbers