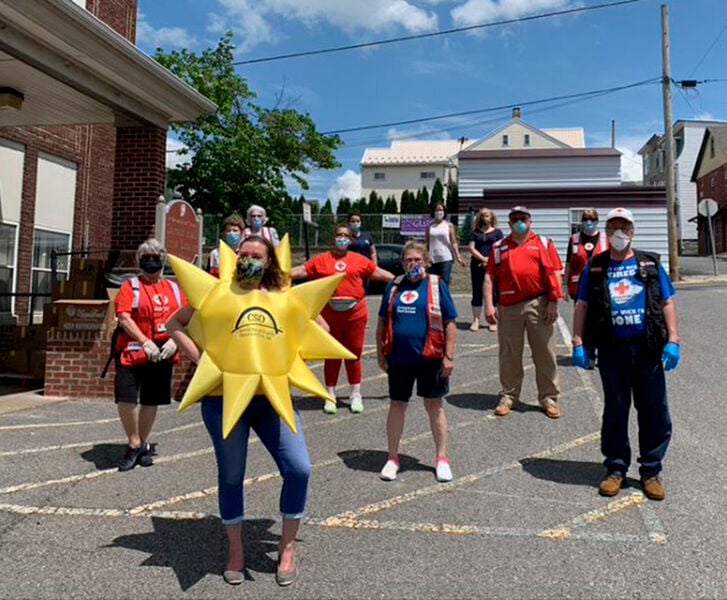 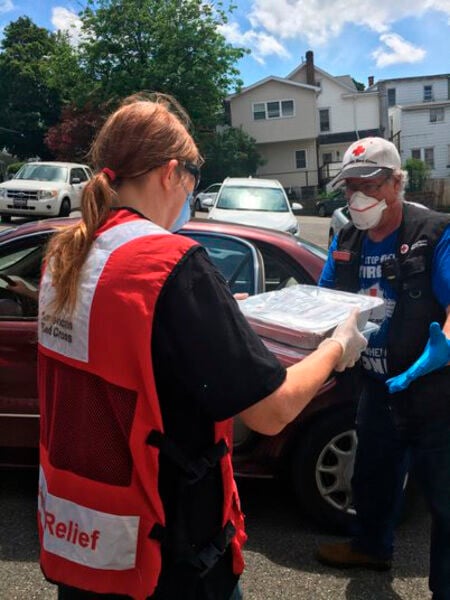 Over the past 39 years that Edna Reinard has been involved with the American Red Cross, some tragedies to which she has offered aid have left a lasting impression on her mind and heart.

One of those was the response to Hurricane Katrina in 2005. Reinard, now serving as Disaster Program Specialist for Union, Snyder, Northumberland, Montour and Columbia counties, was involved in preparing local volunteers for deployment to that hard-hit disaster area.

She doesn’t have to think too far back, though, to share another challenge that has been especially impactful. In fact, it’s ongoing.

The arrival of the COVID-19 virus and its corresponding protocols “has totally changed the way we’re doing things, but not what we’re doing. Our services are all continuing…We simply have had to look at a different way of doing them.”

According to Peter Brown, executive director of the Pennsylvania Rivers Chapter of the American Red Cross, which covers the central Susquehanna Valley, said in Union, Snyder, Northumberland and Montour counties, 3,530 units of blood were collected from the start of the fiscal year on July 1, 2020 to the end of February 2021.

With the volume picking back up in recent weeks, the organization is tracking its typical collection numbers fairly well, but it has admittedly been a challenge. They continue to be in constant need of blood donations to keep the blood banks full for when emergencies arise.

Since many businesses have closed due to COVID, most of the drives have been held at Red Cross locations. In addition, they have had to schedule fewer appointments and space the tables to meet social distancing requirements. They also now use a standalone temperature check device at the drives to screen donors. Donors are also checked for COVID antibodies, which can show if they have already been exposed to the virus.

Brown is proud to report that no transmission of COVID stemming from these blood drives has ever been reported in Pennsylvania, and he said he is very thankful to their blood collection teams and volunteers who “really stepped up and have done a wonderful job.”

He encourages people to donate, ensuring that the process and environment remain safe to do so, and reminding that the demand for blood continues to be high.

It’s the day-in, day-out donors, then, who are the heroes, Reinard said.

“It’s the blood that’s on the shelf that’s going to save a life," she said. "If something serious happens, that isn’t the time for everybody to rush in and give blood. It’s needed immediately.”

The American Red Cross partners with hospitals to provide this life-saving resource. According to the Red Cross website, the organization developed its first nationwide civilian blood program in the 1940s and continues to provide more than 40 percent of the blood products in the U.S.

According to Renee Hartmann, Administrative Director of Laboratory Services at Evangelical Community Hospital, the Red Cross supplies the hospital with blood that is utilized for surgical procedures, in-patients with active bleeding, and outpatient transfusions.

Even during all of the challenges of the pandemic, Hartmann said the Red Cross “has been consistently able to supply the hospital’s blood bank with the products it needs in a timely fashion.”

Evangelical Community Hospital and its laboratory strongly support the organization's blood drives, both hosted on the hospital campus as well as those held throughout the area’s communities, because, as Hartmann states, “we see the role these donations play in the care of our patients.”

During the COVID-19 pandemic, the Red Cross played a critical role in supplying hospitals with convalescent plasma that has been used to treat the virus.

Brown explains that this particular collection involves a lengthy process that can’t be completed at a traditional blood drive. However, the Red Cross offers several donation sites throughout the state, including at its Wilkes-Barre and Johnstown facilities.

In the central Susquehanna Valley, house fires are the No. 1 disaster that Red Cross staff and volunteers respond to each year. From July 1 to Feb. 28, the organization responded to 21 of them in the four-county region and provided direct assistance to 40 clients. Brown said the outreach was all done by volunteers connecting with the affected families.

Traditionally this work has been done through in-person meetings, providing emotional support as well as casework to meet immediate needs. But COVID again required the Red Cross to modify its outreach methods. Brown said they have been able to do much of their casework over the phone and through Zoom calls. They have conducted “drop deliveries” for needed supplies and provided financial assistance through debit cards.

Though it has become more complicated and required a learning curve as they switched to utilizing more technology, Brown said volunteers also stepped up in this regard, completing all necessary training for increased usage of online tools.

While flooding is a frequent challenge in the region, there thankfully haven’t been any recent flooding tragedies. However, nationally last year there was a great need for disaster response. Brown said it was a “record-setting hurricane season”, and many volunteers from the local chapter were deployed to those disaster areas as well as in response to wildfires in California. While some traveled to serve as boots on the ground, many volunteers were able to work remotely, meeting the needs of affected individuals through the use of virtual tools.

Because of COVID, the American Red Cross also had to change the way they provided shelter needs. Nationally, in 2020 the Red Cross provided 1.4 million shelter stays, the largest number in its history. In major disasters during a normal year, 1,500 people might be given shelter in a large arena, but COVID precautions meant finding smaller venues like hotels and disbursing volunteers to each of those locations.

“For our volunteers, it’s all about being flexible, adapting to the resources they can access,” Brown said. The past year has been difficult for those volunteers who long to meet the emotional needs of hurting families, such as offering hugs and handing stuffed animals to children. And even though it’s not ideal, virtual methods have allowed them to at least make a connection.

The Red Cross’s preparedness programming has also been affected this year. with much of that programming provided for children and youth and designed to be delivered in classrooms, the Red Cross made some adaptations and were able to deliver programming virtually over the summer months.

According to Brown, the Red Cross continues to work with the Department of Defense to provide support to military members and their families. For example, if a soldier is stationed overseas or on a base at the time of a family emergency, the Red Cross can help to bring the soldier home and can provide casework support to the family. In the four-county region so far this fiscal year, Brown said the Red Cross has handled 64 cases for local military families, and provided more than 100 different services. They can also provide referrals to other agencies, such as for financial and funeral assistance, through local and regional volunteers.

The Red Cross often works in partnership with other organizations seeking to help people in need. As Reinard explains, “We can do immediate emergency assistance, and continue to work with recovery services, but we also do a lot of referral services to other agencies already in place.”

This is true, especially for non-disaster-related needs.

However, the Red Cross can receive what is termed an “approved mission” for unique needs as they arise in communities. For instance, volunteers have been busy helping out with local food distributions. Each week at the Middlecreek Area Community Center in Beaver Springs, Red Cross volunteers help to load food into people’s vehicles. They do the same at a food distribution at Central Susquehanna Opportunities in Shamokin.

The local chapter has also received approval to help out at COVID vaccination sites, serving with paperwork, traffic control, and even helping with the vaccinations themselves.

Adapting to needs as they come has always been part of the Red Cross’s operations. This past year has certainly pushed them even further in that regard. But in many ways, making these adaptations has set them up for future success.

“As an organization, our technological savvy from volunteers through paid staff has improved significantly,” Brown said.

Even though virtual solutions weren’t always ideal, they plan to take what they have learned and apply it to their operations moving forward.

“You can’t eliminate the personal touch,” Brown said. “Getting with people in the same space is always going to be a part of who we are. But we learned a lot about how to leverage technology to be more cost-effective.”

Though involved with the Red Cross for many years as a volunteer and board member, Brown only a year ago began his duties as the local chapter’s executive director. The chapter was created as part of a state-wide realignment of the Red Cross to improve efficiency. Chapter offices are located in Allentown, Reading and Lewisburg.

He hasn’t been able to meet with his teams in-person as much as he would like, but he has been able to stay connected via virtual meetings. In addition, he has seen major benefits in the virtual platform when it comes to connecting with other non-profits throughout the region. Many of them have joined in greater ways than ever before to meet the needs present in their communities. For rural areas like the central Susquehanna Valley, such partnerships are especially important.

“In rural communities, you don’t have the luxury of thinking that one of the other 100 people in the meeting will take care of it,” Brown said. “You have to be a lot more willing to step up. I see that with the other nonprofits we work with, along with Red Cross volunteers – everybody knows they have a stake in making their communities safe and that people are ok.”

The Red Cross is also known for its CPR and First Aid training. Like the blood drives, this critical training – especially for many first responders and educators – have continued to be held throughout the time of COVID shutdowns. Brown said they had to change some of the criteria and create smaller class sizes, “but we felt it was really important that the training continue.”

Thankfully, as more and more businesses open and reduce restrictions, blood drives and the first aid training offerings are continuing to increase.

And while some volunteers with their own COVID concerns did step down for a time, now that things are starting to look up, Brown said they are seeing “an uptick with new volunteers”. Many of those, he said, have been challenged to offer their assistance based on the needs they saw during the pandemic.

The Red Cross is also starting to reengage more with school districts and families to offer preparedness training for things such as evacuation plans and planning for and preventing disasters due to winter storms, flooding and home fires.

In September, Brown said the local chapter is planning a special 9/11 memorial event in partnership with the United Way and Susquehanna ARC. They plan to work alongside local fire departments to implement fire safety measures in the Shamokin and Mount Carmel areas.

Red Cross: A history of service

The American Red Cross was founded on May 21, 1881, by Clara Barton, making this year the or…