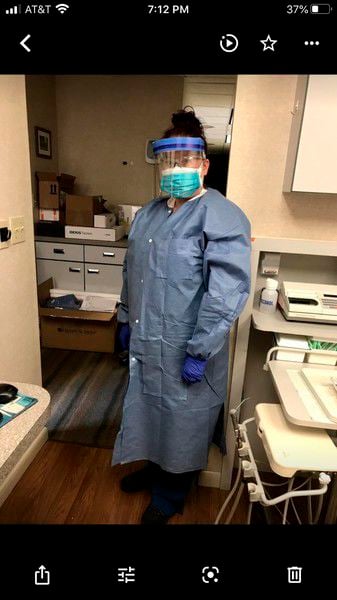 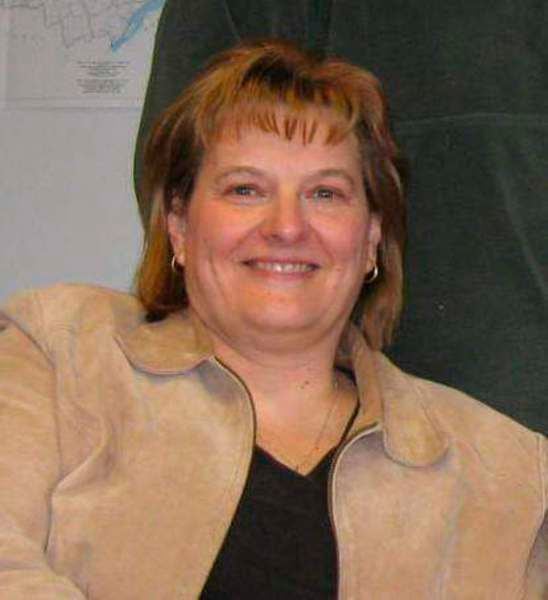 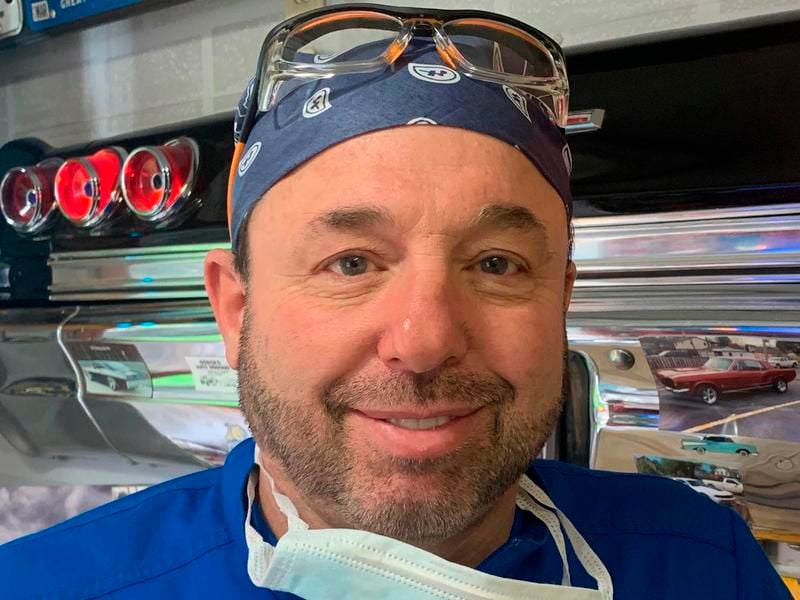 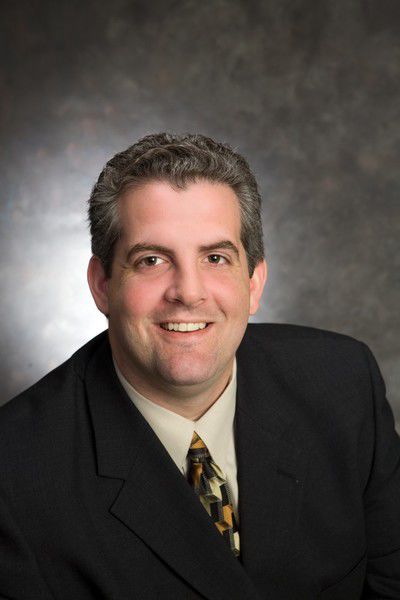 Beginning in February, Middleburg resident Renee Swineford sought dental care for the placement of two crowns. In mid-March, as the technician was putting in the second one, it broke.

Subsequently, the crown was sent for repair, back to a lab in California, where coronavirus shutdowns were already in full force. Unable to get a permanent crown, Swineford was fitted for a temporary one; the first one broke a couple of days later, and a second one lasted two weeks before it broke, too. By that point, the entire country was shut down, and Swineford couldn’t even secure an emergency appointment because supplies could not be ordered.

She waited, with pain and discomfort, for four weeks.

“Drinking and eating anything hot or cold is impossible,” she said. The dentist advised that she keep the tooth clean, but she said it was very painful to brush an exposed tooth. “I found baking soda does not hurt as much as toothpaste,” she said.

When she finally did secure an appointment for a complete repair last week, she was told not to come if she had any signs of illness, and she was given advance instructions. “I was told to call the dental office when I arrive in the parking lot,” she said. Once they were sure no one else was exiting the doorway, they would notify her of when to enter the rear of the building.

As Gov. Tom Wolf announced that counties in the Valley would move into the “yellow” phase last week, dental offices — which had previously only been admitting extreme emergency cases over the shutdown — began to open up and accept more patients. Some, who have had to wait a long time with their discomfort, now scramble for limited open spots. And when they do secure one, they’re going to find the offices, and check-in protocols, operating much differently than before.

Dr. Paul Romano, of Lewisburg Family Dental Practice, said of the virus, “When we first started seeing it in the news, like everybody else I didn’t think it would affect us the way that it did. As things got closer, I started to realize the reality of it.” When it was recommended that dental offices closed, he said the shutdown happened “basically overnight. It was kind of a surprise.”

Furloughs were necessary, and unknowns swept in.

“Dentists were affected really hard with this,” Romano said. “Like restaurants – but we don’t really have takeout options.”

“It was almost like a wave you could see coming,” added Dr. Ralph Cianflone, a Northumberland dentist. “We heard about things at the beginning of March. I stayed open. Then we heard some more things.” On Friday the 13th, they had appointments scheduled for the following week; but by Wednesday, he told his employees that they would see a few patients in the morning, “and that’s going to be it.” They were to cancel the rest. And then he placed a note on his door: “Closed until further notice.”

While initially, his office closed completely and was instructed by the Department of Health to not even see emergency cases, Romano said the Pennsylvania Dental Association fought back, saying such closures were unreasonable, and that people with dental pain would only overwhelm the emergency rooms further, where they wouldn’t be able to get proper treatment anyway.

A week later, he said dentists were approved to start treating “painful emergencies only”.

“We were provided all appropriate personal protective equipment, including face shields, N95 masks and gowns,” she said. “All CDC guidelines and American Dental Association guidelines were followed. We also have HEPA filtration in place at all times.”

As of May 8, dentists in the “yellow” zones of Pennsylvania are opening up to more patients, but must continue to follow guidelines, even though they “are still a little ambiguous,” Romano admitted.

While the dental association continues to seek and provide more clarity from day-to-day, dentists are cautiously moving forward.

Roush said as of Monday (May 18), her office was expected to be open for routine dental checkups and cleanings. “Strict protocol will be followed,” she said, “such as longer appointment times and limited patients in the office.”

For Cianflone, keeping his patients safe meant clearing out all of the pictures and magazines. He also repainted the walls and at first, he took out all but one chair of his very small waiting area.

As they experimented with a “soft opening” last week, he said, they instructed patients to remain in their cars and wait for a text to notify them when it was time to come in. They would be provided with a mask before entering.

“A few patients would exit the office through the back door,” he said. “We had traffic control. “

Cianflone used to give matchbox cars to kids to play with as they waited.

“I think those days are over,” he said.

They continue to stagger patients to ensure that minimal people are in the building at one time. He is also taking fewer patients each day, allowing him time to wipe down the waiting room and doorknobs – something he does every hour. He also has patients sign a consent form before being treated.

Romano said he also decluttered his office, removing magazines and toys from the waiting room, and reducing chairs to three, each six feet apart. He also replaced the cloth chairs with plastic ones they can easily wipe down.

Lewisburg resident Nathan Condon was one of Romano’s first patients when he reopened last week. Condon said when he arrived, everyone was in masks, no one else was in the waiting area, and plexiglass separated him from the receptionist. They asked him the same questions they had asked him on the phone – such as whether he or anyone in his house had a cough or fever in the last 14 days. Then they checked his temperature.

Condon had developed a toothache just as shutdowns were announced throughout the state.

“It was pretty bad,” he said. “But there was nothing I could do about it at the time.”

Thankfully, the pain subsided somewhat, until a week ago Sunday afternoon, when it became “excruciating”, he said. He does not have a regular dentist, so on Monday, he called Romano’s office, since it was in town. He explained his situation. They couldn’t promise they would be allowed to treat it if infected; however, they might be able to do an x-ray.

“Luckily, because there weren’t a whole lot of people calling at that second, they were able to get me in that day,” he said.

And thankfully, they were able to extract the tooth and give Condon the relief he had been hoping for.

“I’m missing one tooth, but other than that I’m great,” he laughed.

During the shutdowns, Cianflone said he could only treat emergencies with minimal, temporary care, such as a band-aid or antibiotics instead of a tooth extraction.

It was important to them to continue offering treatment to these individuals, she said, because “Dental emergencies are potentially life-threatening and require immediate treatment.” Each patient was fully screened and any health concerns were evaluated. They followed social distancing protocol and only allowed one patient in the office at a time.

Thankfully, because of the nature of their work, dentist operatories are already very sterile. Cianflone said they continue to clean and disinfect these areas, and he continues his normal precautions such as wearing gloves and masks (now changing them more often) and has added surgeon’s headgear.

“My operatories have almost nothing in them,” added Romano. However, procedures must be handled carefully, and they are not allowed to do anything that would result in an aerosol (such as drilling a tooth) – “Theoretically, the virus can travel on that and fill the room,” he explained.

Cianflone said the use of a tool called a cavitron during cleanings also causes a spray to be released into the air.

As they cautiously ease back into booking more appointments, Romano said he is glad to finally be able to help his patients who were in the middle of treatments — such as the crowning of a tooth — when his office was forced to shut down. He hopes to serve many more in the coming months.

But no one knows what the future holds.

“It’s literally day-to-day,” Cianflone said. “We don’t know what instructions we’re going to get from the governor — or from the American or Pennsylvania dental associations.”