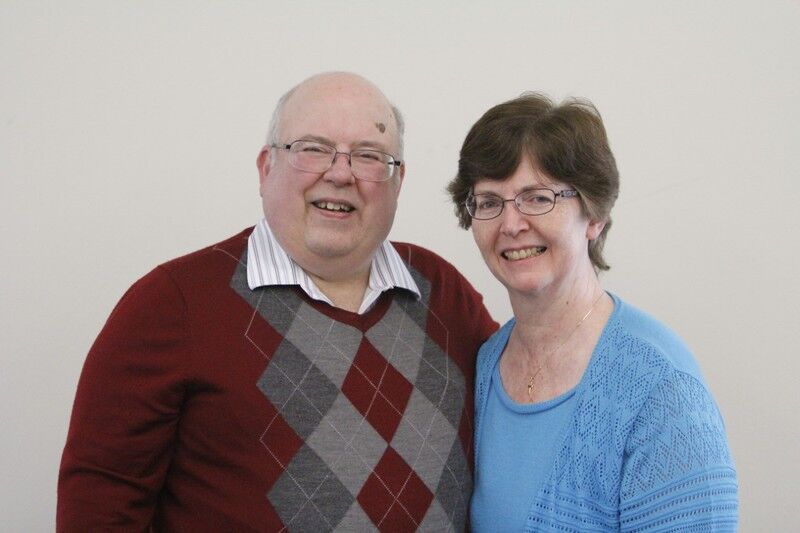 Gail Rohland, right, who lives with Parkinson's disease, poses with her husband Ray. 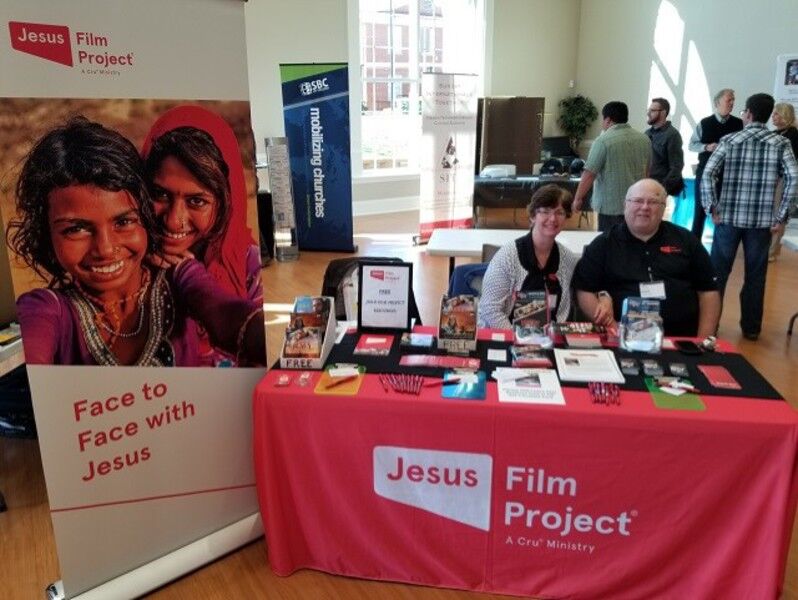 Gail Rohland, left, of Selinsgrove, sits with her husband Ray as part of their missions work with Cru Ministry. 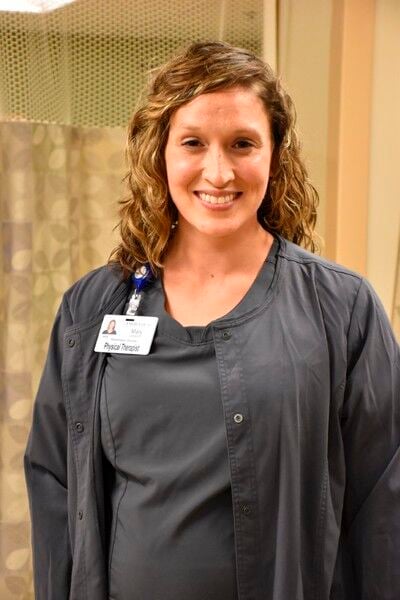 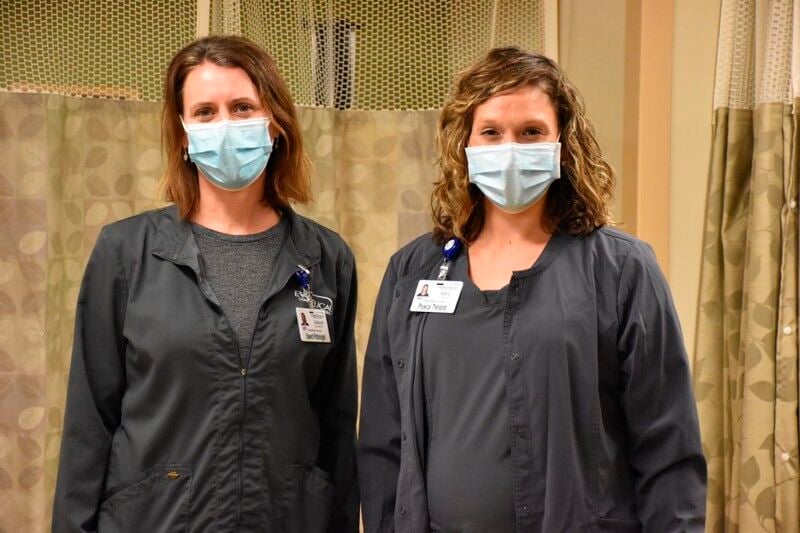 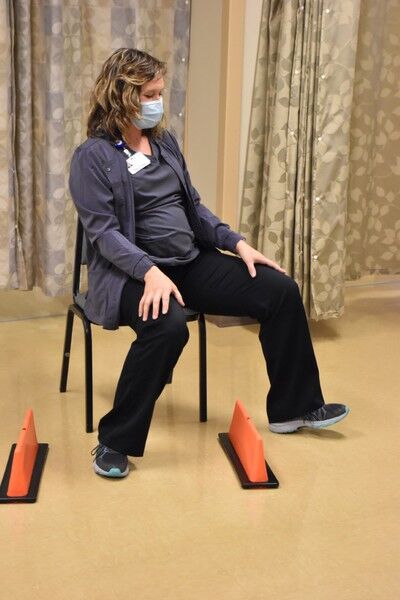 Mary Gorham, doctor of physical therapy at Evangelical Community Hospital, demonstrates the type of movement activity she would do with a Parkinson’s patient to concentrate on making their movements bigger. 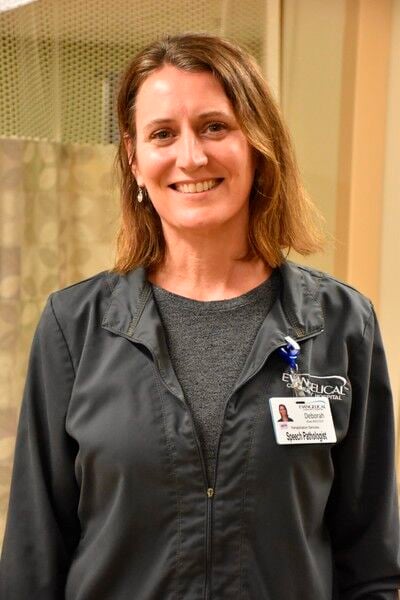 Gail Rohland, right, who lives with Parkinson's disease, poses with her husband Ray.

Gail Rohland, left, of Selinsgrove, sits with her husband Ray as part of their missions work with Cru Ministry.

Mary Gorham, doctor of physical therapy at Evangelical Community Hospital, demonstrates the type of movement activity she would do with a Parkinson’s patient to concentrate on making their movements bigger.

Nine years ago, Selinsgrove resident Gail Rohland was serving in Egypt with a missions organization, when she put out her hand for a taxi and it began to shake uncontrollably. She and her husband Ray had been serving in the country for 24 years and had haled plenty of taxis. So it wasn’t because she was nervous.

She saw a doctor and was given numerous blood tests. She tested negative for every sort of nervous disorder capable of being detected. If nothing shows up, she explained, doctors deduce that you have Parkinson’s disease.

“I didn’t know what Parkinson’s was,” she said, “so I went home and started looking it up.”

Then she was introduced to a gentleman at her church who was dealing with a very advanced stage.

“He was sitting there, hunched over. He couldn’t talk loud, you had to get close. He was shaking constantly.”

The vision scared her, but she found solace in her husband and children’s assurance that they would love her no matter what.

During a summer furlough, they traveled for a month and then returned to the United States. The tremors continued, but Rohland had no pain. She was given some medication that allowed her and her husband to return to Egypt to finish up a six-month commitment and then settle in the states full-time. Thankfully, that had been their plan all along, so the disease didn’t require them to change their course.

“Little by little, various doctors have added medicines that kept me pretty stable,” Gail, now 60, said. She describes the symptoms as “more of an annoyance than anything”.

“There are times I can’t write,” she said, and she often has to ask for assistance. “People look at you strange.”

In addition, because Parkinson’s affects her facial muscles, she has trouble smiling for pictures and is often mistaken for being upset when she’s not.

“You kind of swallow your pride sometimes,” Rohland said.

The classic symptoms of Parkinson’s Disease are slowness, stiffness and tremors at rest, explained Dr. Mihai Sandulescu, a neurologist at Geisinger.

Generally, the cause is believed to be the dying of dopamine-producing nerve cells at the brain stem.

“It depends on each patient how fast it may progress or not,” Sandulescu said, but some studies show it is a fast-growing neurological condition, most common in older individuals. Most individuals with Parkinson’s will first seek help from a doctor around their 60s and 70s.

Sandulescu said the disease is also more present in men than women, but not by a huge margin. Some studies propose that estrogen could possibly be a protection against the disease, but nothing is definitive. Some factors such as constipation, anxiety, depression, diabetes, along with a family history of Parkinson’s, may increase the risk of someone developing Parkinson’s.

Sandulescu describes the disease as “a progressive disorder that usually starts many years before someone will show up in the clinic.”

According to Mary Gorham, doctor of physical therapy at Evangelical, individuals may have symptoms of the disease for five to 10 years before they seek professional help. If a person just has slight tremors, they might simply attribute it to old age, but as the disease progresses, a more definitive diagnosis can be made.

The same is true for the effects the disease has on speech and swallowing. According to Deb Rowe, speech-language pathologist at Evangelical, individuals with Parkinson’s may cough when eating or drinking and experience the sensation of food getting stuck when they swallow.

Many people with Parkinson’s have a shuffling gate, hunched posture, quiet speech and have a tendency to lose their balance, Gorham said.

According to Ariel Muhs, a speech therapist for UPMC Williamsport, Parkinson’s “can affect the muscles in the face, mouth and throat that are used in speaking and swallowing. A lot of times they will have a soft, vocal quality ... and they may think they’re talking loudly enough and they’re not.”

Rowe added that they may be less able to control the rate of speech, their intonation may become more monotone, and their facial expressions more limited. The disease can also affect their memory and ability to problem-solve.

Meghan Sandonato, an occupational therapist at UPMC Williamsport, said many times, these patients perceive their movements to be large when in fact they are the opposite.

“Everything just gets very small,” she said, “their walking, their hand movements. They shuffle a lot more, have an increased risk for falls, their balance is impacted, and there are sensory deficits as well. Any movements that they have that are normal to everybody else are interpreted by them as being too big.”

Some successful treatments focus on “retraining the brain” Sandonato said.

While there is currently no cure for Parkinson’s, there are plenty of options to fight it.

“Studies have shown that with the appropriate exercise and treatment, you can actually slow the progression of Parkinson’s Disease,” Gorham said. In addition to medications that can help the neurotransmitter that produces dopamine to work better, there are proven therapies. One well-known program is called LSVT Big and Loud, focusing on physical and speech therapy respectively. It’s been a go-to therapy for around 25 years.

Gorham describes it as “a strict protocol-driven therapy program that covers counteracting the slow and small movements that most people with Parkinson’s Disease present with.”

“I have treated quite a few people with this program,” Gorham said, “and it was amazing to see the big change in that short period of time, how these people were better able to move and function, even in the small things in their life.”

Vocal volume is targeted during the speech therapy portion of the program, Rowe said, adding that it has been shown to not only improve communication but also facial expressions, intonations and intelligibility of one’s speech.

The commitment is intense, but Gorham said the purpose of it is to “recalibrate” the patient.

“With repetition and focus on bigness and loudness, it almost retrains the brain to put that intense effort into everything they do, without having to think about it as much. It fosters normal movement.”

PWR UP (Parkinson’s Wellness Recovery) is another form of this treatment, simply a pared-down version for those advanced cases who may not be able to do the more rigorous program. Here, therapists can customize the therapy according to a patient’s symptoms and what they can tolerate.

Having an occupational therapist involved at the UPMC Big and Loud program is also beneficial to patients who are struggling with the everyday effects of the disease. Sandonato said it’s often the “daily activities that we take for granted” that Parkinson’s Disease patients struggle with the most.

“They just want to be able to button their shirt, to feed themselves,” she said. They can work with doctors to provide practical help such as adaptive feeding equipment utensils.

While it’s best to work with a certified therapist, Sandulescu said evidence has shown that even regular exercise three to four times a week, for 30-40 minutes daily, can help slow the progression of Parkinson’s. “The best exercise is the exercise that you do,” he said. “I want you to enjoy what you do, whether it’s swimming, bicycling or walking. As long as you sweat.”

Sometimes, medications are necessary, especially for those who can’t exercise and have trouble doing activities such as typing, eating or clothing themselves.

However, the truth remains that the prognosis is different for each individual, depending on their symptoms and the severity of them. But for those patients who are willing to try the treatment that is out there, there is a good chance that help can be found as the medical community searches for a cure.

“This is not the end,” Sandulescu encourages. “There is a huge hope right now.”

Through therapy, Gorham has watched patients improve their walking speed, moving from a slow shuffle to taking bigger steps and swinging their arms to encourage that normal walking pattern. Her patients have experienced fewer falls, improved balance, and often find they are once again able to get out of a chair without help.

“For some people these changes are huge and lifechanging,” she said. “For others, it’s just small – but enough.”

Sandonato said she is happy that this program, and others, are available to Parkinson’s patients.

“There’s a ton of research going on now,” she said. “There’s no cure, but there are definitely things that we’re finding that help."

Muhs also finds hope in increased awareness, fundraising and research through programs such as LSVT and the Michael J. Fox Foundation.

In the meantime, Rowe said the key is for people to get help the sooner the better, as therapy is less effective if the disease progresses to the later stages where cognition issues increase and dementia may set in.

Sandulescu agrees. If someone is experiencing symptoms, with a few weeks or months, he said, “They should look for a specialized opinion …There may be treatments early on that may benefit you in the long run.”

One day at a time

Along with medication, Rohland has found that by getting exercise and staying active, she has been able to slow the progression of the disease. She connected with a local exercise class targeted specifically for those with Parkinson’s, working against the attacks it makes on dexterity and balance, for example.

“It really made a difference in a lot of people’s lives,” she said, “because they’re doing things they couldn’t do before.”

She continues to work full-time and regularly sees her neurologist for monitoring of symptoms and medications. “I take a lot of pills,” she said. Some are four times a day, some three times, some two times, and one one time, so it requires her to pay attention. She hopes they can be consolidated at her next visit.

In the meantime, she stays positive about the future.

“I’m hopeful they’ll continue to find new things to help us along the stages,” she said, adding that as a Christian, she believes she has “a tremendous advantage with these issues, trials and struggles.” She aims to be an encouragement to others, she said, and has learned “to make the most of the opportunities God gives you, even if it’s not where you want to be.”

She has even found a blessing in the midst of the disease.

“Spending time with the Lord is the best part of it,” she said. “God’s individual care is amazing.”

She encourages those struggling with Parkinson’s to find others to talk to – “people who understand”, she said. And to find an exercise class to join or simply work out on your own for a half hour.