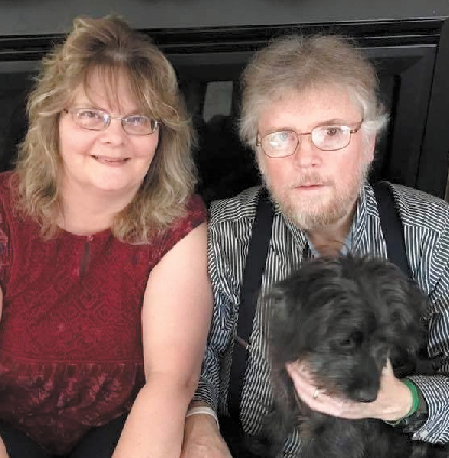 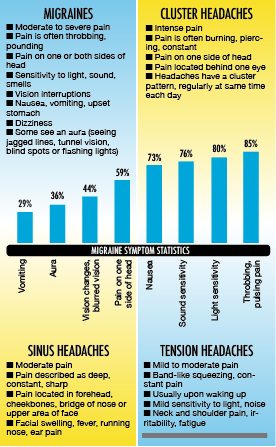 A sharp, throbbing pain greets Ann Dorman, of Sunbury, as she wakes, starting in the front, right side of her head and soon branching out to the back of her head and down her neck.

The morning light aggravates the pain, and every sound is amplified into an unbearable orchestra of pain.

She puts a pillow over her head to block out the light and sound and begins to sob.

“Dealing with a migraine can be very hard,” she said. “Some people don’t realize just how debilitating they can be. You get to the point where you just want to give up from all the pain, but you know you need to just get through it.”

Dorman has dealt with migraines for 19 years, trying to find trends and early warning signs when possible to avoid them getting too bad.

“Many of mine come from being too hot. I need fans on at night,” she said. “I am sure there are more reasons for them, but that is one I have really noticed.”

She used to feel them coming on and had been able to get medication — including a nasal spray and sometimes shots from the doctor’s office — to ward off the worst of the symptoms.

However, she has noticed more early morning migraines that come in the night while she is sleeping.

“There are a number of differences between common headaches and a true migraine — which is a neurologic disorder,” said Dr. Adrienne McCallister, of UPMC Susquehanna. “Migraines can be much more severe. You get to a point where you have to lie down, close all the blinds and withdraw from all the sensory stimuli you can.”

According to McCallister, tension headaches tend to be more bilateral, while migraines typically form on one side of the head or another.

“There are additional associated symptoms, such as experiencing a sense of aura in your sight and other visual changes that come before a migraine, such as flashing lights or a blindspot that isn’t normal,” she said. “If a migraine becomes really severe, it can be scary. They can mimic a seizure or a stroke, including numbness in parts of your body and weakness in the facial region.”

According to Dr. Sana Ghafoor, of Geisinger, migraines are a fairly common condition.

“Thirty-six million people in America suffer from migraines. Out of all headache conditions, 20 percent involve females who are dealing with a migraine vs. nine percent of men with migraines,” she said. “Because of the prevalence for women vs. men, being female is a risk factor for migraines. Unfortunately, too many times, they are misdiagnosed as dental-based pain or a sinus headache.”

Over the past couple years, there has been a shift in what medical professionals feel cause migraines, according to McCallister.

“The past thought was that it was related to blood vessels in the brain, but now the thinking is that they are more closely tied to serotonin, which coordinates signals in the brain,” she said. “We are identifying more genes that can be connected to migraines and why there is a tendency for them to run in certain families. We also have found that some are connected to neck issues and that can be a trigger for migraines.”

Other triggers can include emotional stress, certain foods and specific types of sounds or other stimuli.

“If you notice that eating cheese or drinking wine leads to more migraines over time, than obviously you want to remove or at least reduce those triggers,” said Ghafoor. “Those dealing with stressful situations in life should do what they can to cut back the stressors. Consider calming techniques such as exercise, yoga or massage.”

Ghafoor admitted that some of her patients have utilized acupuncture and certain supplements to help prevent migraines.

“Out of all the supplements, I find magnesium to be the most effective and well-studied,” she said.

Beyond magnesium, McCallister recommended Omega 3 fatty acids and riboflavin (B complex vitamins. She added that dehydration can be another trigger for migraines, as can getting enough regular sleep.

“I’ve known some patients who are switched to a night shift or have some other disruption to their normal sleep schedule who have developed migraines,” she said.

Regardless if your headache is a migraine or not, there are certain red flags that McCallister recommends seeking immediate medical attention.

“If you are experiencing the worst headache of your life, it might be good to see a doctor. If it comes abruptly, called a thunderclap, instead of building up, it can be a sign of a lot of things, such as meningitis,” she said. “If you are having a seizure, experience changes in vision, numbness or other symptoms that one associates with a seizure or a stroke, it is best not to take chances.”

Also, she added, if you are age 50 or over and never really had headaches but then suddenly start experiencing them, it could be a sign that there are growths or other things that could be concerning.

“If you are pregnant and experience an extreme headache, it is best to get to a doctor for a diagnostic workup,” said Ghafoor. “If you are immune-compromised with a history of HIV or diseases such as hepatitis, then a headache should be taken more seriously, as well.”

For those trying to support a friend or loved one with migraines, it is important to take the symptoms seriously, Ghafoor added.

“I’ve seen this lack of empathy for those dealing with migraines and severe headaches that is concerning. If someone has their arm chopped off, people see it and empathize. But with headaches, where there isn’t an objective marker, there can be some stigma,” she said. “Sometimes, when patients with severe head pain go to the emergency department, it can quickly be mislabeled as an ordinary headache or that the person is seeking drugs. It is important to be more empathetic.”

“I know some people who just think it is just another headache,” she said. “But until you go through it, you have no idea what someone goes through with one.”