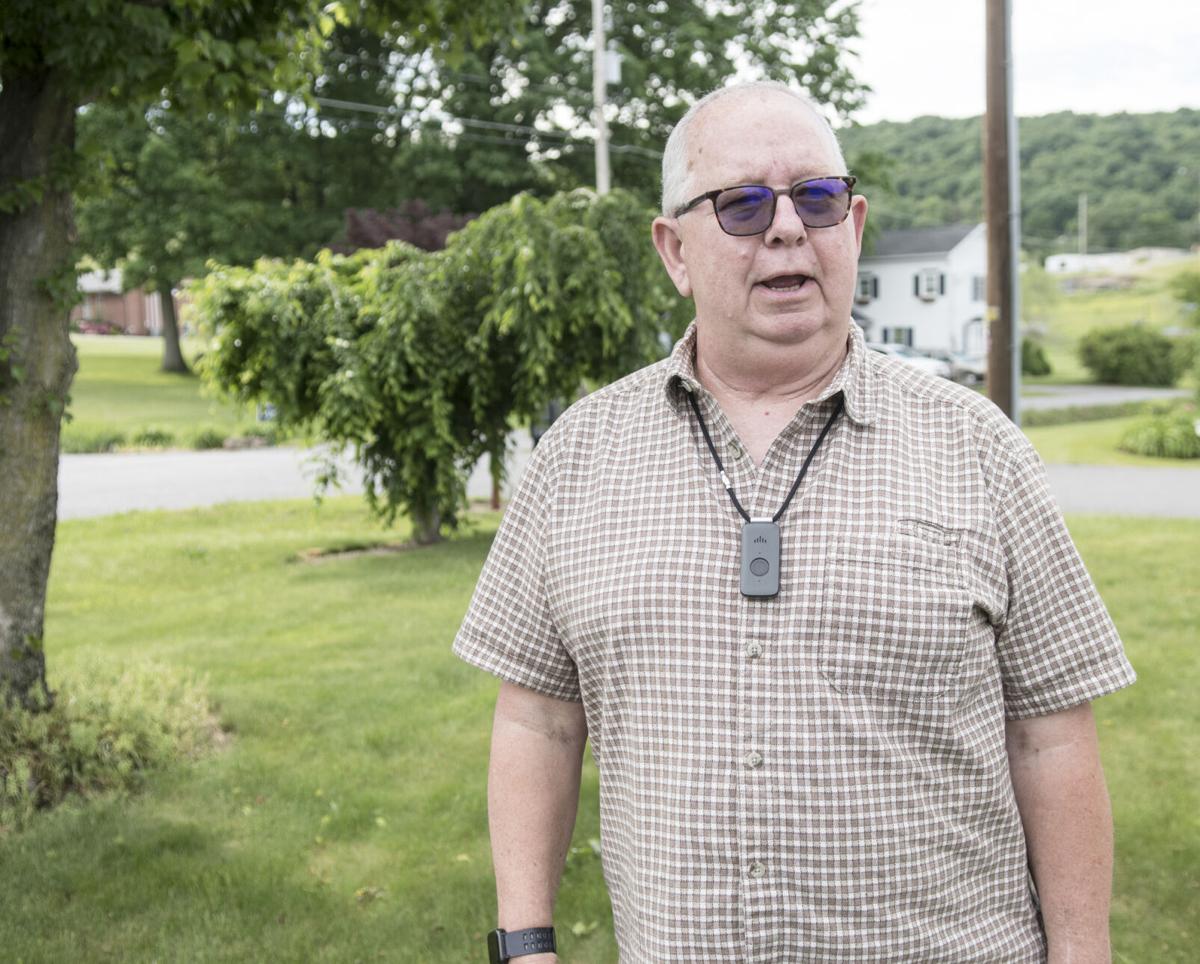 Penns Creek resident Brian Bechtold talks about some of the exercise he does in his recovery from a stroke. 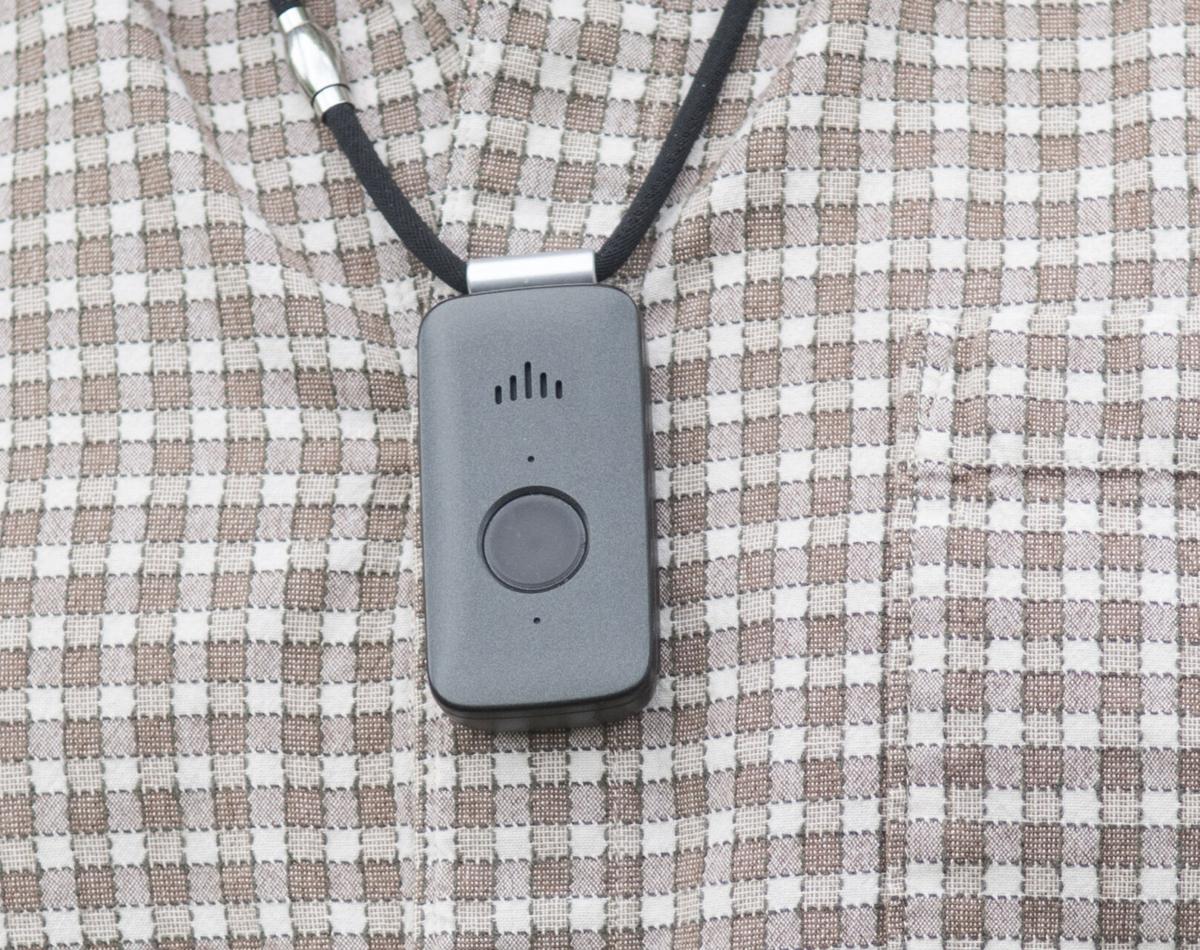 Brian Bechtold wears a medical alarm around his neck since having a stroke.

Penns Creek resident Brian Bechtold talks about some of the exercise he does in his recovery from a stroke.

Brian Bechtold wears a medical alarm around his neck since having a stroke.

PENNS CREEK — The road to recovering from a stroke can be a hard one, but proper rehabilitation and work can make it a little easier.

Brian Bechtold had no idea when he woke up the morning of Dec. 11, 2020, that he would not wake up in his own bed again until May of this year.

Bechtold, who is 67 and lives alone, was diagnosed with COVID-19 in early December. His symptoms seemed to worsen that morning as he got up from his recliner to get a glass of water.

“My left leg gave way,” he said, and he fell to the floor. Bechtold managed to reach his cell phone and dial 911.

As a patient at Evangelical Community Hospital, he was told he had had a stroke.

After two weeks in ICU due to COVID-19, Bechtold was sent to the hospital’s in-patient rehabilitation unit to receive therapy for his stroke recovery.

He remained within the in-patient unit until January 28. He then temporarily moved to Allentown with his sister and her husband where he completed outpatient therapy and returned to his Penns Creek home May 3.

However, if not for the in-patient stroke recovery program, Bechtold is not so sure he would be doing as well as he is today.

“They were fantastic,” he said. “They worked with me twice a day and I got stronger gradually.”

When he started the program he would walk with a walker while aided by a physical therapist and an intern. “I couldn’t lift my left leg at all,” Bechtold said. But the intern would manually lift it for him. They did this every day, until one day in January Bechtold felt he was ready to walk for a third time during the day.

That day Bechtold lifted his leg on his own. This was a huge moment for him.

“They did an absolutely excellent job,” he said of his care.

“When a patient is admitted with a stroke to the hospital, we get an automatic referral,” Taylor said. The in-patient rehab unit is located on the third floor of the hospital and is not only for stroke patients.

“We take a look at their home situation and insurance coverage,” Taylor said, to see if the patient is a good fit for the in-patient program.

Therapists take a close look at the patient’s needs and severity of the stroke. They determine how the patient is able to handle occupational issues, speech and so forth.

“We ask ‘Are they medically stable? Are they able to have therapy at an intensive level such as three hours a day? Is the patient willing to do it?’” Taylor said.

If a patient is adequately able to care for himself and to be mobile in his own home, he will likely be recommended for outpatient therapy.

Taylor pointed out determining the patient’s needs goes beyond mobility.

“We look at the severity of the stroke and it’s location. They may have trouble with speech or swallowing or visual deficits.”

Therapy is provided for all of these issues.

“A stroke creates a spectrum of needs that could potentially be addressed.”

The in-patient program with Geisinger is both on campus in Danville and in other locations.

As a doctor referring patients to such a program, he said the type of stroke could be one of two: ischemic or hemorrhagic.

Ischemic strokes are most common and happen when there is a blockage in an artery of the brain. The hemorrhagic happens when the artery bleeds into the brain.

The rehab is tailored to meet the potential of each patient’s scenario, he said.

“The idea here is to find out what is the correctly collaborated approach to recovery,” Schirmer said, “It’s about right sizing to the right patient. What may do the trick for one may not be right for everyone. We do what we can to make that recovery better and faster.”

Another factor examined is the other medical issues the patient may have — either as a result of the stroke or prior to the stroke, Schirmer said. These medical issues may include diabetes, high blood pressure, trouble swallowing, pneumonia or deep vein thrombosis.

For Bechtel, COVID-19 played a factor. Doctors believe the virus caused his stroke, he said.

Taylor said there is no data currently showing how many strokes in the past year were caused by the virus.

Bechtel said he had no other medical issues or family history.

“This came out of nowhere,” he said.

Most stroke patients stay in the program seven to 28 days, based on their needs, Taylor said.

Taylor said the program has come a long way over the past 10 years and offers more opportunities for patients.

Taylor said Evangelical’s program offers a motor vehicle preparedness test on site. “It gives a better idea if the patient should get behind the wheel again,” Taylor said.

Schirmer said he expects to see new technology continue to play a role in in-patient programs. He noted there may one day be devices such as robotic braces to make therapy progress more efficiently.

In Bechtel’s case, his therapy was a perfect fit for his situation. He had concerns about his insurance coverage. Taylor said insurance companies have done better in recent years to work with providers for in-patient needs following a stroke.

“There were several times he didn’t think he could get back home,” Taylor said, “But we had a plan.”

“I still limp and my left arm is weak, but I’m getting there,” Bechtel said.

Bechtel is enjoying warmer weather by walking every day. He lifts weights to help regain strength in his left arm, he said.