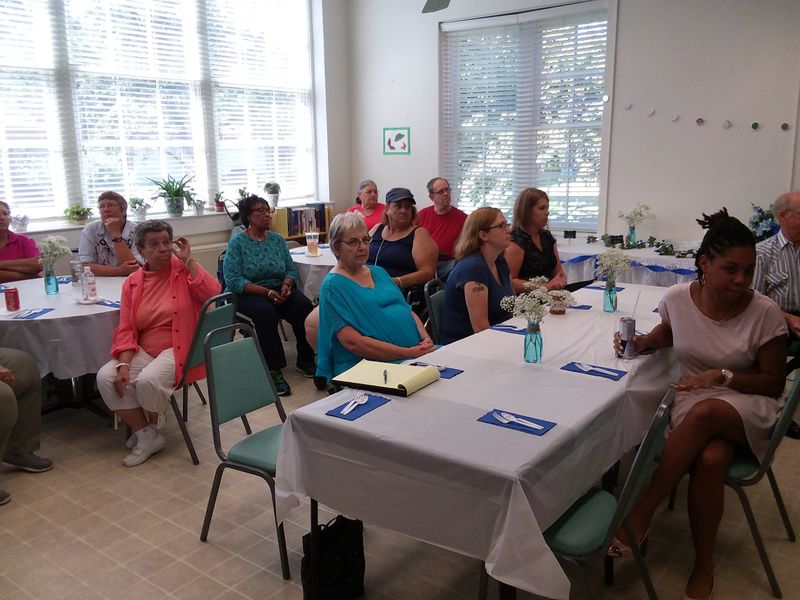 The Lewisburg Senior Center chose to host their first-ever wedding on a regular senior center day, giving the seniors the opportunity to join in as guests. 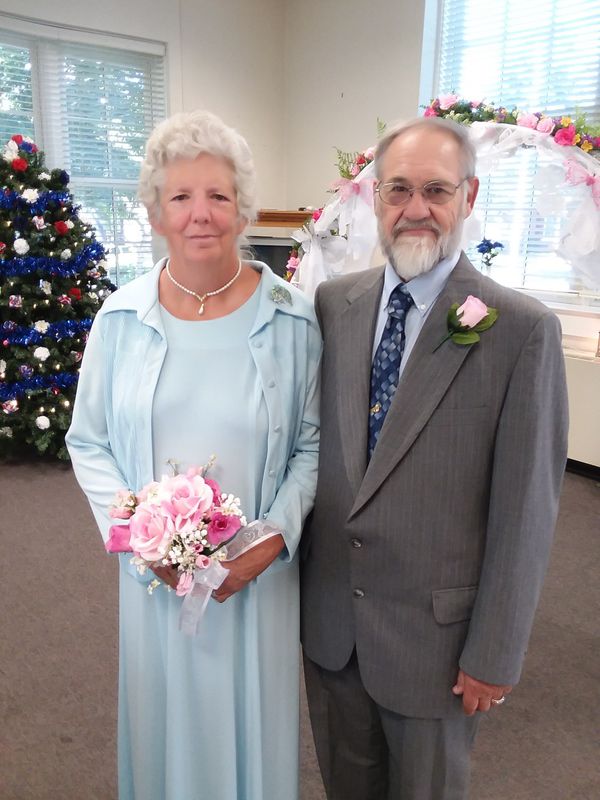 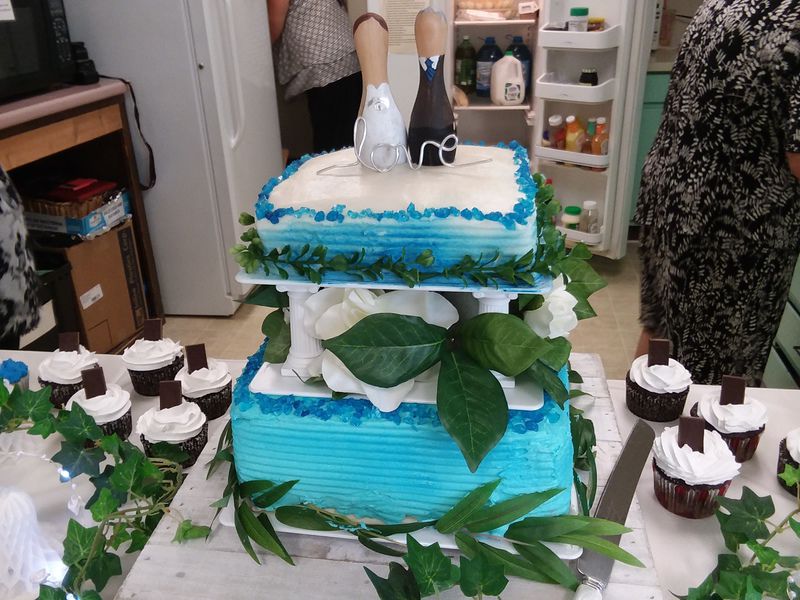 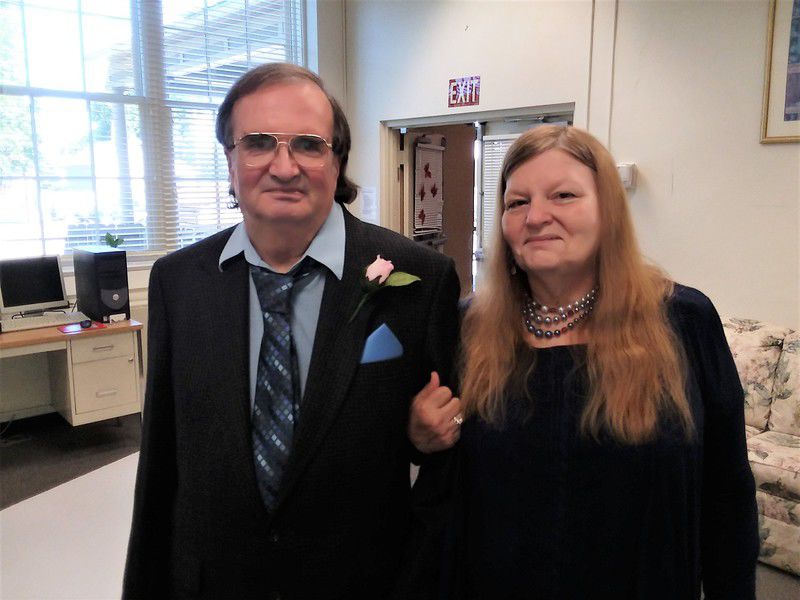 Friends Fay and William Klapp, Milton, stood as maid-of-honor and best man for the wedding of Sandra Johnson and David Kapp, Mazeppa. 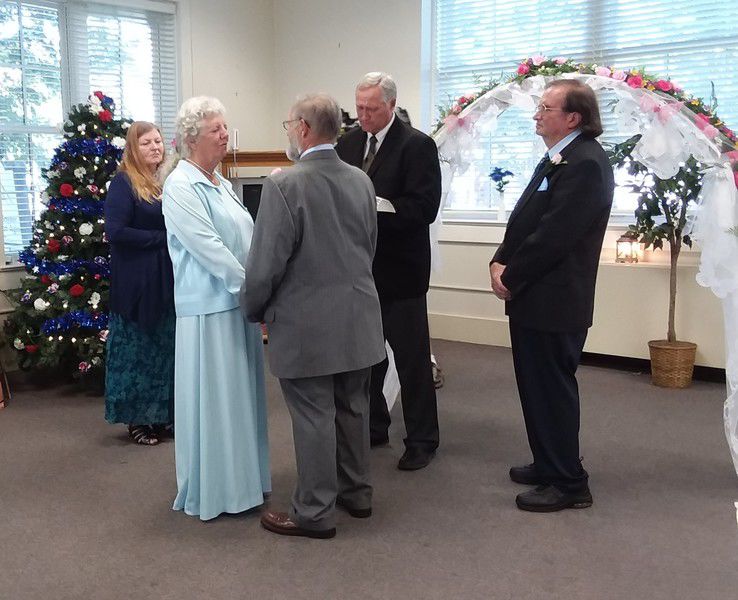 Sandra Johnson and David Kapp look into each other’s eyes as they pronounce their wedding vows at the Lewisburg Senior Center.

The Lewisburg Senior Center chose to host their first-ever wedding on a regular senior center day, giving the seniors the opportunity to join in as guests.

Friends Fay and William Klapp, Milton, stood as maid-of-honor and best man for the wedding of Sandra Johnson and David Kapp, Mazeppa.

Sandra Johnson and David Kapp look into each other’s eyes as they pronounce their wedding vows at the Lewisburg Senior Center.

LEWISBURG – Award-winning radio producer and reporter Connie Goldman wrote in an article in secondjourney.org, “A colleague once told me that those of us in the winter of our lives can still find summer.”

David Kapp, 69, found “summer” with his bride, Sandra Johnson, 66. With friends and family gathered around, they married each other July 19 at the Lewisburg Senior Center.

The two met online while David was living in South Carolina, about a year after Sandra’s husband died from lung cancer.

“I didn’t think I’d find anybody that would work even for a friendship,” Sandra said. “I asked the Lord to send me the right one. That’s when we got together, and we decided we liked each other.”

After David moved back to Pennsylvania, the two continued their relationship mostly by phone.

“You kind of get to know somebody pretty good after you talk to them on the phone every day for six months,” Sandra said.

Asked if he was nervous while he waited for Sandra to walk down the aisle, David replied, “I’m 69 years old. I’m not nervous.” Then added with a laugh, “Not yet, anyway.”

Retired from Conagra and the United States Navy, he said he and Sandra have a love for animals and each owns a horse. They will live in Mazeppa.

“He had a good marriage the first time, and then his wife passed on,” said William Klapp, Milton, who worked with David at Conagra. The two were best men at each other’s weddings. “His second marriage was not good. This one looks like it’ll be a good marriage. I wish them all the best and many, many years after this day.”

Klapp’s wife, Fay, agreed. She stood in as maid-of-honor for Sandra.

“I’ve known Dave for quite some time. I think she is a wonderful person. I think she’s perfect for Dave,” Fay Klapp said. “She seems like a sweetheart.”

Nancy Yost, the manager at the senior center, suggested David and Sandra marry there instead of going to a justice of the peace.

They chose to host the nuptials on a regular senior center day, giving the seniors the opportunity to join in as guests.

Wayne Krell, pastor of the Mifflinburg Church of the Nazarene, has officiated at some unusual wedding spots, but never before at a senior center.

With Debbie Krell playing “Here Comes The Bride,” Sandra entered the room escorted by her son, Daniel Johnson. She joined David and stood before the minister in a light blue, floor-length suit holding a bouquet of pink roses and with a pink rose holding back her hair.

Rachel Goss sang “Amazing Grace,” and Pastor Krell talked about the power of love and God’s desire for happiness for all. When David and Sandra proclaimed their vows, Sandra spoke in a soft, Southern drawl. They ended the ceremony with a somewhat lengthy kiss that drew surprised chuckles from the guests.

“I wish them years of health and happiness,” said Kay O’Neill, Lewisburg, a member of the Senior Center.

“We got a little treat today,” said Cathy Rank, Assessment Department for the Senior Center. “We’ve been so excited ever since we heard about it. It’s just always exciting to go to a wedding.”

When David and Sandra were asked what they were feeling right after the ceremony, Sandra looked at her new husband and said, “I think I’m glad the Lord sent me you.”