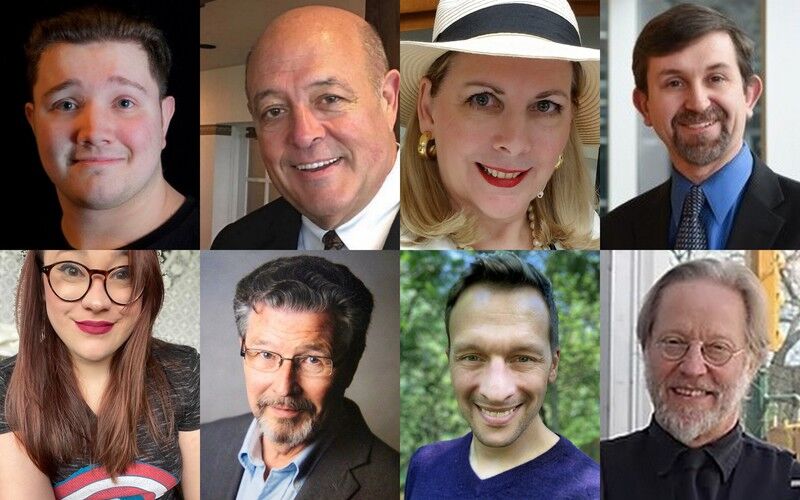 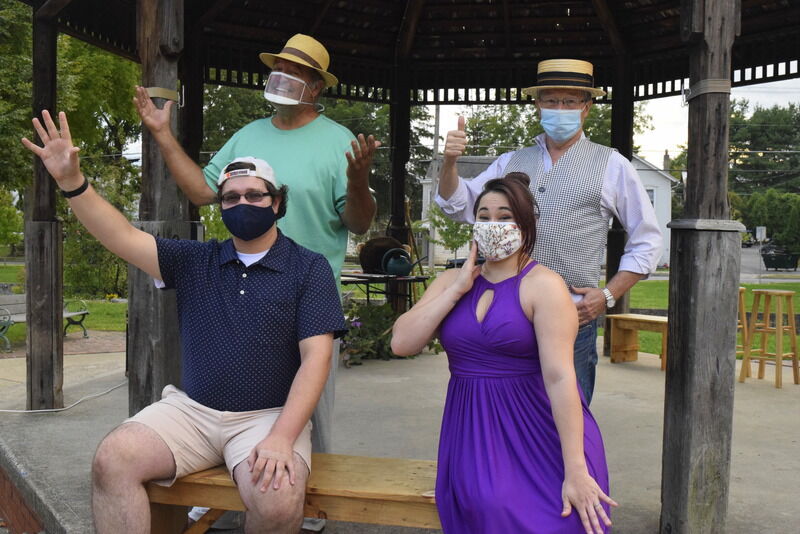 The RiverStage Community Theatre presents “The Fantasticks” on September 17, 18 and 19 at 6:30 p.m. at Hufnagle Park Gazebo, in Lewisburg. Rehearsing here are, standing, from left: Glenn Wilson as Huck and Fred Hooper as Bell. Seated: Tyler Marvin as Matt and Bryanna Kifolo as Luisa.

The RiverStage Community Theatre presents “The Fantasticks” on September 17, 18 and 19 at 6:30 p.m. at Hufnagle Park Gazebo, in Lewisburg. Rehearsing here are, standing, from left: Glenn Wilson as Huck and Fred Hooper as Bell. Seated: Tyler Marvin as Matt and Bryanna Kifolo as Luisa.

LEWISBURG — Even if it weren’t for social distancing, a local community group says they have a play perfect for an outdoor venue during a time when people can use some good laughs.

“The Fantasticks” will be performed by the RiverStage Community Theatre on Sept. 17, 18 and 19 at 6:30 p.m. each evening at the Hufnagle Park Gazebo near Fifth and Market Streets.

Admission is free and no tickets are required, but online donations are highly encouraged. Audience members will be required to wear a mask and observe social distancing rules.

Jove Graham, president of the RiverStage Community Theatre and director of the show, said this is just the thing to ease our pandemic-laden worries.

“‘The Fantasticks’ is exactly the right show because the cast is small, which allowed us to rehearse in very small groups, it doesn’t require a set, and it takes place ‘in the moonlight,’ which is perfect for outdoors,” Graham said. “I have been personally wanting to do this specific show at the Hufnagle Park gazebo ever since I laid eyes on it, and if you have never seen ‘The Fantasticks’ before you are really missing out because it is so beautiful and so funny.

“This cast volunteered to work on this show despite knowing they would have to wear masks, social distance and learn their parts with a minimum number of rehearsals, and they are so good at what they do. It’s just going to be a magical three nights in the park, and we will probably never have the reason or opportunity to do something like this ever again, so I hope people will try not to miss this chance to see it.”

With music and lyrics by Tom Jones and Harvey Schmidt, “The Fantasticks” tells the tale of a boy and a girl and the fathers who try to keep them apart in “a world of moonlight and magic.” Cast members include Bryanna Kifolo and Tyler Marvin as the young couple, and Glenn Wilson and Fred Hooper as their fathers. Elaine Pfeil and Steven Stumbris play traveling actors, while the narrator (Jove Graham) and a Mute (Trey Casimir) lead the audience through the story. It is directed by Graham, with sound design by Stefan Eisenhower, lighting design by Patrick Maynard, and other production support by Cynthia Shaffer.

“We also try to respond to the world around us in our programming decisions, and this one is all about context,” Casimir said. “In the context of a global pandemic, is love worth the hassle and is life worth living? Yes! And ‘The Fantasticks’ is all about accepting life at face value and loving it anyway.

“A product of the early ’60s, ‘The Fantasticks’ is also perfect for our outdoor, semi-theatre-in-the-round stage setting at Hufnagle Park, and the cast is fantastic, if I do say so myself. Some of us are in every play or musical that comes down the pike, and a couple of us haven’t been in a play in 40 years, but the talent, commitment and creativity are there to make this a quintessential production of ‘The Fantasticks.’ Theatre lovers will be sorry if they miss it.”

“The Fantasticks” ran Off-Broadway for more than 42 years, making it the longest-running musical in history. Seeing it at Hufnagle Park gives people an opportunity to support the local arts community, said Glenn Wilson, who plays Huck.

“The arts are vital,” he said. “You will be transported from day-to-day life. In short, it will be fantastic!”

Like most theatres, RiverStage has had no indoor performances since last winter due to COVID restrictions.

“As we head into autumn, though, and the weather makes it possible to perform outside in the open air, we thought it was the right time to try a small musical outdoors in the park,” Graham said. “We didn’t need to do this but we wanted to give something back to our community, which is why we are not selling tickets, and asking for donations instead. We want people to know that the theatre is scaled back right now, but with the right people and show, we are ‘not dead yet’ and can still creatively do something safely and responsibly.”

RiverStage has launched an online fundraising drive of approximately $3,000 at www.gofundme.com/riverstage-fantasticks.

In case of a rain cancellation, an extra matinee performance will be added on Sunday, Sept. 20, at 2 p.m.