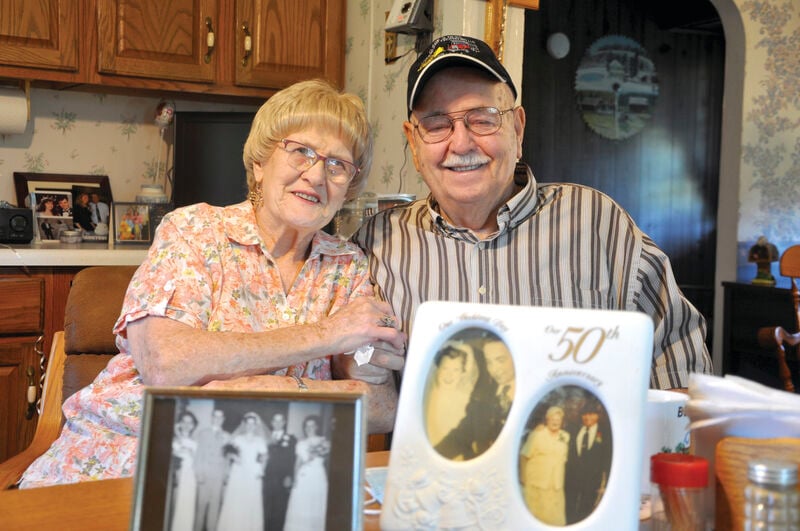 Eleanor and Bob Hess of Rush Township, who celebrated 70 years together on Veteran’s Day.  They were 17 when they met and married.  In the foreground are photos from their wedding on November 11, 1950. 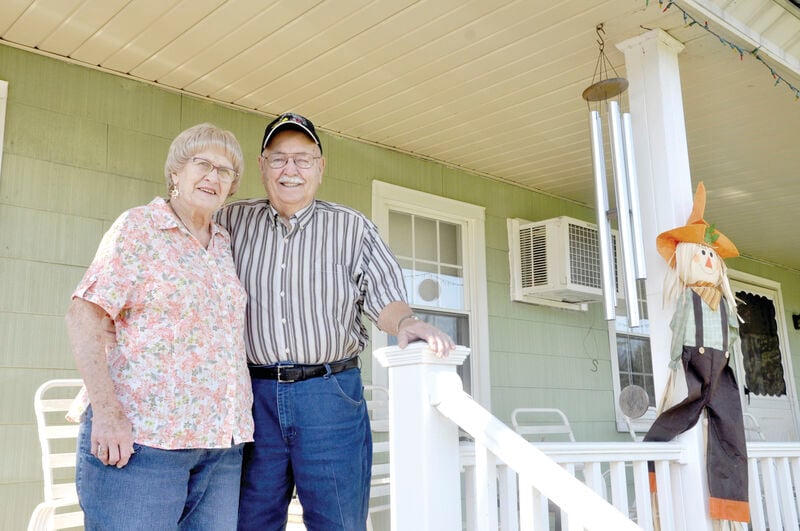 Eleanor and Bob Hess on the porch of their farmhouse in Rush Township, where they have lived for 62 years.  On Veteran’s Day, they celebrated their 70th wedding anniversary.

Eleanor and Bob Hess of Rush Township, who celebrated 70 years together on Veteran’s Day.  They were 17 when they met and married.  In the foreground are photos from their wedding on November 11, 1950.

Eleanor and Bob Hess on the porch of their farmhouse in Rush Township, where they have lived for 62 years.  On Veteran’s Day, they celebrated their 70th wedding anniversary.

Seventy years ago, on Armistice Day, November 11, 1950, Eleanor Shaffer and Robert Hess tied the knot at St. Peter’s Church in Riverside. It proved to be an auspicious beginning to seven decades of a peaceable life together, mostly on their farm in Rush Township.

“There’s always going to be disagreement,” said Eleanor, “but we’ve never stayed mad. And we always go to bed together. That’s the secret.”

It all started with a trip to the movies in Bloomsburg with her cousin when Eleanor was 17. The show was “Pinocchio,” but she was more interested in the guy sitting in front of them that night. “He’s good looking,” she whispered, and they hung around afterward to meet Bob and his brother.

Bob was 17, too, and confessed he thought she was “lovely.” On their second date, to Sunbury, they got two flat tires and had to wait for hours for help to arrive. The next day, they announced they had decided to get married.

They spent their wedding night at the Riverview Hotel, which cost $5 then. Twenty-five years later they went to Niagara Falls for a second honeymoon.

Heartache entered their lives, though, as son Randy lost the use of one arm in an accident at camp when he was a boy and son Ron was killed in a motorcycle accident at age 18. Then, just two years ago, they lost grandson Jeremy Clark in a car accident on an icy winter evening.

Most of the Hess family live close together. In fact, son Bob and his wife Mary Carol as well as daughter Angie Clark and husband Cale live right next door, on parcels of the original 80-acre farm Bob and Eleanor purchased 62 years ago. “We have a wonderful family,” said Eleanor. “Everybody visits. And when the grandkids were young, they would come here to eat before they went home for supper.”

In 2000, when they celebrated their 50th anniversary, they had a huge bash, according to daughter Angie Clark. “But we couldn’t do that this year, so we had something small. The grandkids and great-grandkids mostly stayed away for fear of spreading germs to the older folks.” Angie did make a fancy three-layer wedding cake, though, for the occasion.

After Bob and Eleanor moved to their farm in 1958, Bob intended to be a full-time farmer, and so he bought some used machinery and farmed several surrounding parcels. “But the machinery kept breaking,” he said, and so he gave that up.

He got a job at Thompson Works (later TRW) in Danville as a machinist, but when a trucking company came up for sale in 1972, he went into business for himself and founded Hess Trucking Co. His son Bob and son-in-law Cale Clark worked with him and now run the business as Clark and Hess Trucking and Excavating.

Early in their marriage, Eleanor worked briefly at Cabinet Works, but her family soon became a full-time job. She is well known for her homemade bread and for her peanut butter pie. When she first made it, Bob said, “you’ve got to put more peanut butter in,” so she did, and it has become her signature dessert.

Eleanor likes to bake in quantity for her family, and this past summer she made 42 zucchini bread to give to all her children, grandchildren, and great-grandchildren.

The couple also likes to get away, especially out west. They have traveled the country in their motor home, and Wyoming is a favorite hunting destination. They often winter in Florida and have been to Hawaii. The only place they haven’t been is Alaska.

Back in 1950, being so young and having known each other only two months, “everyone told us it won’t last,” said Eleanor. “But,” added Bob, “it was for real.”