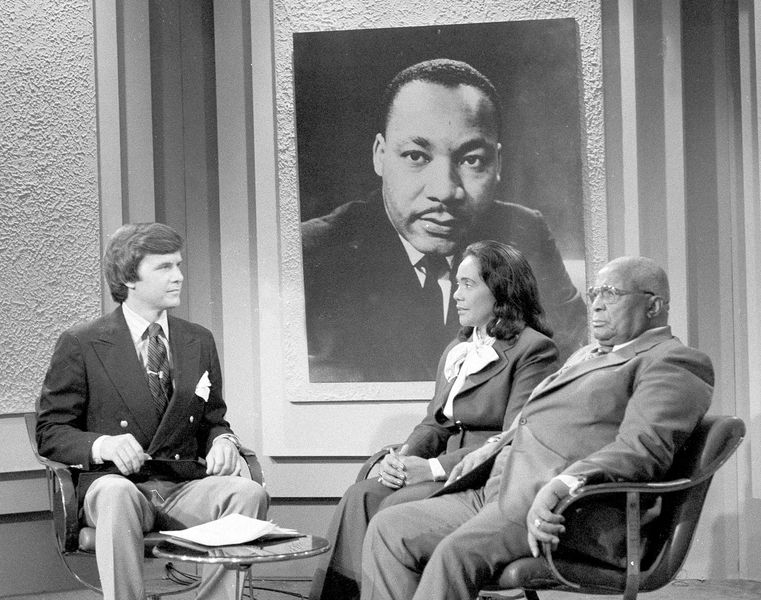 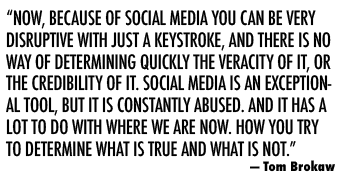 Social media is something we have now that we didn’t have in 1968, said Tom Brokaw, of NBC TV News.

“Social media is an instrument of communication that we’ve not yet caught up to,” he said. “The big issue is there is no quick way of determining factual matter. People are out there pumping out something to deliberately derail what may be in the best interest of the country or the establishment.”

In 1968, he said, you had the alternative press, like Rolling Stone magazine, and men like “Tom Hayden saying whatever came to his mind when he was at a microphone about the rebellion in America. But most families were puzzled by that because for the first time in their lives they had everything they had ever hoped for and suddenly the younger generation was turning on them.

“Now,” Brokaw said, “because of social media you can be very disruptive with just a keystroke, and there is no way of determining quickly the veracity of it, or the credibility of it. Social media is an exceptional tool, but it is constantly abused. And it has a lot to do with where we are now. How you try to determine what is true and what is not.” And the difficulty of putting things in context because there is always somebody there to disrupt that.

Social media has created this explosion of opinion and comments, said Bill Zimmerman, of Penn State University, a lecturer on communications, and a former social media manager at PSU. “And while the increased connection that journalists have with their readers can be a good thing, such as it being a source of news tips,” it can also be a vehicle for those who wish to spread lies.

“When you get comments from suspected trolls, you have to dig deep and look for the source of the comment, look at the person’s profile, and the comments they’ve made in the past,” Zimmerman said.

Brokaw, Zimmerman agreed, “has done a good job, here, in capturing the anxiety around social media.”

One good thing about the digital age, Zimmerman suggested, “is you can dig into who is making the comments and the relevance of those comments. If there is any opportunity to step in and correct misinformation, as journalists, you do so. But it could also be a lost cause and the person is just wanting to start a flame war in the comment section. It makes for a more cumbersome process and it puts more onus on the journalist to do a lot more people research to figure out what is right and what’s wrong.”

“One way or the other,” Brokaw said, “if I tweet something that is faintly favorable to Trump — like when he went to the Middle East and said, ‘if ISIS comes into your community, throw them out’ — I thought that was a good speech. The left attacked me mercilessly because I had something decent to say about Trump.

“If you have something that is critical of Trump in some fashion, or critical of the climate in which we are living then you get the opposite,” Brokaw said.

1968: The Year that changed America