Bucknell University physics and astronomy professor Ned Ladd talks about one of the telescopes he will use on his research trip to the upcoming Eclipse’s path of totality, the region of the U.S. where the moon will completely cover the sun. 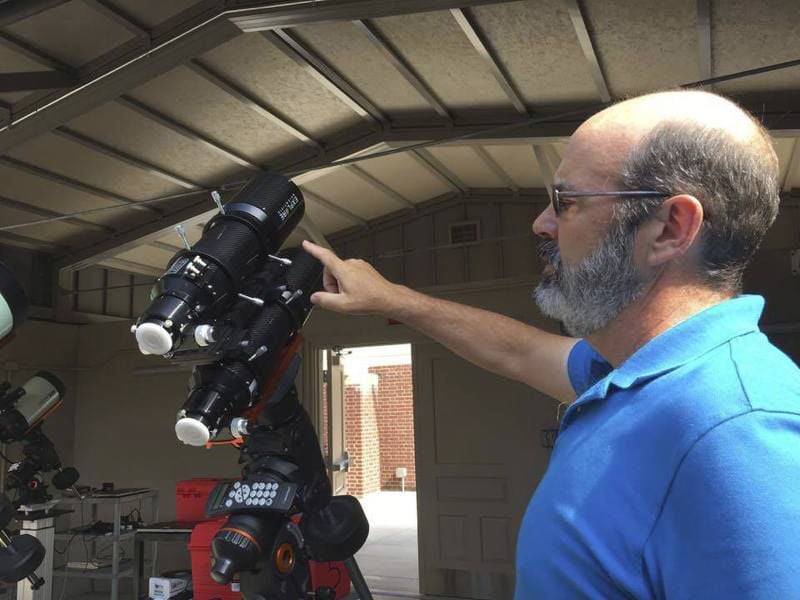 Ned Ladd, a professor of astronomy and physics at Bucknell University, will travel with students and other faculty members to the path of totality, where the moon will completely block the sun, during the Aug. 21 eclipse.

Bucknell University physics and astronomy professor Ned Ladd talks about one of the telescopes he will use on his research trip to the upcoming Eclipse’s path of totality, the region of the U.S. where the moon will completely cover the sun.

Ned Ladd, a professor of astronomy and physics at Bucknell University, will travel with students and other faculty members to the path of totality, where the moon will completely block the sun, during the Aug. 21 eclipse.

Bucknell astronomy professor Ned Ladd studied an eclipse for the first time as an undergraduate in 1984. He traveled with a research team to observe the annular eclipse, during which a thin exterior ring of the sun’s disk was left uncovered by the moon, over North Carolina and Virginia.

Thirty-three years later, Ladd is taking his own team of six undergraduate students and fellow Bucknell astronomy faculty members Deepak Iyer and Tom Solomon to study the upcoming total eclipse as it makes its way across the United States on Aug. 21.

Ladd said his team will head to the path of totality, the places along the eclipse’s path where the moon will completely cover the sun, to study the sun’s corona.

NASA scientist Noah Petro explained the corona is the upper atmosphere of the sun, which is hotter than the surface of the sun and very difficult to observe in normal solar conditions.

The corona is best studied during an eclipse when the main and brighter disk is covered, he said.

“Astronomy is already cool, but eclipse astronomy is so unusual because you have to be in the right place at the right time,” Ladd said.

Ladd’s team will go to either Tennessee or South Carolina to conduct two different experiments during the eclipse.

He said the team plans to investigate the way the corona is heated. Ladd explained one theory states the corona is charged when the interior heat raises and releases a small shock to the corona.

“We will be looking to see if the corona gets brighter and then dimmer periodically,” he said.

The other experiment will have the Bucknell team collaborate with the Williams College in Massachusetts to observe the dynamics of the corona.

Ladd said the Williams team is stationed in Oregon and will witness the eclipse approximately 90 minutes before the the Bucknell team does.

Ladd said both teams will respectively capture a full shot of the corona and then compare the pictures to measure any changes or shifts in the corona over those 90 minutes.

He is happy his students will have the chance to witness this celestial phenomena.

“It is a much more visceral experience. It is a nice combination of science and that experience,” Ladd said. “An eclipse is a clear indication that our universe is a dynamic place.”

Members of the Bucknell team aren’t the only people from the Greater Susquehanna Valley excited to adventure to the path of totality.

Lewisburg resident Joe Southerton and his whole family will travel to the Smokey Mountains in North Carolina to watch the eclipse.

He said he won’t plan on looking through a telescope or taking pictures when the eclipse is at its peak. “I just want to get caught up in the moment.”

“We’ve been talking about this for 5 years,” Southerton said. “At 60, I’ve never seen a total eclipse before. I would hate to see this without my family. As with a lot of things, astronomy is a lot more fun with family and friends.”

However, not all local astronomy lovers will make their way to the path of totality.

“I already have my eclipse glasses and a camera filter. I’m thinking about watching it from the Shikellamy State Park overlook,” Garrett said.

Millmont resident Chris Provost is playing it by ear for his eclipse plans. He added he is content to watch the partial eclipse in Pennsylvania and a livestream of the total eclipse if he can’t travel to it.

“That’s going to be a last minute decision for me, depending on the forecast,” he said. “This is a busy time of year for me and I don’t want to take the time off to see the totality through the clouds. That being said, I think everyone should see the eclipse if they can.”

The Great American Eclipse of 2017

Explore the history and cultural impact of solar eclipses through the Daily Item's coverage of the Aug. 21, 2017 solar eclipse.