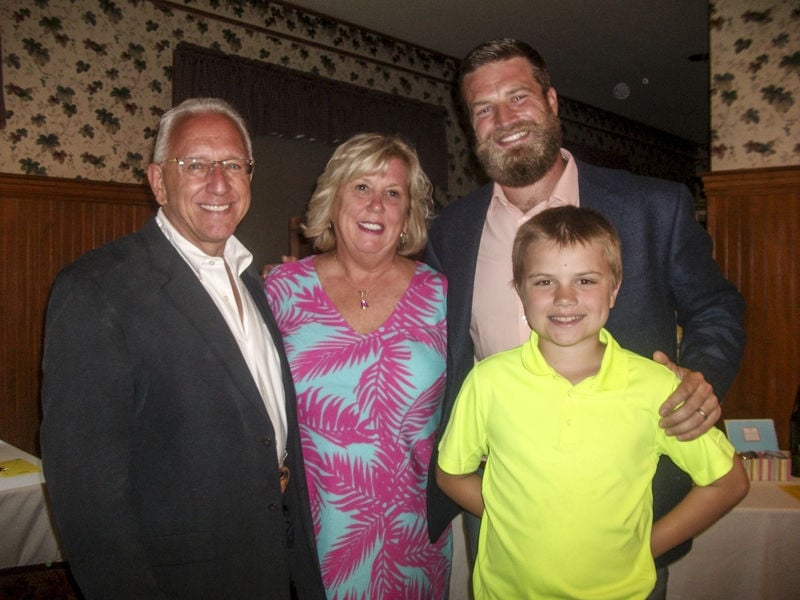 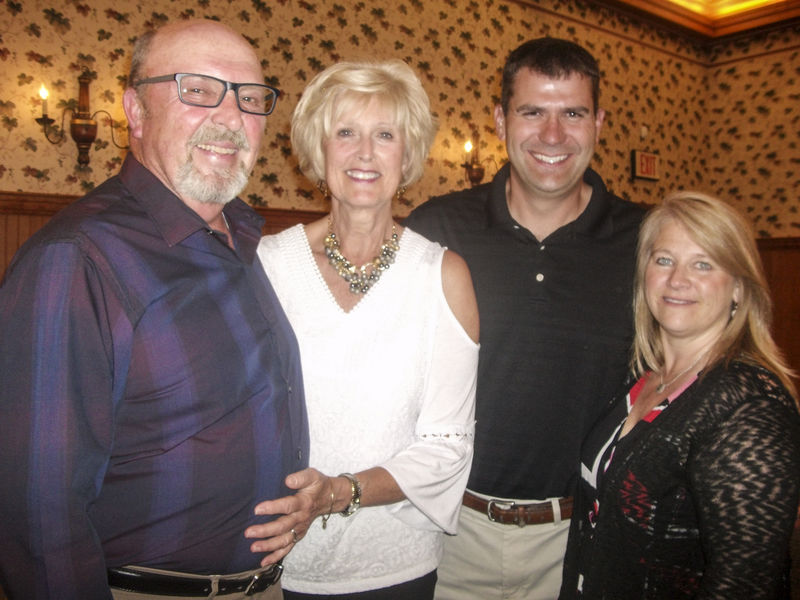 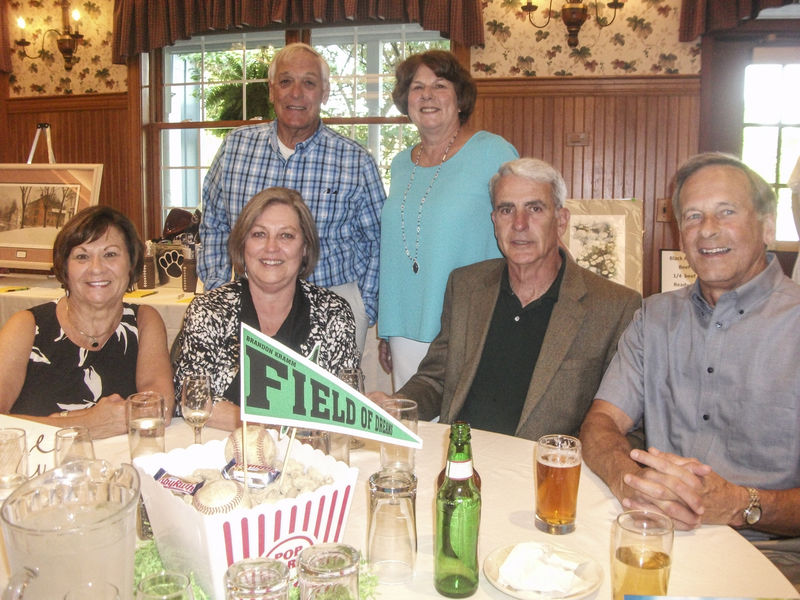 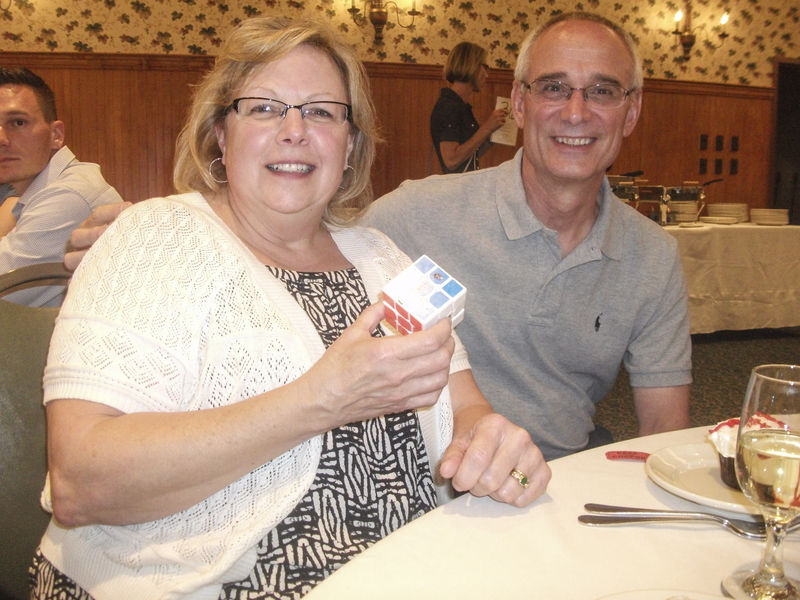 “Field of Dreams” is one of my favorite movies. On June 10, another Field of Dreams moved a step closer to becoming a reality. The second annual Brandon Kramm “Field of Dreams” Benefit Auction and Reception was held at Country Cupboard. Proceeds from this stellar event are designated for building the future home of Lewisburg baseball through the Brandon Kramm Endowment Fund.

As soon as I entered the Colonel John Kelly room, I saw Ryan Fitzpatrick, quarterback for the Tampa Bay Buccaneers circulating. Ryan, with another Harvard grad and friend of Brandon Kramm, Brad Griewe, were the evening's emcees. Brandon, a 2001 graduate of Lewisburg High School and a 2005 graduate of Harvard passed away in 2013. Brandon loved baseball and played on the District Championship team while at Lewisburg High School.

I chatted with Green Dragon Foundation executive director and neighbor Ann Glock, and hubby Steve Glock. Ann was pleased with the turnout. Jen Ayers and Jessica Olenginski were among the many volunteers and GDF staffers who were busy attending to every detail.

The silent auction was busy. People were making their way around the displays and adding their bids. The auction items included spa visits, a golf lesson, artwork, jewelry, gift packages for food, getaways, a champagne basket, microdermabrasion, private dance lessons, a Ryan Fitzpatrick autographed football, a Drew Brees autographed photo, and much more.

I had just seen Janet and Mike Roberts the day before. We laughed not knowing how soon we'd see each other again. They were with Dr. Charles and Joyce Benoit, and Cheryl and Rick Thompson.

Each table's centerpiece cleverly showcased baseball. My tablemates were delightful. I enjoyed talking with Chris and Jill Ulrich and Joe and Jan Hersh, former Dewart residents, who returned for the auction and reception.

The program began when Ann Glock welcomed everyone and introduced the emcees, Ryan Fitzpatrick and Brad Griewe. Ryan and Brad reminded everyone that the most important part of the evening was to always remember Brandon Kramm and that we all carry the torch of Brandon's memory. They acknowledged Brandon parents, Jeff and Julie Kramm and thanked them for working tirelessly to make the Field of Dreams happen.

Rubik's Cubes and Ryan's son Brady Fitzpatrick added to joy of the evening. The Cubes were given out to some of the guests who then had to beat Brady in figuring out the puzzle or make a donation. Brady is a champ and beat everyone with his time of 49 seconds. Brady autographed Cubes. Darlene Waldron proudly displayed hers and hubby Pete Waldron was very happy.

The “Wagon of Booze” ticket winner was announced as were the raffle winners. Excellent Auctioneer Clint Rockey began the live auction as the silent auction ended. The offerings were fabulous — NYC Radio City Spectacular tix, “Hamilton” tix!, vacations in Lake Tahoe and Park City Utah, a wine and brew limo tour, getaways to New York City and San Francisco, and more. The bids were flying and everyone was energized. Brooks Gronlund began a “raise the paddle” round. Guests could donate money in varying amounts. The evening ended with closing remarks by Ann Glock. Thanks to the Second Annual Brandon Kramm “Field of Dreams” Benefit Auction and Reception, the dream will be coming true.

Next year's event will be held on June 9, 2018. The Brandon Kramm Memorial Golf Tournament is scheduled for June 8.

On Saturday, June 17, instead of being “On the Scene,” I was “in the scene” at the Milton Bicentennial Parade. I was invited to strut with the 2017 Mummers Parade champs, the Quaker City String Band. It was a dream come true for this Philly Girl. Putting on the suit (what a Mummers outfit is called) gave me such a sense of pride and connection to my hometown. I've loved the parade since I was small and always wanted to be part of it.

It was pure joy to see everyone along the parade route in Milton, smiling and clapping and shouting “Thank you.” I high-fived kids, shook hands with spectators, and strutted my way up Front Street with the band. The Quaker City guys were all fun to be with. We crossed the bridge to the Milton State Park for the concert. Quaker City ended the concert with “Oh Dem Golden Slippers” and we got people up and strutting. Happiness prevailed!

Thank you to everyone who made it happen, to Quaker City String Band, and to my dad, who instilled in me the love of all things Mummers. And yes, I was wearing my golden slippers.

Look for Freddi Carlip, of Lewisburg, at coming “scenes.” She can be reached by e-mail at onthescenefsc@gmail.com