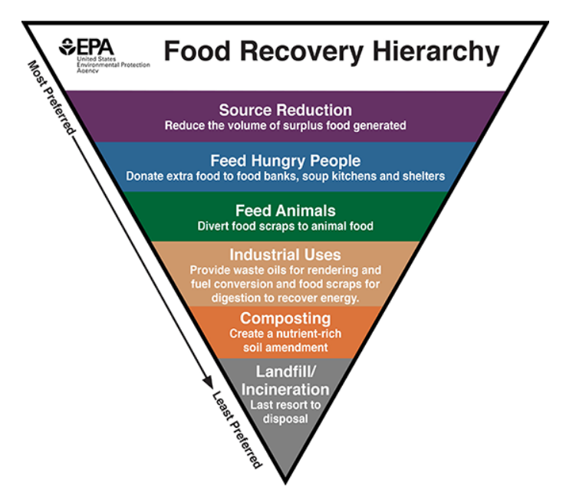 Food waste has grown in every decade since 1960 in the United States and had tripled between then and 2017.

According to the Environmental Protection Agency, the United States produced 40.67 million tons of food waste in 2017. In 1960, the country produced 13.2 million tons. More food reaches landfills and combustion facilities than any other material in everyday trash, according to the agency.

"Our findings are consistent with previous studies, which have shown that 30-to-40 percent of the total food supply in the United States is uneaten — and that means that resources used to produce the uneaten food, including land, energy, water and labor, are wasted as well," said Edward Jaenicke, professor of agricultural economics in the College of Agricultural Sciences at Penn State.

Food waste inevitably occurs in the Valley. So what are residents, farms, restaurants and supermarkets doing to combat the issue?

According to ReFED, a nonprofit that has partnered with the Environmental Protection Agency, U.S. Department of Agriculture and the Food and Drug Administration, households produce most of the country's food waste — 43 percent. On average, 31-32 percent of acquired food in households is wasted, Jaenicke said.

The USDA estimates that waste costs households $1,866 a year.

Some Valley residents use various methods to decrease their food waste, from sharing with family and pets to composting.

Buddy Huffman, of Turbotville, said, "I have animals out back and nothing goes to waste," in response to the Facebook request for food waste solutions.

Amanda Friend, of New Columbia, said she makes sure leftovers get eaten before cooking more meals.

Brian Sokoloskie, of Elysburg, a bread distributor, made a request to grocery shoppers.

Household food waste varies quite a bit by different households, Jaenicke said. "And some of the strongest findings we uncovered were: Households with higher incomes waste more."

A second finding was that "households with smaller numbers, one- or two-person households, waste a lot more," he said.

Jaenicke analyzed data primarily from 4,000 households that participated in the U.S. Department of Agriculture's (USDA) National Household Food Acquisition and Purchase Survey, known as FoodAPS. The researchers borrowed methodology from the fields of production economics and nutritional science, by which a person's height, weight, gender and age can be used to calculate metabolic energy requirements to maintain body weight.

The study is "the first to identify and analyze the level of food waste for individual households, which has been nearly impossible to estimate because comprehensive, current data on uneaten food at the household level do not exist," Jaenicke said.

Household types associated with less food waste include those with greater food insecurity — especially those that participate in the federal SNAP food assistance program, previously known as "food stamps" — as well as those households with a larger number of members.

In addition, some grocery items are sold in sizes that may influence waste, he said.

"A household of two may not eat an entire head of cauliflower, so some could be wasted, whereas a larger household is more likely to eat all of it, perhaps at a single meal."

Among other households with lower levels of waste are those who use a shopping list when visiting the supermarket and those who must travel farther to reach their primary grocery store.

"This suggests that planning and food management are factors that influence the amount of wasted food," Jaenicke said. "The most surprising, and perhaps even important finding that households that self-report healthy diets also waste more. We corroborated that by looking at what kinds of food they were buying. They were buying more fruits and vegetables."

At first, Jaenicke thought that result was shocking and maybe wrong, "but the more we thought about it, it seems perfectly reasonable because fruits and vegetables are more perishable than other things."

Jaenicke and his team are digging deeper into his findings.

"One of the things that we are just beginning to look at now is package size of food acquired and it seems like the households that waste more food buy bigger package sizes," he said.