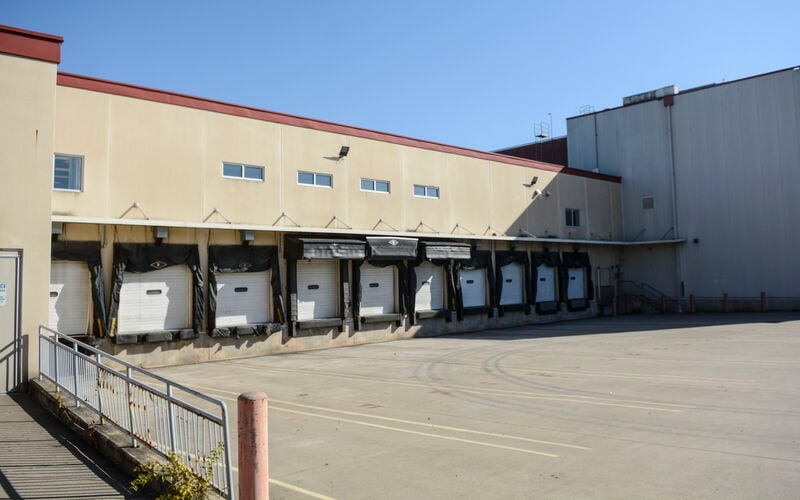 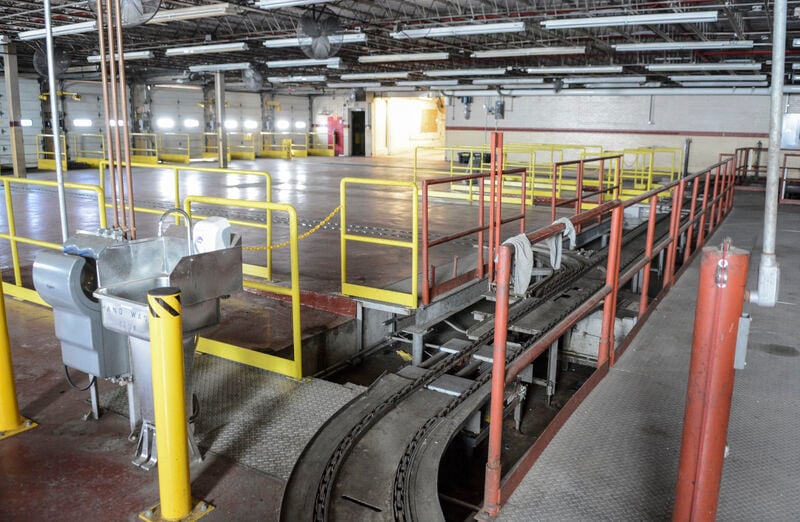 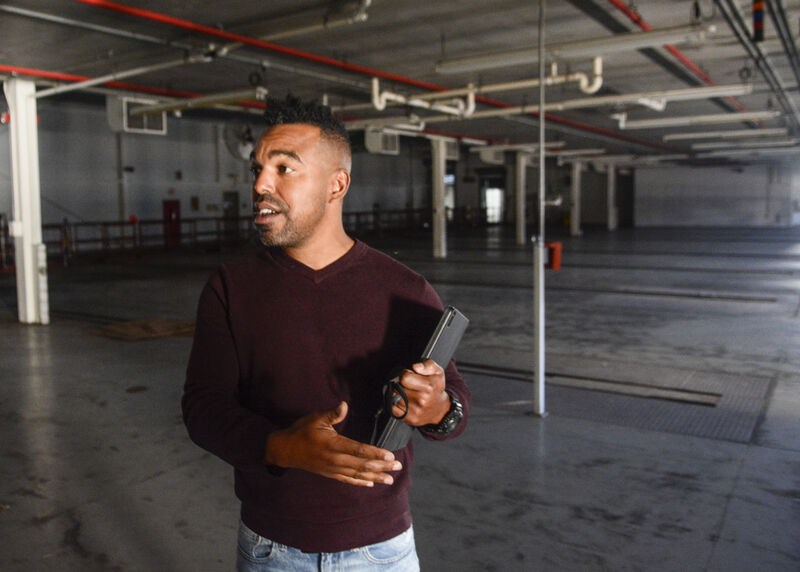 Robert Inglis/The Daily Item Pastor Mark Gittens of h2church speaks inside the former Bimbo Bakeries buidling in Sunbury that is set to be the church's new home. 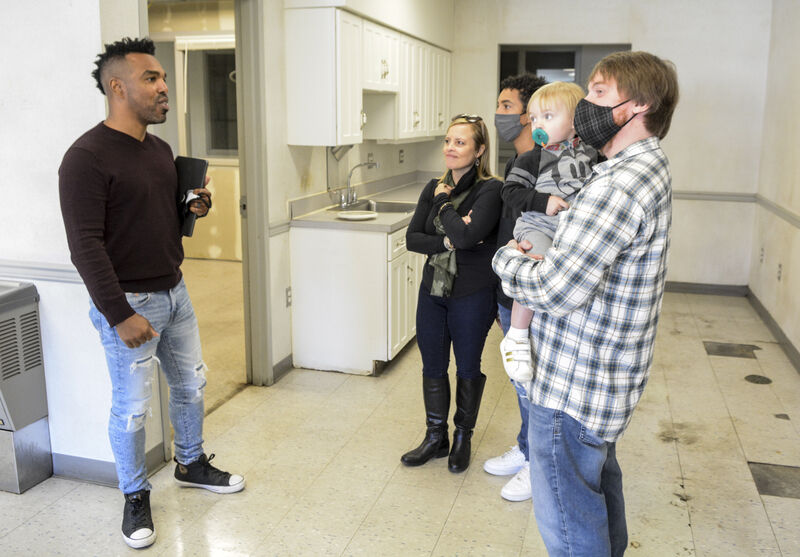 Pastor Mark Gittens, left, talks with his wife, Lori, son Isaiah, 13, and executive director Eric Attinger and his son Rosco, 1, inside a portion of the former Bimbo Bakeries building in Sunbury where the h2church will be relocating.

Robert Inglis/The Daily Item Pastor Mark Gittens of h2church speaks inside the former Bimbo Bakeries buidling in Sunbury that is set to be the church's new home.

Pastor Mark Gittens, left, talks with his wife, Lori, son Isaiah, 13, and executive director Eric Attinger and his son Rosco, 1, inside a portion of the former Bimbo Bakeries building in Sunbury where the h2church will be relocating.

SUNBURY — The h2church will spend $1.5 million to open a "city within a city" at the former Bimbo Bakeries building on N. 11th Street in Sunbury

Pastor Mark Gittens said the ministry will close on the purchase of the 54,000-square-foot building, which will become h2church's new home, on Jan. 15.

H2church is currently located inside the former J.C. Penney building at the Susquehanna Valley Mall in Hummels Wharf.

"We are not trying to be impressive but instead we are trying to make an impact," Gittens said Monday from inside the structure. "We are excited and we have a great team ready to get started."

Gittens said the church purchased the property from an investment company in Lancaster. The building has been vacant for four years.

Phase 1 of the building project will include building a stage, seating, reconstruction of the entire bay floor area with new heating and air conditioning, offices, a day care center, drug and alcohol rehabilitation counseling services, and a child abuse treatment center, a topic that is ever-important to Gittens. He expects it to be done by the end of summer 2021

"That is something that is important to me and to our community," he said. "We want this place to be a place for everyone to come and for everyone who needs help be able to get it."

Phases 2 and 3, will include a kitchen area, more space for classrooms, and whatever else the church needs, Gittens said.

The h2church congregation consists of about 500 people and Gittens hopes to see that number grow now that they will be in the city, he said.

"We are based in Sunbury and with transportation issues in our Valley we expect people who wanted to come see us will now be able to walk," Gittens said. "There is a passage in the Bible that says you are the light of the world — like a city on a hilltop that cannot be hidden. You cannot hide a city that has been built upon a mountain."

The former Bimbo building sits in the Hill Neighborhood section of the city.

Gittens' wife, Lori Gittens, said she was excited about the project and excited for the community.

"We can't wait to get this completed," she said. "Everyone is looking forward to this."

Eric Attinger, the executive director for h2church, was hired recently by Gittens and said he came into the position at the right time.

"This is going to be so amazing," he said. "I could not have come aboard at a better time."

Gittens said the building will eventually have a kitchen so people can be trained on cooking healthy, a coffee center for individuals to sit and read, and various other modern functions for the community.

Gittens said the building will be reconstructed to meet new state-of-the-art equipment and technology.

Councilman Jim Eister said he was thrilled to hear the news.

"It's great news that the building will no longer sit empty and I am sure they will have a great project up there and I look forward to seeing it completed," he said. "It sounds like it will be a one-stop building and if people have any issues that would be the place to go."

The building sits on 4.55 acres and although Gittens and the church will not own the whole complex, he said. He has the option down the line to purchase the rest of the structure.

Gittens said they have enough parking for 200 vehicles in a secure parking lot within the complex and will use only local contractors to conduct the renovations.

"I am happy to see a once-vacant property get a new life," Sunbury Councilman Chris Reis said. "I am looking forward to how h2church can further integrate themselves within the community."

City Administrator Jody Ocker said she was happy for Gittens and the h2church.

"I am glad to see something is being done with it," she said of the former Bimbo building. "I think it is great to have this in a primarily residential section of town rather than in some industrial park. I'm happy this is being developed for the people in the community."

"It is a great thing for the city and he (Gittens) has wanted to be in the city for quite some time," Karlovich said. "I congratulate Gittens and welcome his congregation to Sunbury."

Councilman Josh Brosious said he was glad the vacant building is being used.

"The h2church will bring services to help the citizens of Sunbury," he said.

Councilman Ric Reichner said he was excited to see the transformation of the building.

"I think it is great especially that they are in town here and it can have a positive effect on bringing more people to town to see what we have to offer," Reichner said.

State Rep. Lynda Culver, R-108, of Sunbury, said she was also happy to see the vacant building being used.

"This is wonderful news," Culver said. "This is all incredible and he (Gittens) has been looking for a home for quite some time. His ministry has turned around the lives of many individuals and a community as a whole. He has incredible plans and we are blessed to have him here."

For Gittens, it's just another day at the office, he said.

"We will continue to do what we can for the community and help as many people as possible," he said. "This isn't for show. This is for the betterment of our Valley and we are excited to be able to have the opportunity to help the community."