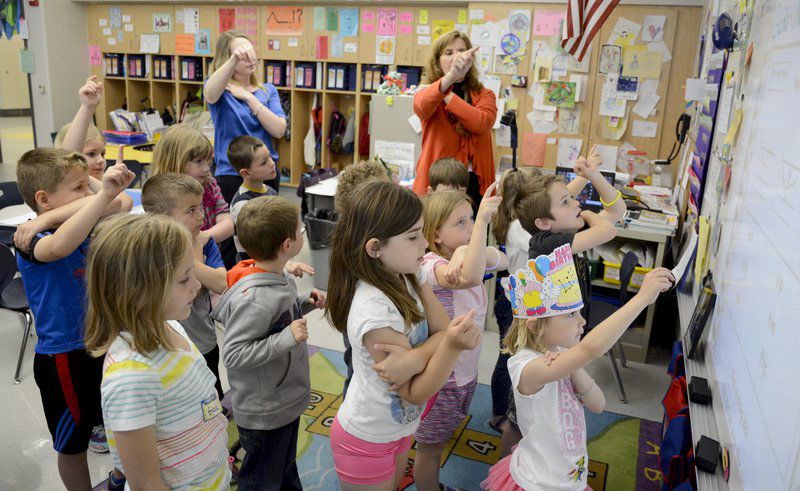 Kindergarten students in Mrs. Swank's kindergarten class at the Danville Primary School on Monday go through a lesson on phonics. 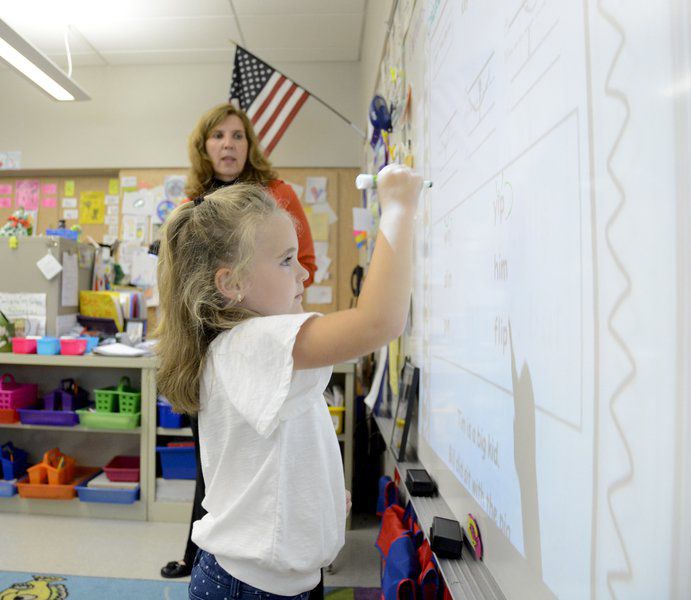 Danville Primary School kindergarten student Ruby Bellott, 6, writes on the white board while doing a lesson in phonics on Monday. 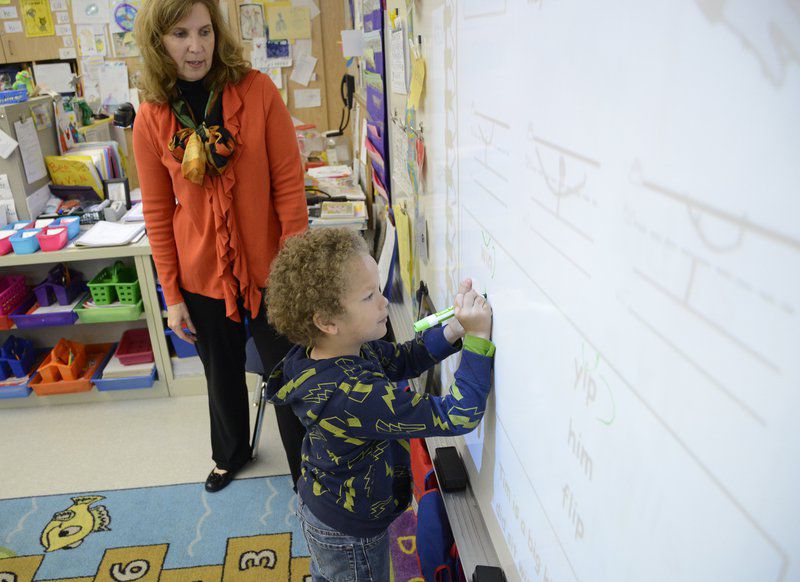 Robert Inglis/The Daily Item Joel Kendall, 6, writes on the white board during a phonics lesson in his kindergarten class on Monday. 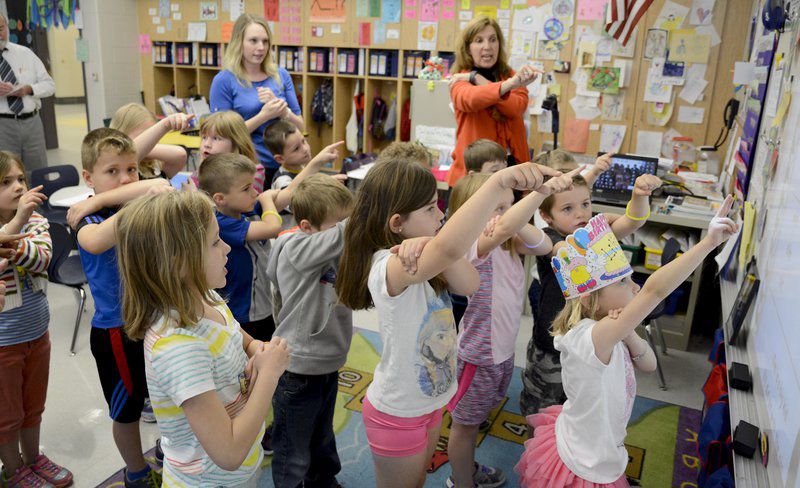 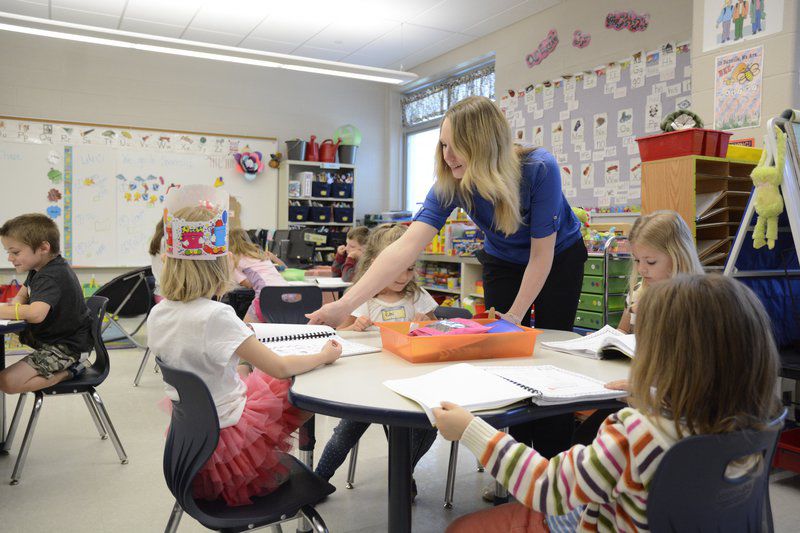 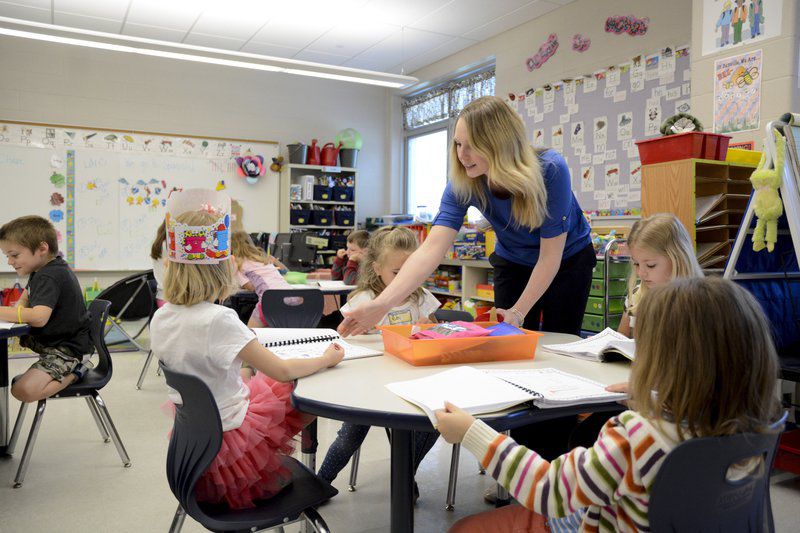 Kindergarten students in Mrs. Swank's kindergarten class at the Danville Primary School on Monday go through a lesson on phonics.

Danville Primary School kindergarten student Ruby Bellott, 6, writes on the white board while doing a lesson in phonics on Monday.

Robert Inglis/The Daily Item Joel Kendall, 6, writes on the white board during a phonics lesson in his kindergarten class on Monday.

DANVILLE — As soon as reading specialist Ann Marie Cantore told the kindergarten students they were going to review the short i, they responded with “Itchy,” for Itchy the worm with a white fuzzball head.

Itchy is the classroom mascot for the short i, a part of a lesson in phonics that’s common these days in kindergarten, first and second grades in the Danville Area School District.

Cantore reviewed a list of words with the short i —win, slim, pin, yip, him, flip — that were listed on the white board in Miki Swank’s classroom.

“I say it as in itchy,” Cantore said. “Stand up so we can skywrite it.”

The students jumped up, crowded together and wrote in the air with their fingers.

She asked for a volunteer to code a word and determine the short vowel and if the word was a closed syllable, which is a short vowel with consonants before and after. Chase Lowe quickly volunteered, followed by others, who all correctly coded the words.

The lesson is part of the Orton-Gillingham method of teaching reading, which was developed in the 1930s by Samuel Torrey Orton, a neuropsychiatrist and pathologist at Columbia University, and Anna Gillingham, an educator and psychologist at Columbia. The method uses auditory, visual and tactile techniques designed to teach dyslexic students. The district introduced the prgram after school board member Dawn Koons-Gill saw the results with her son, whom she had taken to the Children’s Dyslexia Center in Bloomsburg.

She spoke with Director of Curriculum, Instruction, and Technology Dawn Brookhart and other administrators and they looked into it. Thirteen teachers ended up undergoing a year of intense training in O-G with Cathy Clements, the dyslexia center director.

The district piloted the O-G phonics instruction in the core curriculum in two second-grade classrooms in the 2014-2015 school year. In 2015-2016, the district introduced a specific curriculum to teach it in all kindergarten through second-grade classes, and in the next school year, it plans to expand the curriculum into third- and fourth-grade classrooms, with the course in fourth grade centered on morphology, or the origin of words. School administrators also look to begin phonics instruction aligned to Orton-Gillingham in Head Start and pre-kindergarten classes in the district.

Danville now is the only district in the state teaching it to entire classes, in addition to teaching it one-on-one in remedial instruction, as some other districts do, Brookhart said.

She and Cantore said Superintendent Cheryl Latorre and the school board have been very supportive of the program.

“The materials (for the Danville curriculum) were all developed by our Orton-Gillingham teachers,” Brookhart said. “The (state) Department of Education wanted us to give them those materials. We plan to copyright them.”

It uses a multi-sensory approach.

u says up as in umbrella.

o says o as in octopus

“They start with large movements,” Cantore said. “That’s what skywriting is. Even when they spell, they use their finger to tap out the sound. They spell it as they tap their finger, then they write it. When they get stuck, we go back to sounds. When they read and come across a word they don’t know what it is, they trace it with their fingers.”

“This is the first year it’s in the core classroom,” Brookhart said. “We tried it in second grade before. We saw results with remedial students.”

That’s when they realized all students would benefit from the program.

Brookhart even has seen results with her younger daughter, who is in third grade and has had O-G classes. That daughter is a better reader, writer and speller than her older sister, who is in seventh grade. Brookhart attributes the difference to O-G.

Students in O-G classes learn how to spell, not from memorizing a list of words, but by learning concepts.

“Classroom teachers will even tell you students remember concepts,” Cantore said. “It spills over into other things.”

She said one of the big things that makes O-G successful is its repetition.

“Kids start to look at words differently,” she said.

“In all of my years, I never have seen anything as effective as Orton-Gillingham,” Brookhart said.