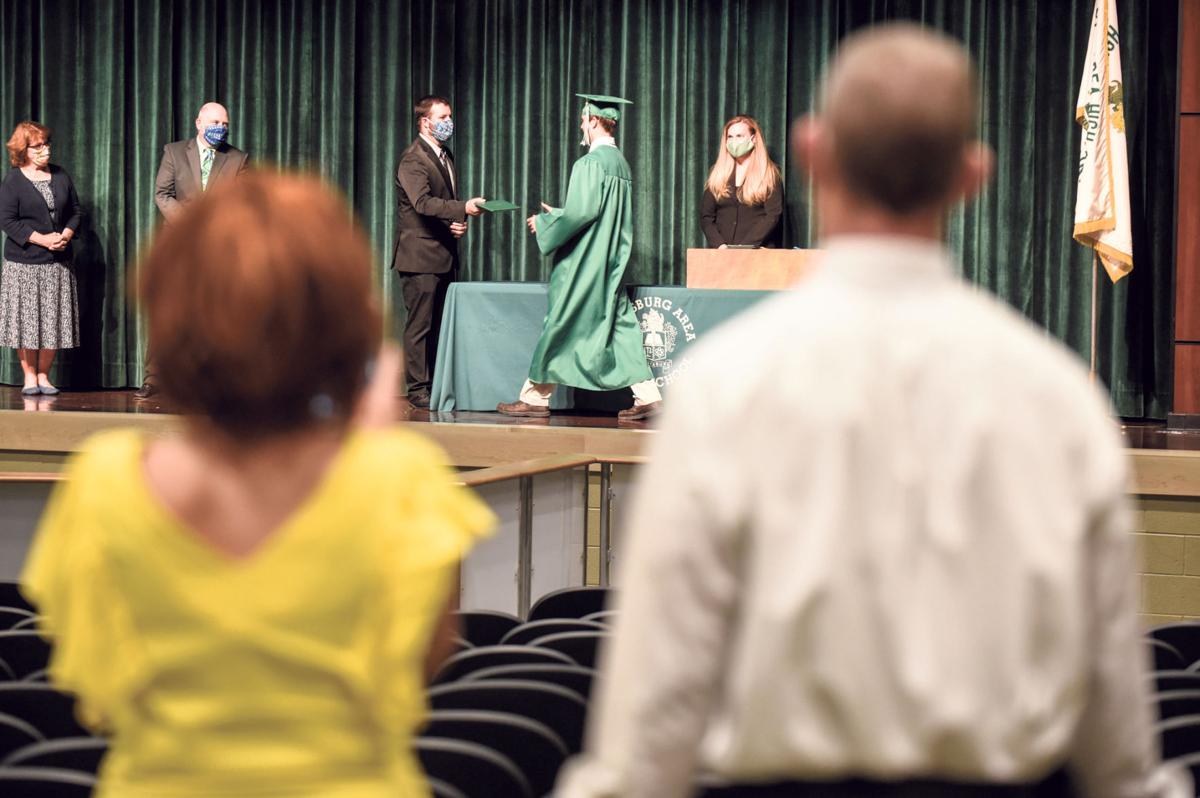 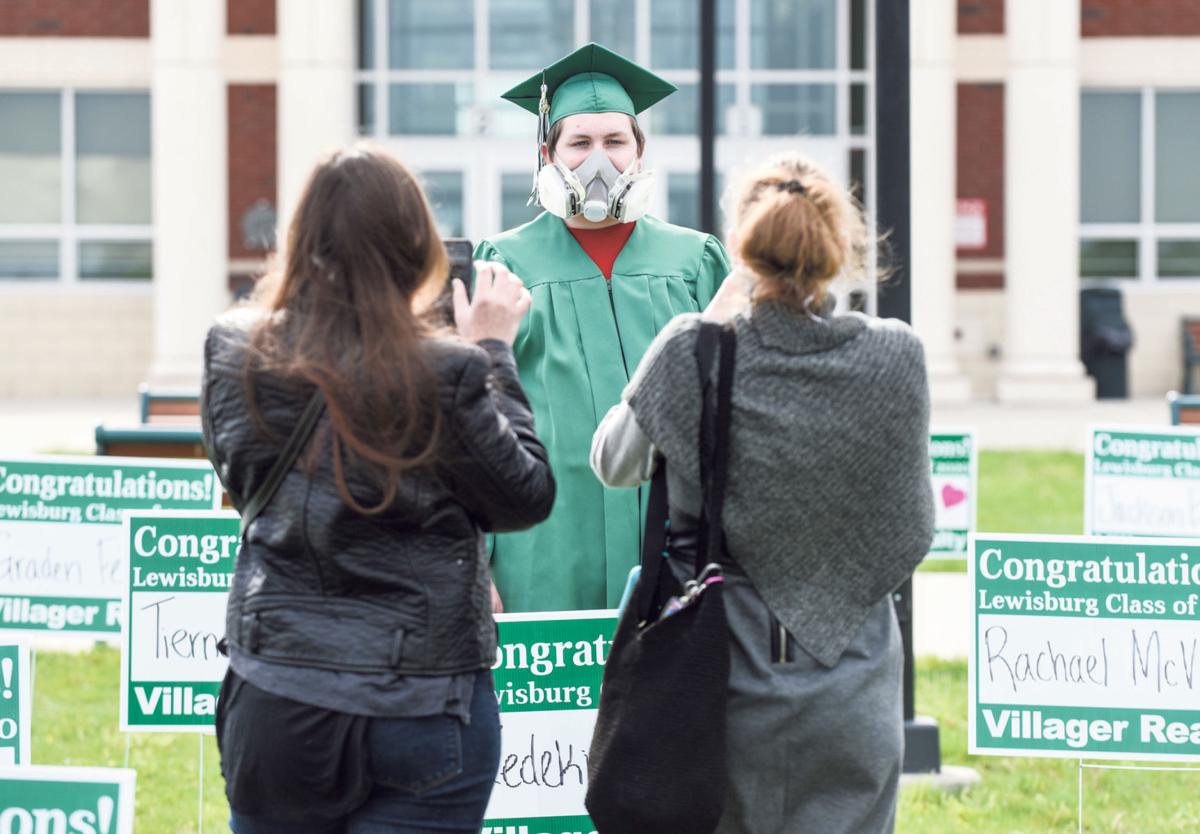 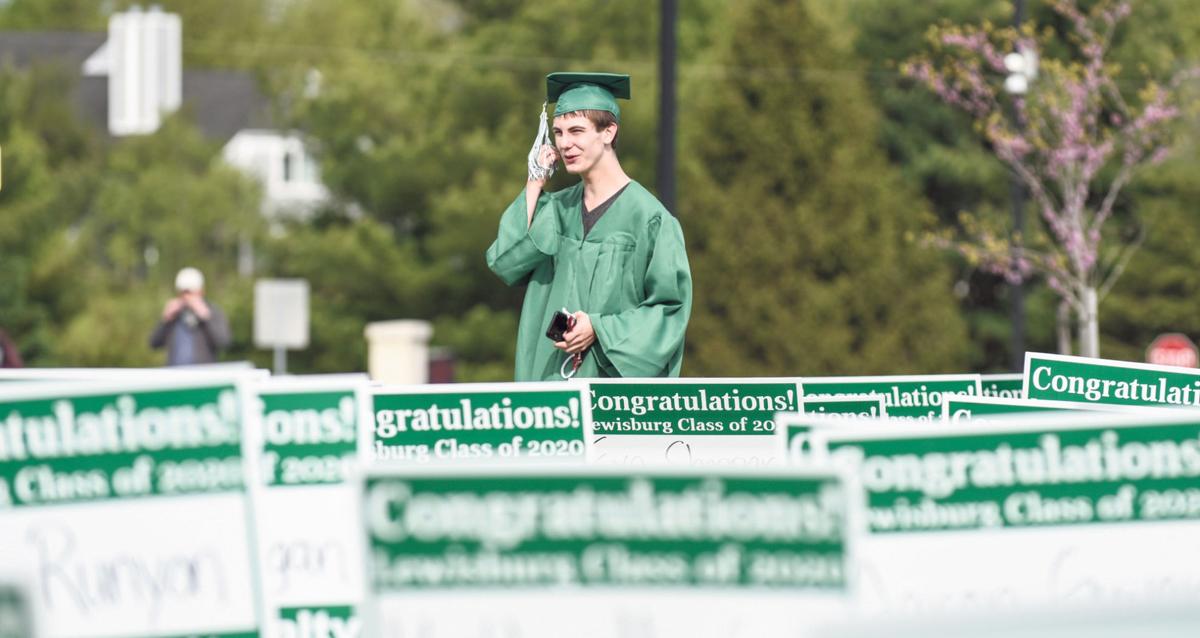 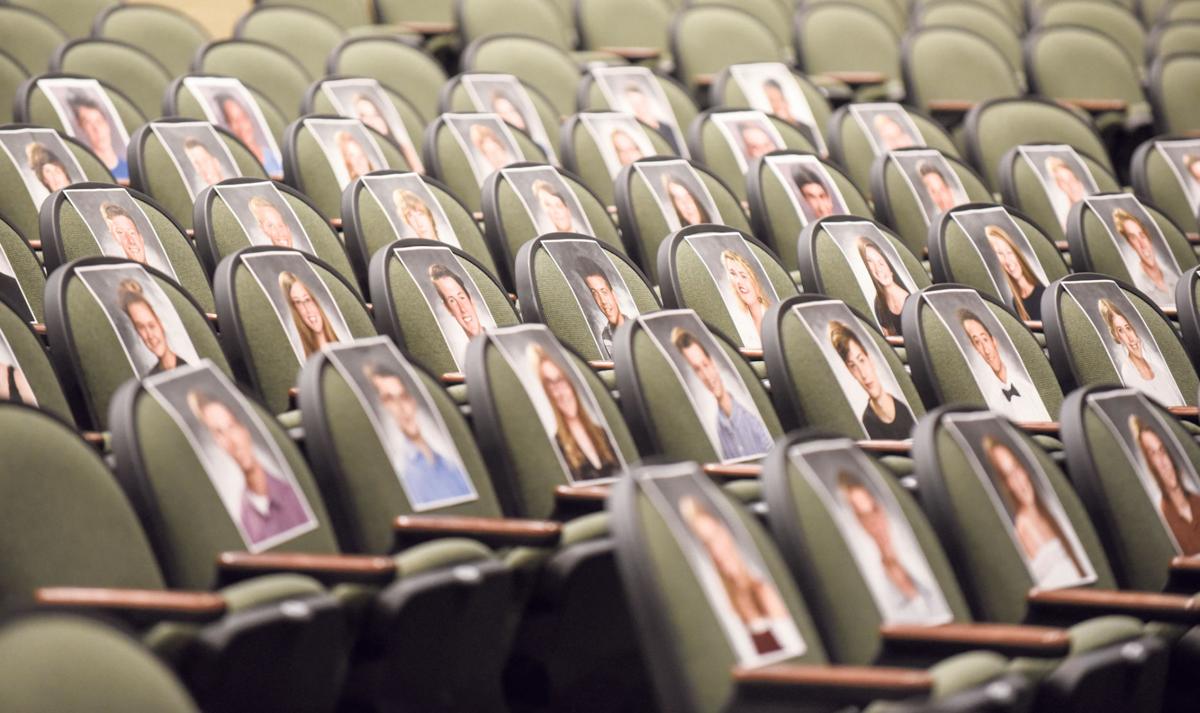 Robert Inglis/The Daily Item Pictures of the graduating class were taped to the seats inside the auditorium on Wednesday evening during a graduation ceremony where only one senior was allowed in at a time.

Robert Inglis/The Daily Item Pictures of the graduating class were taped to the seats inside the auditorium on Wednesday evening during a graduation ceremony where only one senior was allowed in at a time.

LEWISBURG — Alec Reed stepped onto the auditorium stage at Lewisburg Area High School dressed in cap and gown, accepted a diploma and mocked handshakes with school officials before stopping himself.

“I guess I’ve got to do this,” Reed said, moving the tassel on his mortarboard himself from right to left.

Lewisburg High graduates 132 seniors in its Class of 2020. All will do so in the era of social distancing. The school year effectively ended abruptly for all students on March 13, the last day classes were in session in Pennsylvania’s public schools.

Valley schools are planning virtual graduations to supplant in-person commencement. Traditional ceremonies are an impossibility under the government’s current mitigation measures put in place to slow the spread of the novel coronavirus.

“We’re trying to keep it as normal in the age of COVID-19 as we can,” High School Principal Paula Reber said.

Lewisburg got started Wednesday when some students, like Reed, crossed the stage in a near-empty auditorium. Others will do the same tonight. Students were allowed to remove face masks when crossing. On stage were seven school district officials including Reber and Superintendent Steven Skalka.

Students registered for specific time slots. They were allowed small groups of guests, entering and exiting the auditorium together — alone, masks on — before the next graduate and group passed through.

“Not as normal as it should have been but it was still great,” said new graduate Erin Joseph after crossing the stage. She plans to attend Penn State Altoona for mechanical engineering.

The silence during the ceremony wasn’t lost on Joseph’s mother, Lisa Joseph. Aside from the voice of Guidance Counselor Vicki Fennell calling each student’s name, there was almost no noise.

“Very quiet,” Lisa Joseph said. “But she’s excited to move on and look toward college.”

“It was surreal,” said Geetha Chittoor, who watched her son, Himay Gora, graduate. “As a mom, I think you would expect more but I’m happy to see him get on the stage to get a diploma. They still made it happen given the circumstances. I think that’s a big thing, and a huge shoutout to all the school officials for making it happen.”

Trevor West crossed the stage with his family standing at the back of the auditorium. They used smartphones to capture the moment West accepted his diploma from the school board president, Jordan Fetzer. West plans to attend University of Pittsburgh this fall and study finance.

“It’s definitely been a little restricting. The whole month of not leaving our houses, that kind of stunk,” West said. “It’s definitely hard to not see everybody and go through all the stuff like senior awards and senior breakfast.”

“It’s kind of sad that they’re doing it this way but we’re just excited and so happy for him,” said West’s mother, Laura West.

The virtual ceremony will be professionally edited by a parent volunteer, Reber said. It will be uploaded to the district’s website and shared from the district’s social media pages at 2 p.m. May 30, the date and time for the now-scuttled in-person commencement ceremony.

A senior drive is planned for 5 p.m. May 30, replacing the new tradition of senior classes walking through all four district school buildings. The drive begins at the high school and will pass by all the schools. Seniors are encouraged to decorate vehicles but stay inside throughout the route.

“I am so proud of the senior class. It’s such a disappointment to miss out on so many milestones at the end of the year,” Reber said. “Their resiliency and desire to make the world a better place … those qualities about them have shown through.”