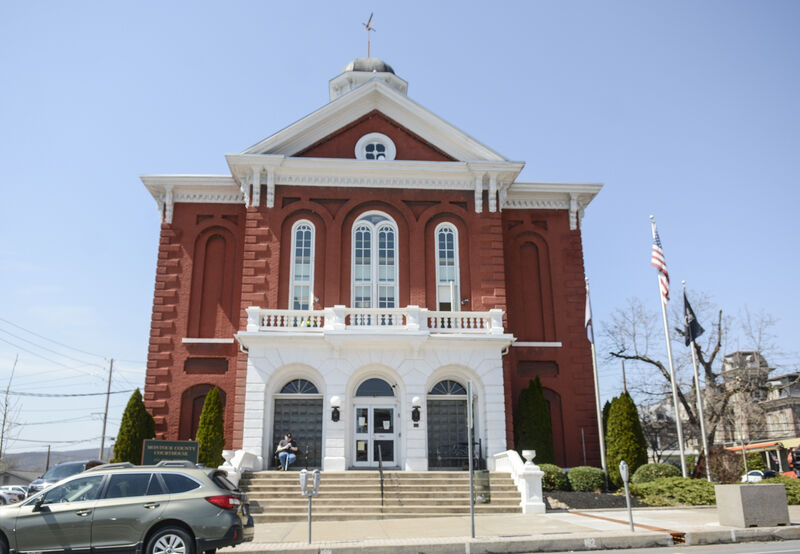 Renovations to the Montour County Courthouse are nearing completion. 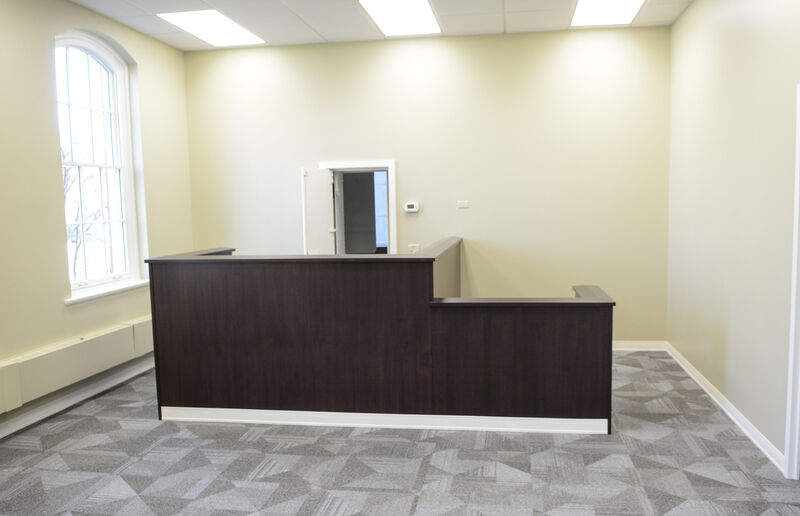 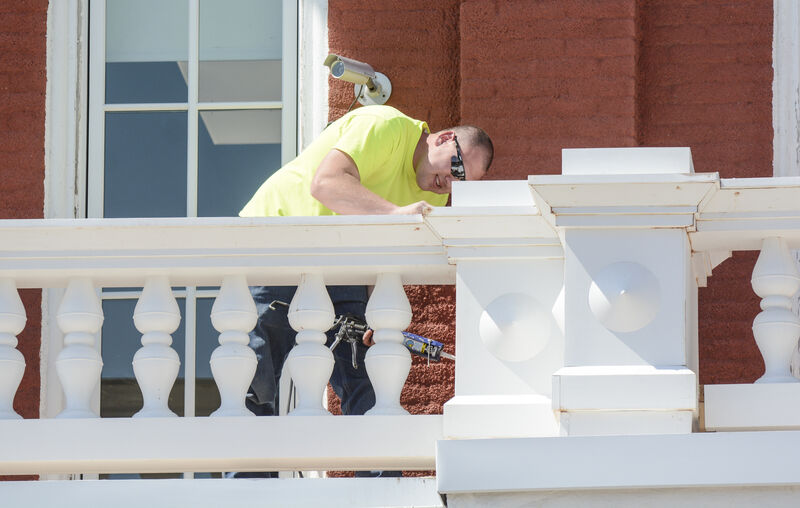 Wayne Shaffer does some caulking work on the second floor front of the Montour County Courthouse on Wednesday afternoon. 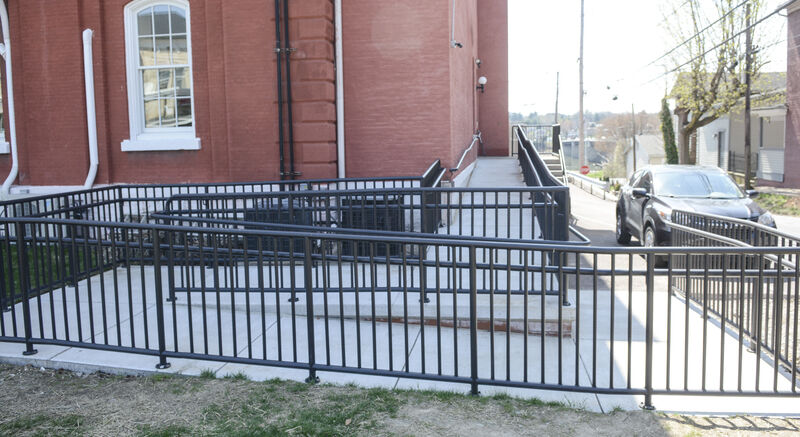 A new wheelchair ramp at the Montour County Courthouse was part of the recent renovations. 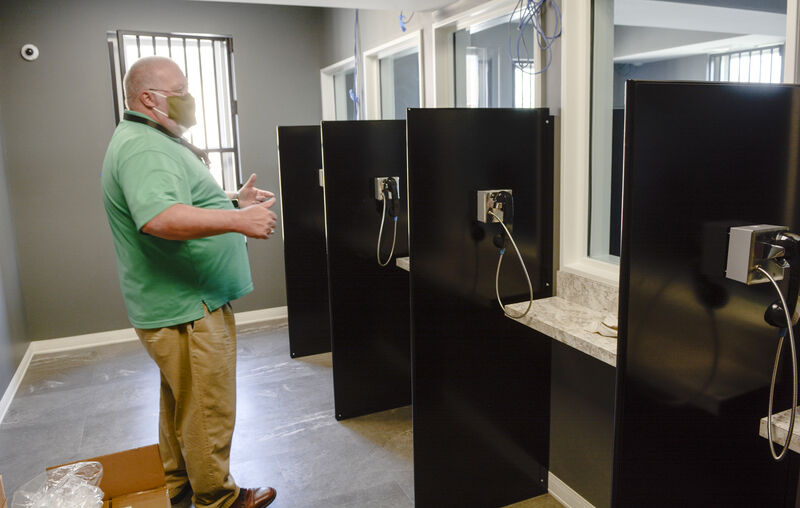 Warden Bill Wilt talks about improvements made to the visiting area at the Montour County Jail as renovations near completion. 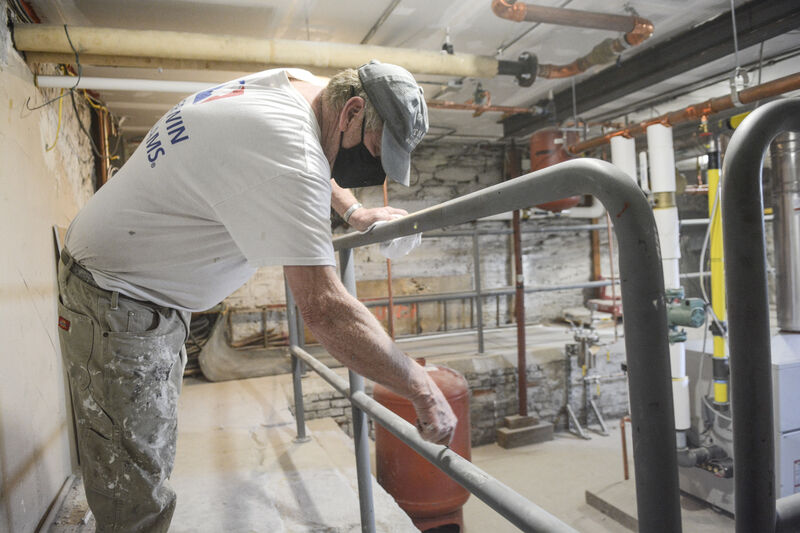 Mervin Mitzel Jr. prepares safety rails for painting in the basement of the Montour County Courthouse on Wednesday.

Renovations to the Montour County Courthouse are nearing completion.

Wayne Shaffer does some caulking work on the second floor front of the Montour County Courthouse on Wednesday afternoon.

A new wheelchair ramp at the Montour County Courthouse was part of the recent renovations.

Warden Bill Wilt talks about improvements made to the visiting area at the Montour County Jail as renovations near completion.

Mervin Mitzel Jr. prepares safety rails for painting in the basement of the Montour County Courthouse on Wednesday.

Most of the renovation work at the courthouse is finished, except for the additions to Shrawder’s office, which the Administrative Office of the Pennsylvania Courts (AOPC) requires before the office can open, county Commissioner Trevor Finn said.

The office move into the former commissioners offices on the first floor is the final one in the $4 million county building renovation and realignment project.

The project included the $750,000 purchase of the former Danville Elementary School on East Front Street two years ago for use as the county administration center. The commissioners office and several other county offices moved there during the last week of December. Other than Shrawder's office, only the county detective's office has to move to the courthouse.

"The AOPC is requiring certain things be done for Marv's staff — a wall, bulletproof window, things of that nature," Finn said. "AOPC is paying for all that. We already got the grant through the 26th Judicial District."

The state awarded the judicial district, which includes Columbia and Montour counties, a grant of up to $12,000 to use for the security measures.

"The AOPC extended the deadline for us until the renovations are completed," said Tami Kline, court administrator.

Since no other magisterial district judge office in the district requested funds, the district can use up to the $12,000 for Shrawder's office, as long as it is used for approved items, Kline said.

"We are planning on using the funds for two solid core doors, shatterproof glass at the transaction window and ballistic panels for the reception areas," she said. "I do not have any prices yet for those items because I was told we will complete those projects after the initial remodeling is complete."

He added that county officials also needed a separate place outside of Danville Borough in case of a disaster.

Finn said that otherwise, the project was moving along as planned.

"There were some delays due to weather," he said. "They're still doing outside work. The inside work is pretty much on schedule."

"The only one that didn't move from the county home is the county detective," Holdren said.

Children and Youth Services, the Veterans Affairs office, 4-H and the county Extension Service office moved from the county home on Woodbine Lane in Mahoning Township to the administration center in Danville when the commissioners office moved in December.

Human Services and the planning office moved from the adjacent Woodbine Lane county building to the administration center around the same time, Holdren said.

"The food bank (distributions) in January, February and March were held at the Woodbine site," he said.

The next distribution is set for April 29, from 9 a.m. to noon, at the county administration building, 435 E. Front St., Danville, said Greg Molter, director of Human Services.

"We will be receiving clients at the doors off of Iron Street into what used to be the gym-cafeteria," Molter said. "There is street side parking available in both directions, and we hope to have staff and volunteers to keep things moving."

The commissioners approved just over $2.5 million in project base bids last April for site and general construction, heating and air conditioning, electrical and plumbing.

Besides converting the former elementary school into a county administration center, the work also included boiler replacement and renovations of the courthouse and at the county jail. County officials hope to sell the county home and adjacent building on Woodbine Lane.

With the district judge office move to the courthouse, all court-related offices, including the district attorney, the sheriff, probation, the prothonotary and clerk of courts, and the register and recorder offices will be in the same building.

The courthouse renovations also included replacement of all windows in the three-story building to make them more energy-efficient; renovation of 500 square feet on the third floor; demolition and reconstruction of the handicapped-accessible ramp in the back.

Renovations also included the former warden's home at the county jail to create a new visitors center. The visitors center is more secure. Inmates will no longer have physical contact with visitors but talk by phone on either side of a glass divider. The renovated area replaces the basement area were visitations were held.