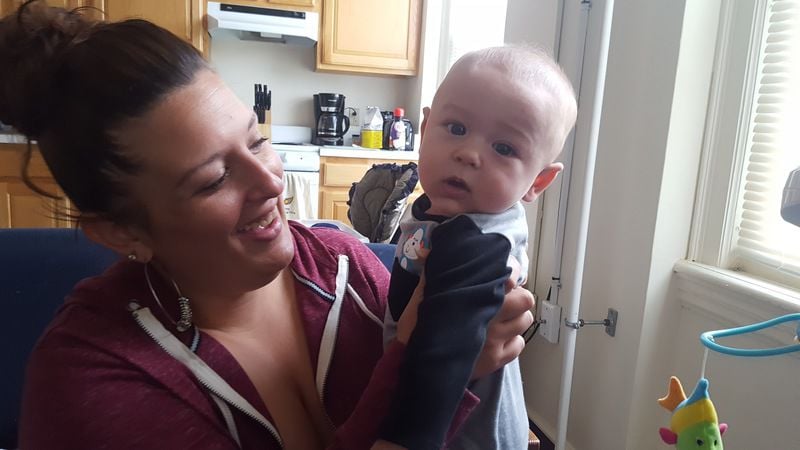 Stephanie Wilson, 30, and her 4-month-old son, Jaxson. Wilson, a recovering heroin addict, is nearly 13 months sober — the longest amount of sobriety she's maintained in a decade. 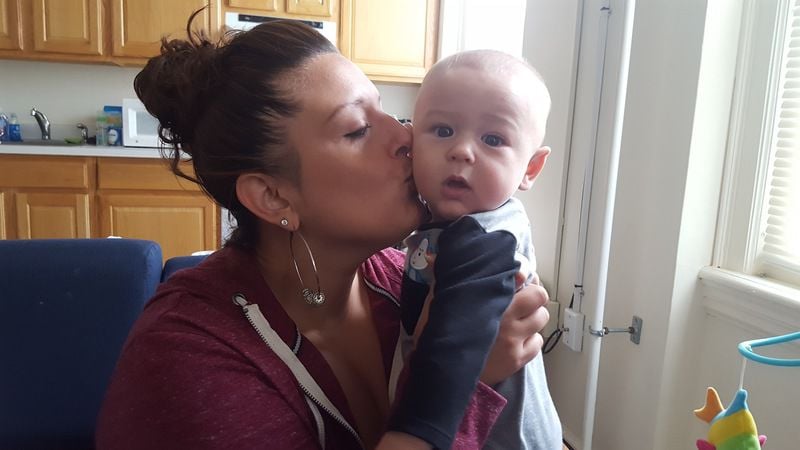 Stephanie Wilson, 30, kisses her 4-month-old son, Jaxson. The two live together at Gaudenzia Fountain Springs, a residential treatment center for women, many living on-site with children. 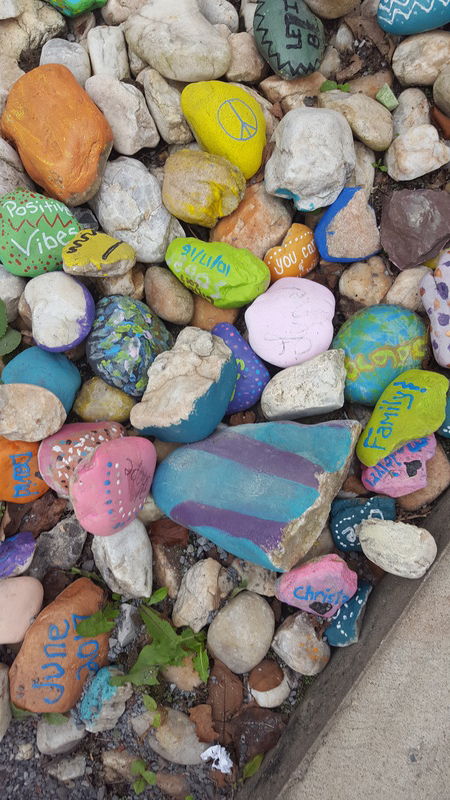 Painted stones with messages of encouragement outside Gaudenzia Fountain Springs near Ashland, Schuylkill County. The facility offers residential drug rehabilitation to women, many living there with children.

Stephanie Wilson, 30, and her 4-month-old son, Jaxson. Wilson, a recovering heroin addict, is nearly 13 months sober — the longest amount of sobriety she's maintained in a decade.

Stephanie Wilson, 30, kisses her 4-month-old son, Jaxson. The two live together at Gaudenzia Fountain Springs, a residential treatment center for women, many living on-site with children.

Painted stones with messages of encouragement outside Gaudenzia Fountain Springs near Ashland, Schuylkill County. The facility offers residential drug rehabilitation to women, many living there with children.

ASHLAND — Stephanie Wilson apologizes for the children’s toys laying about her apartment and gestures as she turns to sit on her couch as a way of saying “this is it.”

This is home — a small one-bedroom apartment at Gaudenzia Fountain Springs shared with her 4-month-old son, Jaxson. She is one of 28 mothers living at the inpatient drug rehabilitation facility south of Ashland behind a long-shuttered Schuylkill County hospital.

Her apartment is the type where a few long strides take you end to end. It’s quaint and, ultimately, temporary, but for now it’s home. That’s fine by Wilson, 30, a recovering heroin addict just days shy of 13 months sober.

She completed a six-month recovery program in May, gave birth three days later and, experiencing a shaky restart after moving out on her own, returned to Gaudenzia to recoup and refresh.

“It’s a stepping stone,” Wilson said. “They really help out by allowing you to get your feet on the ground and help you become an independent person.”

Cathleen Palm founded The Center for Children’s Justice, a Berks County advocacy group. Residential programs that allow parents to live with their children are hard to come by in Pennsylvania, she said.

Stable housing can give a parent the time it takes to begin recovery without losing custody. Wraparound services are crucial, Palm said, such as childcare, budgeting, employment services.

Addiction began at home in Northern New Jersey. She drank and smoked marijuana beginning at age 14. There’s a history of heavy drinking in her family, Wilson said, and she carried the torch. At 19, a broken ankle led to a prescription for Vicodin.

Personal trauma fueled Wilson’s addictive behavior. Her best friend overdosed on fentanyl, fell and struck his head on a bathroom tub and floor and died of a brain injury. Her beloved grandfather died two years later.

She was badly injured in a car accident at age 20. Back surgery came at age 22. She learned to doctor-shop. She visited up to five different doctors a week and estimates she consumed well over 200 pills of the prescription opioid oxycodone each week.

The bottle didn’t tell her what to do anymore. She went by instinct — exceeding the recommended dose, giving pills to some friends, selling pills to others.

Wilson grew irritable when she ran low or, somehow, out of pills. She said she was ignorant and rude toward her loved ones. When she was high, she was withdrawn.

“I felt like I was Superwoman, personally, I thought I could get anything accomplished. I thought I was a functioning addict. I held a job, I had a car, I had my own apartment. I got things done. In all reality, everything was falling apart,” Wilson said.

Wilson was couch-surfing at age 25 when she made her way to Bloomsburg to live with a relative — a short-lived accommodation. Her family in New Jersey had worn on Wilson’s behavior. She tried and failed to stay sober before leaving the Garden State.

Wilson said she was sober five months while living in Columbia County before she cracked and snorted heroin for the first time. She swapped stays in county jail and a Berwick homeless shelter. At 26 years old, she was shooting six bags of heroin a day.

“That demon came out very, very quickly. It was something like I’ve never experienced,” Wilson said of shooting heroin for the first time.

Part-time jobs, drug sales and pleas for money from her out-of-state family kept her afloat. She was in and out of bad relationships with men who were users, too. This was her life for the next three years.

A cold night breeze blew raindrops onto a partially enclosed porch in Berwick where Wilson and an ex-boyfriend lay atop cardboard boxes. Her clothes on her body and the cardboard beneath her grew wetter and wetter as she lay awake.

Her mind raced. How did it come to this? When would it stop?

“I was at my lowest point,” Wilson said.

Wilson found herself in Columbia County jail on drug charges again on Sept. 2, 2016. Inside the jail, she’d learned she was pregnant. A previous miscarriage convinced her she’d never be a mother. She was wrong.

“I’m now in jail. I’m now pregnant. I’m facing felony charges. My probation’s being revoked. I’m about to have a baby and the father is in jail with me,” Wilson said.

“I wasn’t ready to quit when they first picked me up," she said. "When I found out I was pregnant, that was really my last hurrah. I had to come to terms with the fact my life was about to drastically change in more ways than one.”

Wilson said she reached out to her probation officer for help. A lenient revocation found her held in jail another three months before being accepted into treatment at Gaudenzia Fountain Springs. She was four months pregnant.

Sometimes it’s a barrier. They fear the stigma of being a parent in addiction or the chance they could lose custody of their child.

Sometimes, though, it’s a motivator.

“They know they want to get their addiction under control, get treatment, get on track and be a parent to their child,” Valdez said.

Gaudenzia Fountain Springs serves women only. It can accommodate up to 31 clients, each with up to two children apiece. Many of the women live there in apartments with children. Some are working to find sobriety and regain custody.

“They’ve usually lost everything by the time they walk through these doors,” Hutnick said.

The apartments are run as a therapeutic community. Each resident, like Wilson, has a role to play and can earn greater responsibilities.

Treatment is 12-step based. Hutnick said Medication-Assisted Treatment like Vivitrol, which thwarts cravings and blocks the effects of prescription opioids and heroin, is available. Clients develop individualized treatment plans and have one-on-one counseling. Group counseling is held daily. Children stay in on-site daycare as the mothers work on recovery.

Lessons on time management, budgeting and parenting are all offered. Gaudenzia helps clients with basics like finding a primary care physician or psychiatrist plus helps link them to additional social and employment services.

These are lessons Wilson continues to learn. It's been a decade since she's been truly sober this long.

In the mornings, she wakes up to a babbling baby. They smile at each other. Wilson feeds her son. Takes him for walks. She finds enjoyment in grocery shopping, hanging out at a coffee shop, spending time with family and friends. The little things, she said.

She's careful, though. As she puts it, her recovery is long-term. It's never over. The minute she lets up, she said she'll fail.

"That demon, he is still in there. He is fighting me every single day, some more than others. He is waiting for that weak moment where I let my guard down," Wilson said. "I'm telling you, if there ever is a next time, I am not going to make it. I can't let that happen."