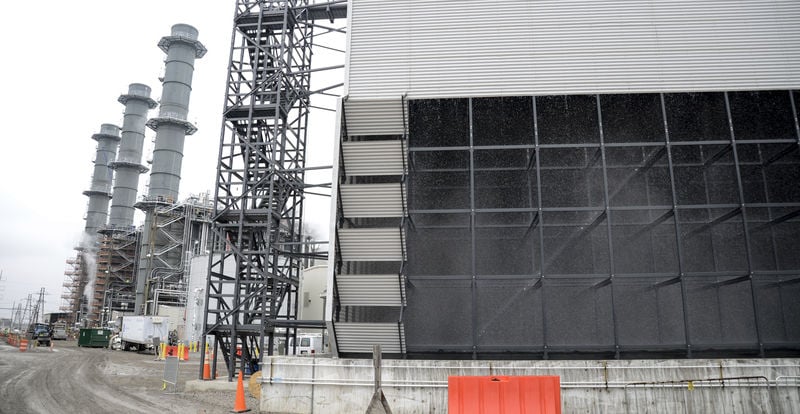 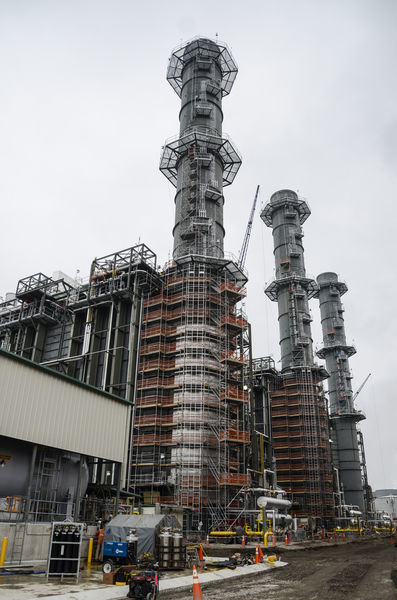 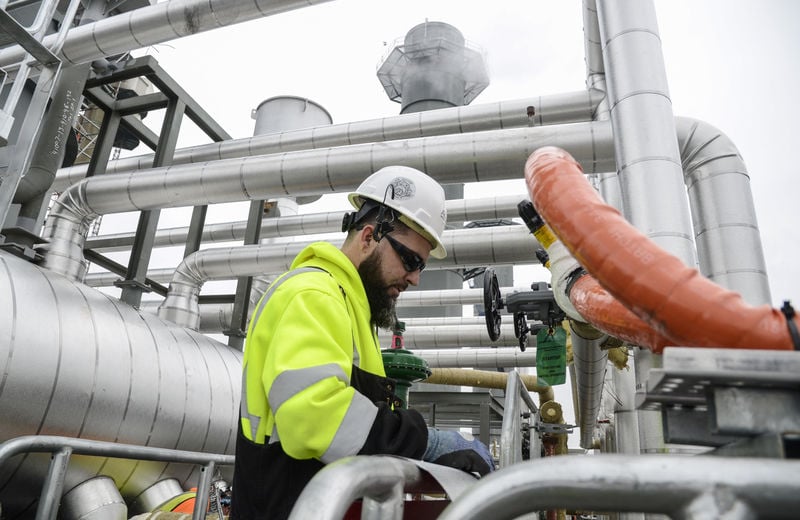 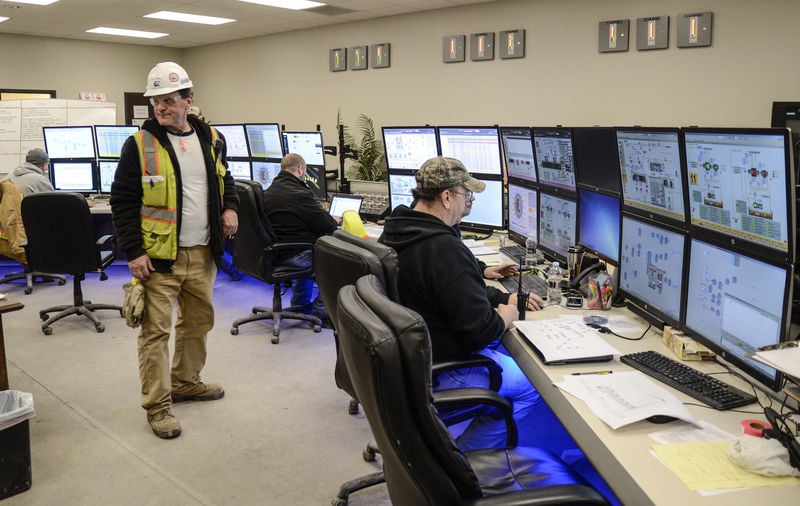 Robert Inglis/The Daily Item Workers monitor the entire power plant from the control room at Panda Hummel Station as one of three units is tested operationally. All three units were operating simultaneously and synchronized to the power grid for a period Wednesday. 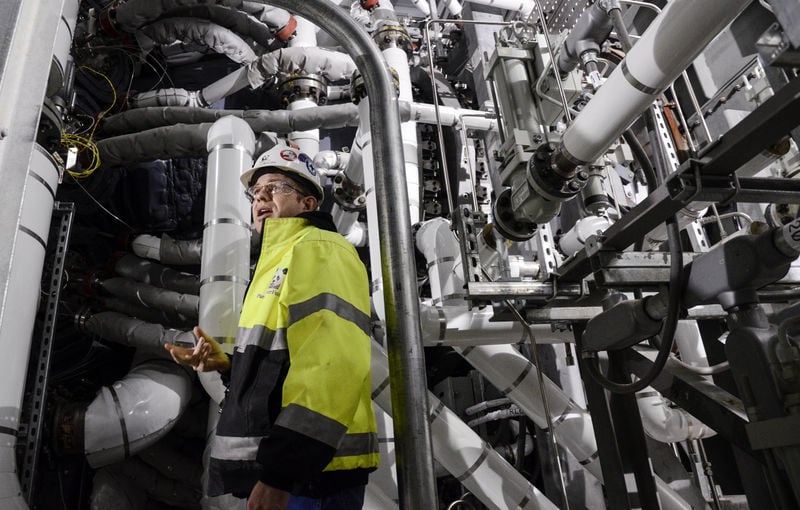 Panda Hummel Station construction manager Shannon Poulter stands aside one of three natural gas-powered combustion turbines at the plant. Each of the turbines operate at 350,000 horsepower. 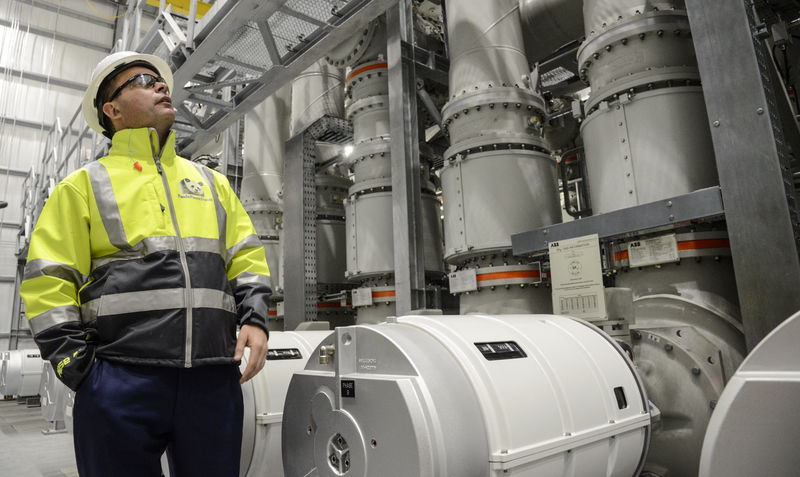 Robert Inglis/The Daily Item Electricity generated by the four turbines passes through a gas-insulated switchyard, seen here, contained inside a quiet, clean building and is fed 1,800 feet to the PPL interconnection to the PJM power grid. Panda Power Funds project manager Royce Stricklan talks about how the switchyard operates. 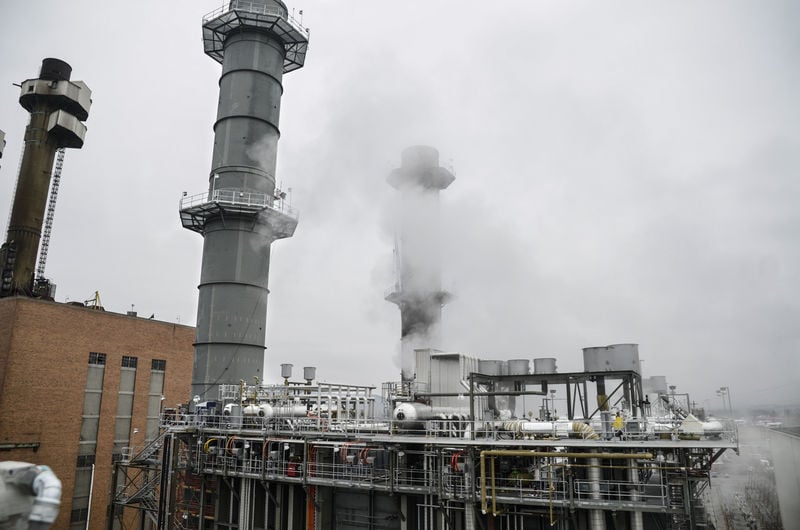 Robert Inglis/The Daily Item Steam rises from teh Panda Hummel Station power facility last month as they continue to work on bringing the facility toward completion.

The billion dollar plant is two months out from anticipated completion and full-time generation, creating enough electricity to power more than 1 million homes.

The first of three Siemens-built natural gas-powered units kicked on last week, known as “first fire.” All three units were simultaneously operating and synchronized to the power grid Wednesday before a steam valve malfunctioned, shutting one down. Engineers expect to make repairs and run all three together again today.

This type of testing is necessary to find and fix faults in the system before it is turned over from construction contractor Bechtel to Panda in May, three months off the original February target period.

Lines will be “blown” with high-velocity steam into the weekend to clear dust and debris. A restoration period of 10 to 18 days will follow, reattaching components removed for the cleaning. From there, the steam turbine — the fourth in the plant, powered by the waste heat from the combustion engines — will be prepped for operation.

Residents and passersby will take notice of the steam rising — water vapor, not smoke — and could hear some loud noises as the plant is made operational.

“Eventually at some point, we’ll have to test all the safety valves which will make some noise,” said Shannon Poulter, construction manager.

Construction on Panda Hummel Station began in August 2015. It replaces a coal-fired plant decommissioned in 2014. At a maximum 1,121 megawatts, it’s 180 percent more powerful than its 400-megawatt predecessor. The natural gas system comparably reduces hazardous air pollutants by 90 percent and even at a maximum of 6.2 million gallons a day, uses 97 percent less water for cooling purposes, according to Panda Power.

Bechtel is the lead construction contractor on the project working in consortium with Siemens Energy, the major equipment manufacturer. About 700 workers remain on site, down from a maximum 1,150. When it’s finished, Bechtel will turn the plant over to Panda Power. The plant is powered by a UGI Energy Services gas line, with gas extracted from the Marcellus Shale about 34 miles north. Thirty-five full-time employees will operate and maintain the plant. Stricklan said the operator positions all are filled.

The site will take up 20 acres of about 200 owned by Sunbury Generation, all designated by the state as a Keystone Opportunity Expansion Zone with tax incentives for developers. Sunbury Generation has a 30-year lease with Panda Power.

A cooling tower, the turbines, the boiler — everything operating in the plant — is monitored in a control room.

“The big number right here, we’re at 5 megawatts, basically a testing number,” Kastel said. “In the commissioning mode, we’re gathering data, tuning controls and getting everything squared away. It takes quite a while to get that all ironed out.

“The big goal is full power, emissions compliance, a nice and clean plant. … The numbers will be a lot larger, temperatures a lot hotter.”

Water from the Susquehanna River is used to cool the steam turbine condenser and the combustion turbines, as well as provide water to the three waste heat boilers which produce steam, powering the larger steam turbine.

The water is first treated at an on-site treatment plant, a shrunken version of the municipal plant in the City of Harrisburg, Stricklan said. It’s purified and pumped through the power plant. What doesn’t evaporate from the cooling tower is eventually cleaned again before being pumped back into the river.

“The water being put back in the river is in better quality than the water we remove,” Poulter said.

Weather patterns in the Northeast necessitated the three combustion engines be built indoors. Each turbine is fed by an 8-inch gas line at 600 to 800 psi. Residential lines are about an inch and are pressurized in the double-digits or lower, on average.

Electricity generated by the four turbines passes through a gas-insulated switchyard contained inside a quiet, clean building — compared to the traditional switchyards with overhead lines — and is fed 1,800 feet to the PPL interconnection to the PJM power grid.

Sold a day ahead

Inside the administration building, the electricity will be sold on a day-ahead basis, according to Michael D. Stahr, general manager of Panda Hummel Station.

“It’s all based on supply and demand,” Stahr said. “All the electricity that’s generated and put out on the system is being consumed as it’s produced.”

Plans for a neighboring power plant remain in early development by Sunbury Generation. The plant proposed for land adjacent to the Panda plant would be a competitor, not a partner.

“The projects that get built are the ones that get finances. Building is dependent on the market. We do believe the market will come around,” Meehan said.