An average of 42.75 percent of families in the Northumberland, Snyder, Union and Montour counties region struggle to pay bills and meet basic needs, according to a report released by United Way of Pennsylvania on Tuesday.

Before COVID-19 hit, almost 1.4 million Pennsylvania households were already one emergency away from financial ruin — a 10-year record high — setting the stage for the unprecedented economic impact of the crisis, according to the latest Asset Limited, Income Constrained, Employed (ALICE) Report. ALICE is an initiative of the Pennsylvania network of United Ways to raise awareness of the challenges faced by working families and to mobilize organizations and individuals who want to support strategies and policies that support ALICE along their journey to financial stability. 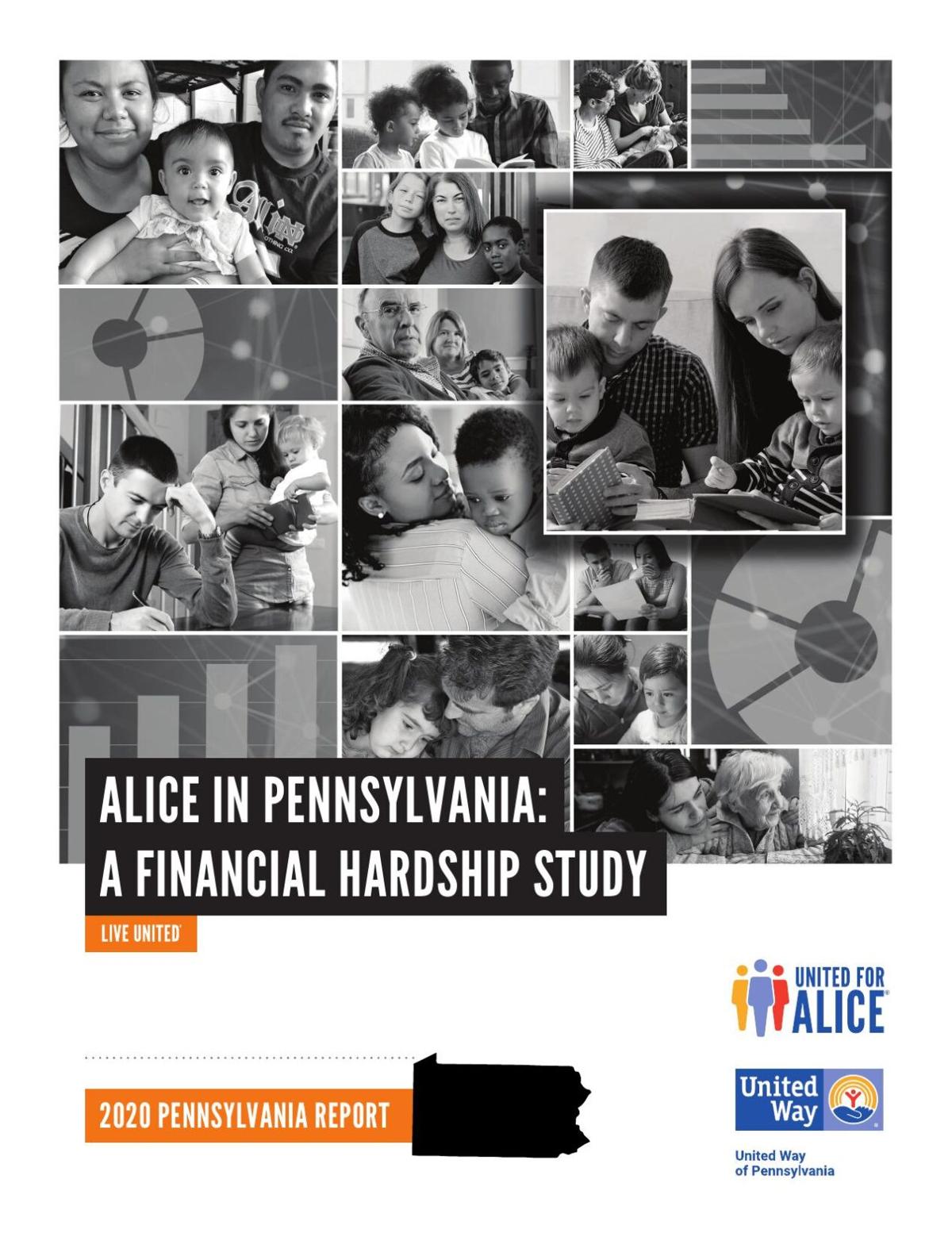 “The data is often surprising to people, especially when you see Union County with such a high proportion,” said Joanne Troutman, the president/CEO of the Greater Susquehanna Valley United Way, based in Sunbury. “You don’t often think about people who live in the margins. That population struggles to make ends meet and one crisis in their life can mean not paying their bills.”

In Union County, the cost of living is higher, so affordable housing is also higher, especially for families of four, she said.

The American Dream is not “so cut and dry” anymore, especially when the cost of living has gone up but salaries and wages have not, said Troutman.

One example is a person who is working in retail and offered a manager position with better pay. However, that person might have to decline the job promotion because then they would no longer receive child care assistance because they no longer qualify for assistance but can’t afford to not have child care, Troutman said.

Kristen Rotz, president of United Way of Pennsylvania, said in a Zoom presentation of the data that the workers praised during the pandemic are the ones who fall under the ALICE category.

“They’re working in grocery stores, in child care centers, as home health aides,” said Rotz. “They’ve been hailed as the heroes of the pandemic. We’re really pleased that for the first time broadly our communities are recognizing the importance ALICE plays every day to make sure our communities are what they are and we can all live the quality of life we all enjoy.”

Other ALICE workers in the hospitality and retail industry were hit hard. They were all struggling financially before the pandemic, said Rotz.

The data shows that 39 percent of Pennsylvania households in 2018 were struggling to survive.

“The survival budget we’re describing is not an aspirational budget,” said Rotz. “It truly only covers the absolute essentials for the household. There are no extras, there is no going out to eat. It focuses on a roof over your head, food on your table, some kind of health care for your family, and child care if you have children.”

“No matter how hard ALICE families worked over the last decade, the gap between their wages and the cost of basics kept widening. These already fragile ALICE households are now facing an even deeper financial hole due to COVID-19,” Rotz said.

United Way also conducted a statewide survey about the economic impacts of COVID-19 in August 2020 which found that ALICE households were more concerned about how to afford housing and related costs like utilities than they were about contracting COVID-19. ALICE households only had one month or less of savings to cover necessities, versus the rest of PA households who had two months or more.

Respondents also reported experiences with food insecurity, lack of internet access, concern for child care and distance learning and growing utility burden, according to the report.

“This data drives United Way’s policy priorities for a very important legislative session where our elected representatives’ decisions need to support recovery from the pandemic. The health and financial stability of ALICE workers and consumers has a multiplier effect that benefits local businesses, and our top priority is for Pennsylvania to join 30 other states that already have an Earned Income Tax Credit which will put earnings back in the pocket of working Pennsylvanians to help pay for things they need,” Rotz said.

United Way will also be advocating for rental and utility assistance to help families who are months behind on their bills, for state partnership and investment in PA 211 to continue to connect people in need to resources in their communities, and for increased access to high quality infant and toddler care which will be necessary to help ALICE families return to work.

“There’s a lot of work that United Way can and have done,” said Rotz. “It’s not just a United Way’s job, it’s everyone’s jobs to do what we can to support these ALICE families.”

Rotz said there is $852 million coming from the federal government to Pennsylvania for housing and utility assistance. State lawmakers should be challenged to focus on individual economic recovery as much as business recovery.

“The report helps inform local programs and policies,” said Troutman. “From a practical perspective, we are looking very hard at issues with transportation and child care. Those are two core areas we have concrete proposals.”

The Greater Susquehanna Valley United Way saw ALICE and other struggling families highlighted since March during food and mask giveaways. They also worked with local partners to set up Wi-Fi hotspots around the Valley.