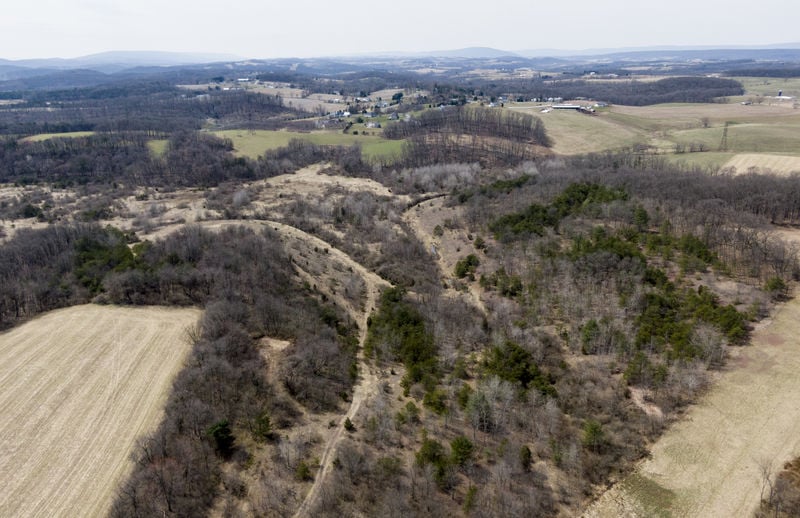 Robert Inglis/The Daily Item An aerial view of a section of the Northern Ash Basin that the CSVT is now going to go around rather than through. 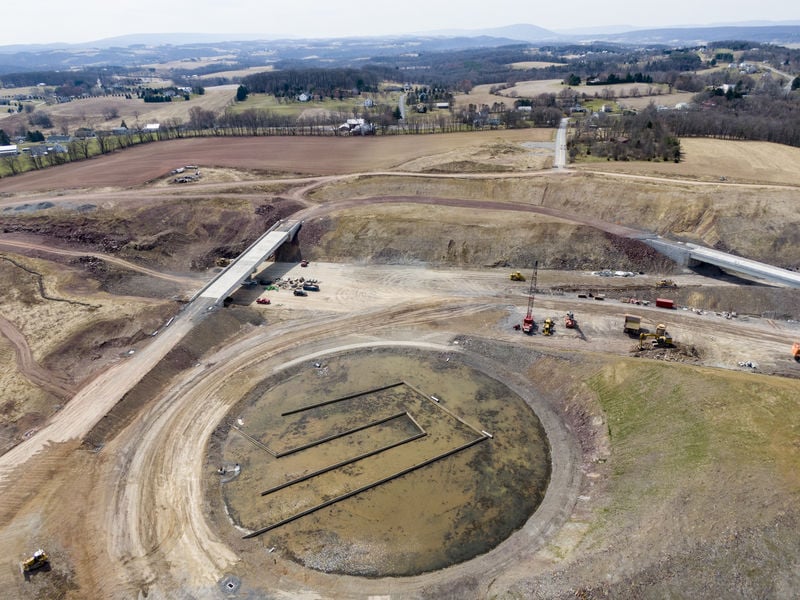 Robert Inglis/The Daily Item An aerial view of a section of the Northern Ash Basin that the CSVT is now going to go around rather than through.

SHAMOKIN DAM — The revised southern Central Susquehanna Valley Thruway route around, rather than over, two ash basins located west of Route 15, has received federal environmental clearance. The new route was found to have no significant environmental impact on the surrounding residences, farmland, and wetlands, according to a recently released Environmental Impact Study (EIS).

Before any road project  — and certainly one of this magnitude — is greenlighted, said Pennsylvania Department of Transportation assistant plans engineer Matthew Beck, "we've already established the need for the project, what the specific transportation problems are that the project is meant to address, and the alternatives to meet those needs. We look at how those alternatives will impact all aspects of the environment. That includes natural resources like streams, wetlands, flood plain, wildlife. It also includes cultural resources like historic properties and archaeological sites.

"We look at socio-economic impacts like residences, noise levels, farmland and businesses," he explained.

It has been a tremendous undertaking, Beck said.

One of the early challenges to building the southern section of CSVT were the two ash basins. PennDOT engineers identified unexpected conditions in the two fly ash waste basins that CSVT was previously proposed to cross.

These conditions raised significant engineering and environmental risks that required CSVT to be moved off the basins.

Environmental consultant MIke Molesevich, of Lewisburg, who was involved in environmental testing at the ash basin in 2004, described it as "a small lake, a small dam that was created in order to dispose of the ashes that were created at the Shamokin Dam Power Plant, after coal was burned in order to help make electricity."

You burn coal and one of the after affects is ashes, he said. If you burn a lot of coal, you create a lot of ashes.

"And PPL had two ash basins just west of the power plant. They were like small lakes, basically a depression area, with a dam across it," Molesevich said. "They had a permit to do that, under the guise of the Department of Environmental Protection. They continued to dispose of their ashes  there until it was either full or they closed the power plant."

Emphasizing that he had no data, nor had he the chance to sit down with a PennDOT engineer, Molesevich said the ash basins, "structurally, would not be stable. I learned it is not natural native soil, nor is it structurally stable such that you would get when you build on bedrock. It was basically a landfill for coal ash.  Anyone in the area who burns coal for heating knows the reality of coal ash."

One way to have gone over the ash basin, he said, was to straddle it, like going over a river. "But I understand their decision. I guess once they started doing their geo-technical borings they concluded that this stuff was pretty soft."

That's exactly what happened, according to the Environmental Impact Study posted by PennDOT on www.CSVT.org. Engineers found that there was no lining between the ash and the original ground surface below it.

Geotechnical studies found that the ash from within 10 feet of the surface to the bottom of the basins has the consistency of a milkshake or toothpaste.

Endangered species at the ash basin

The EIS of the ash basin area also reported that construction would jeopardize, but not threaten the existence of the northern long-earred bat, an endangered species.

The northern long earred bat, explained Bucknell professor of biology, Ken Field, is being affected by white nose syndrome. "Because the species is being wiped out by that disease," he said Tuesday, "biologists are trying to protect it so that the very few that might survive have a better chance of recovering from that disease. We're trying to minimize the impact of anything on it."

Northern long-earred bats are not very common in this area, Field explained. They are more rare than the little brown bat, which used to be very common around here before white nose disease.

"Those who did the EIS," he said, "are required by the Endangered Species Act to document any endangered species that could be affected by their work [the CSVT] and the only two bats that are endangered in Pennsylvania are the Indiana bat, which is very rare here, and the northern long-earred bat."

That is why the EIS focused on those two species; because they are so rare.

"If there was a roost they identified that was in the impacted area," Field noted, "they would have to identify how they would mitigate that.

The report said a "capture study" was conducted and found no northern long-earred bats in the area, and that allowed PennDOT to say they were not worried about a roost or a hybernacula area while the CSVT work is being done.

Groundwater is one of the resources that PennDOT assesses and potential impacts are monitored, Beck said.

"Folks' ability to have clean and safe drinking water is one of our utmost concerns," Beck explained. "Anytime that we do major earth-moving that involves blasting, in advance of that construction work we sample private wells. We also sample surface waters in the area where we anticipate to have work, to get a baseline of the condition of the quality and quantity of water in their wells, and quality of water in their streams. So that as the construction proceeds we can keep monitoring and see if the construction has an impact."

In general, Beck said, "the impacts that we see to groundwater during major earth-moving like we've seen with CSVT is typically temporary. Water conditions might fluctuate for a short period of time immediately after a blasting, or pile driving is completed. Typically, conditions will return to normal after some amount of time.

PennDOT, earlier this year,  got the federal environmental clearance to say that the route around the ash basin is selected, "and that allows us to move forward with final design, acquiring right of way, moving utilities, and getting permits in place," Beck said.

There is no work planned to start in the ash basin for several years, until we get those activities complete.

"We now anticipate the construction for the southern section, and that includes the part around the ash basin, will start in 2022," Beck said.

That is the timeline.

Meanwhile, Molesevich said, "My main concern, is that are we going to have another surge of development around the interchanges and especially in those municipalities that have no zoning."

This could create more sprawl than what created this problem in the first place, in Shamokin Dam and Monroe Township, Molesevich said. "That concerns me, whether in Union Township, Union County or on the other side of the river. Is the development going to happen? Yes, but let's make sure it is done wisely, soundly, properly, and not just scattered and create more problems similar to the ones the highway was supposed to alleviate."